Some of Australia’s leading media companies have apologised after pleading guilty to contempt of court over the way they first reported Cardinal George Pell’s conviction on child sexual abuse charges.

Fourteen news outlets, including The Age and The Sydney Morning Herald, have admitted to a combined 21 charges of breaching a suppression order after publishing and broadcasting reports in December 2018. 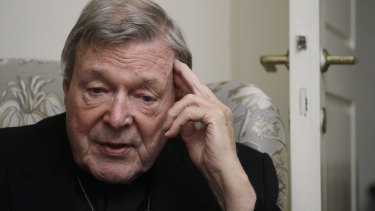 The reports did not name Cardinal Pell but said a high-profile person had been found guilty of criminal charges.

The reports used information derived from Cardinal Pell’s first trial and this contravened the suppression order set by County Court Chief Judge Peter Kidd. Cardinal Pell was awaiting a second trial at the time but that trial was ultimately aborted by prosecutors.

Cardinal Pell last year had his convictions quashed and was released from prison following a successful appeal to the High Court.

Lawyers for the media on Wednesday told the Supreme Court their clients offered sincere, unqualified apologies to the courts and Judge Kidd for the breaches.

Will Houghton, QC, representing some News Corp publications, said the breach was unusual in that it was not based on a production mistake or a “[Derryn] Hinch-like” deliberate action, but came after careful consideration among senior editorial staff and media lawyers before publication, based on the view at the time that the reports complied with the order.

“It wasn’t carelessness, it wasn’t inadvertence. It was a conscious and deliberate decision made … to publish those articles in the honest belief that those articles did not breach the suppression order,” Mr Houghton said. “They now know to the contrary.”

Matt Collins, QC, representing The Age, The Sydney Morning Herald and others, also confirmed his clients offered an unqualified apology.

The Age published the first of the offending reports, an online article published at 7.11pm on December 12, 2018, which came about 27 hours after the jury found Cardinal Pell guilty.

The Age, The Sydney Morning Herald, Sydney’s The Daily Telegraph and The Courier Mail all published newspaper stories the following day, and The Australian Financial Review published a hard-copy article the next day.

Other news outlets published online articles, while Channel Nine (owned by Nine, which also owns this masthead) and radio station 2GB broadcast short reports on the morning of December 13, 2018.

The corporate media companies last week pleaded guilty after prosecutors agreed to drop a further 58 contempt charges, 46 of them against individual journalists. The agreement brought to an end a trial that began last year.

Prosecutors are seeking convictions and fines against the media, but the penalties will be up to Justice John Dixon.

Mr Houghton said the media had offered to bear the $650,000 cost of the prosecution’s case. The plea hearing is expected to continue into Thursday.

Catch all the day’s headlines

At the end of each day, we’ll send you the most important breaking news headlines, evening entertainment ideas and a long read to enjoy.  Sign up to The Sydney Morning Herald’s newsletter here, The Age’s here, Brisbane Times’ here, and WAtoday’s here.