Meet the next Mr Big in the criminal underworld: He’s known as Mr Blonde

After the Australian Federal Police unveiled its extraordinary organised crime take-down this week, there was one question on the lips of most experienced state and federal police officers: who will fill the breach? The answer of many senior officials is the same: Mr Blonde.

Named after the sadistic gangster from the film Reservoir Dogs, the Mr Blonde syndicate has, according to multiple sources in state and federal agencies, emerged as a significant international drug trafficking enterprise targeting Australia. Early indications are that the federal police’s Operation Ironside, which led to hundreds of arrests and raids across the globe on Tuesday, has not badly damaged Mr Blonde’s capabilities. 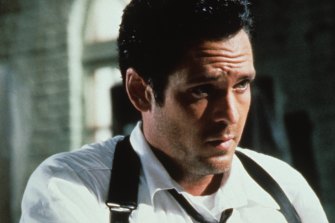 Operation Ironside’s investigators infiltrated the An0m encrypted messaging app, which allowed them to covertly read the communications of crime bosses such as Australia’s most wanted man, Hakan Ayik. Mr Blonde and his associates were instead using Ciphr, another encrypted communications platform that appears to have escaped Ironside’s reach.

Even state police, who rarely embrace the successes of their federal counterparts but whose officers played a key role in Ironside’s arrest phase, have acknowledged this week the impact of Ironside in destabilising and, in many cases, dismantling the entrenched criminal networks led by Ayik and other long-standing crime bosses.

But both state and federal investigators, speaking anonymously because they are not authorised to comment, say Mr Blonde potentially looms as even more resilient as detectives expend considerable resources locking up members of the crime cells exposed by Ironside.

This is the reality of modern organised crime. Ironside’s success was due to ingenuity by law enforcement rather than any additional government resourcing or any meaningful change in the drug demand-supply equation that makes Australia’s one of the most profitable drug markets in the world.

On July 7 last year, on a brisk morning on the outskirts of Brisbane, police pulled over a car in what appeared to be a random traffic stop. Inside they discovered $1.75 million in cash packed into a suitcase. A further $2.61 million was stuffed in a cardboard box. The man driving the car was, according to investigators’ suspicions, a mere mule. He was not the only one.

Across Australia, several dirty cash runners were identified as being part of the same money-smuggling operation. Its modus operandi could have been scripted in Hollywood. Before a run, couriers were posted Samsung phones stripped down and loaded up with Ciphr hardware intended to make the phones impossible to tap. They also included a self-destruct application that enabled the devices to be remotely wiped.

Policing sources who cannot speak publicly say the courier would receive messages on the encrypted phone directing them to a dead-drop location. There, hidden in a park or a storm water tunnel in suitcases or boxes, was a bundle of cash. Next would come a message with directions about where the money was to be delivered. 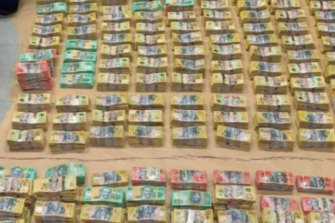 More than $4 million cash seized in a raid in Brisbane last November.

Even if the couriers were arrested, the most they could give up was a wiped encrypted device and an intriguing story about a Ciphr moniker: Mr Blonde.

Source briefings and extensive searches of public records and court cases by The Age and The Sydney Morning Herald suggest Mr Blonde is an Australian, most likely based offshore.

Mr Blonde is also believed to be in touch with members of the Aussie Cartel, identified this week by the chief executive of the Australian Criminal Intelligence Commission, Michael Phelan, as the most prolific drug-trafficking organisation attacking Australia. The cartel’s members include those effectively shut down or badly destabilised by Ironside, including Turkish based Hakan Ayik and Hakan Arif.

But other Aussie Cartel members and their associates, including bikie-linked Mark Buddle and Marco Coffen, while weakened, are still operative. Police intelligence suggests Coffen was still busy distributing Ciphr phones in Australia as Ayik was peddling the An0m devices at the heart of Operation Ironside.

The execution of Operation Ironside would not have happened without the resolve of a cop regarded as an accidental Assistant Commissioner. Nigel Ryan’s understated style belies intelligence and integrity. According to colleagues, in a profession where arse-covering usually increases with one’s rank, Ryan also has an unusual appetite for risk.

Early in his career, Ryan was the AFP’s first undercover officer deployed overseas, where he put his life on the line to play a drug dealer in a buy-bust operation in Europe. Later, he was deployed to the Northern Territory to investigate high-level police corruption. After this, he was appointed to head the AFP’s internal affairs unit, an unpopular job that, if done well, guarantees powerful enemies.

Ryan left with more than a few. His focus and his uninterest in playing politics led to his appointment as AFP Commissioner Reece Kershaw’s first chief of staff in 2019 and, next, as the AFP’s top organised crime fighter.

Ryan made his brief clear: he wanted to innovate and have impact despite the AFP’s limited resources. This meant attacking the infrastructure of organise crime, rather than just locking up the odd Mr Big. During the two and half years the AFP was secretly controlling the An0m phone network, the agency hoovered up millions of ostensibly encrypted messages and used data crunching to analyse them. 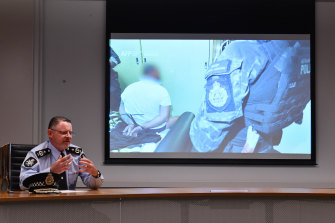 It was not without risk. At times, Ryan had to make the call to let some organised crime plots unfold, rather than move in and expose the police operation. Had something terrible and potentially preventable occurred while the AFP were monitoring the phones, policing sources say Ryan would have faced the consequences. He was also challenging the timid, risk-averse culture of the AFP. Ryan argued the reward justified the risk. It paid off.

Taking over An0m had, by one official’s estimate, the effect of having an extra 300 detectives running dozens of high-level informers. For 18 months, the AFP had greater visibility into Australia’s underworld than ever before. Multiple crime cells have been wiped out and the Aussie Cartel’s most dangerous member, Hakan Ayik, is, according to one senior investigator, finished, considering his key role in distributing hundreds of An0m phones at the same time police were monitoring them.

“The Italians have likely already put out a contract on [Ayik’s] life. They will want to send the message that if you give the mafia technology that is compromised, you will pay with your life,” the source says.

Yet the key technological enabler of Operation Ironside is now closed. With the expiry of the warrants that permitted the takeover of An0m and the decision of police to make arrests, conduct raids and carry out a carefully planned media strategy, Ryan’s extraordinary gambit is no more.

Meanwhile the infrastructure of organised crime remains in place. Ciphr phones are still in use, albeit in falling numbers.

The Hells Angels have recently been spruiking a new encrypted device called Diamond Secure. Criminal organisations still have trusted insiders working at ports and airports, including inside Qantas.

The arrest this week of a Sydney Airport contractor for allegedly facilitating a drug importation will not dent the trusted insider networks still in operation, police sources say.

The Aussie Cartel that sat at the top of the organised crime tree may be splintering, yet some of its members will continue their activities.

As Assistant Commissioner Ryan plots his next innovation, Mr Blonde is likely planning his next importation.