‘It was MY fault’: Meghan Markle’s half-sister takes the blame for her father’s staged paparazzi photos saying SHE suggested it ‘for the benefit of the royal family’

Meghan Markle’s half-sister says her father ‘staged’ paparazzi photos on her say-so and insists it was all for the benefit of the royal family – not to rake in cash before the wedding.

Samantha Markle has claimed it was her idea for Thomas Markle to be photographed in a series of royal wedding shoots where he lives in Mexico – including surfing the net for pictures of the couple and apparently being measured for a suit.

But she claims that it was all to paint him – and Harry and Meghan – in a ‘positive’ light before he walks his daughter down the aisle at St George’s Chapel, Windsor, on Saturday.

The Mail on Sunday claims that together with other pictures taken with his co-operation, they will have netted up to £100,000, but Samantha insists it wasn’t done for money.

She tweeted the official Kensington Palace Twitter account and said: ‘The bad press over my father doing staged photos is my fault. The media was unfairly making him look bad so I suggested he do positive photos for his benefit and the benefit of the royal family. We had no idea he would be taken advantage of. It was not for money’.

Her father will still give his daughter away on Saturday – despite the revelations. Samantha Markle, pictured with her famous half-sister in 2008, has said it’s her fault their father agreed to appear in staged photos on the eve of the royal wedding 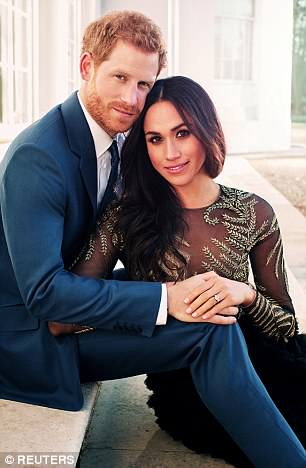 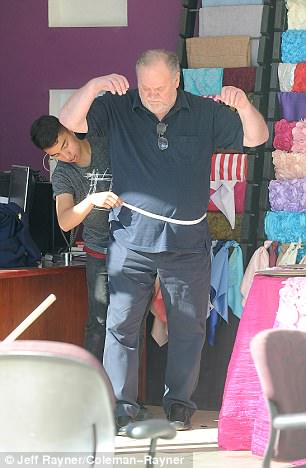 Samantha Markle said it was her idea for Thomas Markle to be photographed in a series of royal wedding shoots where he lives in Mexico. 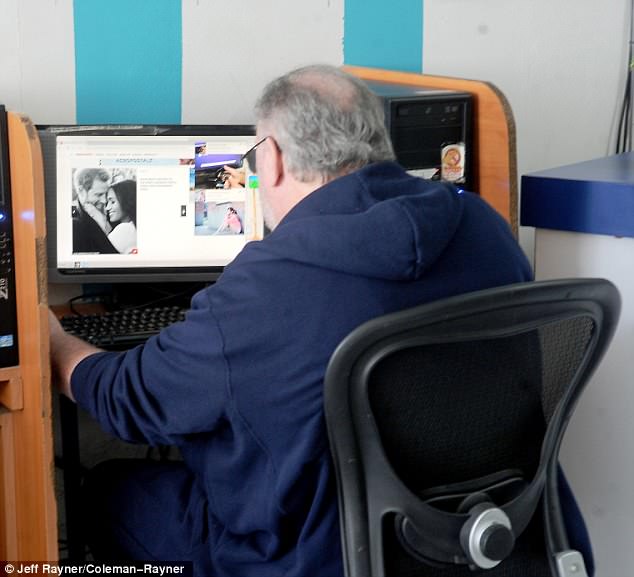 Thomas Markle appears to have agreed to pose up for a photographer in a deal that coul dhave netted him up to $100,000, including this one in an internet cafe looking at photos of Harry and his daughter

Last night Kensington Palace was silent about claims that Meghan Markle’s father had secretly collaborated to stage a series of ‘faked’ photographs in the run-up to the royal wedding.

The palace refused to comment on the allegations, but it is understood there is no change to plans for Mr Markle to walk the bride down the aisle of St George’s Chapel on Saturday.

Both Prince Harry and Miss Markle however, are likely to be embarrassed by the revelations that Mr Markle secretly posed for pictures showing him being ‘measured’ for his wedding suit and browsing articles about his daughter and the Queen’s grandson in an internet cafe.

Yesterday The Mail on Sunday reported that Mr Markle, 73, an award-winning former Hollywood lighting director who now lives a reclusive life in Mexico, had worked with US-based photographer, Jeff Rayner, to set up the lucrative photo deal.

It is not known whether Mr Markle was paid for his involvement.

The disclosure came after warnings to the media from Kensington Palace about alleged harassment by photographers of both Miss Markle’s parents. 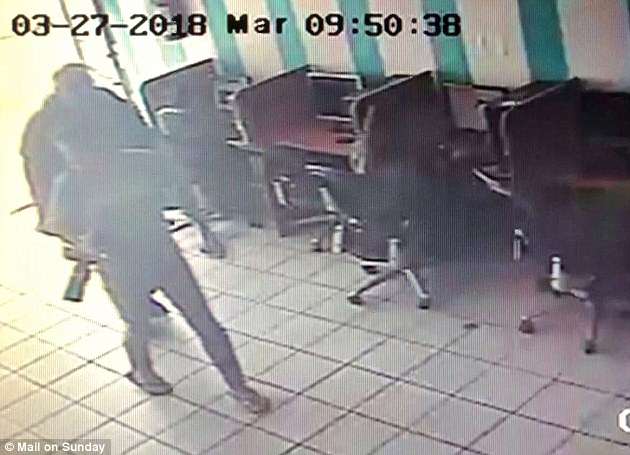 Photographer Jeff Rayner, camera slung over his shoulder, arrives at the Omega internet cafe at 9.50am on March 27 with Thomas Markle, it emerged on Sunday 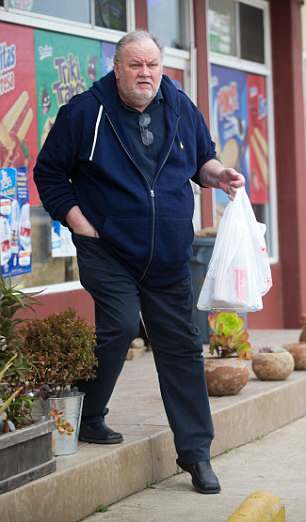 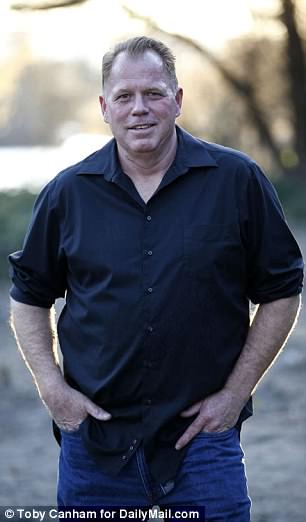 Thomas Markle’s son (left), Thomas Jr (right), has said his father plans to apologise to Meghan Markle for the stunt that has left him and his family ‘deeply embarrassed’

Privately there was some concern last night over Mr Markle’s ability to cope with the pressure of this week’s royal wedding.

It is understood that he has long ‘struggled’ to handle the immense global interest in his daughter’s romance. And he is said to be feeling ‘significant stress’ about this week’s events, which will see him travel to the UK, take tea with the Queen and meet up with Meghan’s mother, his ex-wife Doria Ragland.

Samantha Markle, who is estranged from her Suits star sibling, has previously called for Prince Harry to ‘man up’.

There has been a bitter row because Meghan and Harry haven’t invited her and her brother.

She accused the Queen’s grandson of rank hypocrisy in offering ‘shout outs about humanitarianism’ while allowing ‘Meg to ignore the Markles’.

‘Someone must point out that the ‘Emperor is not wearing any clothes’,’ the 53-year-old raged.

The royal bride to be has suffered a number of embarrassments at the hands of her dysfunctional family yesterday.

Her estranged half-brother branded her a ‘phoney Diana’ and wrote an open letter to Harry saying it’s not ‘too late’ for him to call off the wedding. 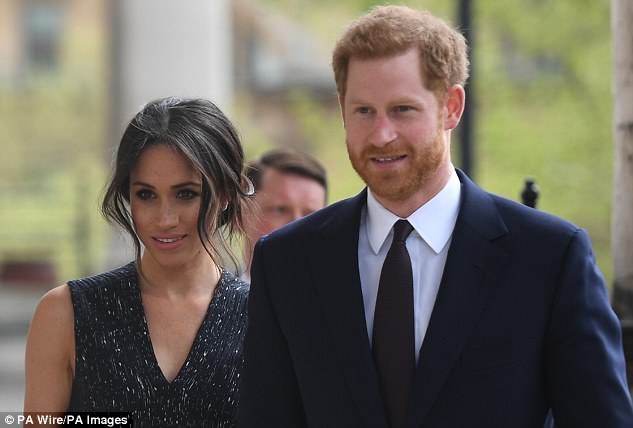 Prince Harry and Meghan Markle will marry on Saturday, May 19, in Windsor

Thomas Markle Junior, who shares the same father as the former actress, hit out at his sibling for failing to invite himself and other relatives to next month’s royal wedding, claiming she had turned her back on them in her quest for fame.

Thomas Markle Junior, 51, is 15 years older than his famous half-sister and lives in Grant’s Pass, Oregon, where he has worked as a glazer.

He is the product of his father’s first marriage to Roslyn Markle, who was married to him for seven years before he met Meghan’s mother, Doria Ragland.

When news of her romance with the fifth in line to the throne broke in autumn 2016, Markle Junior was fiercely protective of his half-sister, whom he hasn’t seen since 2011, in the face of vitriolic attacks from their sibling Samantha.

Samantha branded Miss Markle as the ‘real princess pushy’ [a reference to the nickname given to the sometimes imperious Princess Michael of Kent, who is married to the Queen’s cousin] and accused her of failing to support their father who had been forced to file for bankruptcy after years as a successful Hollywood lighting director.

Markle Junior claims – somewhat ironically, many might think, give the litany of family feuds – that his sister’s relationship with Harry has left an irrevocable rift between many of her relatives.

More damagingly, he has also accused Miss Markle, 36, of portraying a ‘false image’ of herself and trying to reinvent herself as the ‘new Princess Diana’.

Speaking to the Daily Mirror, he said: ‘Meg likes to portray herself as a humanitarian, a people’s person and a charitable person but she is none of those things to her family.

‘She is giving the greatest performance of her life. She is acting phoney. Once she got into Hollywood she turned into a different person. She’s clearly forgotten her roots and her family.

‘There’s a whole different side to her that has started to surface and it’s ugly to see.

‘I’ve read that Meg wants to be like Diana. Diana was worshipped by everyone in the world. She was loved for the right reasons.

‘That’s what Meg wants to happen, but I don’t think it’s going to happen. She’s not genuine like Diana.’ Markle Junior, a father-of-two who was last year arrested after a domestic incident with his fiancée, which saw him accused of drunkenly pulling a gun on her, has not spoken to Miss Markle for seven years but says he still would have expected an invitation to her wedding.

He seizes on the fact that 600 guests have been invited to attend the wedding at St George’s Chapel in May 19, and a further 2,500 member of the public to watch proceedings from the Windsor Castle grounds.

‘She’s forgotten her flesh and blood,’ he told the newspaper.

Standing room only! Meghan and Harry’s wedding feast will NOT be a seated affair as it’s revealed trendy ‘bowl food’ will be served as guests mingle

Prince Harry and Meghan Markle will not have a sitdown wedding breakfast after their ceremony on Saturday – but have plumped for trendy ‘bowl food’ instead.

Their 600 guests will be standing up in St George’s Hall at Windsor Castle when they are served seasonal ‘mini main courses’, made by the Queen’s kitchen staff and presented to them by liveried waiters and waitresses.

Bowl food has become a popular choice for business events because it is more sociable, allowing guests to mingle and network while eating.

However, it is a somewhat more surprising choice for a royal wedding. 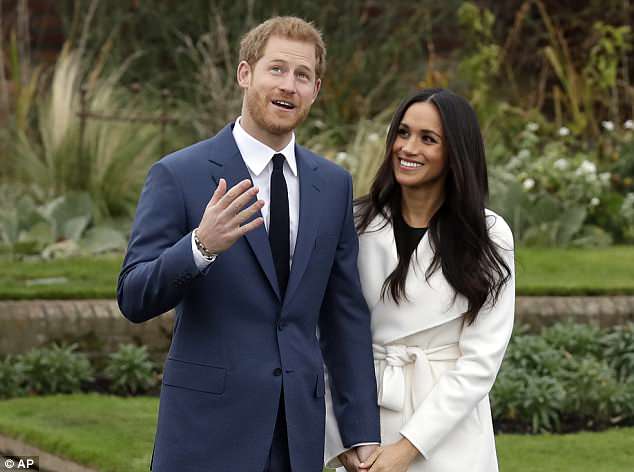 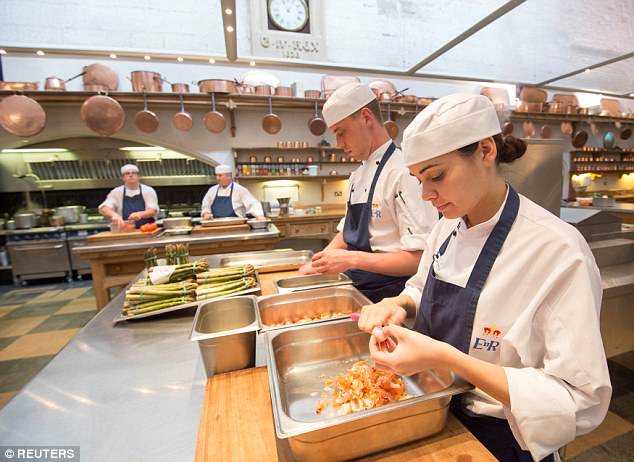 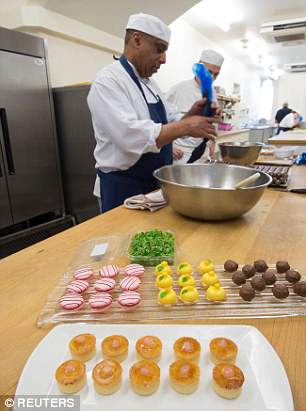 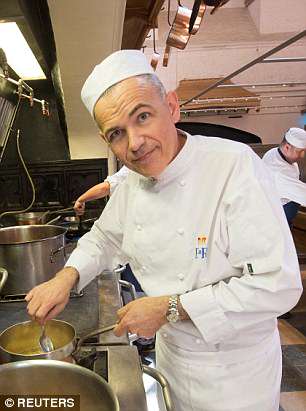 Still, Harry and Meghan hope that it will make the occasion less fussy and allow them to move around the room greeting as many guests as possible.

Guests will also feast on canapes during the lunchtime reception, which will last around two and a half hours and includes speeches and cutting of the cake. Each morsel has been crafted to be consumed in just two delicate bites.

The Queen is officially hosting the event and Buckingham Palace staff revealed that the menu would comprise ‘classic dishes’ made from seasonal British produce, much from the monarch’s own estates.

Harry and his bride-to-be have tasted and selected their wedding reception menu.

The couple apparently visited Windsor Castle to sample menu suggestions in the Great Kitchen, which dates from the reign of the 14th century monarch Edward III.

It is believed to be the oldest working kitchen in the country, having served more than 30 monarchs.

Royal chef Mark Flanagan is leading the 30-strong catering team and said: ‘The day of the wedding has fallen very kindly for us.

‘All the British vegetables are just coming into season… and that’s been a point of focus for us.

‘We know the couple wanted us to make sure we used all of the local seasonal produce as much as possible throughout their menu, and this recent good weather is really helping us to achieve that.’

He added the couple have ‘been involved in every detail’.

Meghan is a keen ‘foodie’ who used to run her own lifestyle website, which featured her favourite recipes and restaurants. She also shares a love of organic produce with her future father-in-law, Prince Charles.

Mr Flanagan would not discuss the dishes in detail but produce such as asparagus, peas and tomatoes are in season, providing a wealth of options for the chef, who has worked with some of the world’s best, including Michel and Albert Roux.

He added: ‘There’s no experimentation on Saturday whatsoever, tried and tested and predominantly classics.’ Over the next few days staff will start washing and peeling vegetables, so they can save time for presentation, Mr Flanagan said.

A separate dinner for 200 is being held at Frogmore House by the Prince of Wales later in the evening.