A mental health nurse who lost her unborn born baby after a furious row with airport officials over a routine bag search has been cleared of wrongdoing after a ‘joke’ two-year courtroom ordeal.

Heidi Mullis, 32, of Woolton, Liverpool, was charged with assault and using threatening behaviour after claims she used the F-word and tied her blonde hair back as is if ready to fight’ when she and her family were stopped at passport control.

At the time, Ms Mullis was six weeks pregnant and scrambling to return to Britain after a two-week holiday in Bali with her partner, Michael Legros, 31, and four children at the onset of the Covid pandemic in March 2020.

Her youngest child had come down with a mystery illness, and an argument broke out between herself and Border Force officials at Manchester Airport after she feared her family were starting to display Covid symptoms.

The family were eventually allowed on their way before the child was rushed by ambulance to hospital but Miss Mullis, who works in the intensive care unit at a psychiatric hospital, was subsequently quizzed by police.

She was initially charged with assaulting an emergency worker – a charge which fetches a maximum 12 month in jail – and a public order offence and faced six different court hearings including an appearance in front of a crown court judge before the charges were reduced to one of disorderly conduct which has a maximum penalty of a £1,000 fine.

This week at Tameside magistrates court Miss Mullis was cleared of the charge after her lawyer accused prosecutors of mounting a ‘bogus’ case against her which he dismissed as a ‘joke.’ She lost her unborn baby following the incident. 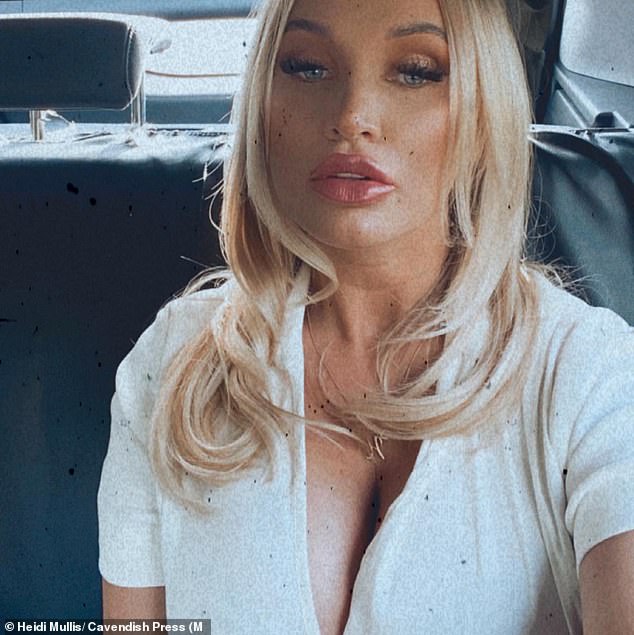 Heidi Mullis, 32, of Woolton, Liverpool, was charged with assault and using threatening behaviour after claims she used the F-word and tied her blonde hair back as is if ready to fight’ when she and her family were stopped at passport control in Manchester Airport

Ms Mullis, who was pregnant at the time of the incident in March 2020, lost her baby after the ordeal 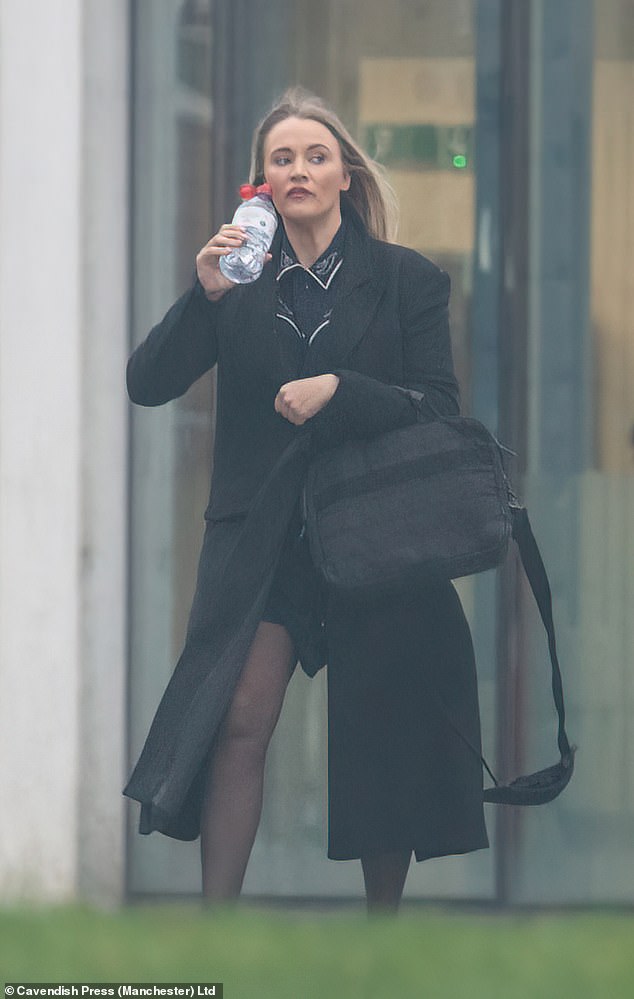 Heidi Mullis had been on holiday with her partner Michael Legros, 31, and their four children in Bali and were scrambling to get back to Britain as the country was due to go into the first lockdown in March 2020

The bust-up occurred on March 24 2020 as Miss Mullis and her family landed at Terminal One.

Border Force Officer Kelly Clarke told the hearing: ‘I came into contact with her partner to do with an examination of his bag. I handed five passports to the defendant but kept the passport of the male. While dealing with him, she became very angry. I suggested she go outside and take her children with her as I did not think it was a place for children to be.

‘But I could tell she was angry from her tone, from the way she was moving around, her language and she kept coming towards me. She also tied her hair back and I thought she was doing this so her hair couldn’t be grabbed in a fight.

‘My interpretation was it was going to get very volatile. I was aware there were four children present and we would have to have had to search every single suitcase.

‘She said, “why would I want to go out when you have my f***ing man here?” She was screaming and stood about one metre away and moving back and forth.. I did not like the language she was using in front of her children.

‘It was impossible to have a chat with her. She told me to basically f*** off.’

Fellow Border Force Officer Assad Negori said: ‘Her behaviour was very angry, both of them were very angry and showing signs of aggression. She made me feel nervous and on edge that something could happen. I can recall her swearing.’

Prosecutor Dave Holland said: ‘She became frustrated with staff and her frustrations boiled over.

‘It was not a particularly protracted incident but a serious one nonetheless. There is no reason for the officers not to be telling the truth. She has a clear reason to lie.’

Ms Mullis said she and her family had spent two weeks in Bali at the onset of the Covid pandemic in March 2020, and planned to rush back home after hearing ‘horror stories’ of shops suffering with shortages.

Explaining her behaviour at the airport, she told justices: ‘My back was sick and I did not know what it was and I didn’t want their staff around my child.

‘There were a lot of emergency flights that week, my child was unwell and we had just got off a 20 hour journey. I just wanted to get home – it was meant to be a holiday of a lifetime, but it was a nightmare by the end of it.

‘Going through custom is never straightforward. I was apprehensive about my son and I wanted to get out of the airport and when staff intervened, that was the last thing we wanted. 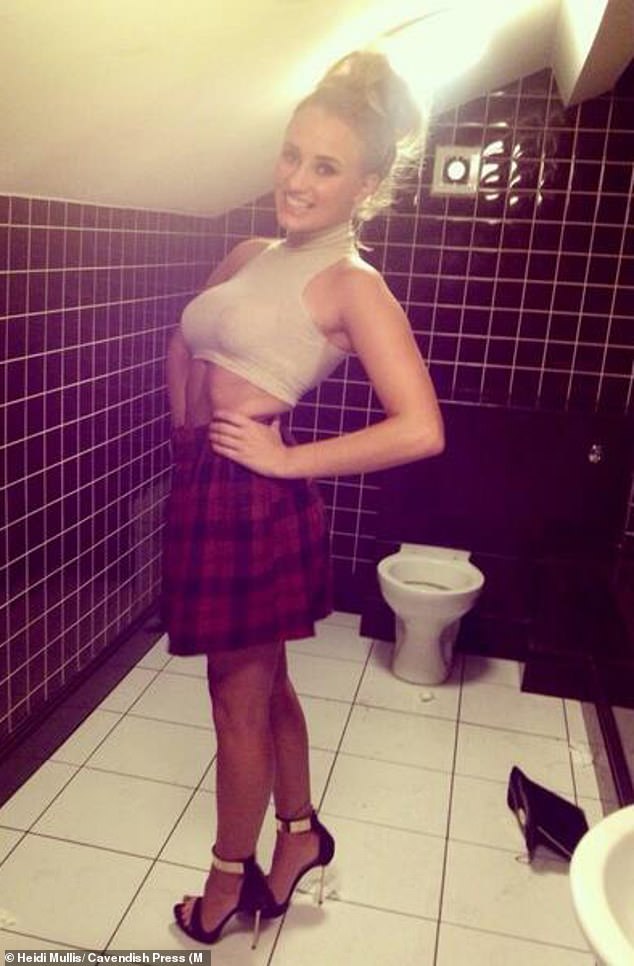 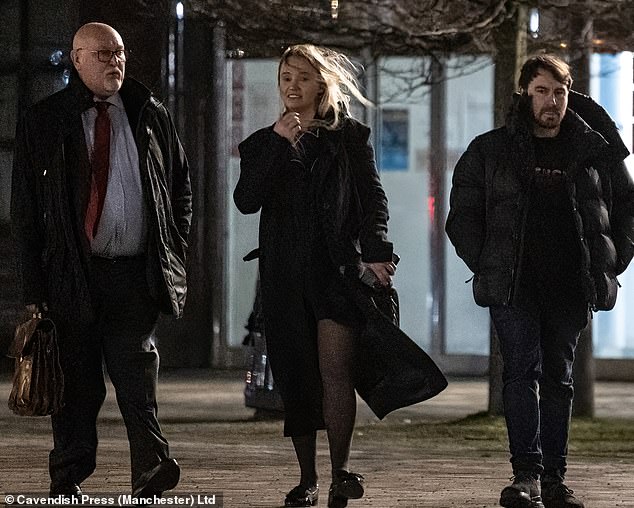 Ms Mullis’ lawyer described the proceedings as ‘bogus’ and a ‘joke’ after the case was quashed. Pictured: Heidi Mullis with lawyer Brian Jackson (left) and partner Michael Legros outside Tameside Magistrates’ Court

‘But I was not aggressive. I work in pressure cooker situations, and I have to keep calm. I never shouted, screamed, or swore at the customs officer. I was six weeks pregnant at the time and I ended up losing that child.

‘The only reason I put my hair up was it was really hot. I was flustered and hungry and six weeks pregnant. I have never punched someone in the face in my life and I never thought me putting my hair up could have been considered to be aggressive.

‘Getting a criminal conviction means that I lose my job. It is my job to remain calm and patient and I am a good nurse. I have glowing references from all of my managers.

‘I have been spat at at work and I have never retaliated – I would never put my job on the line. This was a fabricated story.’

Her lawyer Brian Jackson said: ‘There has never been a situation in my work where I have heard the prosecution say their witnesses have no reason to lie so they should be believed. It just goes to show how bogus the prosecution case is.

‘She is a responsible member of society and has no previous convictions. Why would she behave in this way?

‘She is well thought of as a community mental health nurse. She was six weeks pregnant at the time and had a child which she thought could have had COVID. It just does not hold together. Frankly, this whole prosecution case is a joke and I have no idea why it has been persisted with.’

Dismissing the case JP Veronica Heap said: ‘In our valuation, we found Miss Clarke and Mr Negori to be very credible and reliable witnesses.

‘But we also found Miss Mullis to be a very credible witness and we believe this did not constitute to causing harassment, alarm or distress.’