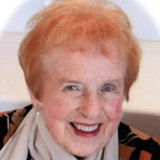 She wrote brilliantly about her childhood years in her book My Paddock, published in 1994. The title of her earlier book, When The Whistle Blew: A Social History of The Town of Sunshine 1920-1950, published 1989, reflected her experience of growing up in Sunshine, amid the whistles of factories and steam trains.

The Hyetts were a large clan in Sunshine. Prue’s grandfather Jacob Hyett and his family were part of that remarkable migration of H.V. McKay and his workers from Ballarat to Sunshine and Footscray in the early 20th century. Prue’s mother was a schoolteacher, born in New Zealand, who met and married Jacob Hyett while he was working there as a miner. She was descended from Irish settlers while his ancestors were Irish convicts. The young couple moved to Sunshine in 1922 and bought a cottage in First Avenue, near Wright Street. Jacob worked at Darlings’ Flour Mill in the early 1920s and then at McKay’s Sunshine Harvester Works as a welder, developing the use of oxygen and acetylene, but working on reduced hours during the Depression.

Prue wrote later: “Despite the Depression, there was joy in our lives …” Her family had a productive vegie garden and orchard, chooks, and two cows (kept in a leased paddock nearby and brought home to milk). Jacob Hyett caught yabbies, fish, rabbits and game, while Agnes Hyett produced freshly baked bread, home-made butter, lemon cordial, rabbit in pies, or stewed, roasted, fried, as well as steamed puddings, jams, pickles, sauces and countless sandwiches. Well-educated Agnes was also a lover of words. She “kept her sanity” by reading and attending a monthly readers’ circle.

Prue and her twin sister Mary attended Our Lady’s Catholic Primary School, Sunshine from 1931, up to grade 8. For three years (1939-42) they went to Catholic Ladies College in Grey Street, East Melbourne. Prue enjoyed her time there but later expressed the pain of growing up Catholic in Sunshine. In an introduction to The Story of Our Lady’s, Sunshine 1927-1987 she recalled “the bigotry that existed in those early days … There was a ghetto mentality and Catholics tended to live apart”. At one point, Prue was active in the National Catholic Girls Movement and on the national executive.

On leaving school, Prue and Mary began working for Forest Products CSIR, in South Melbourne, testing timber for aircraft. They worked day and evening shifts, alternate weeks. It was wartime. They also attended evening classes, including classes at Melbourne Technical College (later RMIT). Prue did engineering drawing and Val McGoldrick, an engineer, was the instructor. In 1949 they married, living initially at Moonee Ponds. They had two sons and moved to Yallourn, where Val had a job with the State Electricity Commission. By 1955, they had a family of four children – James, Bernard, Anne and Damien – and lived in Yallourn for 28 years, becoming involved in the local community.

Prue was active in school, church, the Catholic Women’s Service League and part-time teaching. In her forties, she studied at the Gippsland College of Advanced Education and matriculated. A photo taken in 1967 shows her in uniform as Superintendent of the Yallourn Red Cross. She began working as a journalist with the La Trobe Valley Express and in 1979 Gippsland Printers published her centenary history of Morwell, Steam horse to power – a history of Morwell town.

When the town of Yallourn came to an end, about 1980, the McGoldricks moved to Paynesville. Prue wrote ‘Yallourn was …’, a history of the town, worked for the Bairnsdale Advertiser and began preparing When the Whistle Blew, commissioned by Sunshine City Council. Later, she donated her research material to Sunshine & District Historical Society and lodged manuscripts with the State Library of Victoria. In 1996, she wrote a history of St Patrick’s Church, Paynesville.

Her book Jaberanda: Living in the Twentieth Century appeared in 2001. The title Jaberanda came from the first letters of her four children’s names. Her 13 grandchildren saw her as “technologically savvy”, a “super granny”, and appreciated her competence with digital camera and computer, her adventurous cooking and her humour. Her husband Val died in 2006 of Alzheimer’s. Prue’s last years were spent in Paynesville Gardens Community Care. She died peacefully at Paynesville in early February and is buried at Paynesville Cemetery.

Hard working, a meticulous researcher who carefully cited her sources, Prue had a talent with words. Like her cousin Jack Hyett, noted naturalist, teacher and writer, she loved nature. Honest and forthright, she was not afraid to speak her mind at times. She was humble and generous and gave valuable help to Sunshine & District Historical Society through serving on a review panel, with Associate Professor Don Gibb, for the society’s publications Harvester Town and Harvester City. Although she spent most of her life in Gippsland, Prue never forgot her Sunshine roots. She returned many times, including a visit for the launch of her book My Paddock, by her nephew John Hyett, then mayor of Sunshine. Her books on the area’s past are a lasting legacy.

Historian Olwen Ford is a family friend and former colleague of Prue McGoldrick.