Lopez Obrador announces probe into disappearance of 43 students as he promises an end to culture of impunity. 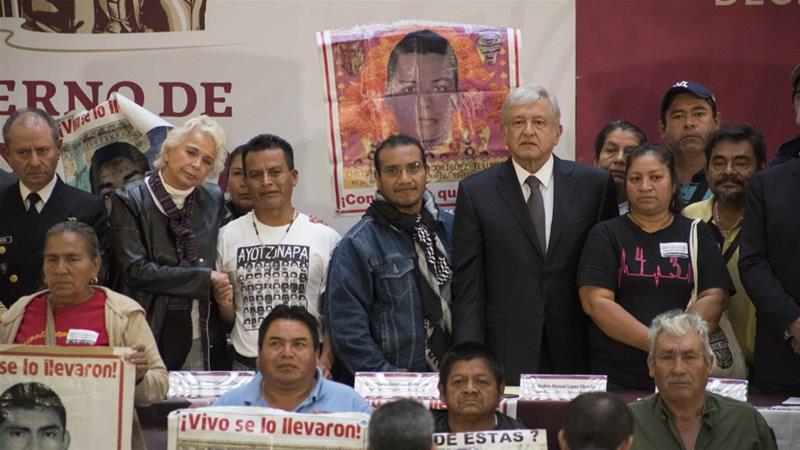 Mexico’s new President Andres Manuel Lopez Obrador has signed his first decree creating a truth commission to investigate the kidnapping of 43 students in an apparent massacre, which remains one of the country’s most notorious unsolved crimes.

Lopez Obrador announced the move during a press conference on Monday, two days after being sworn in as president, fulfilling a campaign promise made in September to re-examine the incident.

The student teachers from a rural teachers’ training college in Ayotzinapa disappeared after police intercepted them in the town of Iguala while on their way to a protest in September 2014.

Three were shot and killed by police in Iguala, while the others escaped in two buses. Both vehicles were later stopped by police, but while one group was let go, the others have not been seen or heard from since.

Posing with the parents of the missing young people, who displayed photos of their loved ones, the 65-year-old president, popularly known by his initials AMLO, promised an end to impunity and a wide-ranging investigation.

TRANSLATION: Today we begin the actions to know the truth and have justice for the young people of Ayotzinapa.

“The whole government is going to help with this plan and I can assure you that there will be no impunity either in this sad and painful case or in any other,” he told reporters.

“I hope that we will soon know the truth. That there’s justice and an example is set so never again human rights are violated in our country, so that no other Mexican suffers the disappearance of their children.”

The new commission will include the parents of the 43 students, their lawyers and representatives from the interior, foreign and finance ministries, along with experts and specialists required for the investigation.

Alejandro Encinas, Mexico’s sub-secretary for human rights, said the commission would be “the first step of many steps we will take in the process of reconciliation in the country”.

The case cast a long shadow over the previous government of Enrique Pena Nieto, which was seen as complacent in its approach to the investigation.

Prosecutors have said the students – who have become collectively known as the “normalistas de Ayotzinapa” – were killed by a drug gang and their bodies incinerated, but conclusive evidence has never been presented and no high-level prosecutions have been made.

Maria Martinez, the mother of one of the missing students said Lopez Obrador’s perseverance – he was elected in this third attempt to gain the presidency – gives hope to those whose children are missing.

“There are families suffering because they have lost someone, it’s difficult to see an empty chair, an empty bed without a child. You need to win our trust, we don’t trust anyone but we have a bit of faith,” she said in an address to Lopez Obrador at the event.

“We don’t want to be made fun of, everywhere we go we are humiliated. You set an example of someone who perseveres, it’s a good example”.

The move has been welcomed by rights groups, with Amnesty International calling it “an action [to] build a Mexico based on justice and truth”.

During his campaign, Lopez Obrador said “everyone” including the army and federal police would be looked into and vowed to invite international investigators who claimed their research was blocked.

While the students’ case continues to be widely publicised, it represents a tiny fraction of the total number of missing people in Mexico, which is embroiled in an ongoing security crisis.

The National Registry of Missing and Disappeared Persons has recorded 36,265 missing individuals as of April 2018.

Once seen as a tool of military dictatorships, disappearances now happen in every region in the world and in a wide range of contexts, according to Amnesty.

TRANSLATION: In his first hour as president, Lopez Obrador announces the creation of a truth commission to investigate the forced disappearance of the Ayotzinapa normalistas. We welcomed this action to build a Mexico based on justice and truth.