THE grief-stricken mom of a 26-year-old woman among the 156 still unaccounted for after an apartment block collapsed in Miami has blasted Gov Ron DeSantis for "not doing enough".

At least five people have been confirmed dead after the Champlain Towers South crumbled on Thursday night, with dozens of others still missing as families grow desperate for their loved ones to be found. 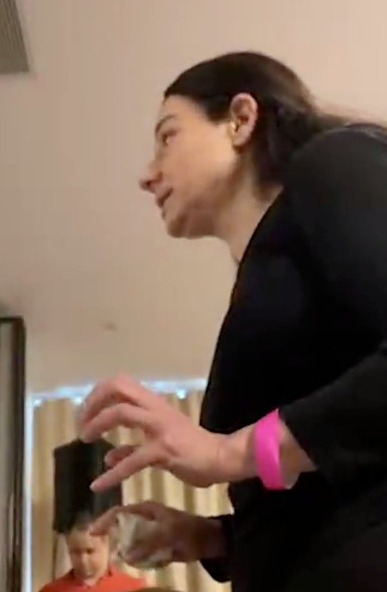 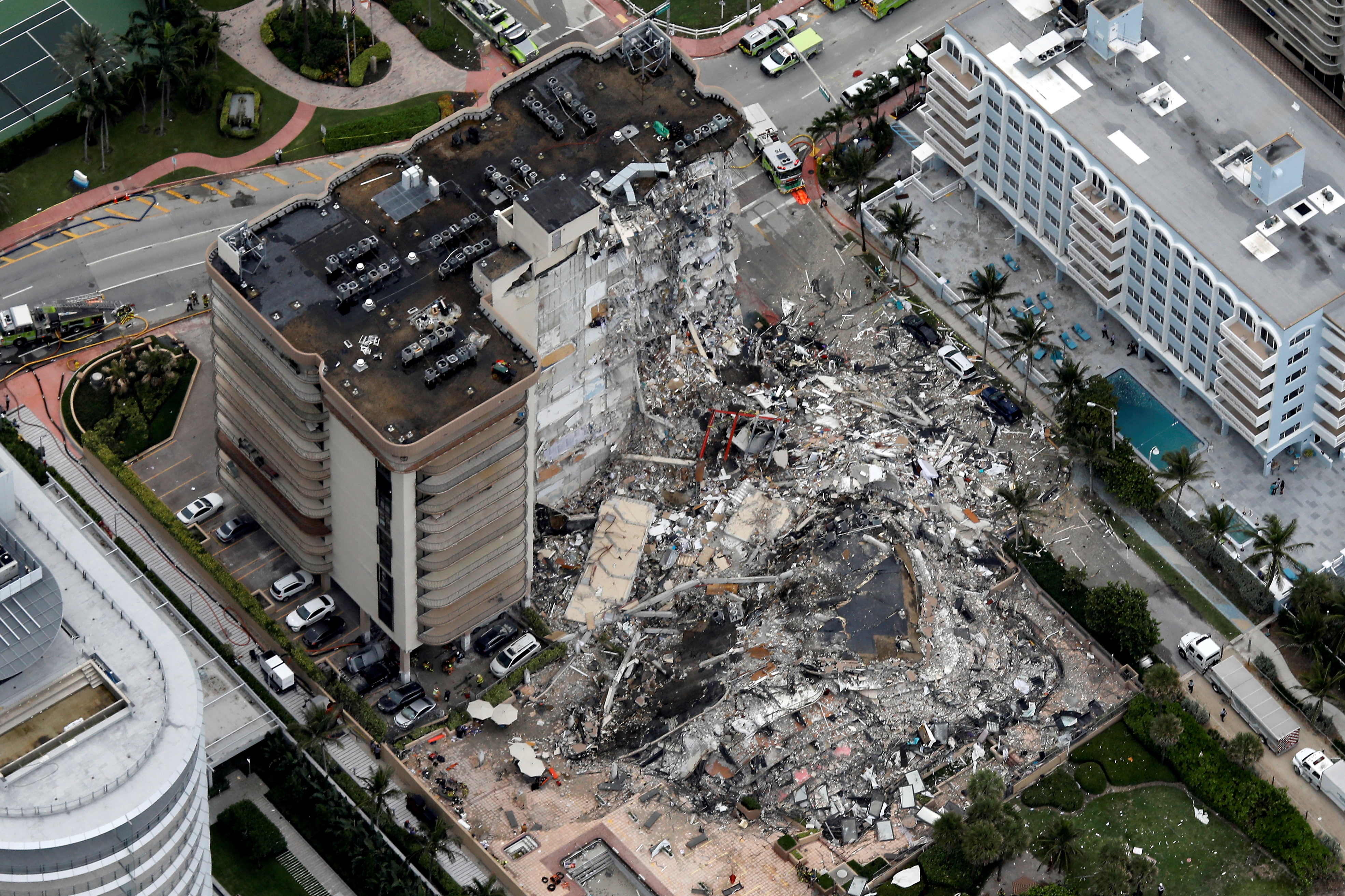 An emotional mom has slammed officials for not doing more to rescue those who remain trapped in the rubble.

"It impossible that in four days nobody has emerged dead or alive," she said.

"It's not enough. Imagine if your children were in there.

"My daughter is 26-years-old, in perfect health, she could make it out of there. Four days have gone by.

"Red tape is not important when my daughter is dying"

The heartbroken mom begged Florida rep Ron DeSantis to do more after accusing officials of going back on their word to let Israeli crews help search for survivors.

“I was promised yesterday that the Israeli team was being let in," she raged

"What is the reason? Why aren't they there and when will they be there? 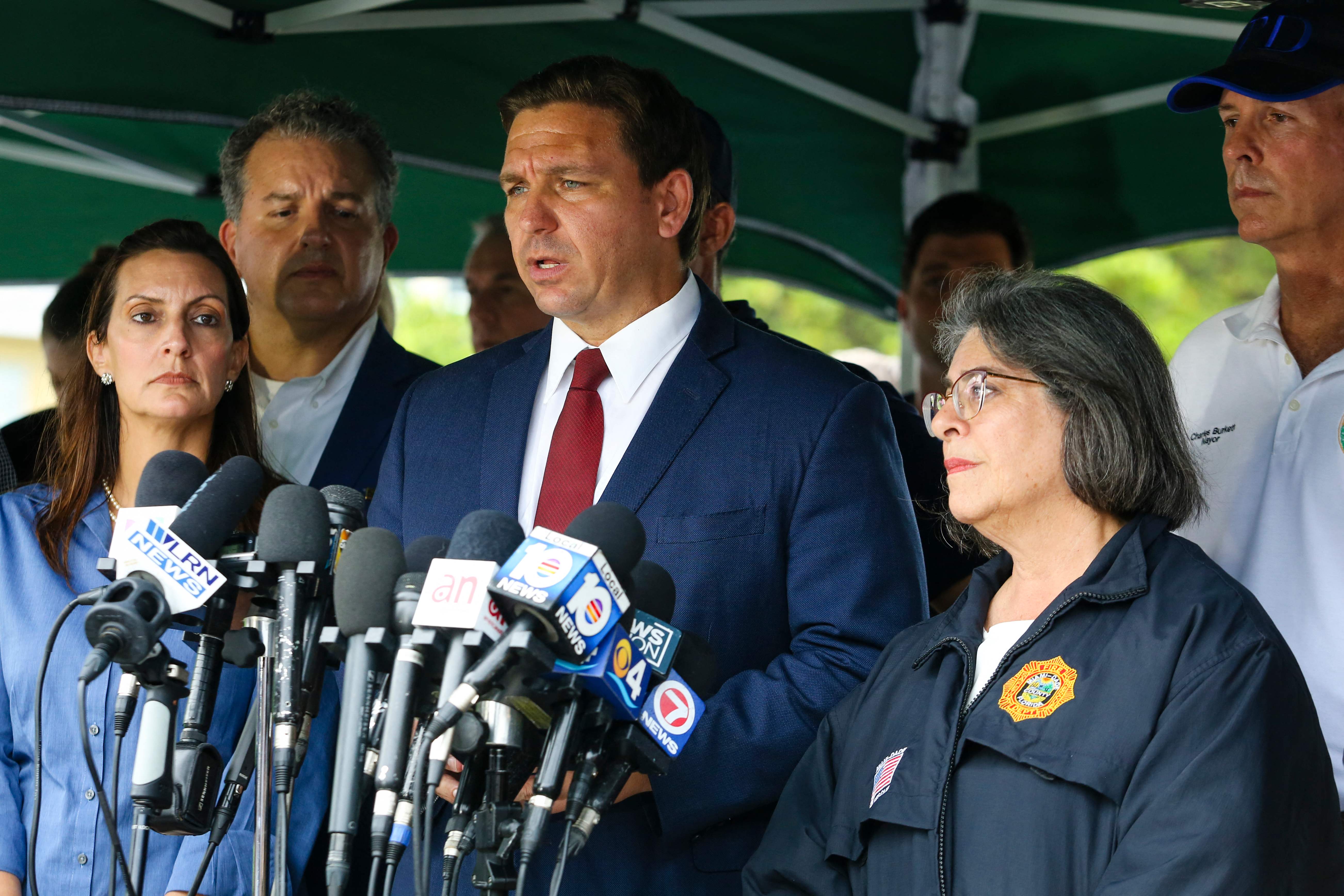 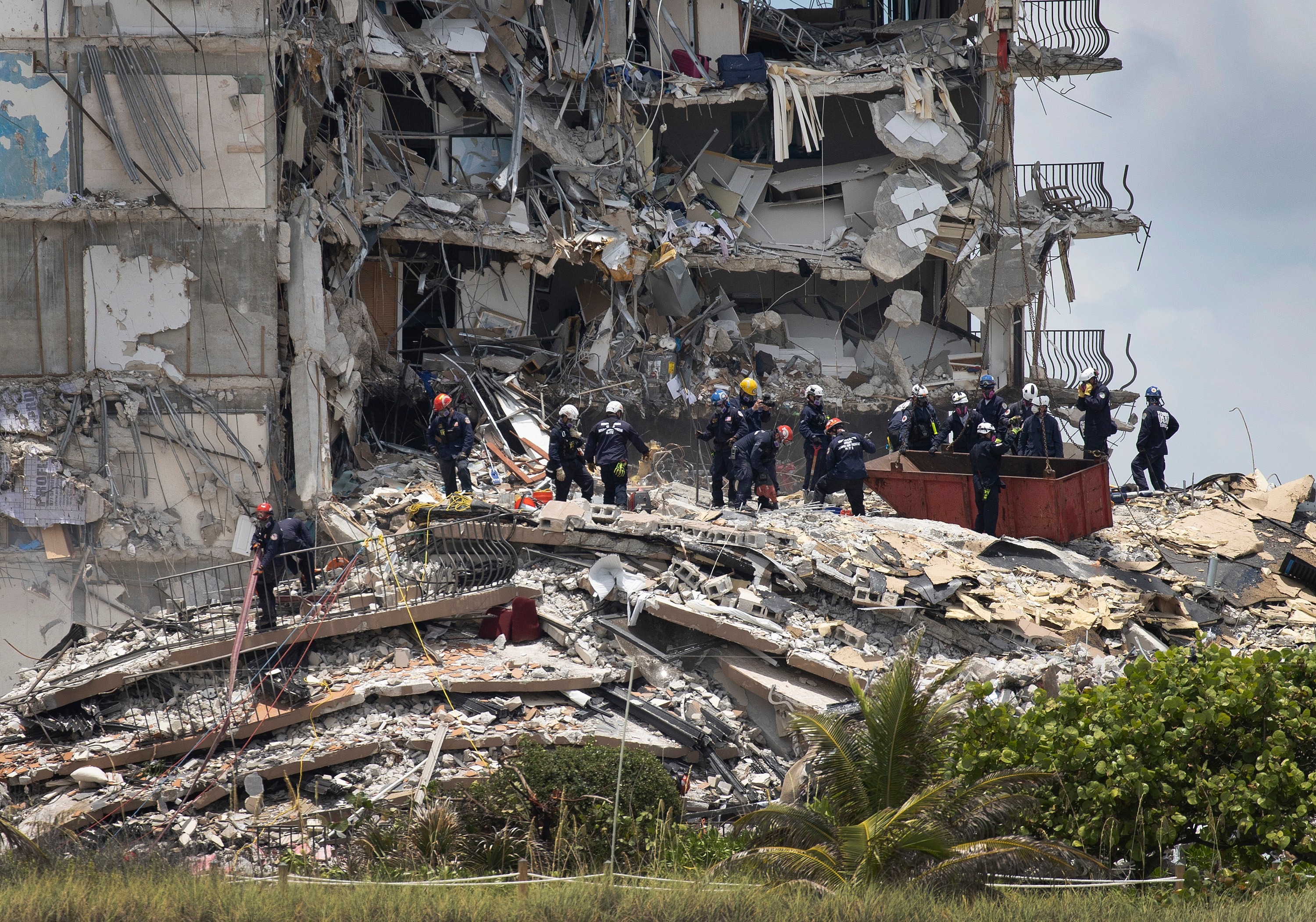 "Much too much time has gone by and promises aren't being kept.

"You promised us, Governor, it’s in your control.

"I want an answer, not a Band-Aid, not a Tylenol, not someone to assuage my pain."

But DeSantis insisted international crews were not being stopped from aiding rescue efforts.

“The state is not preventing that at all," he said.

"If the Israeli team, if they can use that, they have 100 per cent support from the state to do that."

Miami-Dade Assistant Fire Chief Raide Jadallah said local crews were "just as qualified" to deal with the devastation as teams from other countries, adding that the mom's claims would be "looked into". 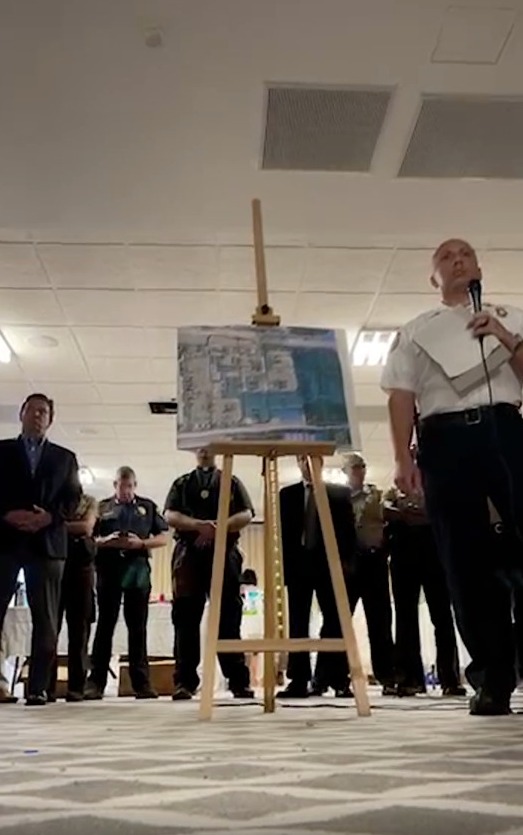 Dissatisfied, she clapped back: "You told me that last time. Stop looking – do."

As of Saturday, five people have been confirmed dead, and the number of people still not found stands at 156.

Officials said 130 people were accounted for.

Teams of determined rescuers are continueing to sift through the shattered concrete mountain tapping for victims to hopefully call out and confirm they are alive.

They are "concentrating resources" on areas where they hear sounds, officials said.

Dr Howard Lieberman, a Miami-Dade Fire Rescue trauma surgeon, explained that the trapped survivors may have become less vocal in their pleas.

"As time’s running out they might be getting a little more sick or ill – not as vocal as before – but, like I said, we’re going to keep searching,” he told CNN. 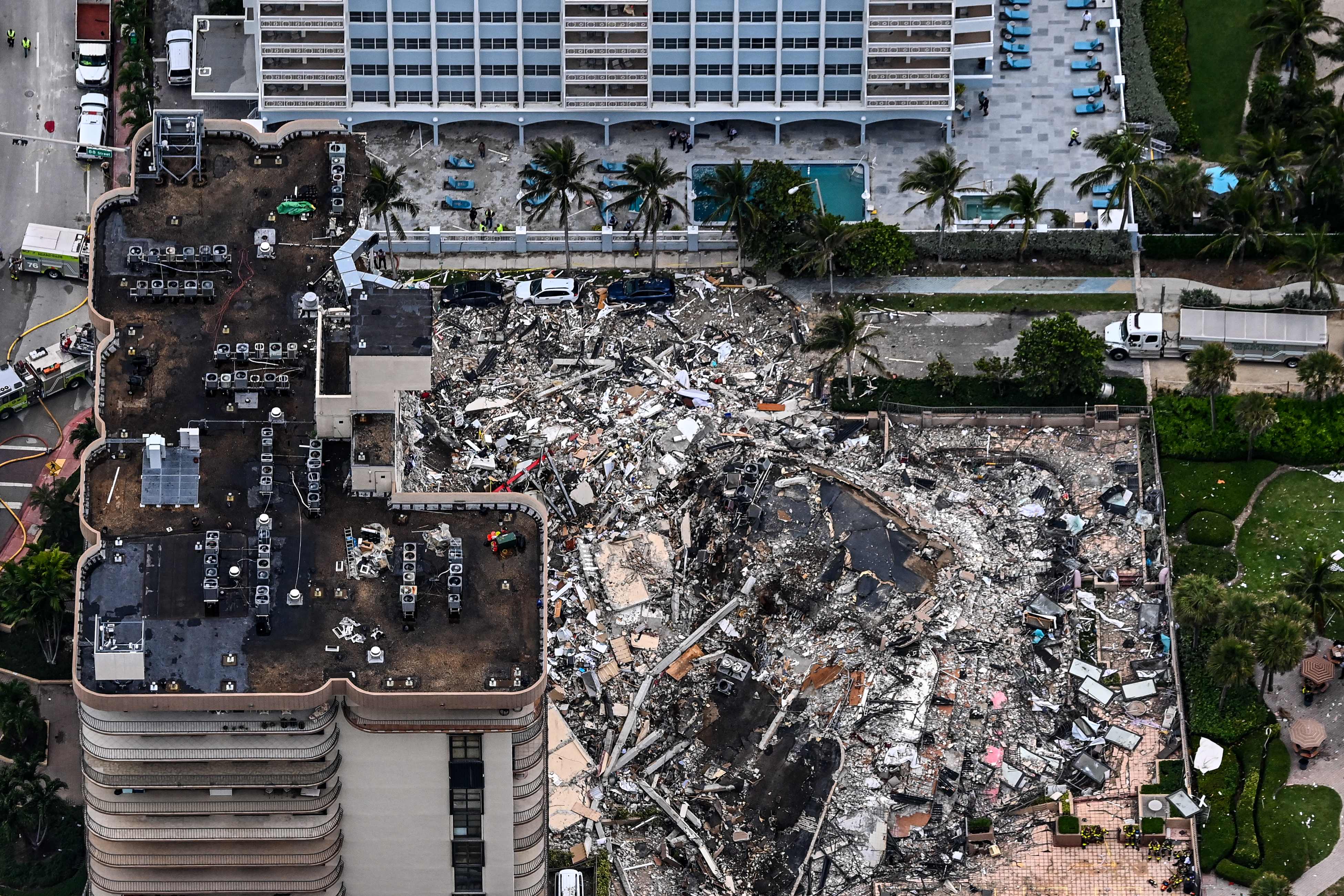 The first victim of the collapse was named Stacie Fang – a mom who helped prop her 15-year-old son from the rubble to safety above.

The 54-year-old, who was lifted from the debris herself, died after she was treated at Aventura Hospital and Medical Center.

Her son, Jonah Handler, was rescued by firefighters right after the condo building came down.

Another name was released on Saturday was Manuel LaFont, who lived in Apartment No. 801, according to the Miami-Dade Police Department.

The 54-year-old was originally from Houston, according to Click2Houston.

Two missing people who were found in the rubble were identified as Antonio and Gladys Lozano, both in their 80s.

A 2018 engineering report from Morabito Consultants claimed: “The failed waterproofing is causing major structural damage to the concrete structural slab below these areas."

“Failure to replace the waterproofing in the near future will cause the extent of the concrete deterioration to expand exponentially," the report stated.

The firm’s report was released by the city of Surfside and reported by The Associated Press while crews on Saturday were in a race against time attempting to pull any survivors from the monstrous rubble.