IT’S the unfinished Michelangelo masterpiece that experts reckon may be worth up to £100million.

But the Royal Academy may have to sell its prized marble sculpture as 150 gallery staff face redundancy, it is claimed.

The 515-year-old sculpture, known as the Taddei Tondo, was given to the London gallery in 1829 to inspire the academy’s schools after the death of owner Lady Margaret Beaumont.

Like many arts institutions, the Royal Academy has seen its finances badly hit by the pandemic and has been forced to consider lay-offs. 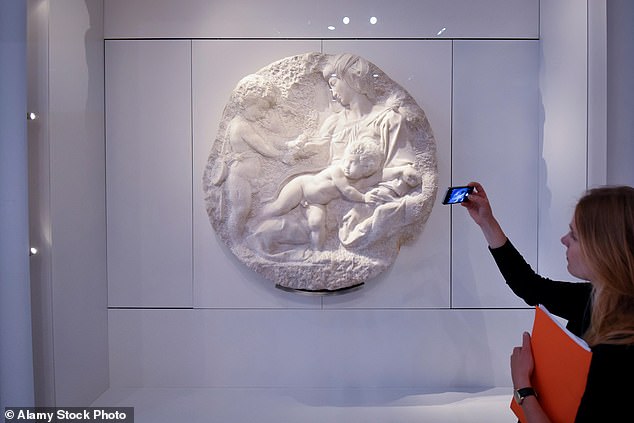 Masterpiece: A gallery staff member with the Michelangelo Taddei Tondo

As a result, a group of Royal Academicians could argue that instead of cutting jobs, the institution should consider selling the Tondo – the only marble sculpture by Michelangelo in the UK.

One anonymous Academician told The Observer: ‘The sale of the Tondo has already been discussed.

It is worth so much, it could save jobs and get the RA out of the financial mess they have got themselves into.’

The sculpture’s value remains a closely guarded secret but in 2017 The Art Newspaper claimed that it would fetch at least £100million if sold.

It has been reported that those at the Royal Academy who support the controversial rescue suggestion have called for a special meeting.

But, it is said, they have been met with resistance from president Rebecca Salter, and from the executive, apparently ‘horrified’ by the idea of selling something so iconic.

It is hoped by some Academicians that the suggested sale will be discussed at a virtual annual general meeting of members due this week.

But a spokesman for the RA told The Observer it ‘has no intention of selling any works in its collection’.

The Taddei Tondo, featuring the infant St John the Baptist, and the infant Christ with the Virgin Mary, was carved  between 1504 and 1505.