Bottleneck of 700,000 migrants wait in Libya to cross the Mediterranean to Europe after Italy turned boats away

Hundreds of thousands of migrants are waiting in Libya to cross the Mediterranean to Europe, according to Britain’s National Crime Agency.

It warned that Italy’s refusal to take stranded ships had created a bottleneck of 700,000 waiting in the North African country.

There has been a spike in attempted illegal sea crossings to Europe this year. Some 300 people drowned last week alone. 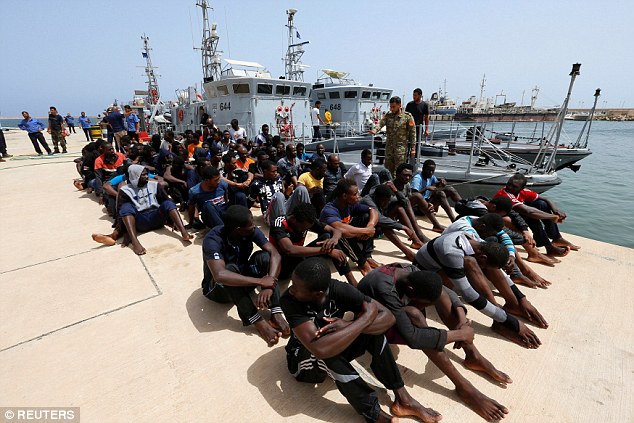 Migrants sit at a naval base after being rescued by Libyan coast guards in Tripoli, Libya

In a briefing, Tom Dowdall, NCA deputy director of organised immigration crime, warned of a ‘meltdown’ in Libya because of Italy’s policy.

He said migrants were finding new ways to evade detection, including hiding in ‘coffin-sized’ spaces in vehicles, with ‘complicit lorry drivers’ charging up to £2,000 per migrant.

He revealed that smugglers collectively make up to £6billion a year charging would-be migrants.

He said: ‘Organised crime gangs are loading people into lorries, before bringing them through France and onto the UK. There are adapted hides in the rear of vehicles, an area for six to eight people, with welded false doors, and coffin “hides”.’ 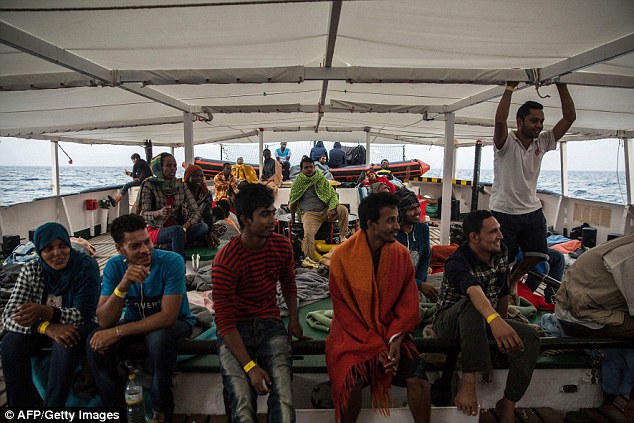 Migrants wait on the deck of the NGO Proactiva Open Arms boat , the NGO rescued 59 migrants as they tried to cross the Mediterranean from the North African country 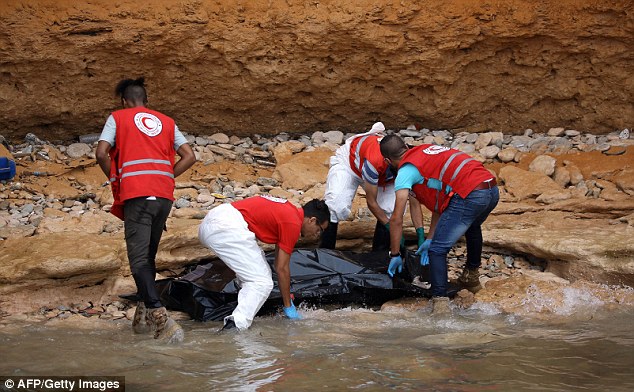 Members of the Libyan Red Crescent recover the body of a drowned migrant off the coast of Tajoura, east of the capital Tripoli

Mr Dowdall said ‘complicit lorry drivers’ were charging up to £2,000 per migrant.

Iraqi Kurds, Afghan and Albanian gangs were the most prolific people smugglers to the UK.

Since the destruction of the Jungle camp in Calais in 2016, the issue had shifted to Belgium, he said.

The details emerged at a briefing on Project Invigor, a joint NCA, Home Office, Coastguard, Border Force and Crown Prosecution Service operation, according to the Sunday Express.

The project costs £14million a year to run.

They are boats manned by non-governmental organisations

He said the NGOs were supposed to rescue people once they are more than 12 miles from the Libyan coast, but they were coming in much closer.

He said: ‘They make it easier for the crime groups who now send a boat with not enough fuel on purpose as they know they will be picked up.’

The revelations of the scale of the challenge come after EU officials in Brussels had struggled to agree on a joint response to migration to calm tensions in Italyand Germany. 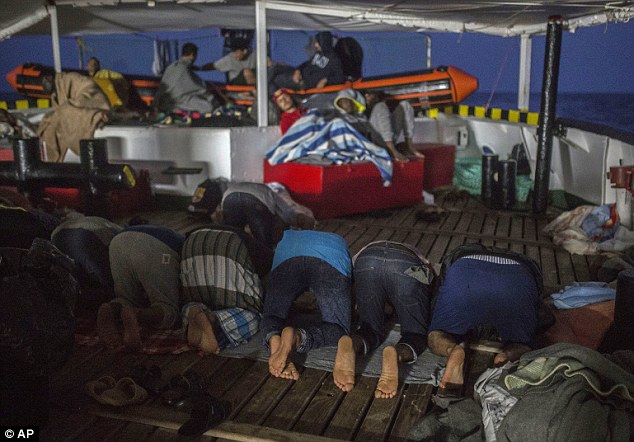 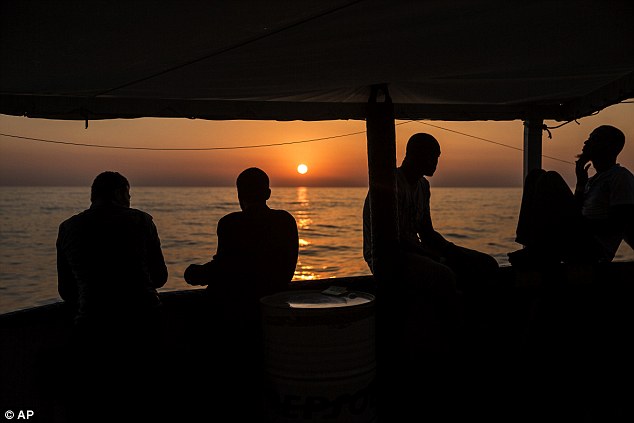 The aid boat sailed to Spain with 60 migrants rescued on Saturday in waters near Libya, after it was rejected by both Italy and Malta

Germany, Italy and Austria will this week hold talks on how to ‘shut’ the migration route across the Mediterranean from Africa into Europe.

The government quietly dropped plans to turn away migrants who are already registered in another EU country unless Germany has a bilateral deal to deport them.

The latest figures show attempted crossings to Greece and Turkey are up by 47 per cent on last year. Those to Spain and Italy up by 75 per cent.

They have not reached the peak levels of 2015, when Mrs Merkel opened Germany’s borders and allowed a million refugees in.