The preparations for the Royal wedding have got off to a flying start with the RAF and Army Air Crops practising their duties for the big day.

Military personnel were seen flying helicopters, practising marches and sword drills at the Army Air Corp’s Wattisham Airfield and RAF Honington today ahead of Prince Harry and Meghan Markle’s wedding on May 19.

Harry, 33, served with the 3 Regiment Air Corps while he was in Afghanistan and some of the soldiers who fought alongside him will be ‘pride of place’ outside St George’s Chapel in Windsor as the newlyweds emerge next Saturday. 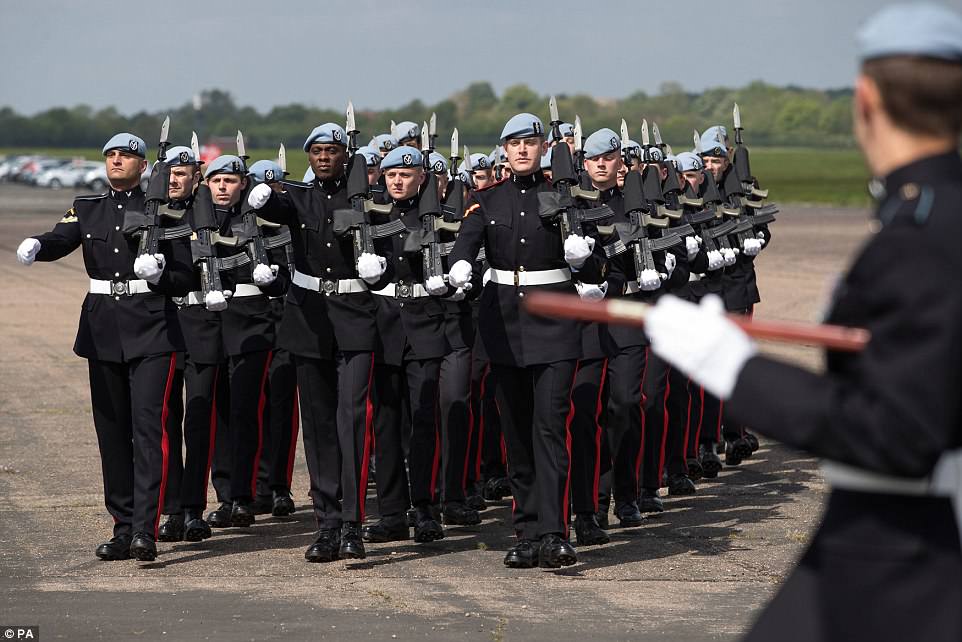 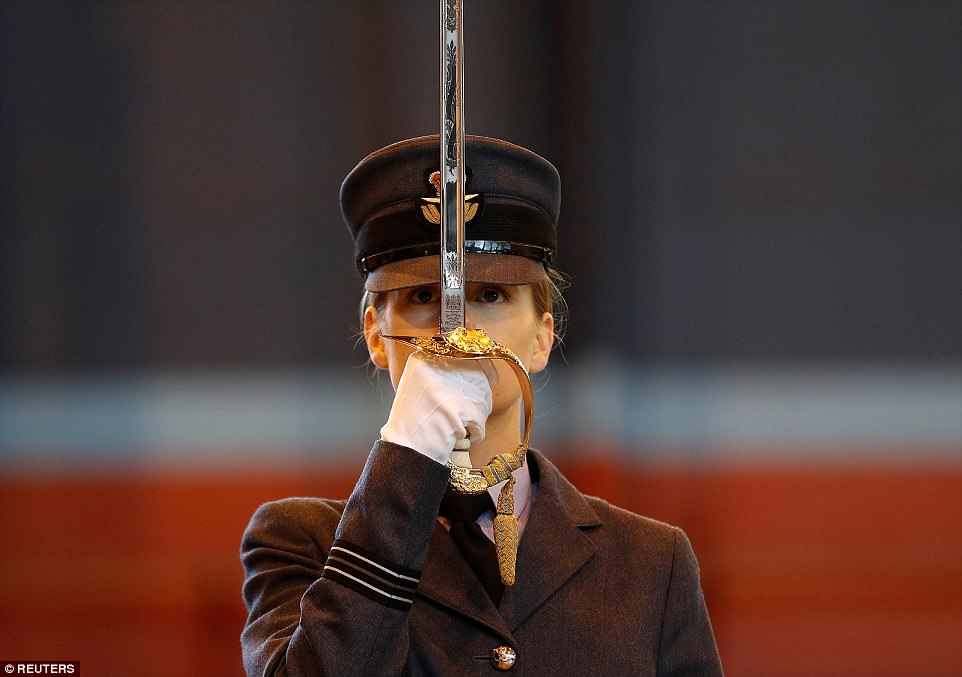 He flew inside the same Apache helicopters spotted at the Suffolk airfield today when he served in Helmand in late 2012.

Over 250 members of the Armed Forces will be on various ceremonial duties on the day, with certain regiments with a special relationship to Prince Harry providing support on Kensington Palace’s request.

Twenty-three soldiers, one sergeant and one officer from Harry’s former Army Air Corps regiment will line the street outside the chapel where the royal couple will say their vows.

During his Army days, Harry was known as Captain Wales, part of the 662 Squadron, 3 Regiment Army Air Corps, where he worked as an Apache helicopter pilot. 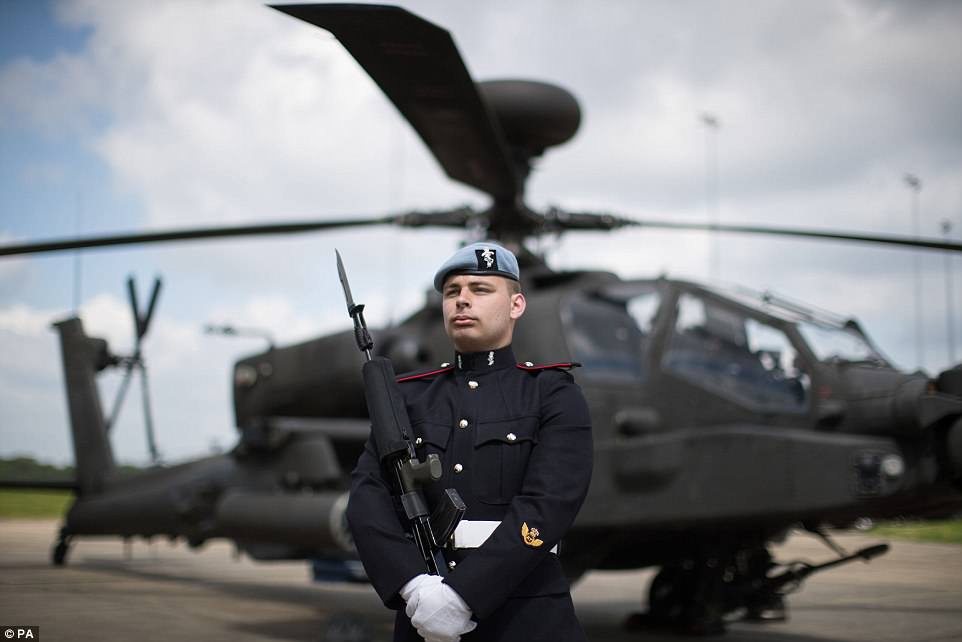 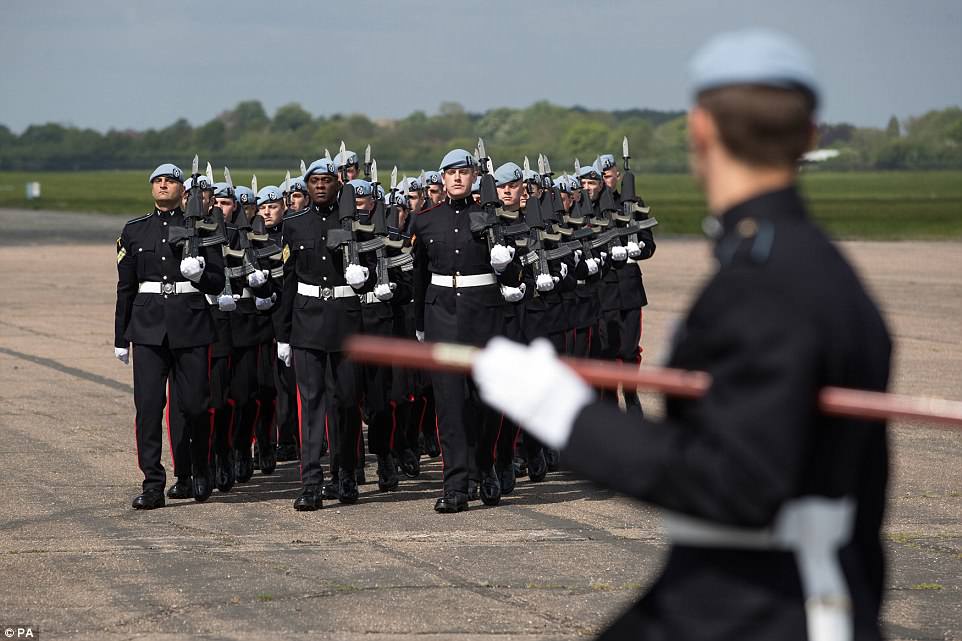 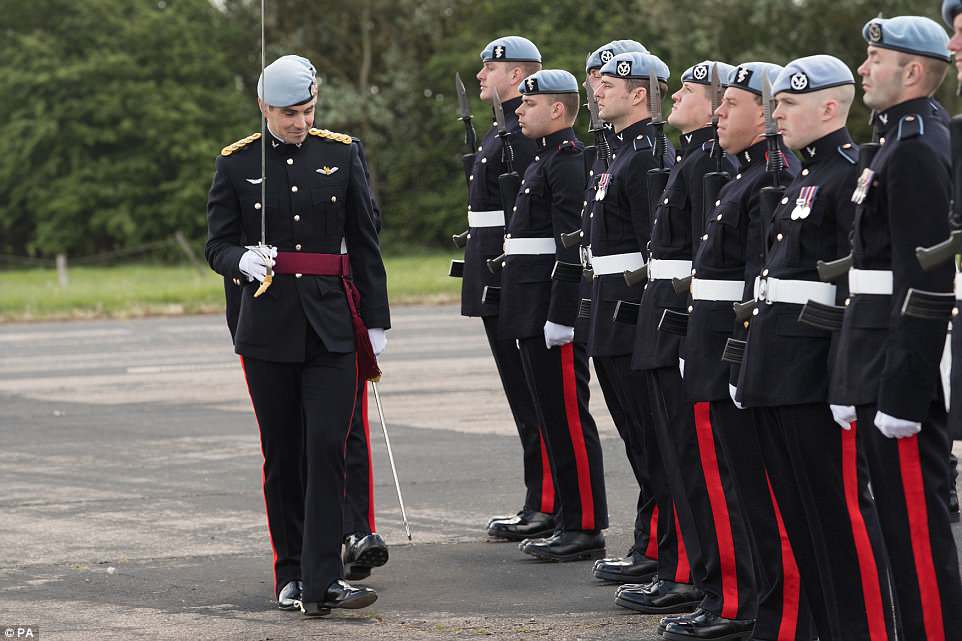 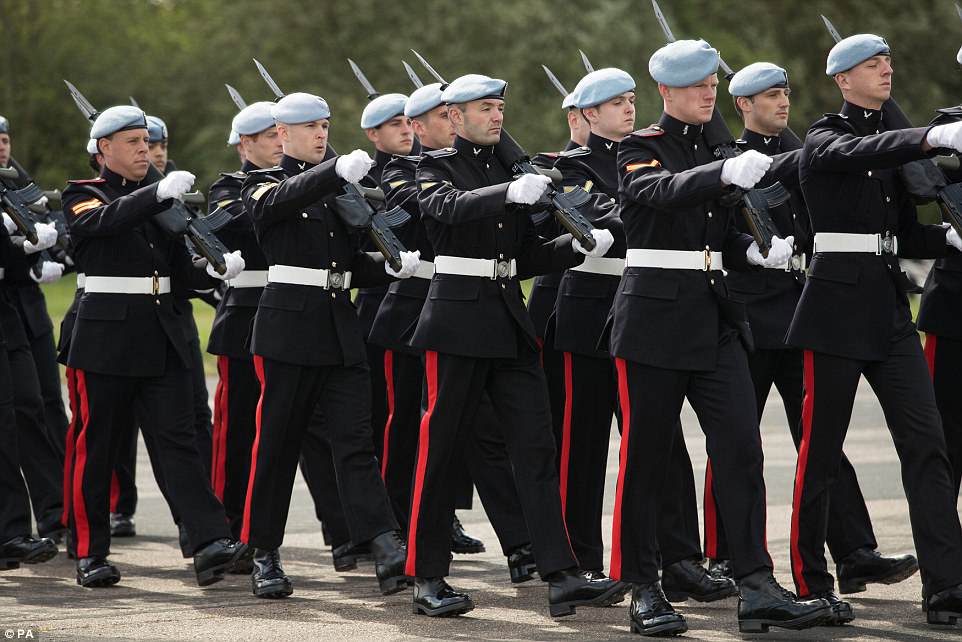 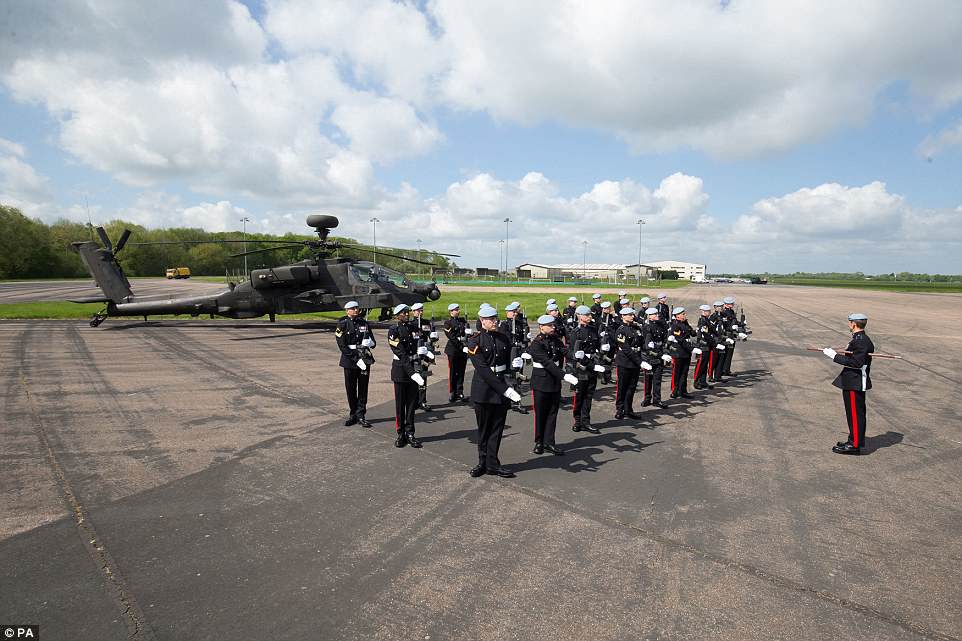 Twenty-three soldiers, one sergeant and one officer from Harry’s former Army Air Corps regiment (pictured at Wattisham Airfield in Suffolk today) will line the street outside the chapel where the royal couple will say their vows 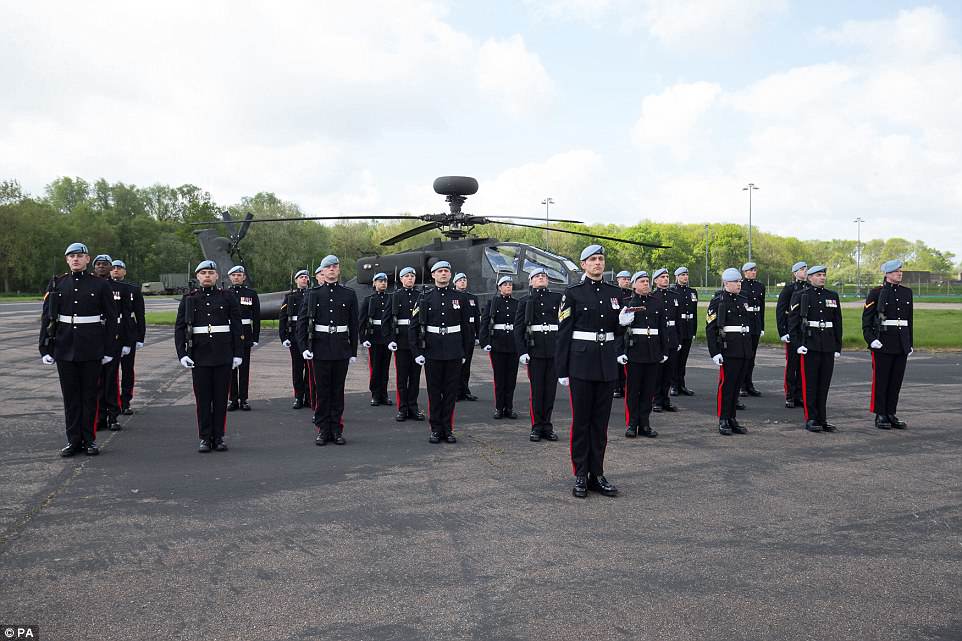 Captain William Calder, who will be half company commander on the day and lead his soldiers in a royal salute, said he had some nerves ahead of the wedding.

He said: ‘We will march through Windsor into the castle in time for the end of the wedding and as the couple and the royal family depart, we will be pride of place presenting them with a royal salute as they emerge from the chapel.

‘It makes me a little bit nervous that we will be front and centre – the Queen and the senior members of the royal family will be stepping out the door right beside us and I’ll probably be positioned about five metres from them.’

Captain Calder, 32, says his unit has been training hard ahead of May 19 and was ‘stunned’ when he found out he would be getting such a key role. 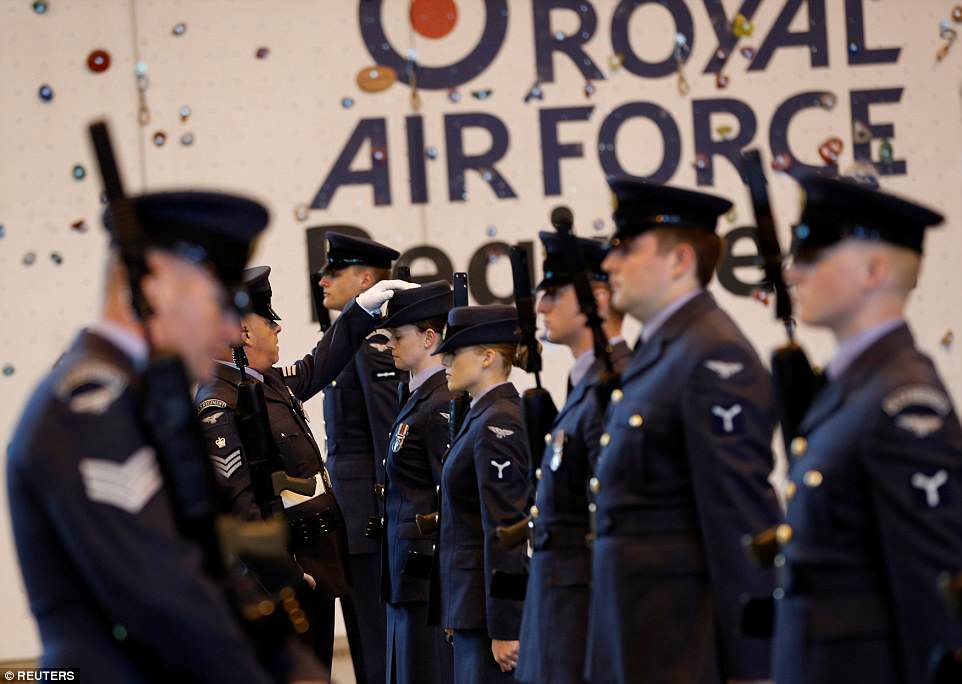 Members of the RAF will also be taking part in ceremonial duties for the Royal wedding, they are pictured at RAF Honington 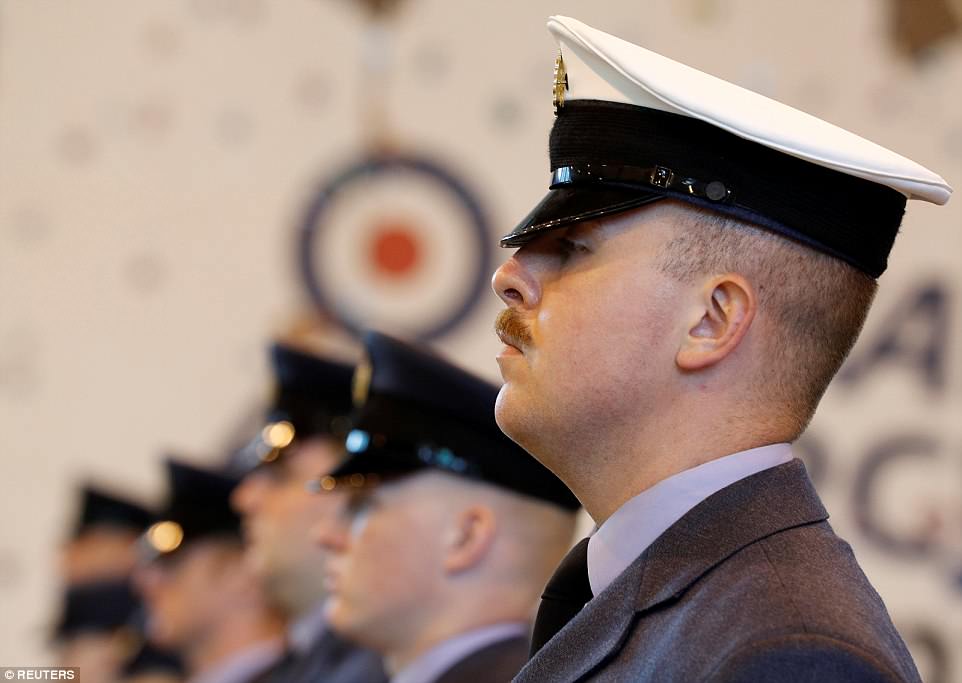 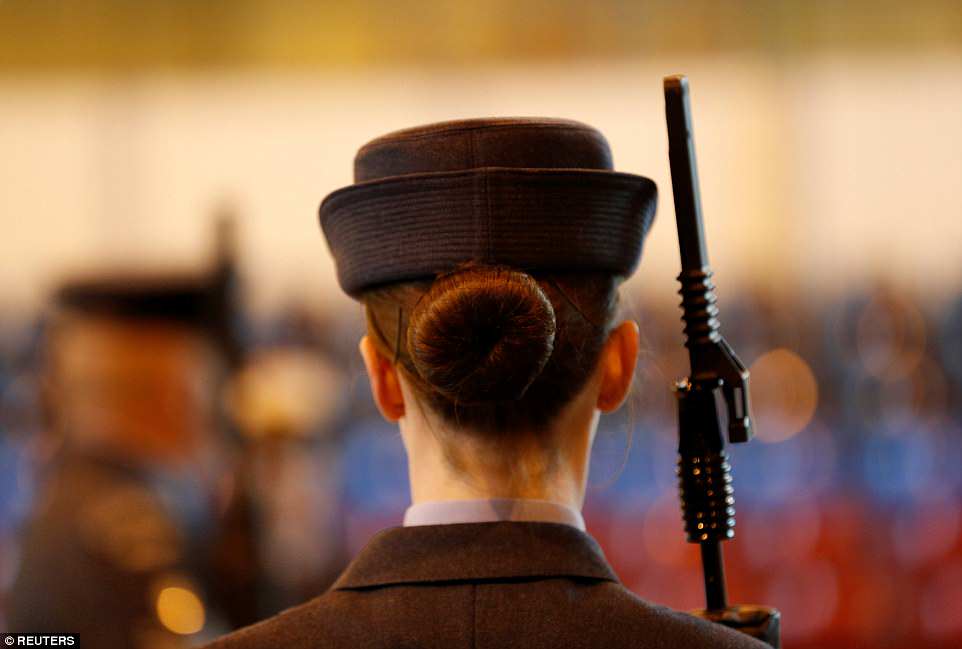 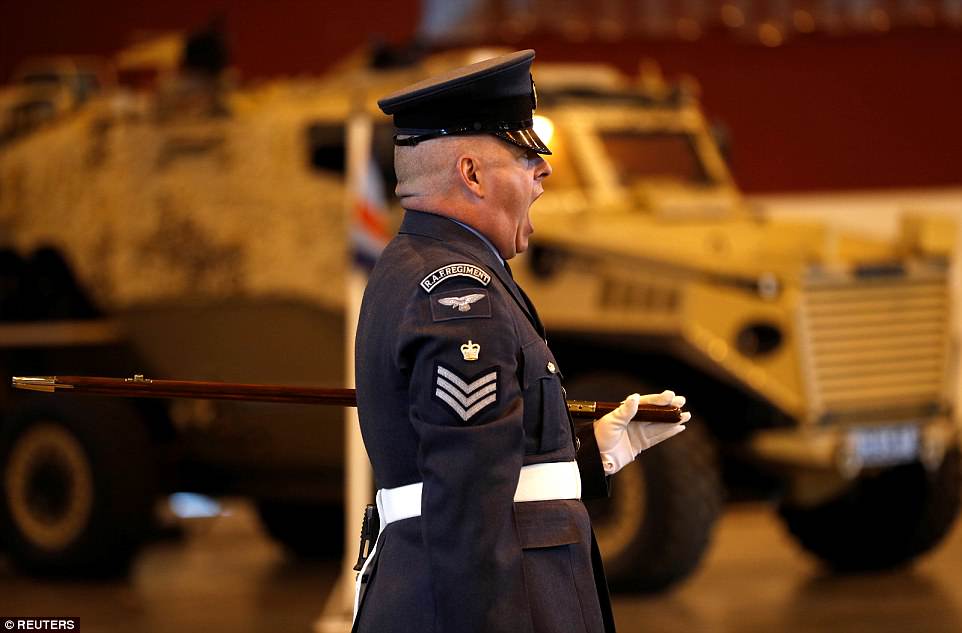 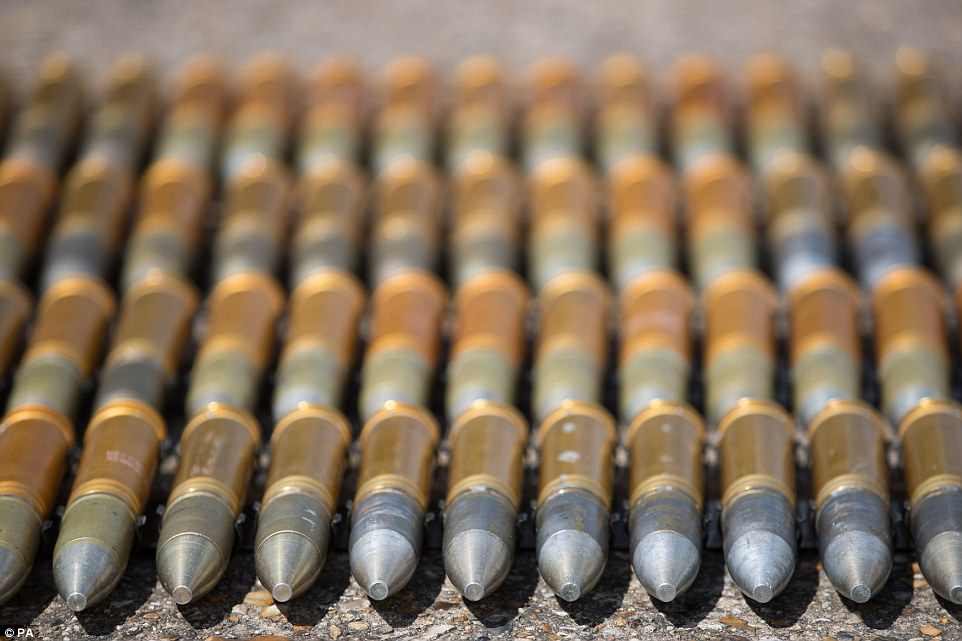 He said: ‘For us stepping into ceremonial duties is something a little bit outside of our remit but it’s a nice, special treat and something different.’

Capt Calder said his only meeting with the prince was a chance encounter at the cafe at Army Aviation Centre at Middle Wallop, in Hampshire, where the royal asked him ‘Can I join you?’

‘I knew he looked familiar, finally it dawned on me it was Prince Harry and of course he was utterly natural and charming and friendly and just like any other officer in the regiment,’ he said.

Another soldier who served with the prince during his time at Wattisham, Staff Sergeant North, said he too harbours a few nerves but he was confident the half company would be ready.

‘It’s a privilege,’ he said. ‘Obviously there will be a few thousand people in attendance and millions of people worldwide watching the event but to be one of the roughly 250 military personnel taking part, to be able to see it will be amazing.

‘There’s always going a little bit of nerves and trepidation with anything you do to that level but by the time we get there, the training we conduct this week and next, we’ll be looking smart and good to go.’

The 35-year-old, whose first wedding anniversary is the following day, will have to miss part of his daughter’s fourth birthday to perform his duty.

He said she was ‘delighted’ her father was involved and she would probably watch a recording of the event later.

‘I get to miss the soft play but I will be home in time for bedtime, which is the most important part and in time for the presents,’ he said.