Top golf stars have torn into Jeremy Corbyn’s tax plans after he blasted the super-rich.

English fairway stars Ian Poulter and Lee Westwood both criticised the Labour leader after he teed up an attack on Britain’s wealthy elite.

The millionaires lashed out online after Mr Corbyn said that ‘in a fair society there would be no billionaires and no one would live in poverty’.

In a tweet he said: ‘No one is allowed to be successful. You can’t for one minute be serious. Deluded.’ 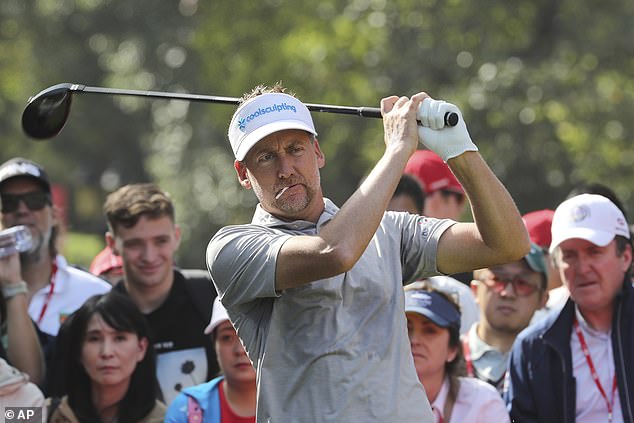 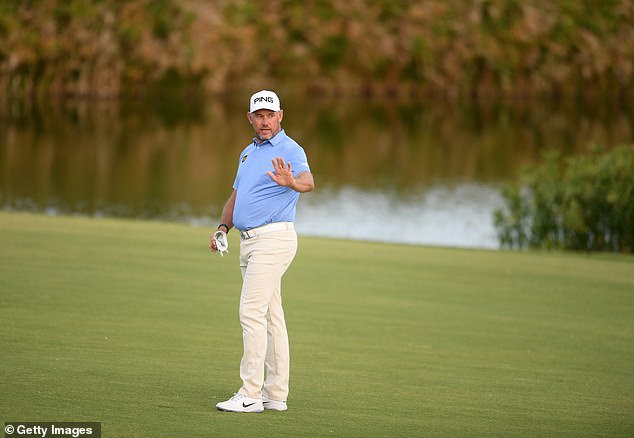 ‘The debate is over’: Jeremy Corbyn tells his shadow cabinet to obey him on Brexit as he fires-up his election campaign

Jeremy Corbyn has told his shadow cabinet ‘the debate is over’ on Brexit, as he seeks to fire up his election campaign by focusing on climate change and social justice.

The Labour leader told a meeting of his front bench colleagues it was time to back him on Brexit after a number of changes to the party’s stance on leaving the EU in the last 12 months.

At the party’s Brighton conference it was decided they would renegotiate Boris Johnson’s deal with Brussels and then put it to the people in a referendum.

Speaking to The Guardian, in the south-west London seat of Putney, Mr Corbyn said: ”I just said, ‘look, this debate is now over. We’ve done it, the party has now made its decision, and that’s it; and that’s what we’re going to campaign on’.’

‘If you’ve bothered to read the responses I’d consider rethinking your policies.

‘Wonder how much tax you pay and how much you give to charity?’

Last week Mr Corbyn unveiled a highly personalised anti-elite message, attacking attacked the Duke of Westminster, 28 – a godfather to Prince George – for being a ‘dodgy landlord’.

He singled out billionaire chemicals executive Sir James Ratcliffe as a ‘big polluter’ and hedge fund boss Crispin Odey as a ‘greedy banker’.

And he accused Mike Ashley, the Sports Direct chief executive, of exploiting his workforce.

It also saw a Corbyn ally call for billionaires to be driven out of Britain. Lloyd Russell-Moyle took the extraordinary stance as he said the UK economy should not ‘work’ for the rich.

‘I don’t think that anyone in this country should be a billionaire,’ he told BBC Radio 5 Live.

Speaking on Radio 5’s Emma Barnett show, Mr Russell-Moyle said: ‘I don’t think that anyone in this country should be a billionaire. I think we should have a system where everyone is able to live well and wealthy.’

Pressed on how that system would work, he said: ‘I think you do it by enabling everyone to be very wealthy to be able to profit from the gains of their work and their labour and make sure the profits are reinvested into communities, not just sucked up by one or two people…

‘There are some people who play by the rules and play very well, but there is a good proportion of people who don’t and we know who they are.’

When Barnett questioned why people should be prevented from aspiring to be billionaires he said: ‘I don’t want this country to work for billionaires. I want it to work for ordinary and normal people.’

Health service bosses have told Boris Johnson and Jeremy Corbyn not to weaponise the NHS during the general election campaign and warned them against making ‘undeliverable promises’.

Carrie MacEwen, chairwoman of the Academy of Medical Royal Colleges which represents the UK’s 220,000 doctors, said politicians were guilty of using the NHS as ‘vote bait’.

Urging the two main parties not to engage in a health service bidding war in the run up to December 12, Ms MacEwen said the NHS must ‘not to be used as a tool to swing voters’.

She also claimed doctors are afraid that the two main parties will tell ‘outright lies’ about the NHS during the election campaign.

The pointed intervention comes after both the Tories and the Labour Party have already made clear that the NHS will be a key focus for both of their respective bids for votes.

Mr Johnson has visited numerous hospitals since he became Prime Minister with health one of a handful of domestic priorities – along with the police and schools – which will form the backbone of the Conservatives’ campaign.

Meanwhile, Mr Corbyn and the Labour Party have made claims the Tories will sell off the NHS to the US in a post-Brexit trade deal – repeatedly denied by the Conservatives – a central plank of their push for power. 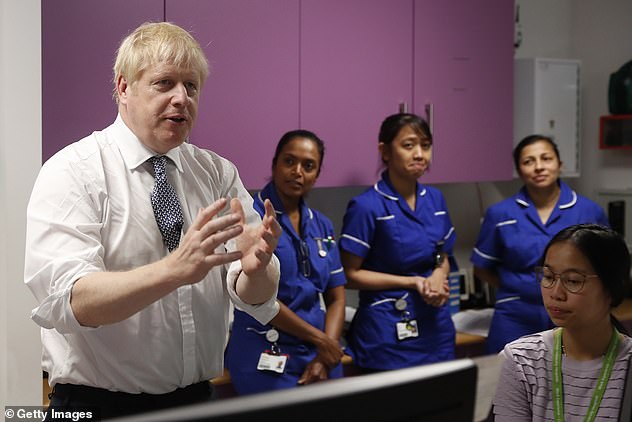 Boris Johnson, pictured during a visit to the National Institute for Health Research at the Cambridge Clinical Research Facility in Addenbrooke’s Hospital on October 31, is expected to focus heavily on the NHS during the election campaign 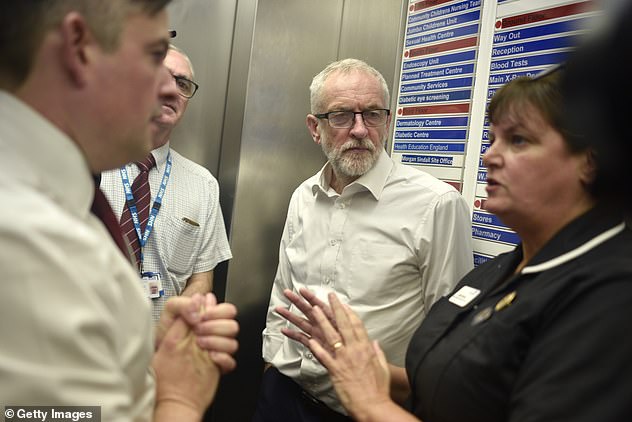 Jeremy Corbyn, pictured on October 30 during a visit to Crawley Hospital, has repeatedly accused the Tories of plotting to sell off the NHS to the US in a post-Brexit trade deal

Writing in The Times, Ms MacEwen said: ‘Loud calls for more resources or “to save our great NHS” are, as every politician knows, guaranteed vote bait.

‘Catnip to the undecideds and a surefire way of getting a round of applause on Question Time. This cannot be right.

‘The NHS’s role is to manage the health of the nation, not to be used as a tool to swing voters in a three-way marginal.’

She added: ‘Our fear is that when it comes to the NHS in these febrile times we will see irrational, undeliverable promises or even outright lies.’

She attacked Labour’s plans for a nationalised drugs company as she questioned who would pay for the research to create the promised new, cheaper medicines.

She also criticised the Tories for announcing funding for 40 new and improved hospitals when cash is actually only in place for six.

‘This is easy electioneering aimed at a soft target,’ she said.

‘They are right to put us under the microscope. But by the same token I am passionate about the NHS and I’m afraid I am angry.’ 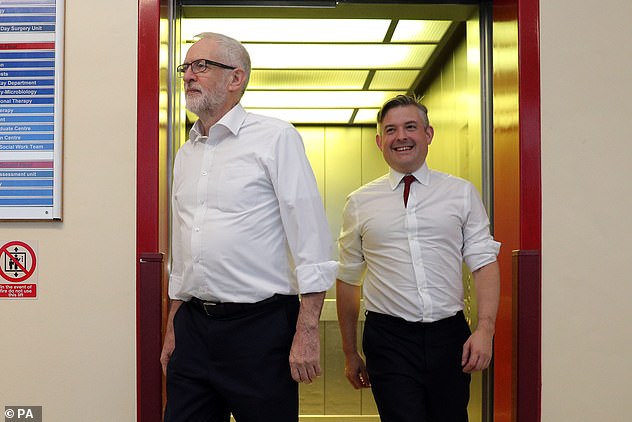 Jon Ashworth, pictured with Mr Corbyn at Crawley Hospital, said doctors were ‘right to hold us politicians to account’

Cabinet minister Therese Coffey, the Work and Pensions, said the NHS is the ‘people’s priority’ and the Tories would ensure it is ‘well invested in’.

‘The promises are genuine, we have already increased the budget for the NHS, that is why we have already made these commitments, six hospitals ready to go to get on with that construction, 34 other hospitals getting in place their business plans for the future,’ she said.

‘It is important that we make sure that we are investing in the NHS for the benefit of patients.’

She added: ‘It is not about trying to use this as a political football, it is very much the people’s priority, and certainly the priority of the Conservatives, to make sure that our NHS which is very much cherished is well invested in and is delivering for patients.’