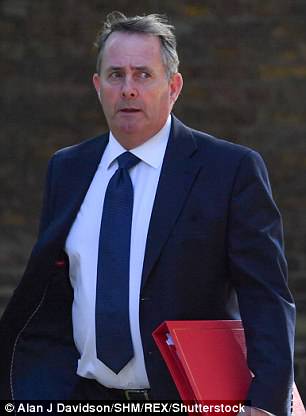 The US President’s decision to hit the European Union with tariffs on steel and aluminium sparked fury as Brussels warned it would not back down under ‘threat’ from the US President.

International Trade Secretary Liam Fox, who spoke to the US commerce secretary yesterday, said the UK would not rule out counter-measures over the ‘patently absurd’ tariffs.

Meanwhile, European Commission chief Jean-Claude Juncker called for the EU to respond by boosting ties with Russia – a move likely to cause discomfort in Downing Street.

Theresa May had led calls for Mr Trump to exclude the bloc from any measures in order to protect the resurgent British steel industry.

The President’s decision to pursue his ‘America First’ programme will raise concerns about deteriorating transatlantic relations.

Under the measures, British and EU companies will be levied with duties of 25 per cent on steel imports to the US from today, as well as 10 per cent on aluminium.

Last night Dr Fox told Sky News the tariffs were ‘very disappointing’, adding: ‘In the case of the United Kingdom, where we send steel to the United States that is vital for their businesses and their defence industry, it is patently absurd. 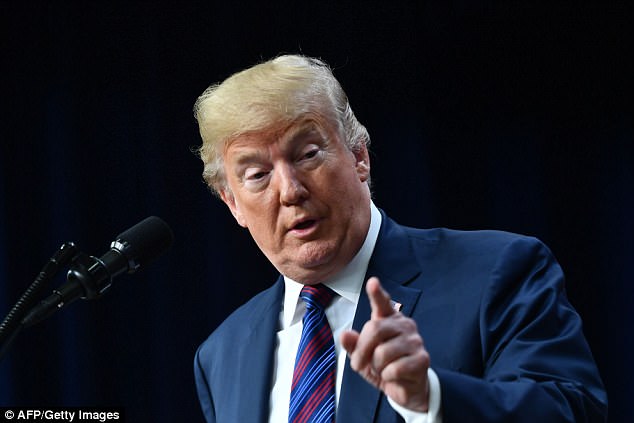 ‘We absolutely do not rule out counter-measures. And we do not rule out taking a dispute to the World Trade Organisation at Geneva. Obviously, we still hope the United States will think again about this. But it would be a great pity if we ended up in a tit-for-tat trade dispute with our closest allies.’

The tariffs were initially announced earlier this year but Brussels, which negotiates trade matters on the UK’s behalf, won temporary exemptions that were due to expire today.

Yesterday Mr Juncker insisted the bloc would impose its own levies on the US, claiming: ‘What they can do, we are able to do exactly the same.’ But his comments about greater links to Russia in response will cause unease across the EU. He said: ‘There are so many areas, so many domains where we can co-operate in a better way with Russia, not forgetting what our differences are. This Russia-bashing has to be brought to an end.’

Mr Juncker described the US decision as ‘totally unacceptable’, while insisting the EU ‘will not negotiate under threat’.

He said the bloc had ‘no choice’ but to take retaliatory measures, including complaining to the World Trade Organisation.

Downing Street, which wants a comprehensive trade deal with the US after Brexit, expressed frustration at the American decision.

A spokesman said: ‘We are deeply disappointed that the US has decided to apply tariffs to steel and aluminium imports from the EU on national security grounds. The UK and other European Union countries are close allies of the US and should be permanently and fully exempted from the American measures on steel and aluminium.’ 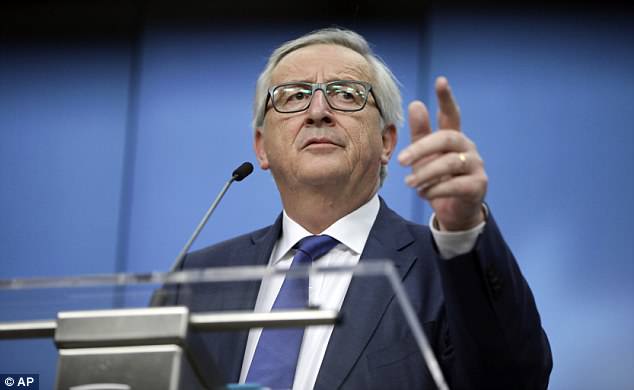 Meanwhile, European Commission chief Jean-Claude Juncker (pictured) called for the EU to respond by boosting ties with Russia – a move likely to cause discomfort in Downing Street

The European Commission plans to target US products such as Jack Daniel’s whiskey, Levi’s jeans and Harley-Davidson motorbikes. The imports, worth £2.5billion a year, will be hit by levies of up to 25 per cent from June 20.

The US shrugged off the implications for its economy, despite Mexico promising similar measures.

The decision to hit the EU, Canada and Mexico with tariffs caused tremors across financial markets and led to warnings from the steel industry. Gareth Stace, of manufacturer UK Steel, said: ‘President Trump had already loaded the gun and we now know that the US has unfortunately fired it, potentially starting a damaging trade war.

‘Unfortunately our pessimism was justified and we will now see damage not only to the UK steel sector, but also the US economy.’

About 350,000 tons of steel worth approximately £360million was exported from the UK to the US last year, making up 7 per cent of the UK’s output.

Trade expert Sam Lowe from the Centre for European Reform told The Times the UK is playing two games with the EU.

He says the government doesn’t want to appear too critical of Trump in light of Brexit but the UK is still hiding behind the bloc in the hope of curbing the measures.

Ben Digby, from the CBI, said: ‘There are no winners in a trade war, which will damage prosperity on both sides of the Atlantic.

‘These tariffs could lead to a protectionist domino effect, damaging firms, employees and consumers in the US, UK and many other trading partners.’ The British Chambers of Commerce said UK firms would become ‘collateral damage’ and a trade war would cause devastation in communities that rely on the steel industry.

The White House insisted the measures were needed to stop China, which is also subject to the tariffs, flooding its markets with cheap products. US commerce secretary Wilbur Ross, who will speak to Dr Fox again on Monday, said there was still room for compromise with the EU.

But he added: ‘Unfortunately it is not a situation that lends itself to a silver bullet of simply imposing tariffs or quotas on China itself.’

The US has used the threat of tariffs to try to win concessions from the EU, pushing for a quota on steel and aluminium imports and lower duties on US cars. French president Emmanuel Macron likening the threats to having a ‘gun pointed at our head’.

There was also opposition in the US from Mr Trump’s own party. Republican politician Kevin Brady said: ‘These tariffs are hitting the wrong target.’