Stepping in: Gavin Williamson set up a team to look at legal protections for ex-soldiers

A team has been set up to consider how to protect ex-soldiers from prosecutions for historical allegations, the Defence Secretary announced yesterday.

In a fresh bid to end the ‘witch-hunt’ of British troops, Gavin Williamson said the dedicated team will examine the legal protections of former and serving members of the military.

The announcement comes amid calls for a statute of limitations, or time limit, to protect ex-soldiers against ‘vexatious claims’ and probes into decades-old allegations.

During defence questions in the Commons, Tory former minister Sir Henry Bellingham asked Mr Williamson if he would bring forward legislative proposals for the move.

Mr Williamson replied: ‘I understand concerns over whether serving and former personnel are receiving the legal protection and certainty that they deserve.

‘I am therefore pleased to announce that I have established a dedicated team within the Ministry of Defence to consider this issue and to advise on the way forward.’

He said the team would not be looking at the issue in isolation but ‘right across the piste’, adding that the problem had gone on for ‘far too long’.

Mr Williamson said: ‘What we are really very keen to do is to find a long-term solution to help all service personnel – not just in terms of Northern Ireland – but also in terms of Afghanistan and Iraq and making sure that the vexatious claims are eliminated.’

Up to 1,000 ex-soldiers, many in their 60s and 70s, face the prospect of being named as potential murder or manslaughter suspects over historical killings at the height of the IRA’s campaign.

The Police Service of Northern Ireland (PSNI) has sparked anger by re-examining every single British Army killing during the Troubles.

There is outrage that hundreds of elderly UK veterans – many suffering serious illnesses – will be put through another ordeal.

And last year, a £57million taxpayer-funded Iraq Historic Allegations Team was shut down without a single soldier being prosecuted.

It was set up in order to ensure that allegations of misconduct against British soldiers were dealt with in the UK rather than being pursued at the International Criminal Court. But it was mired in controversy after ‘tank-chasing’ lawyers deluged it with vexatious claims. 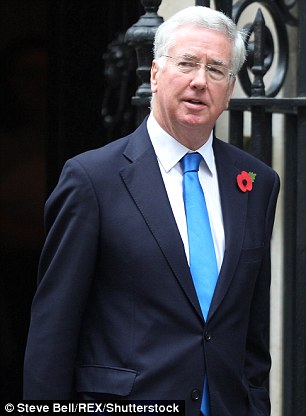 The unit was handed 3,668 allegations of murder, torture and wrongdoing by British troops since 2010, when it was established. The vast majority were from the now defunct firm Public Interest Lawyers, led by disgraced lawyer Phil Shiner.

Defence Committee chairman and Conservative MP Julian Lewis yesterday said his committee would ‘warmly welcome the setting up of a dedicated team’ within the Ministry of Defence to examine the issue.

A fierce Cabinet row broke out earlier this year when ministers apparently back-tracked on a pledge to introduce a statute of limitations which would have ensured UK veterans were protected legally from a new investigation.

In May, Northern Ireland Secretary Karen Bradley sparked anger by unveiling a consultation on the toxic legacy of the Troubles which did not include an amnesty for members of the security forces.

The Government believes it cannot do this without IRA terrorists being spared from investigations too, an option which would not be accepted in Northern Ireland.

On Friday, Defence Secretary Gavin Williamson came under fire for backing pardons for IRA killers as a price to end the witch-hunt of British troops.

He was slapped down by Downing Street for suggesting republican terrorists should be granted an amnesty in exchange for the same protection to Northern Ireland veterans.

Yesterday former Defence Secretary Michael Fallon tabled an amendment to a bill on Northern Ireland’s budget in a bid to block money for any prosecutions of ex-soldiers.

If passed, it would prevent any more public money being spent on investigating members of the Armed Forces who served in Ulster before the Good Friday Agreement in 1997.

He said: ‘It is morally wrong that those who served to keep us safe from terrorism should be threatened with possible imprisonment in respect of allegations made thirty or forty years ago which have already been investigated, while some of the terrorists themselves have been guaranteed immunity from prosecution through comfort letters.

‘We need to stop hounding our own brave servicemen and women, and stop it now.’