A recovering heroin addict who made international headlines after sharing photos of herself at rock bottom has revealed how her children gave her a new lease on life.

Melissa Lee Matos, 40, shocked the world with photos that showed her in the throes of addiction, her face covered in scabs and eyes rolling to the back of her head.

‘I was so lost I couldn’t imagine a life without using,’ Matos wrote in a frank Facebook post at the time. ‘I just wanted to die. I didn’t realize I was hardly alive.’

But that all changed when Matos, of Parkersburg, West Virginia, realized she could lose her daughters, the two most important things in her world. 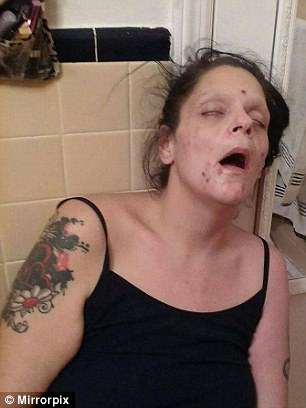 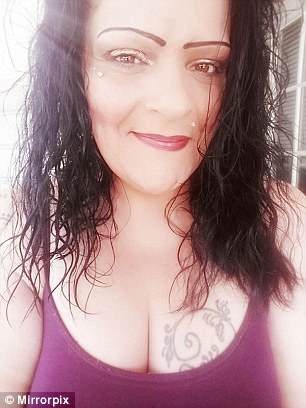 Recovering heroin addict Melissa Lee Matos, 40, has revealed how her children have given her a new lease on life after she shared shocking photos of herself at rock bottom 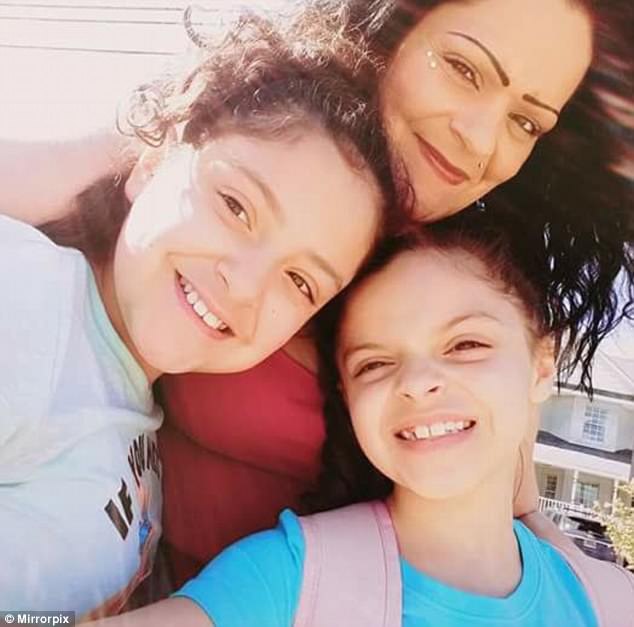 Matos, of Parkersburg, West Virginia, said she finally found sobriety when she realized she could lose her daughters, the two most important things in her world

There was once a time when it was Matos’ daughters that were taking care of her.

Matos recalled her eldest daughter Katherine, now 11, bringing her food and rubbing her head to make her feel better when she was ‘sick’.

What her daughter didn’t know at the time was that Matos had locked herself away for hours, shooting up heroin or snorting Xanax.

‘[She] would…stay by my side, like a mother would when her child was sick,’ Matos told The Mirror.

‘She would watch her little sister, help her with homework, help get her ready for school. All things a mom would do that, at the time, I was not capable of doing.’

As Katherine became the ‘mommy of the house’, Matos descended deeper into an addiction she said began after she was prescribed drugs for postnatal depression and pregnancy complications. 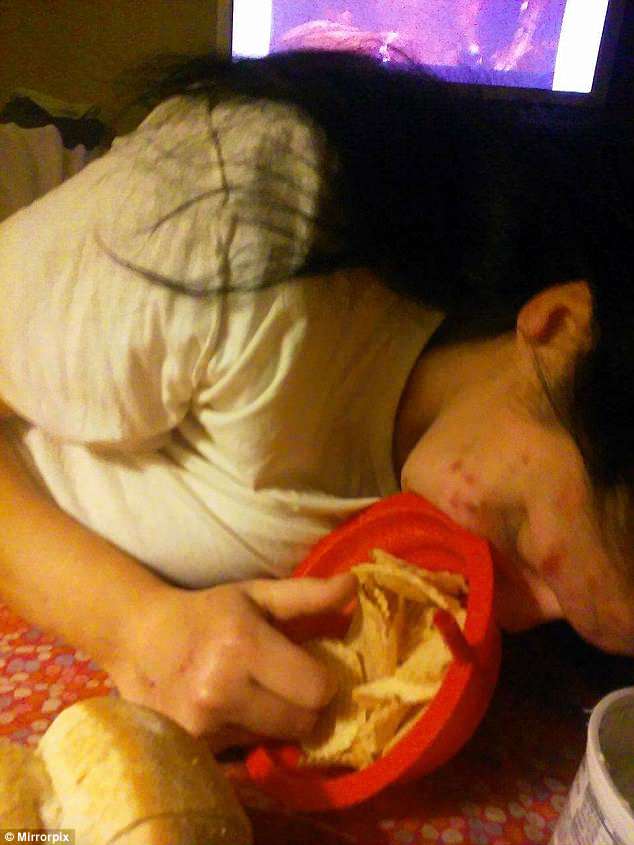 ‘I spent most of my days either high or dopesick,’ she recalled. ‘The mixture of all of these drugs would turn me into a zombie.’

Matos would lock herself away from her daughters in the bathroom or her bedroom for hours while she used.

‘What I recall the most was my bedroom,’ she said. ‘My walls had blood spatters from trying to unclog needles.’

‘My bed sheets always had blood, and cigarette burn holes from falling asleep after using heroin or Xanax.’

Matos said her daughters never saw her doing drugs and that the needles were always ‘immediately’ put away in a lock box by her ex-husband.

But as the years went on, Matos’ addiction began to spiral out of control and she soon began ‘lying, robbing, and stealing’ to get her fix. 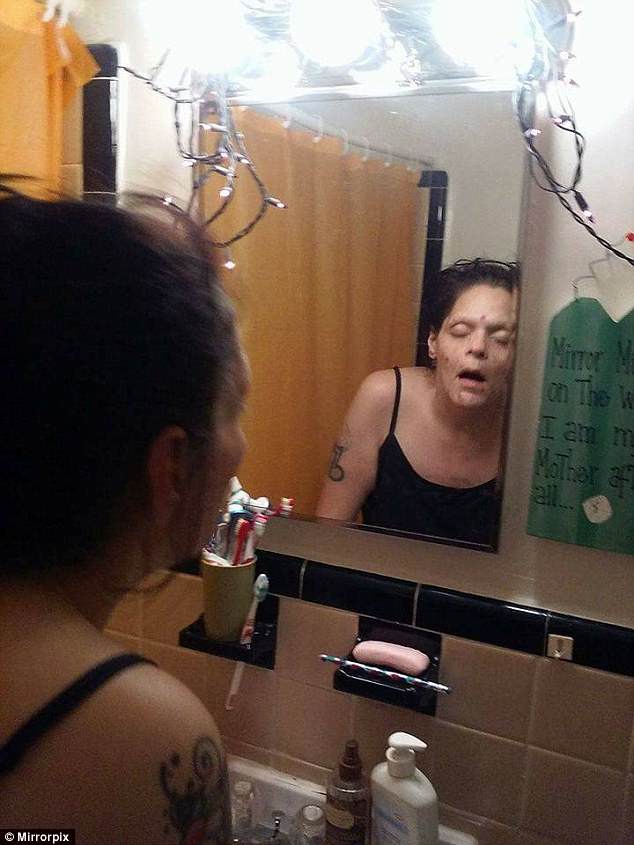 ‘If crack was around, I smoked it. If pills were around, I snorted them,’ Matos said. ‘It didn’t matter. I hated myself, hated my life.’

Matos said the family house was in ‘shambles’ and her daughters ‘constantly missed school’.

‘I was careless, irresponsible, and cold,’ she said. ‘I was absent as a mother, a wife, a daughter, a friend. I began to lose everything and everyone.’

Matos said her oldest daughter still talks about the pain she felt during those years.

‘My oldest will talk about how it hurt her, because I was always locked away in my room and I ignored her,’ she recalled. ‘How it was scary seeing me high.’

Matos overdosed in 2015, her life saved by paramedics. Her daughters had been playing right next door from her bedroom. 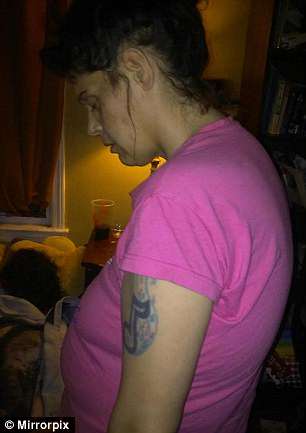 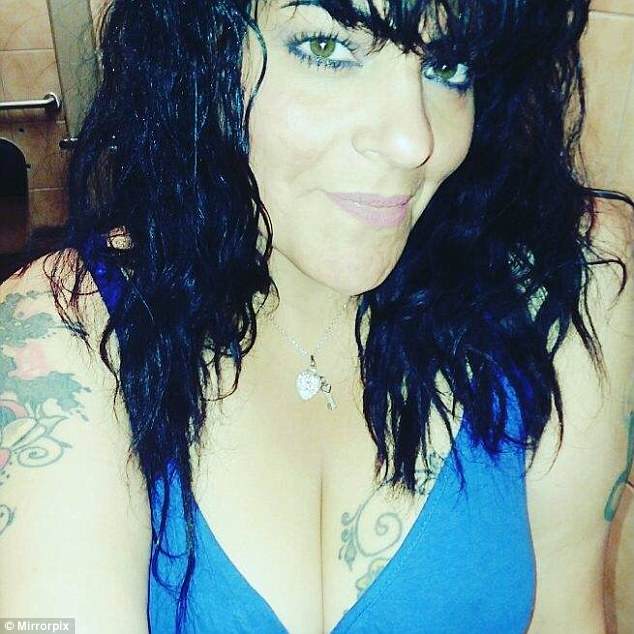 After failing a urine test, Matos nearly lost her daughters. That’s when she decided something needed to change 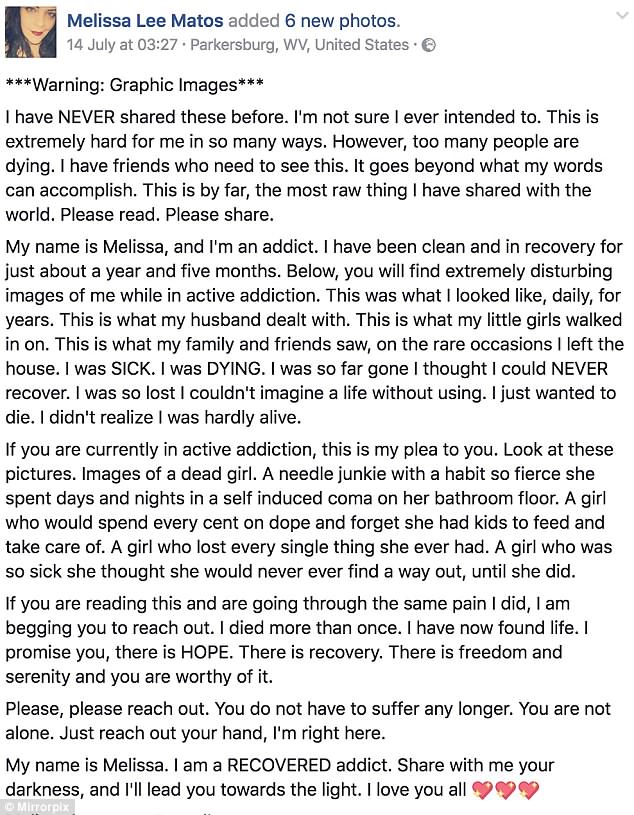 Matos became sober on March 1, 2016 and shared images of her in the throes of addiction to help others with their recovery

After she returned from the hospital, her daughters began living with her parents. But the near-death experience wasn’t enough to scare Matos to sobrierty.

‘It was one of the lowest moments of my life,’ she said. ‘Still, I was so sick in my addiction, that didn’t stop me.’

‘I got home and shot up the same fentanyl that had just almost taken my life.’

Matos would go on to lose two apartments and ‘just about all’ of her possessions as she sunk deeper and deeper into addiction.

She would cheat the urine tests of her Intensive Outpatient Program, but one day was so high that she forgot and failed.

It was the day she nearly lost everything. 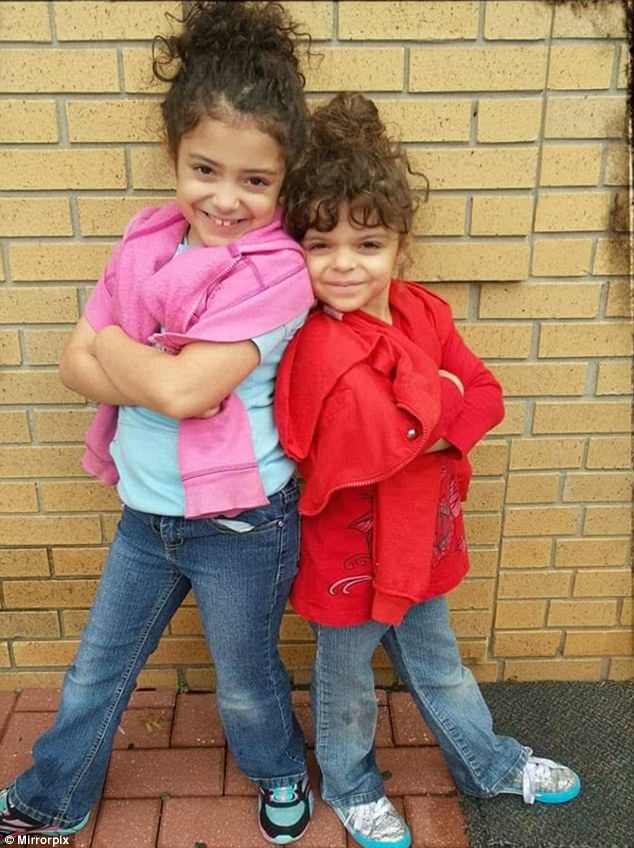 Now Matos posts smiling photos of her and her daughters, aged nine and 11, to show just how far she and her family have come 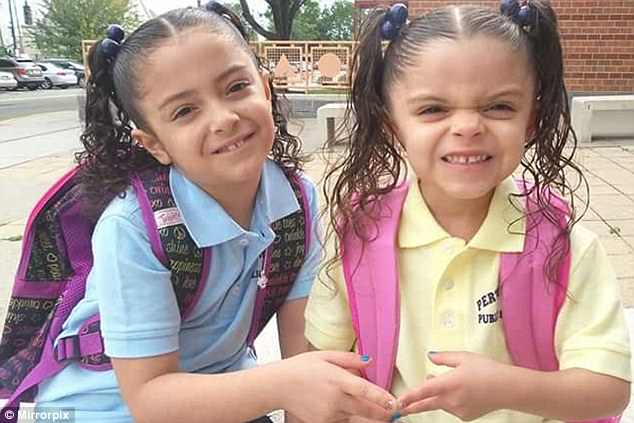 ‘That was the day I found sobriety.’

Matos has been sober since March 1, 2016, and began sharing photos of her past – and all the details that come with it – to help others become clean.

She also works with Alcoholics Anonymous and helps mothers who are addicts or in recovery.

Now Matos posts smiling photos of her and her daughters, aged nine and 11, to show just how far she and her family have come.

‘Share with me your darkness,’ she told her Facebook followers. ‘And I will lead you toward the light.’