This is the moment an argument which caused a plane to be sent back to Stansted Airport just 15 minutes into the journey breaks out on a Ryanair flight.

Footage from inside the Lisbon-bound aircraft shows two passengers shouting at each other while several others stand around them in the plane aisle.

Another short clip shows a man wearing a cap being taken off the flight by armed police officers as other passengers cheer, clap and shout ‘out.’ 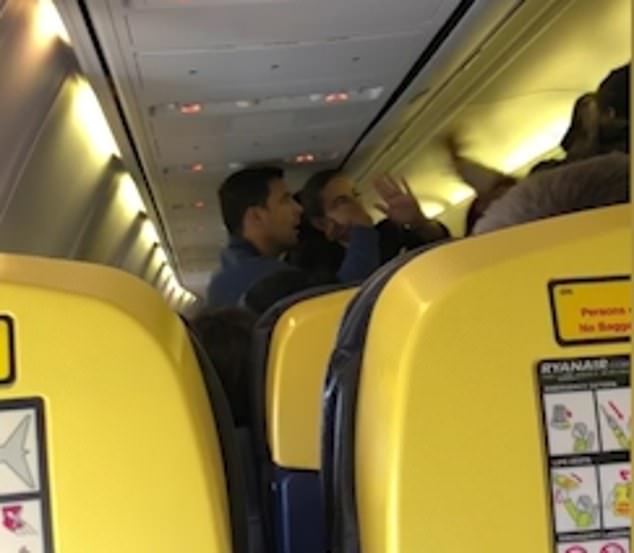 A man who was on the flight said: ‘There wasn’t an actual fight, no one got punched it was just threats.

‘Apparently one of the guys was stepping on the other, so he pushed him.

The witness then explained that a mobile phone was dropped and the men started to threaten to fight each other.

He said: ‘We all had to leave the plane and wait for 14.15 to board the next one. The first plane was schedule to arrive at 14.40 to Lisbon.

‘The guy on the last clip was immediately taken of the plane, while the second stayed inside answering some questions to the police. 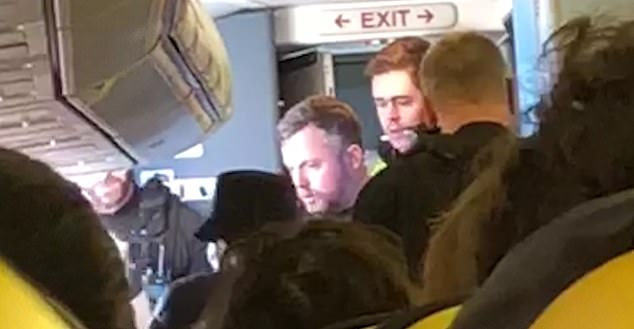 ‘While we never saw the first guy again, the second one was able to board the second flight.

‘I don’t know what he said, but they were both involved in this whole situation, and despite one being more aggressive than the other, he didn’t behave correctly.

‘He might have started it but the other didn’t help with the situation, he just made it worse.’

Other customers on the flight to Lisbon yesterday described the ‘scary’ moment the jet was turned back to Britain after just 15 minutes in the air.

Witnesses said police with guns entered the jet ‘like something out of a movie’ to remove the fighting men in an incident that left children in tears. 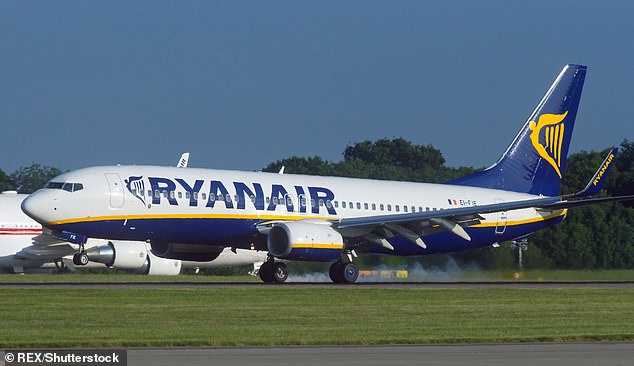 One witness said the situation was ‘very intense and scary, kids crying, looked like something out of a movie.’

The flight, FR1886, heading towards Lisbon, Portugal, from Stansted, departed at the scheduled time at 11.50am but then had to divert back to the airport.

A spokesman for Essex Police said: ‘We were called to reports of a passenger being disruptive on a Ryanair flight from Stansted to Lisbon at around 12.45pm today (Thursday, December 13). The flight redirected back to Stansted Airport.

‘We established there had been an argument between two passengers.

‘After speaking to both individuals, one was removed from the flight and reported for a public order offence.’

A Ryanair spokesman said: ‘This flight from London Stansted Airport to Lisbon returned to Stansted shortly after take-off after a number of passengers became disruptive inflight.

‘The aircraft landed normally and was met by police upon arrival. The aircraft will depart to Lisbon shortly.

‘We will not tolerate unruly or disruptive behaviour at any time and the safety and comfort of our customers, crew and aircraft is our number one priority. This is now a matter for local police.’