THIS is the moment a "baby mama" crashed her lover's wedding moments before he was due to exchange vows.

Video of the row has surfaced which shows the bride and groom at the makeshift altar in a gazebo before a woman starts to shout from the audience. 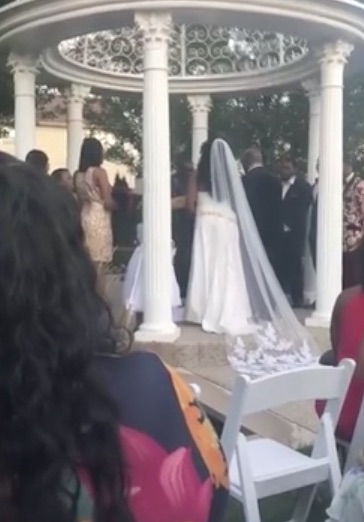 "Anthony. You’re acting like you don’t know me…I got your baby here," the alleged "baby mama" is heard shouting in front of the shocked guests.

Chaos ensues at the wedding as another woman – who appears to be the bride's daughter – storms into the audience saying "what is wrong with you?".

The clip begins as the pastor carries out the ceremony which is said to have occurred in Detriot, Michigan.

Wedding guests are seen seated on white folding chairs during the outside ceremony around the gazebo.

And then the bride, groom and the rest of the party are gathered beneath the elaborate structure.

Other members of their party surround them – with some carrying flowers for the big day.

The groom – named in the clip as "Anthony" – is told by the pastor he needs to "afford all the respect that a husband owes to his wife".

And then the bride – named by the pastor as "Kim" – is asked if she will take Anthony to be her wedded husband.

Suddenly, a voice can be heard shouting "really, Anthony?" from the seated crowd as guests turn around to see what is going on.

The camera remains fixed on the ceremony as the off-screen voice berates the couple. 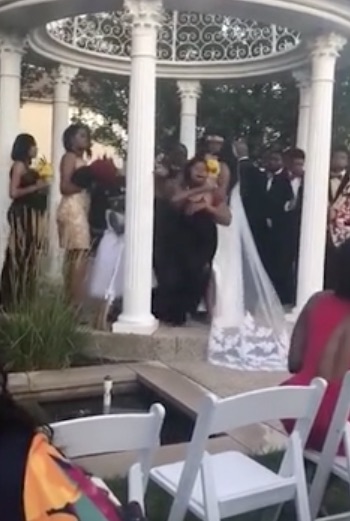 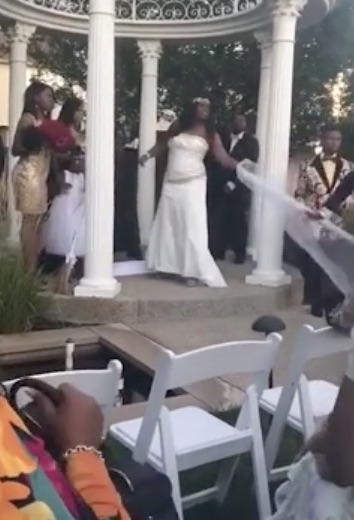 "You're gonna act like you don't know me, didn't you take your psych meds today?," the woman can be heard yelling.

She continues: "I got your baby here, Anthony I know you hear me."

And then suddenly, a woman in a black dressstorms pass the bridge and groom as she lunges into the auidence.

Other guests leap from their seats to try and stop her as the woman – apparently bride's daughter – yells "you better get out of my momma’s wedding".

Other voices can be heard saying "you're crazy" and "holy s***" as the couple's happy moment is almost spoiled.

A second clip uploaded to YouTube on July 30 appears to show the wedding carrying on with the bride then shouting her vows as the guests applaud.

Cheers and applause then erupts after some urging from the pastor – and its unclear what happened to the wedding crasher.

While the second half of the clip was uploaded yesterday, the original video has resurfaced after first being uploaded in August 2019.

It has been viewed almost 1.8million times on YouTube and received more than 32,000 likes.

The identities of the couple and the "baby mama" are unclear and its unclear what happened after the wedding.