This is the shocking moment three masked burglars armed with crowbars broke into a family in a daylight raid while the homeowners were out on a bike ride.

Jon Lucas had just left his home in Alderholt, Dorset to go on a bike ride with his nine-year-old daughter when the trio broke in through the back door on Wednesday.

CCTV shows them noisily opening and closing drawers and cupboards and rifling through Mr Lucas’ belongings in search of money and valuables.

The trio can be heard telling one another to be ‘quick’ before they fled the property with cash and jewellery less than five minutes after breaking in. 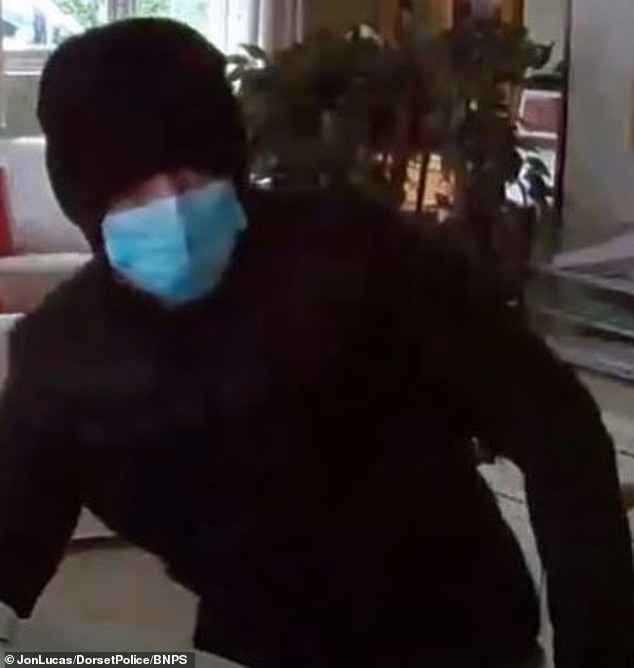 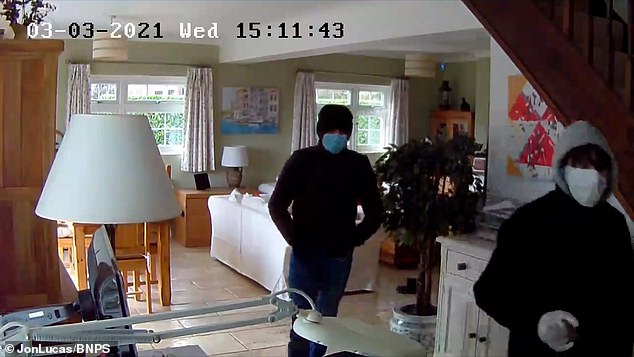 Mr Lucas, 54, returned a short time later to find his Dorset home had been broken into by three men after watching the CCTV back.

The burglars left behind two crowbars in an upstairs bedroom. Mr Lucas said the police have tested them for DNA and fingerprints but have not revealed the results.

The father has now released the footage of the break in a the hope members of the public might be able to identify them.

‘As soon as we got home I saw a for was open and the lock had been forced and I knew straight away what had happened,’ he said. ‘I thought at that point it was one burglar who might still be inside so I went in prepared to confront him.

‘The upstairs had been completely trashed. The drawers ad cupboards were open and clothes all over the bed. They were obviously looking for jewellery.

‘When I looked back at the CCTV I was horrified to find it was three of them with crow bars. They were absolutely determined they were going to break in and nothing or nobody was going to stop them.

‘The worst thing was seeing the dog. We think he had been hit by them when they entered the house because there is no way he would have backed off like he did. That evening he was off his food and just lay there.’

Detective Sergeant Karen Penn, of Dorset Police, said: ‘Officers have been carrying out a number of enquiries into this incident so far, including an examination of the scene and house-to-house visits.

‘I am issuing CCTV images of three men I would like to try and identify as part of my enquiries. While I appreciate they have their faces covered, I am hoping someone may recognise them from their build and clothing.

‘If anyone has any information about who they are, please get in touch.

‘I am also keen to hear from anyone who may have witnessed any suspicious activity in the Hillbury Road area around the relevant time.’