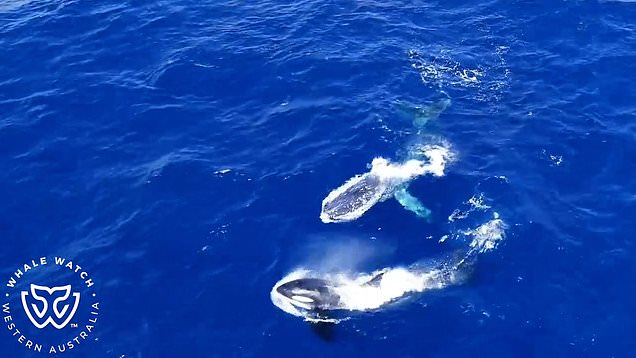 A pod of orcas appeared to help free a humpback whale that had become entangled in rope off the coast of Australia.

But they chose to take this one off the menu and instead helped rescue it in a rare encounter spotted by whale-watchers near Bremer Bay, Western Australia.

‘It would usually be part of their diet so when we saw the injured humpback and the approaching orca, we were concerned,’ Whale Watch Western Australia’s Gemma Sharp Sharp told the Mandurah Mail.

The group said it was the first time the Orcas had been known to help another species in this way.

Onlookers expected the trio known as Hookfin, Blade and Matriach Queen, to feast on the animal but instead they appeared to lose interest once the humpback was set free.

‘Lifting his fluke (tail) we could see that this humpback whale was entangled and our hearts sank, (it is) a terrible situation to be in when trying to defend yourself against the ocean apex predators,’ a statement from Whale Watchers Western Australia read.

‘He rolled and during this process we could see Blade swimming directly underneath his fluke and looking at the rope entanglement… the orcas then charged towards the humpback while he defended himself with pectoral fins and fluke swiping.

‘Matriarch Queen arrived and moved towards the humpback whale which caused a commotion of white water and then something incredible happened – a large chunk of the green rope that was entangling the humpback floated free behind him.’

Once the humpback was free, the orcas were seen leaving the area.

It has been speculated that the orcas avoided eating the whale because they could sense it was malnourished, having been trapped in the rope for some time.

It is not known why the humpback had been swimming in Western Australian waters in the first place. They usually prefer to feed in Antarctica in January.