The Jeremy Corbyn supporters’ group is at the centre of a row over supposed bias in favour of the Conservatives on the BBC.

Labour Party activists have accused the broadcaster of lying about its standing in polls to attack their shadow home secretary, Diane Abbott.

They are urging viewers to register support for the Hackney MP in an online petition that demands an apology from the BBC.

More than 24,000 people have signed the petition after Ms Bruce faced accusations that she treated Ms Abbott unfairly compared with other panellists during Thursday’s show. 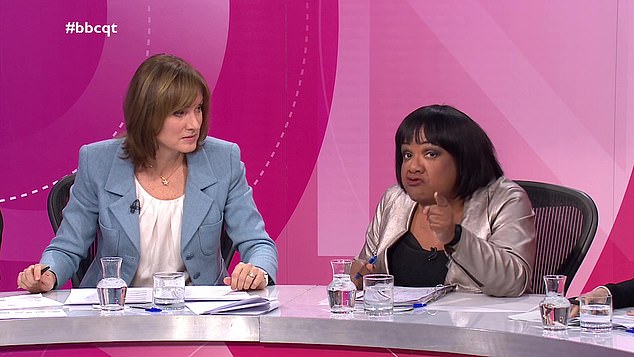 Fiona Bruce is pictured with Dianne Abbott on Question Time.  She has been accused of suggesting that Diane Abbott only got her job as Shadow Home Secretary because she had been Jeremy Corbyn’s lover in the 1970s

The hard-left pressure group have accused the BBC of bias against Diane Abbott and are urging people to sign a petition that has so far garnered more than 24,000 members 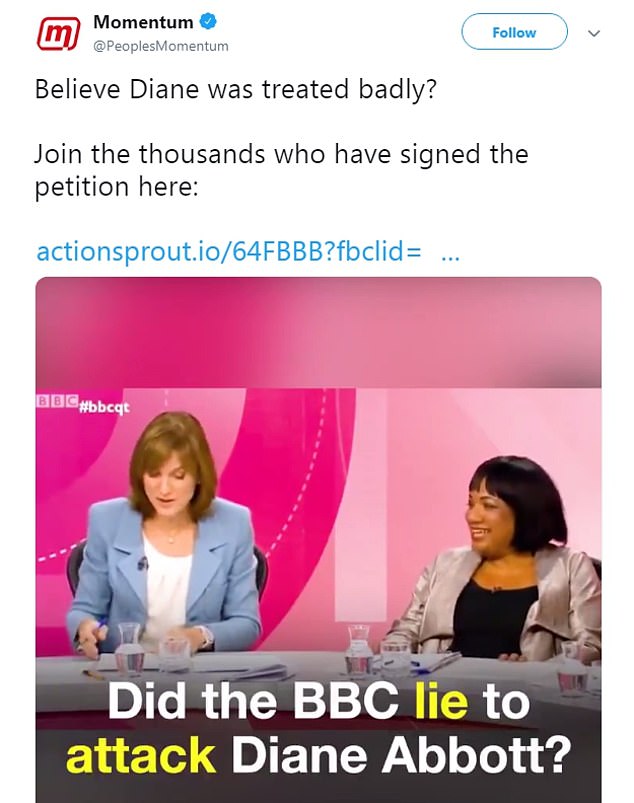 Other online activists have dragged Ms Bruce’s businessman husband, Nigel Sharrocks, into the row, mentioning his former role with an advertising company which had dealings with the Conservative government.

Critics of the broadcaster have suggested on Twitter that a previous contract makes Mr Sharrock partial to the government. They have suggested that if he backs the Tories then his wife must too.

The row started when Twitter users who said they were audience members claimed that Ms Abbott was targeted in the warm-up to the show.

One claimed that the producers ‘stoked up the anti-Dianne [sic] Abbott sentiment’ in an ‘appalling’ manner.

But today audience member Harry Lister, who was shown asking a question on the show, told The Daily Telegraph that there ‘was nothing untoward’ in the treatment of Ms Abbott.

‘It’s categorically untrue to say that Fiona Bruce said Diane Abbott owed her seat to a past relationship with Jeremy Corbyn,’ the 22-year-old said. ‘That’s not what she said at all. All she said was that they had once been romantically involved. That’s it.’ 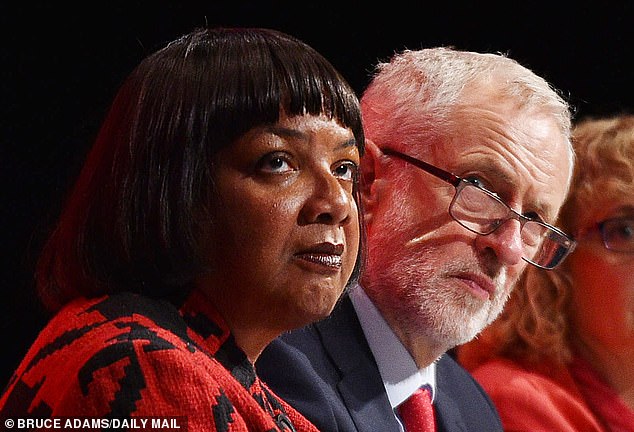 New Question Time host Fiona Bruce has been accused of suggesting that Diane Abbott, pictured above, only got her job as Shadow Home Secretary because she had been Jeremy Corbyn’s lover in the 1970s [File photo]

Mr Lister said Ms Bruce made the remark while giving brief descriptions of the people appearing on the panel for the benefit of the audience as they filled out forms to put questions forward.

Conservative MP Philip Davies told the paper that Momentum was undertaking ‘an orchestrated campaign to bully and intimidate anyone who might say something they disagree with’. 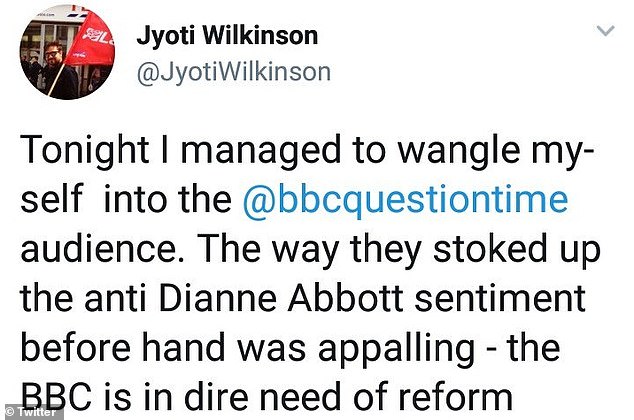 Recent polls have put the two parties neck-and-neck, with some putting Labour ahead and others showing a five-point Tory lead.

The BBC said that it should have been clearer about what the polls said but denied treating Ms Abbott unfairly.

‘We are sorry to hear Diane Abbott’s concerns over Thursday night’s edition of Question Time and we have contacted her team today to reassure them that reports circulating on social media are inaccurate and misleading,’ a spokesperson said.

‘Diane is a regular and important contributor to the programme. As we said earlier, we firmly reject claims that any of the panel was treated unfairly either before or during the recording.’

The Labour Party has demanded that the BBC release footage of the exchange that took place before the show went live and described comments about Ms Abbott’s relationship with Corbyn as ‘sexist’.

The broadcaster has also confirmed it has received a complaint from the Labour Party and that it will respond.