A 6.6 magnitude earthquake has struck off the coast of Java in Indonesia.

The monster earthquake hit at 9.54am AEST on Tuesday and has been felt as far as 800 kilometres south east in Bali.

The earthquake hit around 93.8 kilometers north of Batang, a coastal town in Central Java province, The U.S. Geological Survey reported.

The Bureau of Meteorology said there is no threat of a tsunami and no injuries have been reported.

A 6.6 magnitude earthquake has struck the Java Sea off the Indonesian coast

The epicentre was measured at a depth of 528 kilometres after the earthquake hit.

One person shared on social media they felt their apartment shaking in Ubud for around two minutes.

No serious damage to any buildings or homes have been reported.

Indonesia is prone to earthquakes due to its location on the Pacific Ocean’s ‘Ring of Fire’ which holds the majority of the earth’s volcanoes. 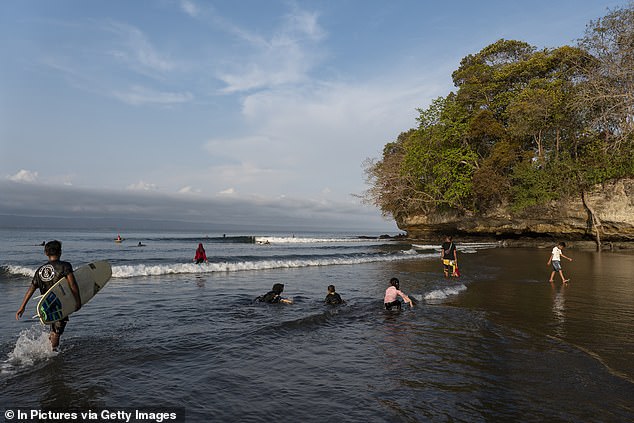 No injuries or serious damage to homes or buildings has been reported from the earthquake that hit around 93.8 kilometers north of Batang in the Java Sea (pictured: beach goers in Batu Karas beach in Java)