The moon will turn a stunning blood red this Friday for the longest total lunar eclipse this century lasting nearly two hours.

Total lunar eclipses turn the moon red when the Earth passes between the Sun and the moon and casts a shadow on it.

When the white light from the Sun hits the Earth’s atmosphere the blue colours in the white are scattered, meaning only the red colours will hit the moon giving it an eerie tint.

The lunar event will last for 103 minutes — four minutes short of the longest possible duration an eclipse could last. 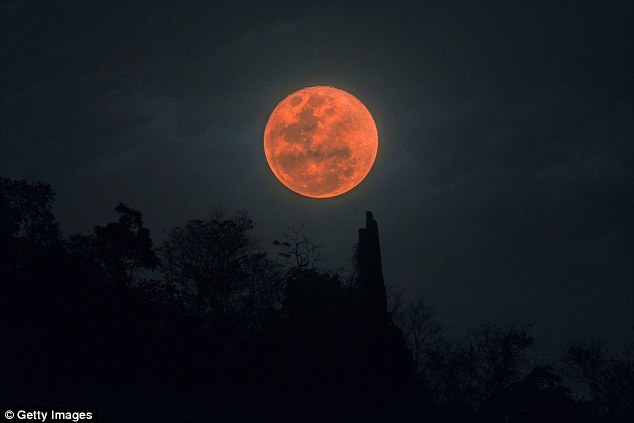 The moon will turn a stunning blood red this Friday for 103 minutes – the longest total lunar eclipse this century (pictured: full lunar eclipse in Thailand in January)

The UK falls slightly outside of the ideal viewing range, meaning people will see the full eclipse for only 84 minutes of the total time.

This is due to the moon being below the horizon in Britain when the eclipse begins.

Swathes of eastern Africa, the Middle East, and central Asia are in the perfect spot for the eclipse, meaning they will be able to see it in its entirety – provided the weather is good.

The total eclipse will begin at around 8.30pm in the UK on July 27 and finish at 10.13pm. From then until around half 12 there will be a partial eclipse.

Stargazers can expect to see the blood moon from around 8.50pm.

To get the best view of the eclipse, make sure you are in an area with low-light pollution. For example, high vantage points in a built-up area, or ideally, a trip to the countryside should provide the best view.