At least 10 people were killed in Myanmar after violent crackdowns on anti-coup protesters on Saturday, making it one of the deadliest days since the military regime took power last month.

Four protesters were killed, and 19 others were injured with nearly half of them in critical condition in Sein Pan ward of Mandalay, the nation’s second largest city, according to authorities. Witnesses and local media outlets said three protesters were killed in Yangon overnight, two died in the Bago region and one protester was shot dead in the Magway region. 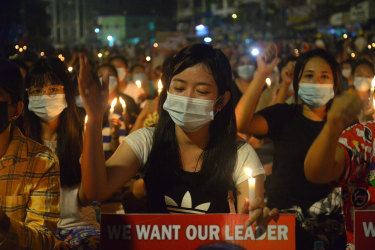 Soldiers and riot police have forced striking public servants and employees in certain sectors to return to work as the civil disobedience movement threatens a collapse in services including banking, healthcare, education and transportation. The junta asked all banks to reopen on Monday, and said actions would be taken if lenders fail to obey.

The junta’s lead spokesman, Zaw Min Tun, reiterated on Thursday that minimal force was used to disperse protesters, even as witnesses say live bullets continued to be utilised.

Zaw Min Tun said security forces will continue to enter some properties to search for protest instigators in some townships, which he added was “to ensure safety and the rule of law.”