More than 750 people may have missed out on their right to vote because of pilot schemes requiring them to prove their identity.

Labour claimed the voter ID trials were evidence of a ‘blatant attempt by the Tories to rig the result of future elections’ and called for the programme to be abandoned. 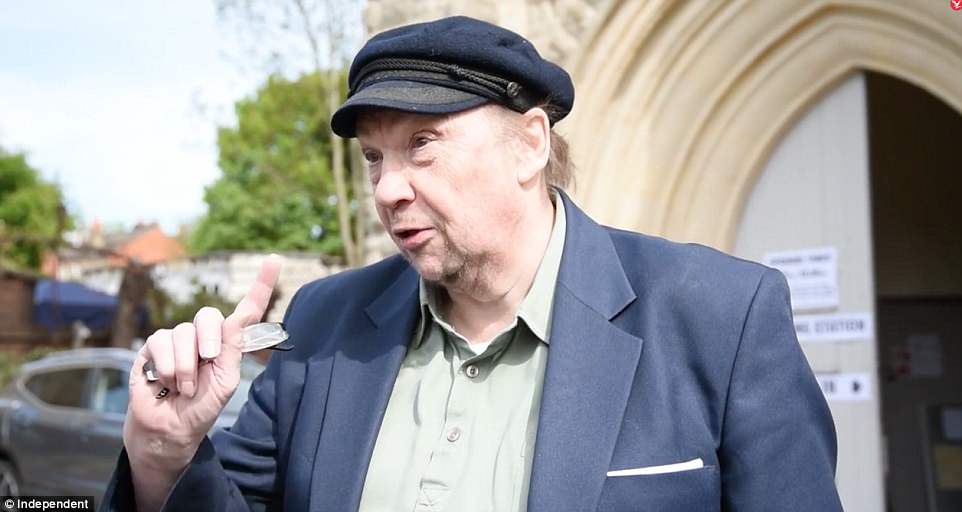 Peter White, 76, pictured, was ‘shocked’ to be turned away from the polling booth at Bromley because he did not have the correct ID in May 2018

But the Government insisted the schemes revealed requiring voters to show ID was a ‘reasonable and proportionate measure’ to tackle electoral fraud.

A review published by the Electoral Commission found up to 2,083 voters were initially refused a ballot paper because they lacked the required ID, and up to 758 of them did not return to cast their vote.

Out of all those who went to their polling station in the pilots, the proportion who could not show ID and who did not return to vote ranged from 0.03% to 0.7%.

Electoral Commission director of communications, policy and research Craig Westwood said: ‘Nearly everyone in the pilot areas who went to vote at their polling station was able to show the correct ID without difficulty.

‘Important questions however remain about how an ID requirement would work in practice, particularly at a national poll with higher levels of turnout.

‘As the pilots have taken place in a limited number of areas and at local elections, we are not able to draw definitive conclusions from them.

‘Government and Parliament now need to consider carefully the available evidence about the impact of different approaches, on the accessibility and security of polling station voting.

‘In addition to the pilots held in England, it will be important to reflect on the experiences of voters in Northern Ireland where voter ID has been a requirement for many years.’ 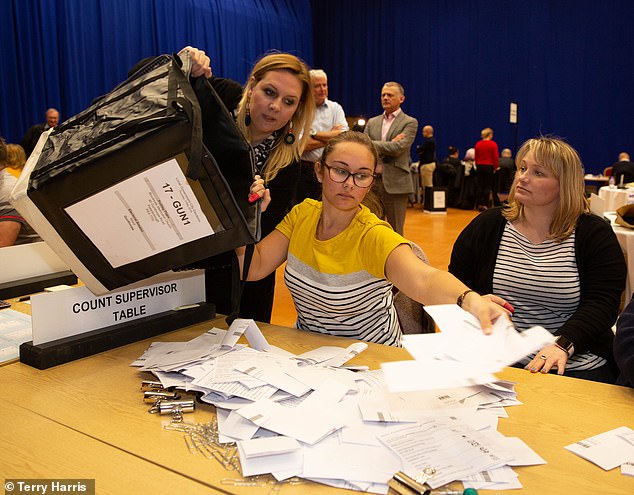 Votes are counted during the May 2019 in Peterborough, which the Conservatives lost

In a written statement to MPs, Cabinet Office minister Kevin Foster said the pilots were successful and ‘the overwhelming majority of people who came to polling stations were able to cast their vote without difficulty’.

He said: ‘Electoral fraud is an unacceptable crime that strikes at a core principle of our democracy – that everyone’s vote matters.

‘In our current system, there is undeniable potential for electoral fraud and the perception of this undermines public confidence in our democracy.’

He confirmed the Government’s intention to roll out voter ID requirements across the country.

But Cat Smith, shadow minister for voter engagement, said: ‘It is now clear that the Government’s fixation with voter ID is a blatant attempt by the Tories to rig the result of future elections by voter suppression.

‘For years Labour warned that restrictive identification requirements will make it harder for people to vote.

‘But the Government refused to listen, denying countless citizens a voice in our democratic process.

‘We cannot allow the Tories to shut down democracy, which is why we are calling for these undemocratic and unpopular pilot schemes to be abandoned immediately.’