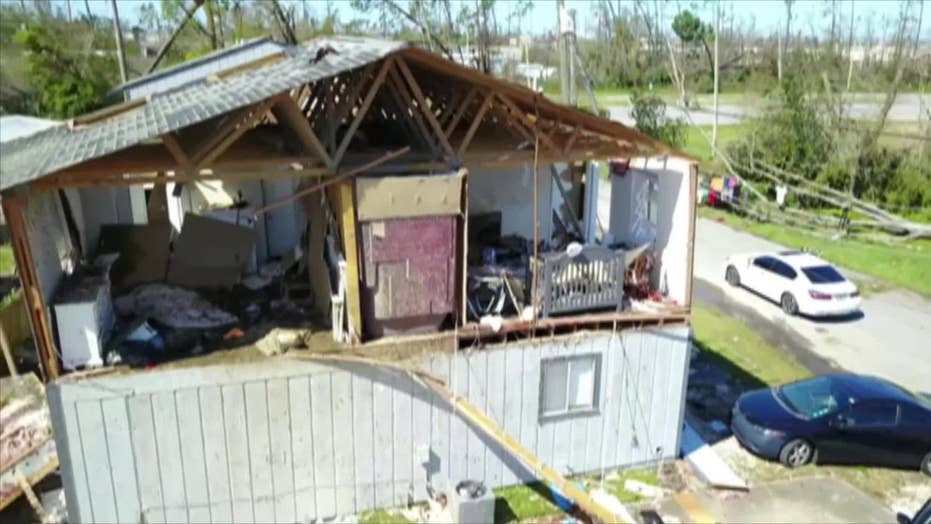 Aerial drone footage captures the absolute destruction in the aftermath of Hurricane Michael. This compilation highlights the power of the storm and what residents face in the weeks ahead.

Ranging from a pair of destructive Atlantic hurricanes to storms that produced hail the size of baseballs, 2018 was another year where numerous weather-related events each racked up more than $1 billion in estimated damages. Here are five of the costliest storms to have battered the U.S. this year, based on data from the National Oceanic and Atmospheric Administration.

American flag that braved the storm in North Carolina auctioned for over $10,000; Richard Neal, who flew the flag, and Mike Caruso, who won the bid, speak out on ‘Fox &amp; Friends.’

The Category 1 Hurricane that slammed into the Carolinas in mid-September has no damage estimate yet from the NOAA, but Moody’s Analytics is pegging it – and the economic losses that it brought to the region – to be somewhere between 38 and 50 billion dollars. The hurricane made landfall on Wrightsville Beach, N.C. and its “surges, winds and rains brought unprecedented devastation to our state, causing an estimated $17 billion in damage,” North Carolina Gov. Roy Cooper said. In addition to causing 51 deaths, the storm also made headlines for kicking off a period of extensive flooding in the Carolinas, which claimed the lives of at least 3.4 million chickens and turkeys.

The Category 4 Major Hurricane is estimated by insurance broker AON to have caused at least $15 billion in damage and economic losses since making landfall in the Florida panhandle, with public and private insurers likely seeing a bill of more than $8 billion. It is believed to have killed at least 45 people in the U.S. and drone footage captured in the aftermath revealed the absolute destruction the hurricane brought to many communities. Hurricane Michael also set a record in becoming the most powerful hurricane to ever make landfall across the U.S. in the month of October, and the strongest since Hurricane Andrew back in 1992.

A powerful nor’easter barreled into the East Coast, bringing heavy rain, strong winds and wet snow as residents from the mid-Atlantic to Maine braced for coastal flooding.

A powerful Nor’easter that churned along the East Coast over a three-day period in early March left nine people dead and some parts looking like a “war zone,” residents said. Wind, snow, rain and flooding knocked out power for more than 2 million homes and businesses from North Carolina to Maine, with gusts reaching up to 90 mph in some parts of coastal Massachusetts. Those who were in the air as the storm hit also were not spared. "Pretty much everyone on the plane threw up," one pilot wrote in a report to the National Weather Service after landing an aircraft in Dulles Airport outside Washington, D.C.

A mid-summer storm system that passed through an area dubbed “Hail Alley” dumped chunks of frozen rain the size of baseballs in some parts of Colorado, impacting homes, businesses and vehicles from Denver to Fort Collins. Those who hit the links in the days after the storms posted images on social media of golf ball-sized chunks of hail they found on courses.

Weeks after the costly Nor’easter, the Southeast region of the U.S. was hit with its own damaging storms, which spawned more than 20 tornadoes across Alabama and pelted communities from Texas to Florida with hail, the NOAA said. One neighborhood outside of Atlanta looked like “someone did a bombing run down the street," Georgia's insurance commissioner recalled, and State troopers who toured the damage in Jacksonville, Ala., said it also resembled a “war zone”. Jacksonville State University later released a video compilation of surveillance footage recorded during the moments an EF-3 tornado plowed through its campus, toppling bookshelves in its library and sending rain and debris swirling through the hallways of its buildings.