Soldiers from India and Pakistan have targeted each other along the volatile frontier in disputed Kashmir, killing at least six civilians and wounding four others, officials have said.

The three died after a shell fired by Pakistani soldiers hit their home in Poonch region near the so-called Line of Control that divides the Himalayan territory between the two nuclear-armed rivals, police said.

The children’s father was critically wounded and has been hospitalised. It is not known which country the other three civilians originated from.

Pakistan’s military also says two of its soldiers have been killed in an exchange of fire with Indian forces, marking the first fatalities for Pakistani troops since Wednesday.

Tensions have been running high since Indian aircraft crossed into Pakistan on Tuesday, carrying out what India called a pre-emptive strike against militants blamed for a February 14 suicide bombing in Indian-controlled Kashmir that killed 40 Indian troops.

Pakistan retaliated, shooting down a MiG-21 fighter jet on Wednesday and detained its pilot, who was returned to India on Friday in a peace gesture. 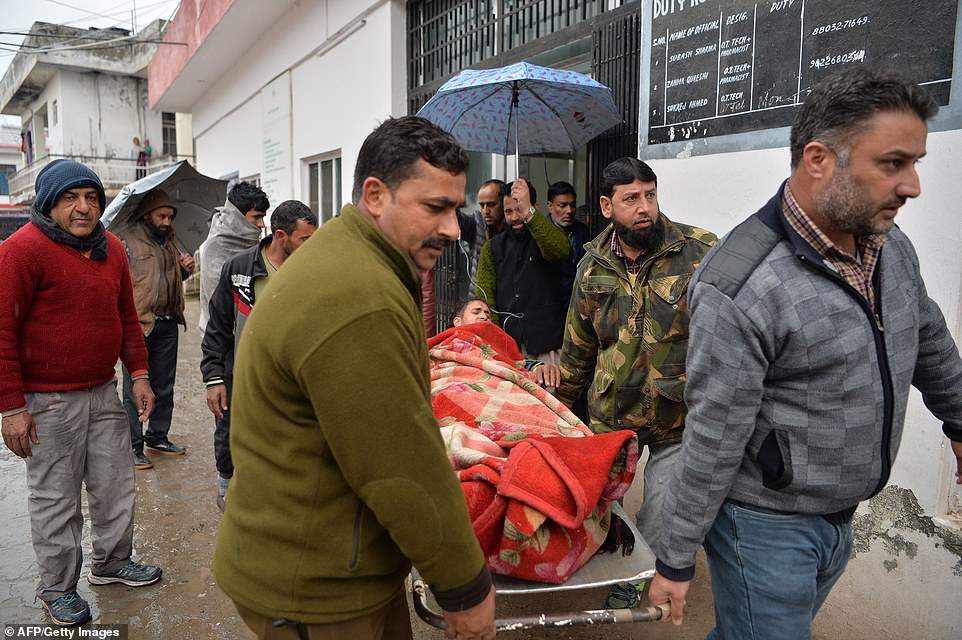 Soldiers from India and Pakistan have targeted each other along the volatile frontier in disputed Kashmir, killing at least six civilians and wounding four others. Pictured: one of the injured men 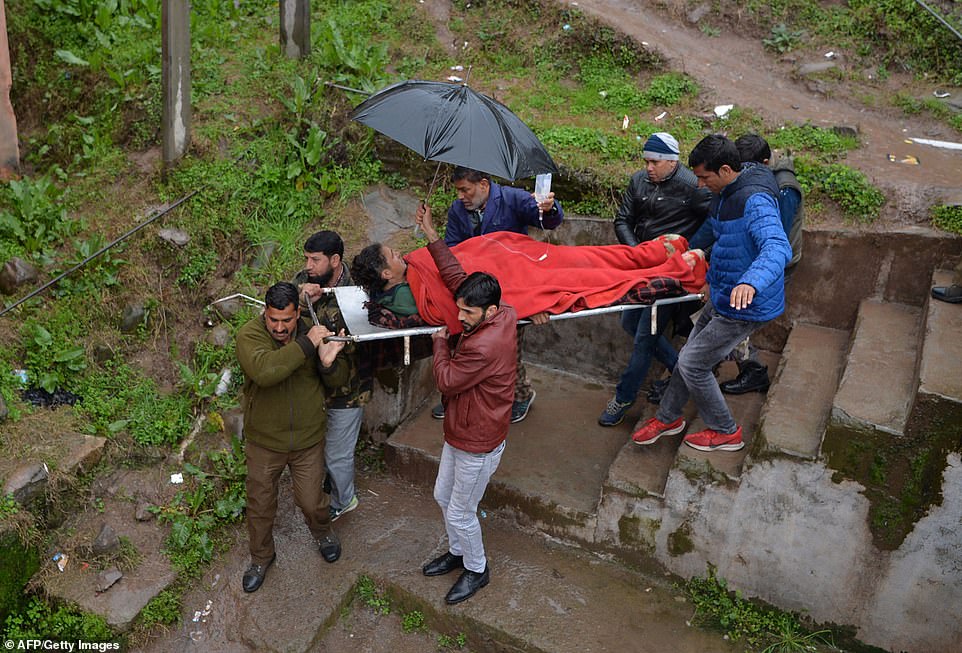 Three died after a shell fired by Pakistani soldiers hit their home in Poonch region near the so-called Line of Control that divides the Himalayan territory between the two nuclear-armed rivals. A fourth, pictured, was taken to hospital 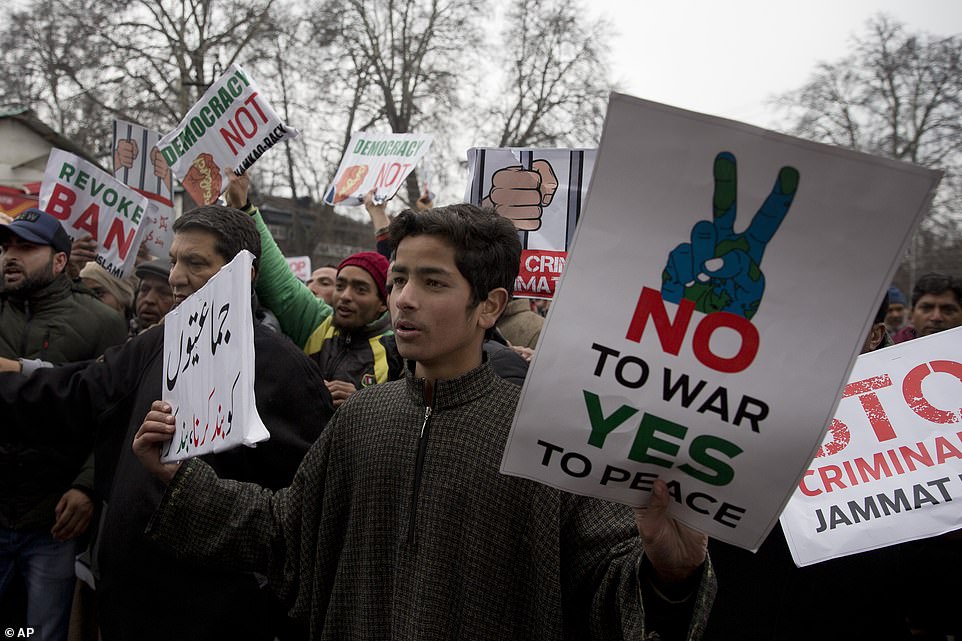 Tensions have been running high since Indian aircraft crossed into Pakistan on Tuesday, carrying out what India called a pre-emptive strike against militants blamed for a February 14 suicide bombing. Pictured: protesters in Kashmir 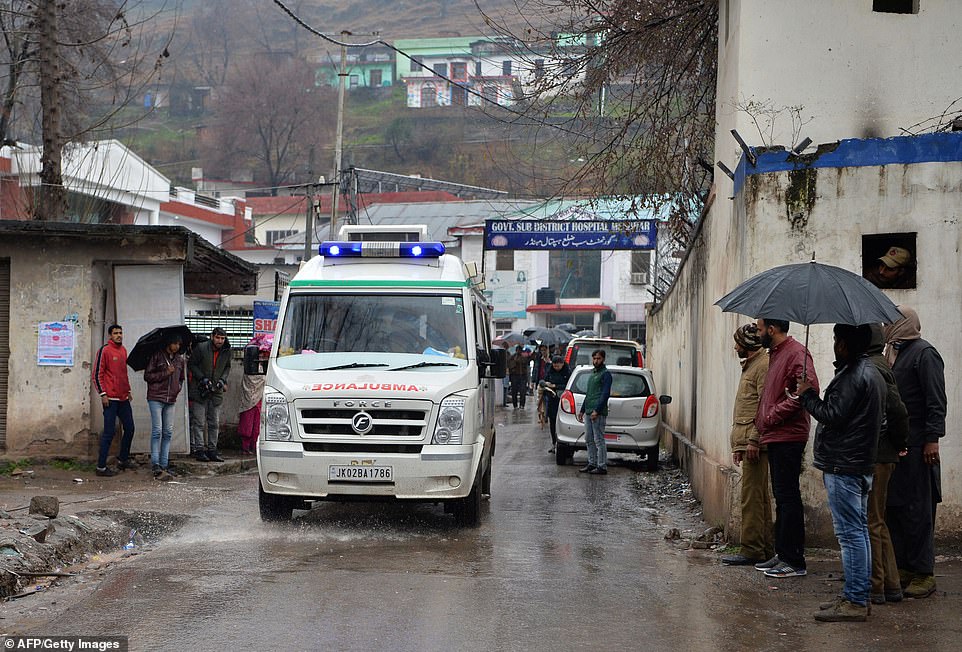 Pictured: an ambulance takes an injured man to hospital after fighting resumed overnight into dawn in the disputed region of Kashmir

Wing Commander Abhinandan Varthaman revealed that he ate sensitive documents so they would not fall into his captors’ hands ahead of his release at the Wagah border yesterday.

Pakistan’s PM called the handover of the pilot a ‘peace gesture’, intended to defuse military tensions between the nuclear-armed nations.

Thousands of flag-waving supporters gathered at the border to welcome him home but crowds had dwindled by nightfall as the handover dragged on for hours without explanation. 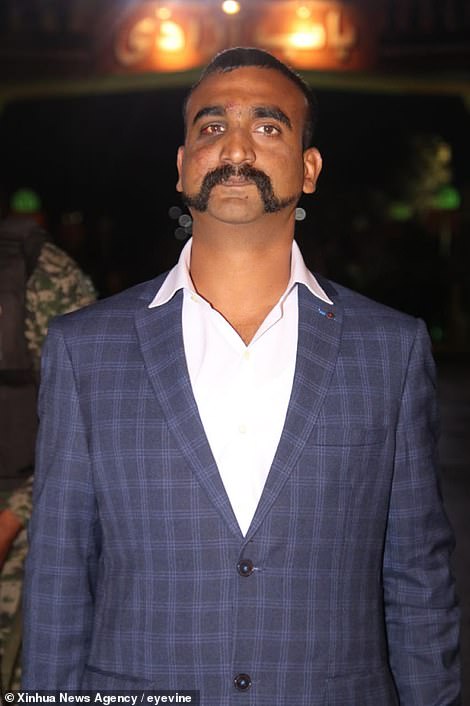 The Hero: Wing Commander Abhinandan Varthaman has been hailed for his heroic stoicism after he was surrounded by furious Pakistani locals on Wednesday

Wing Commander Varthaman has been praised for his stoic professionalism after he fired warning shots as locals went after him on the ground in Kashmir on Wednesday.

He parachuted from his burning fuselage and then fled the locals to eat secret documents and destroy military evidence, the Washington Post has revealed.

Shortly before 9.30pm Indian time (4pm GMT) yesterday he finally appeared at the border checkpoint escorted by military officers and crossed the frontier into India.

As Islamabad released him they also published another video of the pilot, in which he apparently praised his ‘very professional’ Pakistani military captors, who had rescued him from a mob.

Despite the move to de-escalate the crisis both sides fired barrages of shells across the frontier today, with reports of attacks on Indian police officers in the province.

The pilot finally appeared after darkness had fallen on Friday evening, crossing the border accompanied by a Red Cross representative, before he was driven away again in a convoy.

In a brief statement after his release the Indian Air Force, who greeted him on his return, said they were ‘happy to have him back’.

‘Wing Commander Abhinandan he has just been returned to us as per the standard operating procedure of the IAF,’ they said.

‘He will now be taken for a detailed medical check up, particularly because he had to eject from an aeroplane which would have put his entire body under great stress.’ 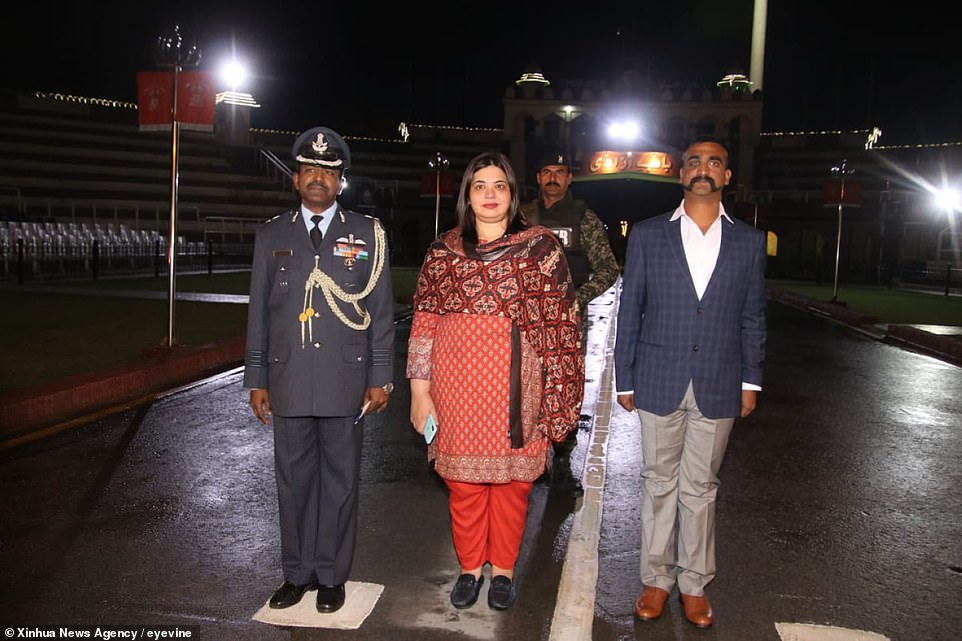 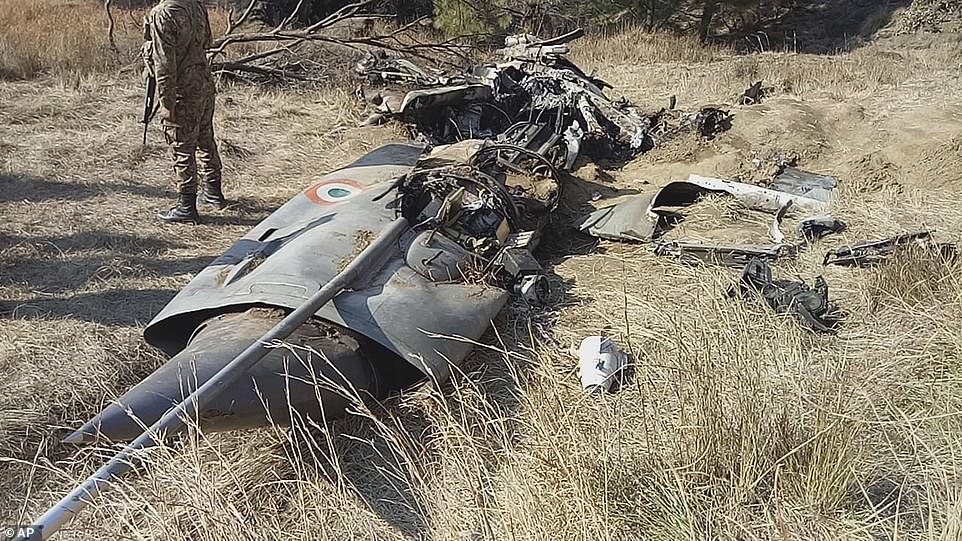 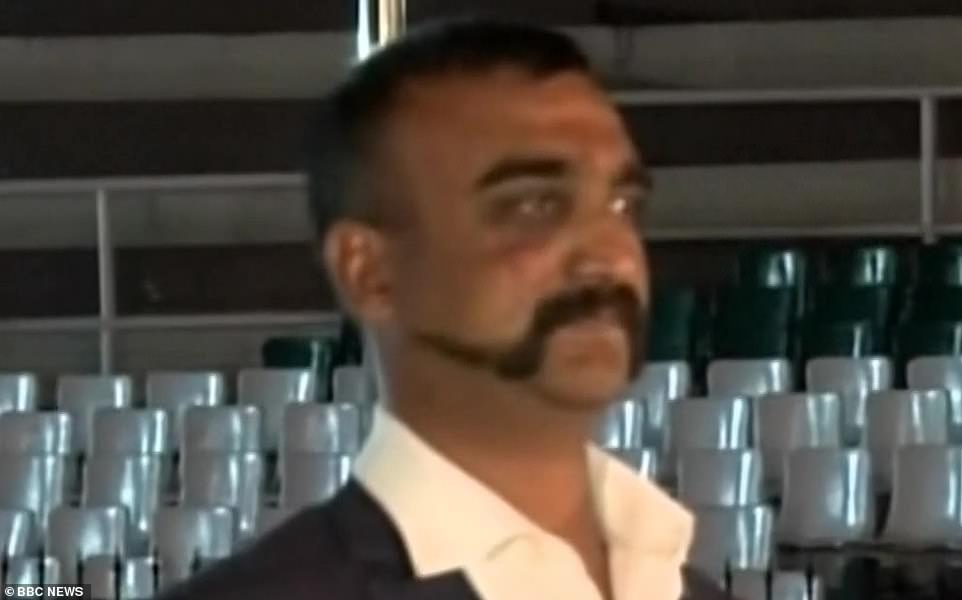 Homecoming: Abhinandan Varthaman, the Indian pilot captured in Pakistan, has crossed the border to return home 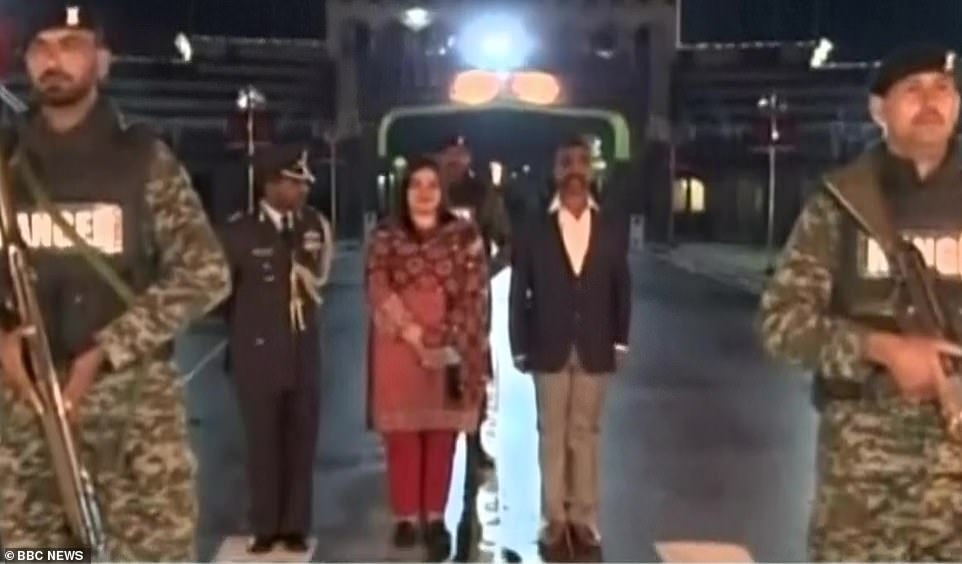 Return: The Indian pilot captured in Pakistan has returned home after crowds waited for hours to welcome him back. As he appeared at the crossing he was flanked by a Red Cross representative and military officers 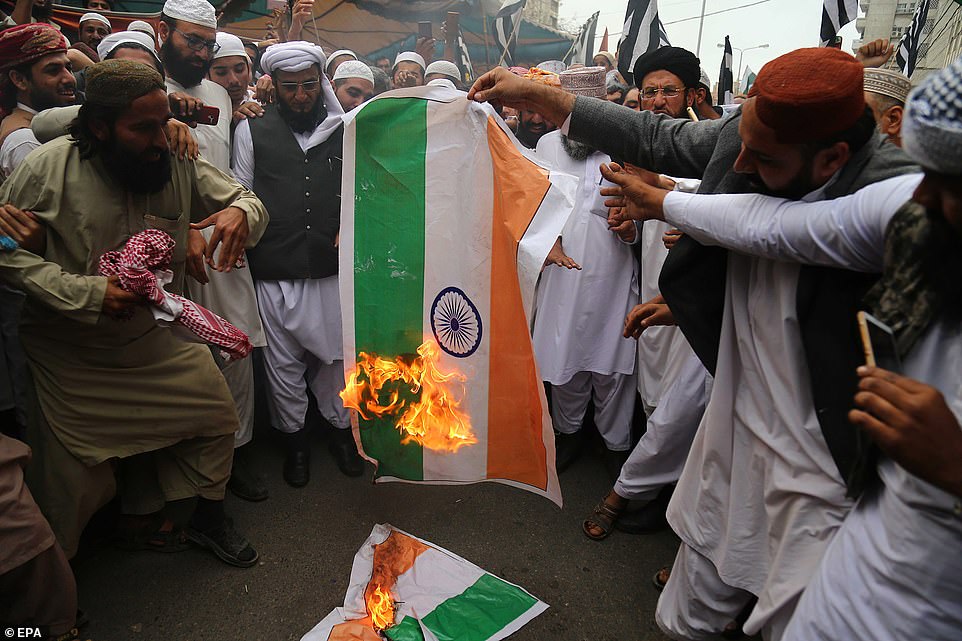 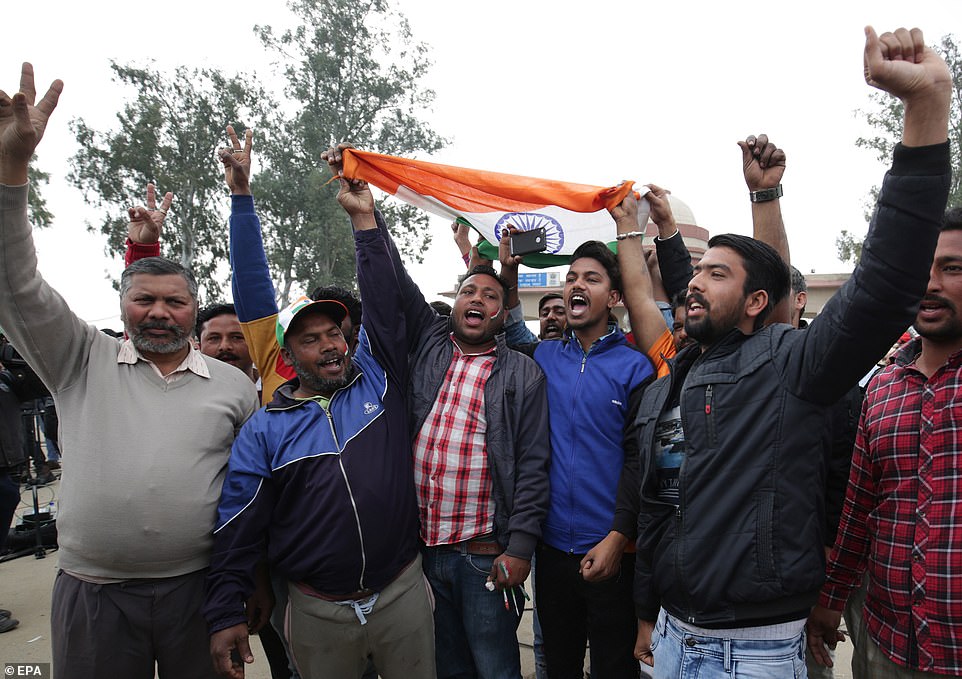 War Hero: Indians flocked to the streets in anticipation of the Wing Commander’s arrival on home soil, waving flags and chanting in celebration 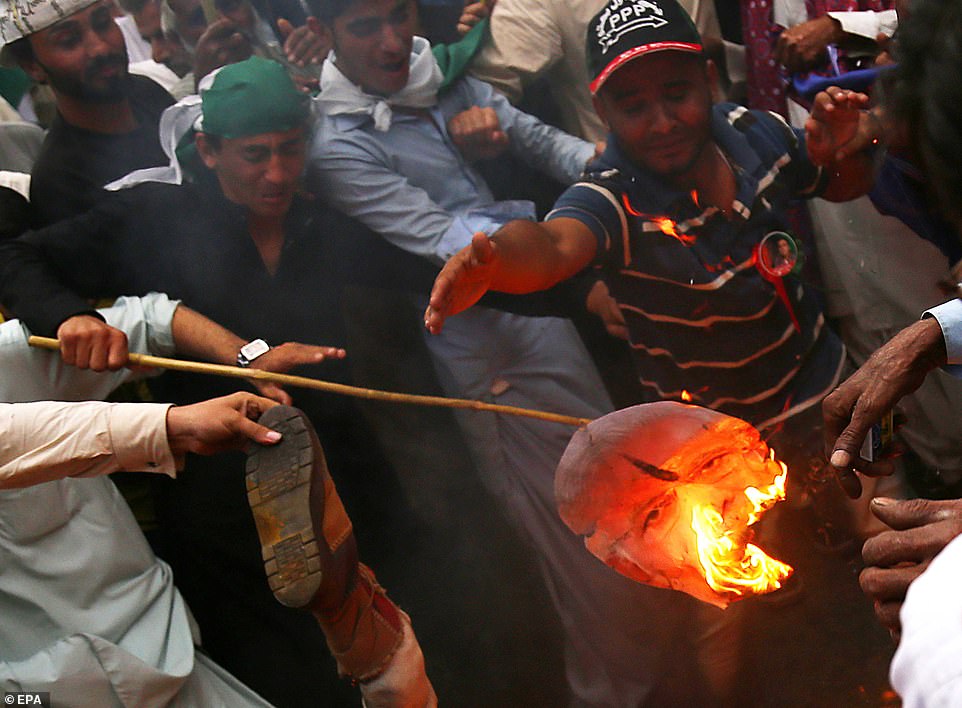 While Indians celebrated the return of their hero pilot, Pakistanis burned effigies of the Indian Prime Minister Narendra Modi 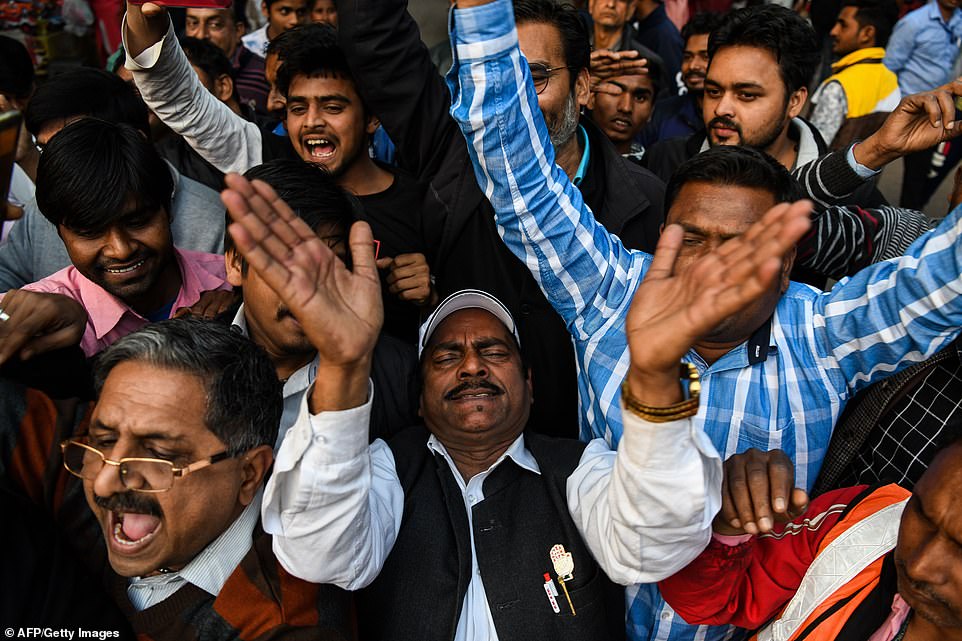 Men gathered on streets of New Delhi to dance and cheer the arrival of the pilot, who was said to have acted quickly to swallow sensitive documents 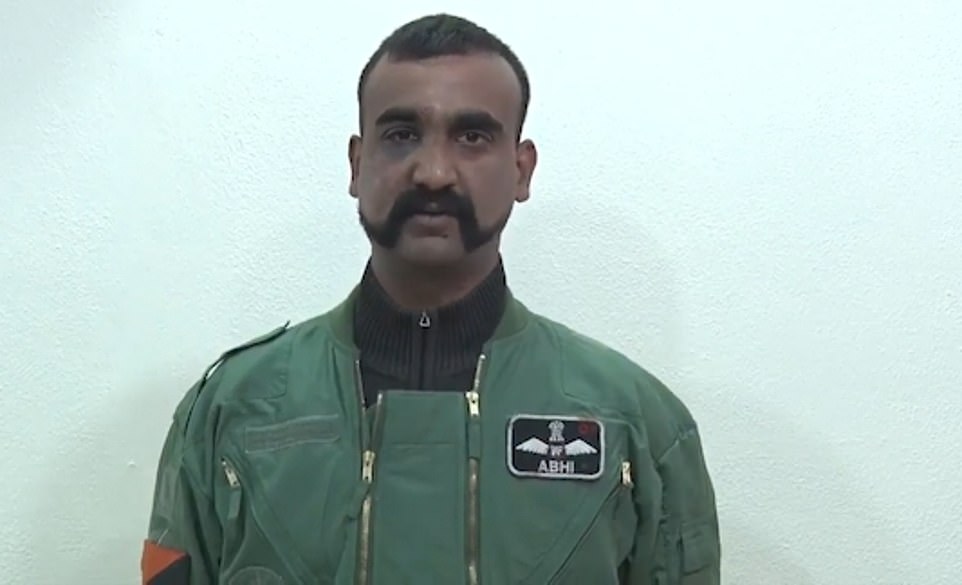 Propaganda: The pilot appeared in this video released by the Pakistani government shortly before his release in which he appeared to praise Pakistan’s military for their ‘professional’ handling of him

In the video published by the Pakistani government he appeared to praise its military for looking after him, although it was not clear who was with him when he was speaking.

Describing how he was shot down, he said: ‘When I opened my parachute and when I dropped down, I had a pistol and there were a lot of people and I only had one way to save myself. So I dropped my pistol.

‘So I tried to run and people ran after me. They had a lot of spirit and at that moment two young men from the Pakistani army came and they saved me from there.

‘There was a captain from the Pakistani army, he came and he saved me from these people and didn’t let anything else happen to me.

‘Then he took me to his unit where I received first aid and after that they took me to the hospital for further aid. The Pakistani army is a very professional service.’

Varthaman ejected from his burning jet and parachuted down to a crowd of ‘spirited’ locals who descended him on him with fury when he asked them where he was.

In a moment of cinematic drama, he stumbled backwards and fired his handgun into the sky before sprinting from the baying mob.

He dived into a nearby pond as they got close to him and was able to swallow some of the sensitive military documents on him, destroying others in the murky water around him.

He also appeared to suggest that the episode had been overblown, saying: ‘When there’s a small matter, it gets turned into a big deal and people get wound up over it.’ 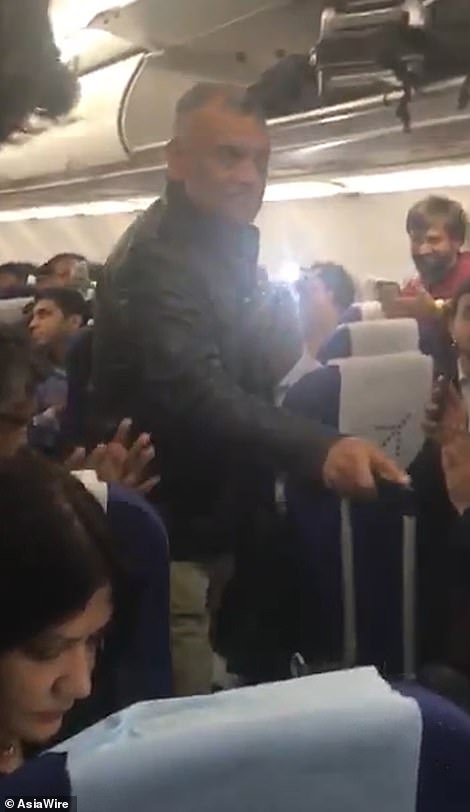 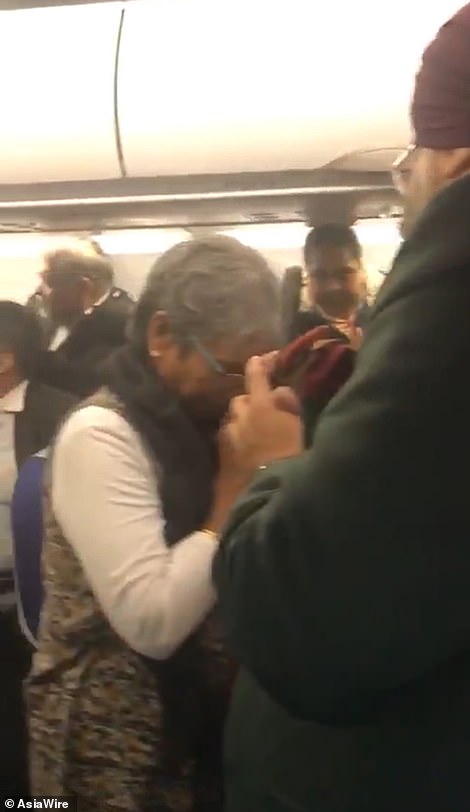 Appreciation: The captured Indian pilot’s father – Air Marshal Varthaman, himself a retired pilot – and mother Shobha Varthaman are warmly applauded by fellow passengers as they board a plane from Chennai to Delhi 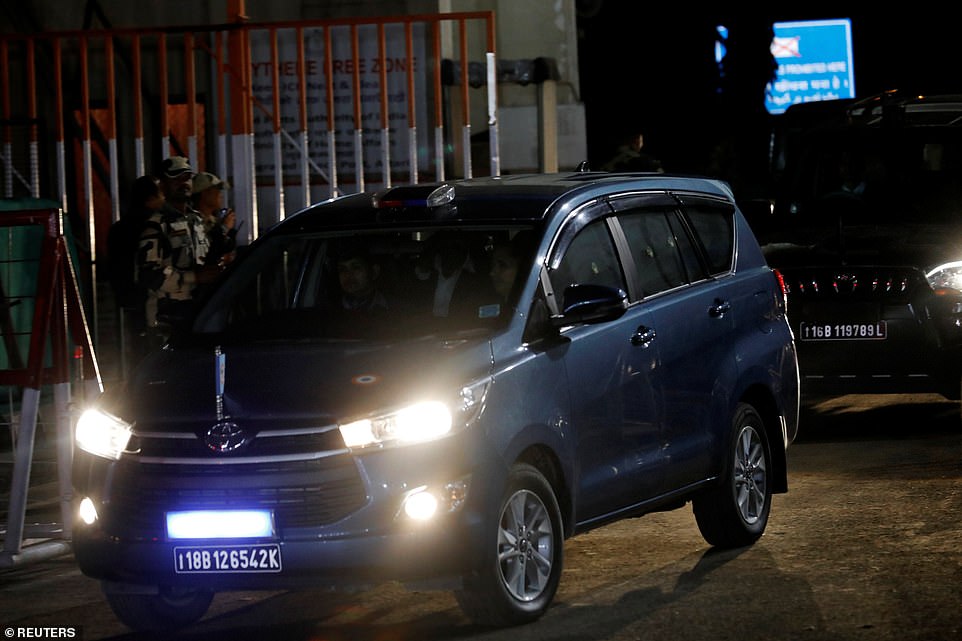 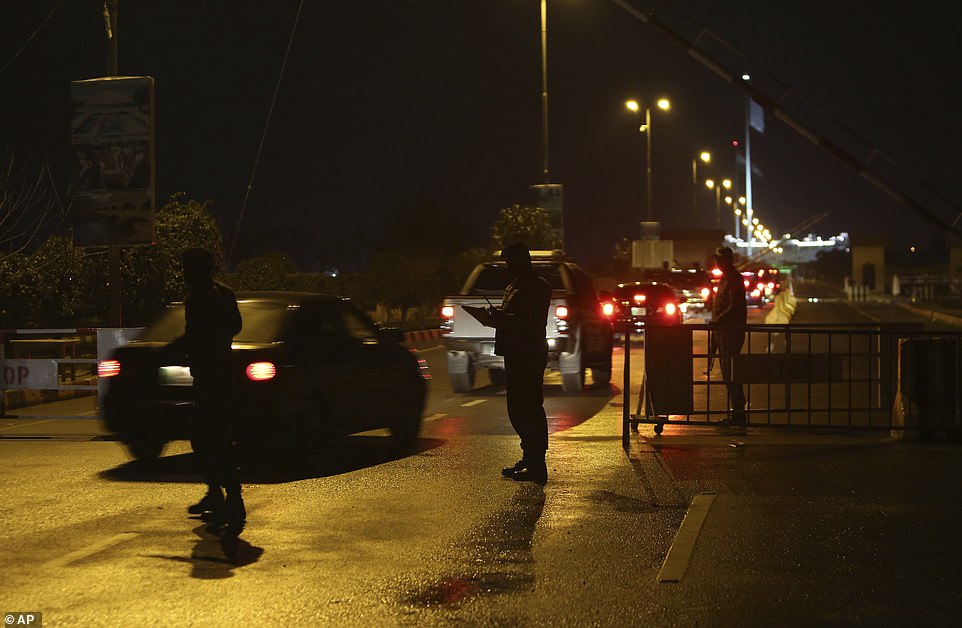 Convoy: The motorcade carrying the captured Indian pilot arrives at the broder post on Friday evening after a long wait