Five-year-old Olivia Gregory was becoming increasingly tired when she came home from school in early 2017.

She would arrive at her home in Wickford, Essex, relax on the sofa and was ‘out like a light’ at bed time.

When she went on holiday to Great Yarmouth with her mother Clare, 44, and father Tony in the summer, instead of running around like a normal she would say ‘Daddy, you’ll have to carry me’.

Then she started waking up with headaches and nausea, as well as constantly falling over. 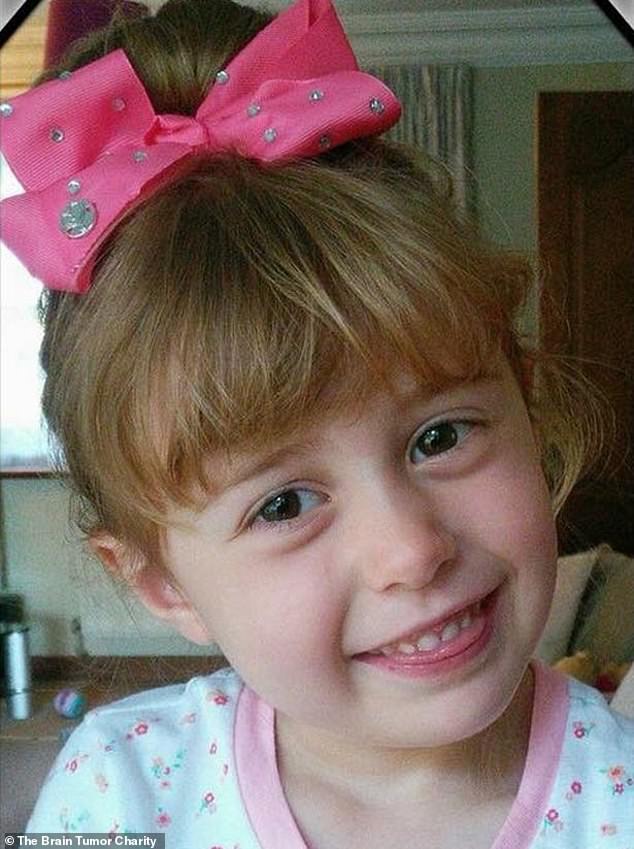 One year later Mrs Gregory would cradle her daughter’s lifeless body, just weeks before the child’s sixth birthday, as her husband drove them to donate Olivia’s brain and spine for medical research.

Their daughter had died after a drawn-out and painful battle with a Diffuse Intrinsic Pontine Giloma (DIPG) – a rare and aggressive form of brain tumour that affects just 40 children a year with a 9-12 month prognosis and has a zero per cent survival rate.

‘My heart was shattered Olivia was dead but I loved being able to cuddle her again,’ Mrs Gregory told The Mirror.

‘I hadn’t been able to do that for two months as she’d been so ill she didn’t want anyone touching her.’ 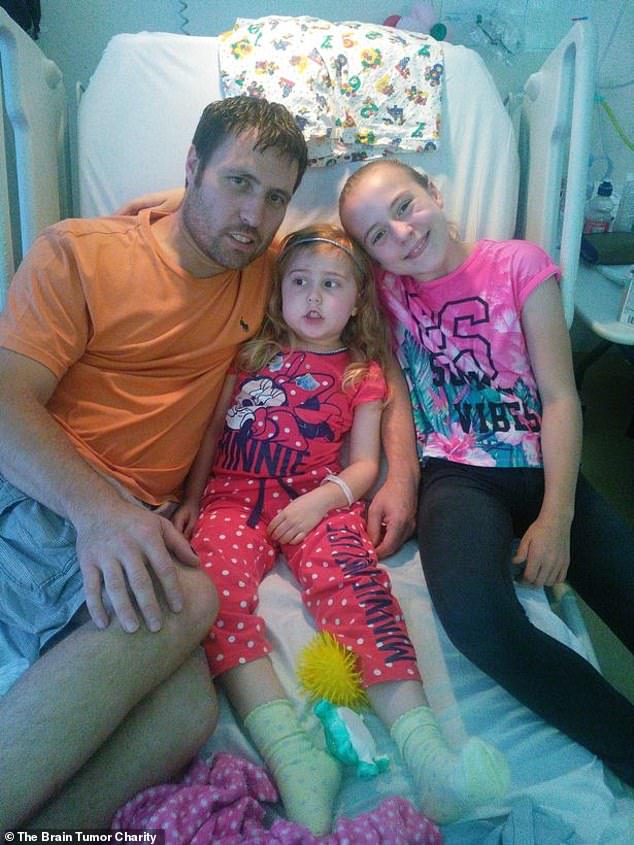 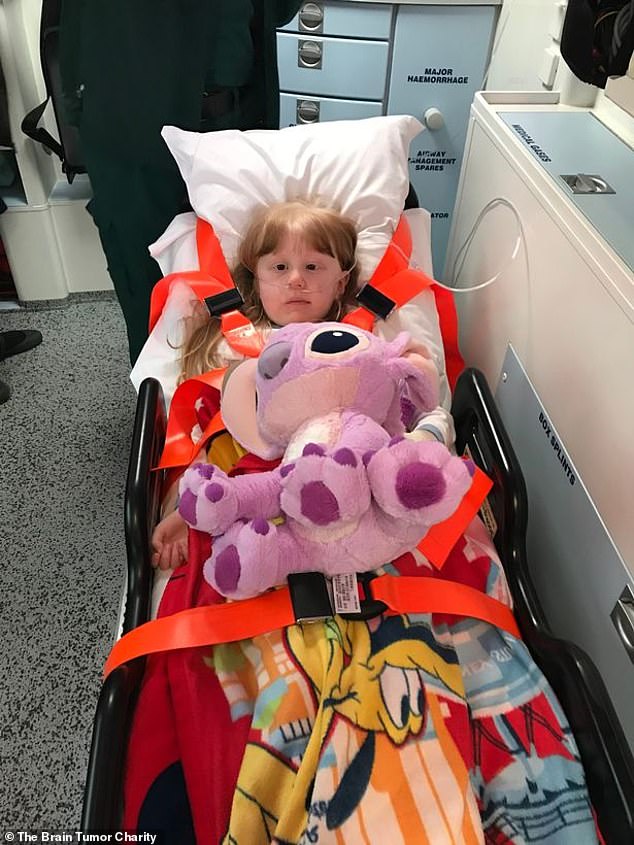 Mr and Mrs Gregory took Olivia to Great Ormond Street Hospital (GOSH) in London to donate her brain to the INSTINCT programme – which is co-funded by The Brain Tumour Charity.

Hours before on the day of her death, June 5, 2018, Olivia had grasped her parents’ hands while struggling to breathe as her mother rang her palliative care doctor for advice about pain relief for her daughter.

As the ‘awful noise’ of her breathing stopped, Olivia looked calm as her parents realised she was at peace. 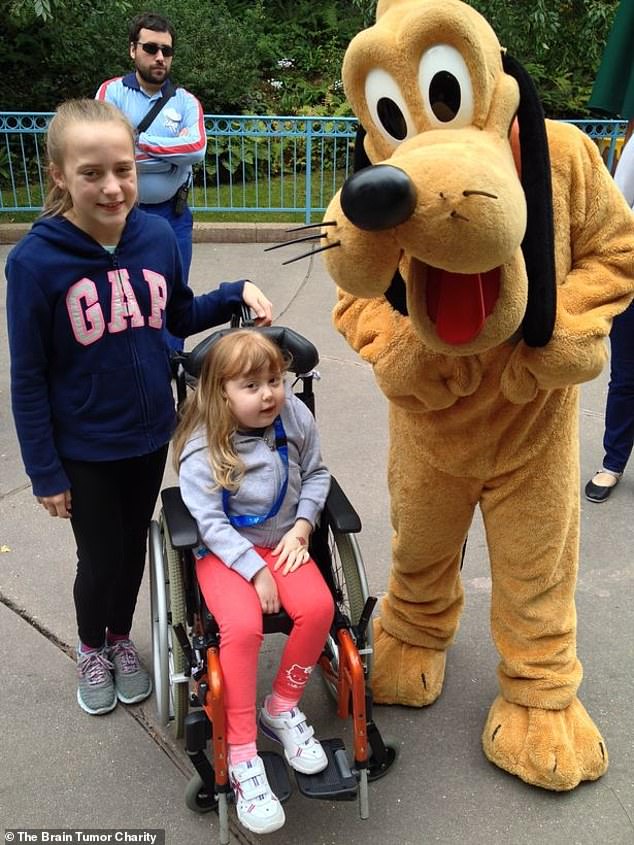 Claire (centre), Eva (left) and their parents went to EuroDisney to relish their time together 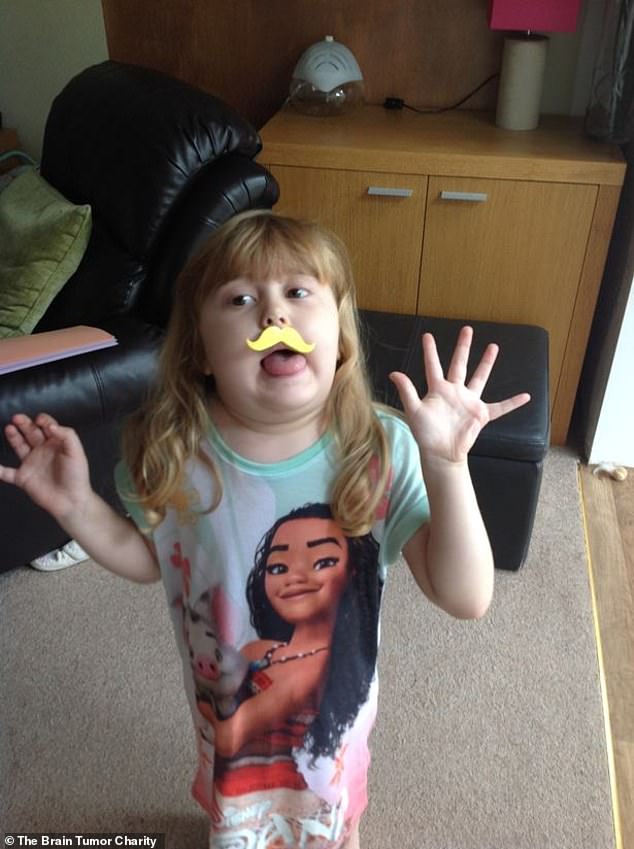 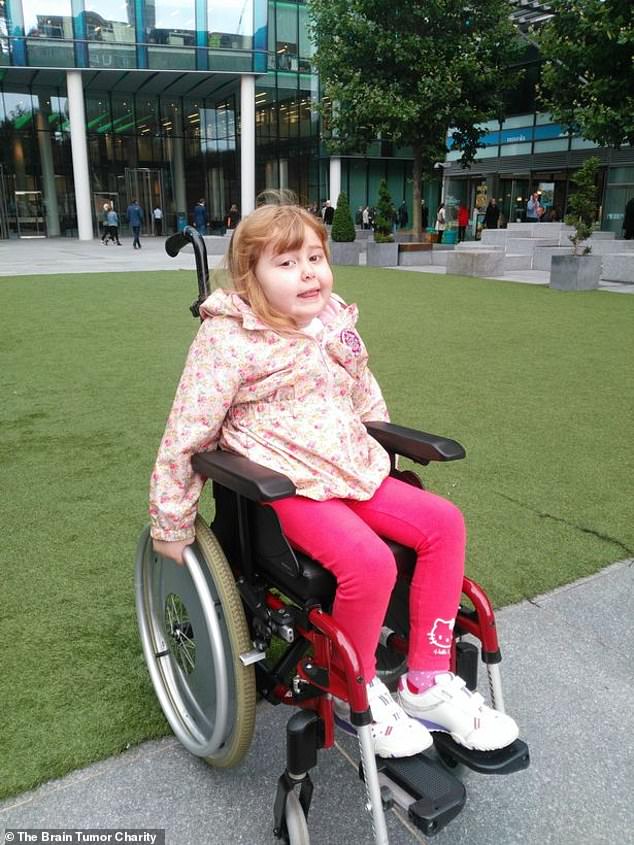 Before she was diagnosed on June 23 last year, Olivia’s mother took her to see a GP and was told two times that it was just a virus and adenoid problems, but the mother knew something was wrong.

On June 1 Olivia had woken up vomiting in the middle of the night, and when her mother rushed her to A&E she was told again Olivia had a virus and was sent home with Calpol and Diorlyte.

Following up on her intuition, Mrs Gregory’s research led her to The Brain Tumour Charity’s HeadSmart campaign on the internet, and as she ticked off her daughter’s symptoms one by one she felt sick. 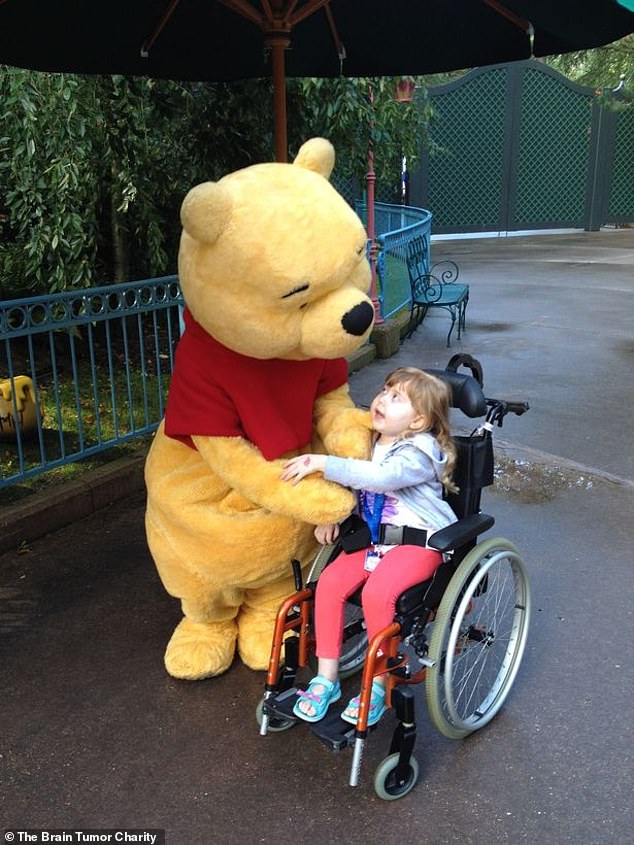 An MRI scan revealed a mass on Olivia’s brain, and Mrs Gregory knew her daughter would die

Mrs Gregory took her daughter to A&E and said she wouldn’t leave until they scanned her brain.

After an MRI scan the concerned parents were told their daughter had a mass on her brain.

The next day Olivia had a shunt implanted due to fluid on her brain and doctors discovered the inoperable DIPG during a biopsy.

When Mrs Gregory was told that Olivia had only 9-12 months to live she heard a gasp before realising it came from her.

She created a GoFundMe page on September 1 last year which raised £30,656 to spread awareness of DIPG and to raise money for experimental treatment for Olivia. 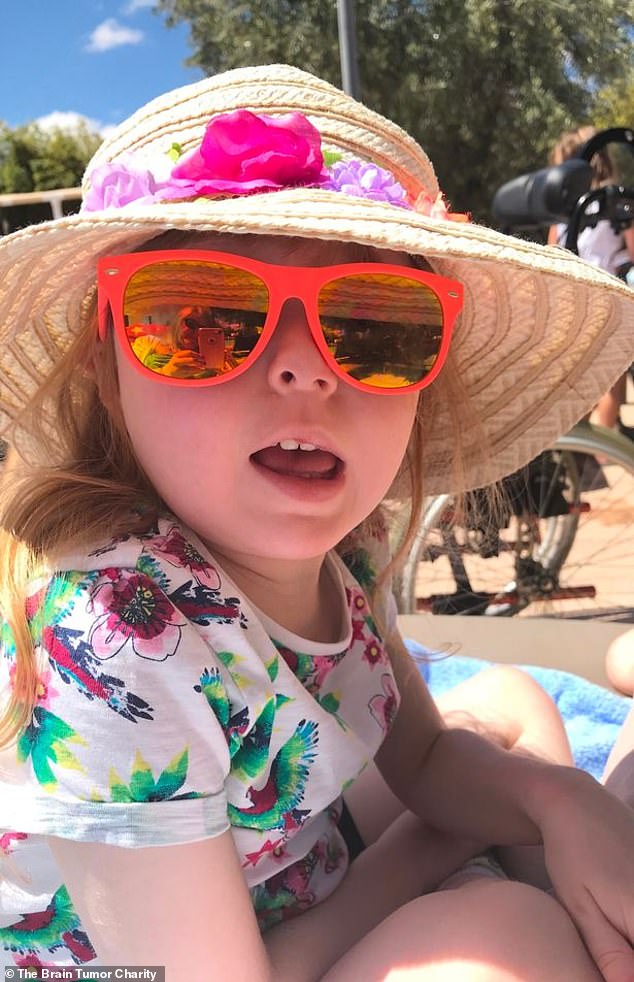 Olivia’s brain was donated to INSTINCT, co-funded by The Brain Tumour Charity

The page reads: ‘Olivia is a happy, fun-loving normal 5-year-old little girl who was diagnosed at Great Ormond Street Hospital (GOSH) on 23rd June 2017 with an inoperable (due to it’s location in her brain stem) aggressive cancerous brain tumour called a “DIPG” (Diffuse Intrinsic Pontine Glioma).

‘DIPG has a 0% survival rate – the average survival is 9 months from diagnosis. Only 10% of children survive 2 years following their diagnosis and less than 1% survives for 5 years.

‘This page has been set up to raise awareness of DIPG and to show support for Olivia and her family.’ 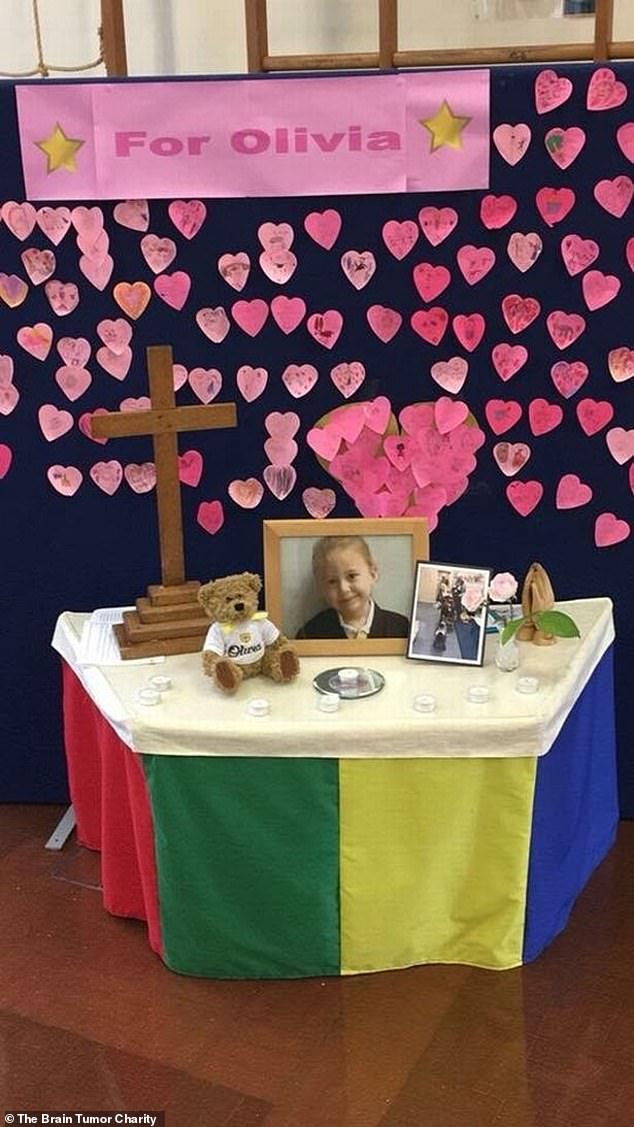 On the day of her death, June 5, 2018, Olivia had grasped her parents’ hands while struggling to breathe as her mother rang her palliative care doctor for advice about pain relief

The fundraising page states that there is ‘no cure’ for DIPG anywhere in the world, but ‘experimental’ treatments are available, but not on the NHS or through private medical insurance.

‘Currently Olivia struggles to walk unassisted so uses a wheelchair and walking frame,’ the page continues.

‘She has weakness down her right side and has facial palsy which affects her eyes and speech.

‘We are hoping that her symptoms remain stable so that she can have lots of fun with her family and return to school but we need your help!’ 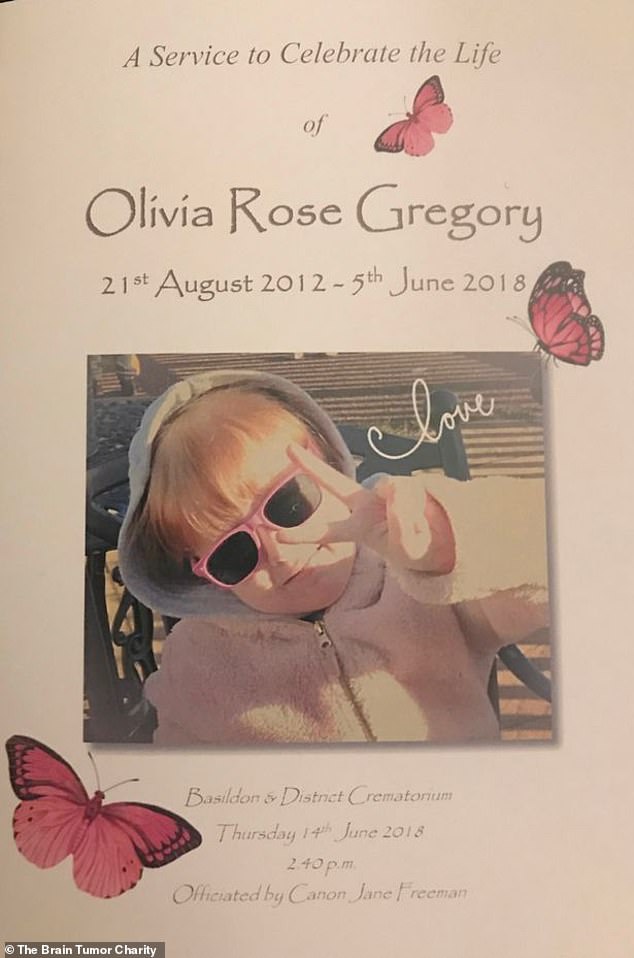 The family managed to squeeze in trips to EuroDisney, Dubai, Marrakech, Lapland and went on a simulated Tube drive before Olivia’s tragic death.

Now Mrs Gregory wants to spread awareness about brain donations to save other families from heartache.

The Brain Tumour Charity’s Nurses and Allied Professional Conference will today feature Mrs Gregory and another parent discussing their daughters’ brain donations – in the hopes of encouraging health professionals to let parents know that brain donation in an option.