Mother, 40, who smashed car into lamppost while so drunk she ‘only remembered waking up in a police cell’ avoids jail – despite second drink-driving conviction

Hilary Holcroft, who drank two bottles of Rose wine before ploughing her VW Golf into a lampost

A mother-of-one who was caught drink driving for a second time has avoided jail despite admitting she was so drunk she could not remember crashing her car.

Hilary Holcroft, 40, consumed two bottles of rosé wine before ploughing her VW Golf into a lampost after an argument with her boyfriend.

Police alerted by a passerby then spoke to Holcroft of Heaton Chapel, Stockport, but she replied: ‘I know I’m over the limit. This is going to ruin my career like it did last time’

She blew a breathalyser reading of 81 micrograms of alcohol in 100mililitres of breath. The alcohol limit for driving is 35mg making her more than twice the limit. It emerged she had previous drink with excess alcohol conviction from 2008.

At Manchester magistrates court Holcroft faced up to six months jail after she admitted drink driving in May, but escaped with a £350 fine and a 22 month road ban after she claimed she recalled nothing of the incident.

‘I have been off work on the sick because I have been suffering with depression and stress. I don’t remember anything at all. This has devastated me.

‘It is not something I will ever do again, I haven’t drank anything since. My partner was going to give evidence as he remembers what happened – but we’re not together anymore.

‘I am planning to go back to work next week. It’s been hanging over my head for two months and I just want to get it sorted.’

But after the case a spokesman for road safety campaign group Brake said: ‘Drink driving is selfish, dangerous and puts lives at risk. 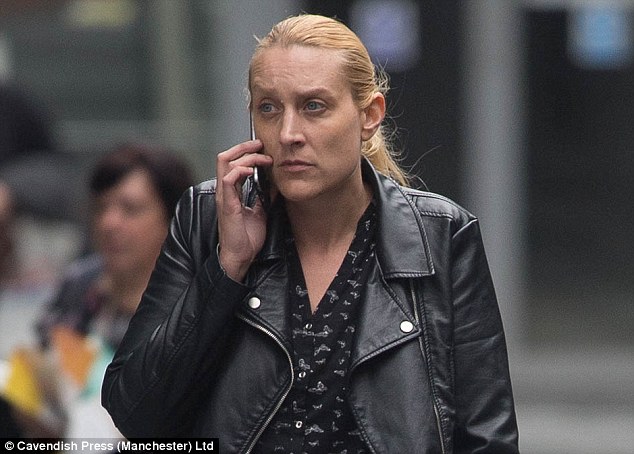 Holcroft, pictured leaving Manchester Magistrates Court, said she couldn’t remember anything fro the incident, only that she woke up in a police cell

‘The defendant should count herself extremely lucky that she has avoided a jail sentence – it is a miracle that no one was killed or seriously injured by her actions.

‘Repeat offenders are the most dangerous on our roads and must be dealt with severely so that they no long pose a threat to other road users. We urgently need the Government to amend our drink-driving laws to a zero-tolerance limit to stamp out the menace of drink driving.’

The incident occurred at 1.05am on May 13 this year after Holcroft had been drinking at her partner’s home in Sale, Greater Manchester.

Prosecuting, John Richards said: ‘The defendant was seen driving from Sale towards Old Trafford but on approach to a roundabout, she failed to turn left and drove onto the wrong side of the road. 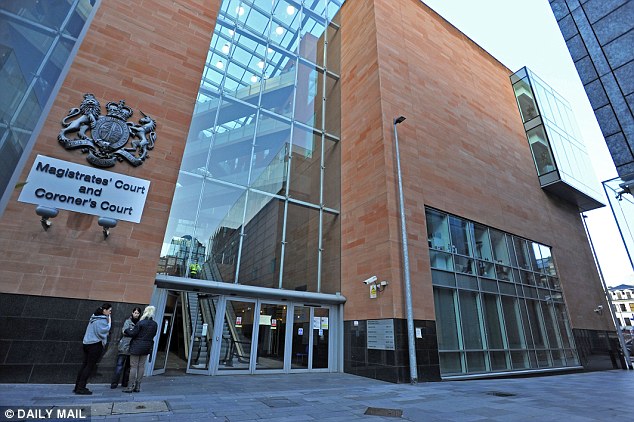 ‘She then collided with a lamppost before coming to a stop. She exited the vehicle and was assisted by members of the public.

‘999 is called and when the officers arrive, she says to the officer ‘I know I’m over the limit’.

‘There is a recording of the 999 call where a member of the public is explaining the defendants behaviour. She was arrested for drink driving.

‘She was taken to Ashton police station where she tells them in her interview that she has two bottles of wine and said: ‘I know I’m over the limit. This is going to ruin my career like it did last time’.

‘Another sample of breath was taken and an official reading of 81mg in 100ml of breath.

‘She said she had gone to her partners house, she had two bottles of rosè wine, an argument broke out and she left his house and she was quite upset.. She said she had got into the car with the intent of driving 20 minutes home.

‘The wine was 12% proof. Her intention was to go back home to Stockport. She said she couldn’t remember driving back or the crash.

‘She accepted she could have injured herself or others. The lady did suggest she did have a previous conviction, which she does from 10 Jan 2008, a conviction for driving with excess alcohol.

‘She received a 20 month disqualification and was offered a drink driver’s rehabilitation awareness course. She did apply for special reasons, but the witness did not attend and no evidence was offered, so the appeal had been dropped.’

Holcroft – whose occupation was not disclosed – was also ordered to pay £235 court costs and offered a drink driver rehabilitation course.

The case comes after recent figures said more than 32,000 motorists in the UK had been caught drink-driving at least twice since 2010.