‘I am forever crying thinking about the traumatic night’: Mother, 24, who was jailed for drink-drive smash that killed her daughter, six, and fiancé tells of her remorse

Carly Tomlinson was nearly twice the legal limit when she crashed in Belper last April, killing her daughter and fiancé. She was jailed today at Nottingham Crown Court (pictured)

A mother-of-two who killed her fiancé and six-year-old daughter when she crashed her car while speeding and almost twice the drink-drive limit has claimed she is ‘forever crying’ about the fateful night.

Police support worker Carly Tomlinson, 24, was jailed for two years after drinking two pints of lager and three vodkas and losing control of her Fiat Panda on April 30 last year.

A court heard the vehicle smashed into a metal railing, a telegraph pole and ploughed head-on into a stone wall on Kilbourne Road, in Belper, Derbys.

Her 28-year-old partner James Watson – who she had been due to wed the following month – was killed instantly in the horror crash.

Their daughter Ruby Watson, who was not properly strapped into her booster seat, also perished at the scene after suffering catastrophic head injuries.

Tomlinson told the Mirror: ‘I am deeply saddened by what happened that night and if I could swap places with James and Ruby, I would.

‘I am forever crying thinking about the traumatic night. I can’t explain how remorseful I am about that night.’

She suffered life-changing injuries in the collision – including 12 broken ribs, a lacerated spleen, a fractured pelvis and fractures of both knees and spent a month in a coma.

She pleaded guilty to a charge of causing death by driving without due care and attention while unfit through drink at Derby Crown Court on June 22.

Today, Tomlinson, of Belper, was jailed for two years at Nottingham Crown Court and disqualified from driving for four years.

The court heard the couple and Ruby had been at Marehay Miners’ Welfare Club in Ripley, Derbys., from between 8pm until 1am that night. 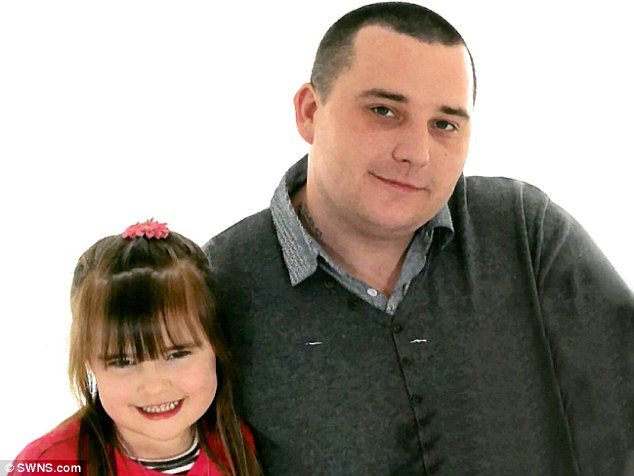 James Watson, 28, who Tomlinson had been due to wed the following month, was killed instantly in the horror crash. Their daughter Ruby Watson, who was not properly strapped into her booster seat, also perished at the scene after suffering catastrophic head injuries

As they drove to their home two miles away Tomlinson clipped a kerb and mounted the pavement travelling at 43mph which was ‘well in excess of the 30mph limit’.

It then collided with railings before ploughing head-first into a telegraph pole and into a stone wall.

James died from multiple internal injuries and Ruby suffered fatal head wounds. Both were declared dead at the scene 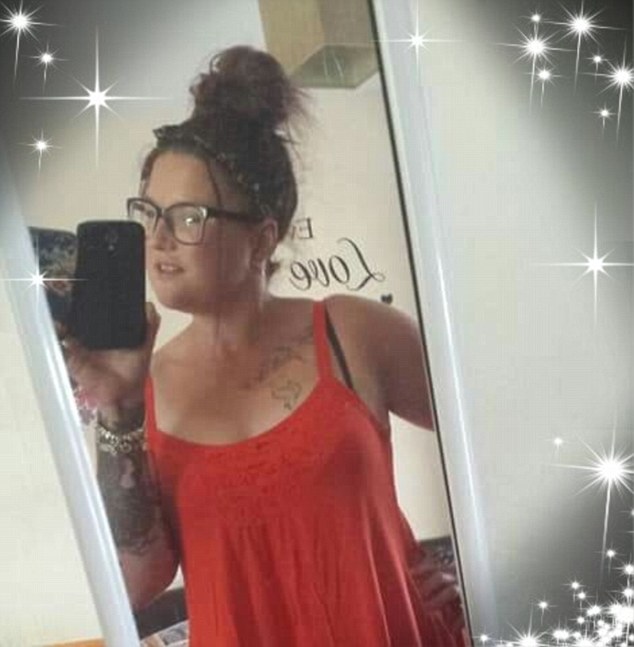 Tomlinson said: ‘I am deeply saddened by what happened that night and if I could swap places with James and Ruby, I would.

A passerby got off a bus, which has been forced to stop, and tried to help free Tomlinson from the car

The court was told how blood samples taken almost four hours later showed Tomlinson, who also worked as a carer, was just over the drink-drive limit.

But expert analysis concluded Tomlinson would have been ‘just below twice the legal limit’ when the crash took place.

Sentencing, Judge Gregory Dickinson said: ‘This case is both serious and tragic. The victims where your partner of nine years, James, and your daughter Ruby aged six.

‘It had been a happy, normal, uneventful evening until you came to drive the short distance to Belper. No one here knows why you drove.’

‘You should not have been driving. You must have known you had had too much to drink. You had a last drink just before you left.

‘As you entered the residential area of Belper, just after a fairly moderate right hand bend, you mounted the curb and then crossed onto the wrong side of the carriageway, collided with the metal railing and telegraph post before going head on into a stone wall.’ The court heard the couple and Ruby had been at Marehay Miners’ Welfare Club in Ripley, Derbys., from between 8pm until 1am that night. Pictured: Flowers at the scene of the crash 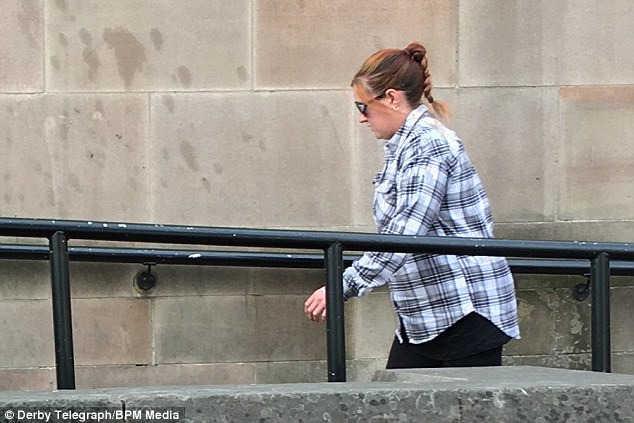 Tomlinson also suffered life-changing injuries in the collision – including 12 broken ribs, a lacerated spleen, a fractured pelvis and fractures of both knees – and spent a month in a coma

The judge continued: ‘There was no evidence of prolonged poor driving you simply failed to slow down when you entered the 30mph residential street in Belper.

‘The fact two people died is an aggravating feature. You killed your own child and your fiancé.

‘People you love, and who love you, will be haunted by this for the rest of their lives.. You could have killed anyone.

‘This will be with you for the rest of your life. You caused terrible loss but you will suffer that yourself.

‘There is no right sentence, nobody can put a value on a life.

‘This is such a serious case that only a custodial sentence can be justified. It would be wrong to suspend the sentence.’

In a letter addressed to Tomlinson, James’ mother Janine Hitchcock, 51, from Belper, said in a victim impact statement the defendant needed to ‘pay for her actions.’

She said: ‘I am sorry I am not in court but that is because I am so angry at what she has done to my family. We are not on her side like people think.

‘She needs to pay for all the heartbreak she has done. I am not supportive, I think she should pay for her actions.

‘James had a choice to get in that car but Ruby was not able to make that choice.

‘She was killed by the actions of her mother. It makes me very angry that she made the decision to drink-drive.

‘My family has been completely torn apart and I feel awful like I can’t breathe.

‘I feel so strongly that she should be punished.’ 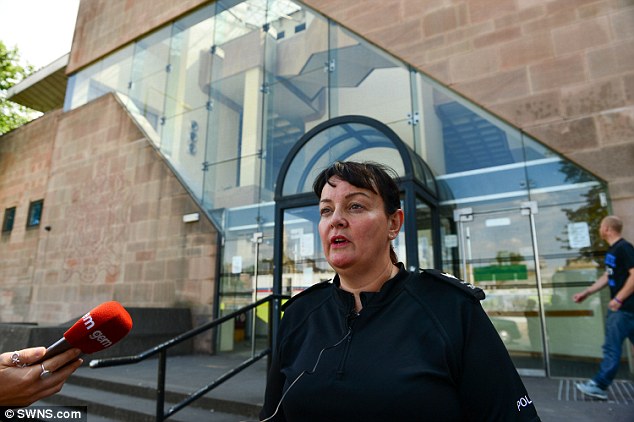 Detective sergeant Donna Tovell (pictured) from Derbyshire police said: Carly Tomlinson… has to live with those consequences for the actions which she took’

Raglan Ashton, defending, said: ‘May 24, 2018, was supposed to be the happiest day of Carly Tomlinson’s life because that was the day she was due to get married to James.

‘He was her best friend, her soul mate and the father to her two children.

‘The events of April 29 and 30 of 2017 were catastrophic and she has to understand she was the cause of that.

‘One of the points she is wrestling with internally is what caused her to drive on that occasion, and sadly she does not know the answers.

‘She’s at a loss to explain why and how she came to be involved in this terrible collision. She can’t answer, she does not know.

‘In her own words in the probation report, she says it is always on her mind.

‘She says ”I will never forgive myself and not a day goes by when I don’t think of James and Ruby”.

‘She said given the chance she would put herself in their place.’

Speaking outside court, James’ uncle Mark Robinson, 58, from Beeston, Notts., said: ‘I think it’s fair what they have done, but I know my sister won’t think that.

‘I don’t know what I’m going to face when I get home. I know she is going to go ballistic.

‘She is so upset. But Carly has gone to prison, Janine has got some justice.. It might not be what she really wants, but we can’t bring them back – we know that.’