Mother-of-four, 50, found face down on the ground at campsite died of alcohol poisoning after drinking a bottle of red wine with her pub lunch after a strenuous nine-mile country walk, inquest hears 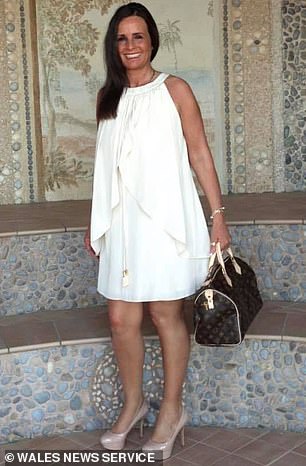 Maxine Bainton, 50, from Salford, died of alcohol intoxication during a camping holiday in Wales

A mother-of-four died of alcohol poisoning at a campsite after drinking a bottle of red wine after a strenuous nine-mile country walk, an inquest heard.

Maxine Bainton, 50, from Salford, was camping with her husband Stephen in Gwynedd, north-west Wales over the August bank holiday weekend.

The couple had a pub lunch with one of their sons and his girlfriend before returning to the campsite, and over the course of the evening had one bottle of wine each.

At around 9pm, Mr Bainton decided to go to bed, leaving his wife – who wanted to stay up – sitting on a camping chair.

He woke at around 1am and realised she was not with him, so got up and found her lying face down on the grass outside.

Mr Bainton thought at first that she was asleep so tried to wake her up, but was unable to.

Every time you drink alcohol, your liver has to filter it out of your blood.

Alcohol is absorbed quickly into your body (much quicker than food), but the body can only process around 1 unit of alcohol an hour.

If you drink a lot of alcohol over a short space of time, such as on a night out, your body will not have time to process it all.

Alcohol poisoning can also occur if a person drinks household products that contain alcohol. Children sometimes drink these by accident.

The amount of alcohol in your bloodstream, known as your blood alcohol concentration (BAC), will rise.

He told the inquest: ‘I called 999 and a couple from a neighbouring tent came to help.

‘I kept thinking she was going to wake up but she never did.’

Mrs Bainton may have had more to drink after her husband had gone to bed, the inquest heard.

The coroner was not able to establish the precise number of drinks she consumed, but said the fact the alcohol was consumed over a short space of time may have been an aggravating factor.

A post mortem showed that she had 311mg of alcohol in her system – more than four times the legal driving limit.

Coroner Katy Sutherland said: ‘Mrs Bainton had an extremely high level of ethanol in her system and essentially it poisoned her.

‘She had a high quantity of alcohol in a short space of time and it is likely that the amount of alcohol in her system would have been at a higher level at the point of her death in comparison to when the toxicology exam was carried out.’

Mr Bainton said: ‘We used to try and get away together around once a month and have been on many city breaks.

‘We decided we wanted to start going on holiday in this country which is when Maxine found this site.

‘We absolutely fell in love with the place and would try to come every weekend, weather and COVID permitting.

‘It wasn’t unusual for us to have a bottle of wine each and I often went to bed before Maxine.

‘She was an amazing woman and the life and soul of the party. She would light up any room she walked in to and was loving and caring.’ 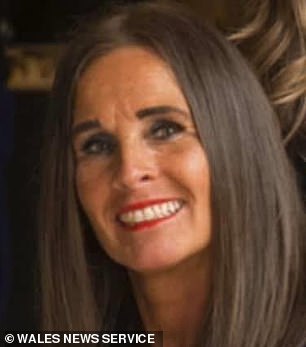 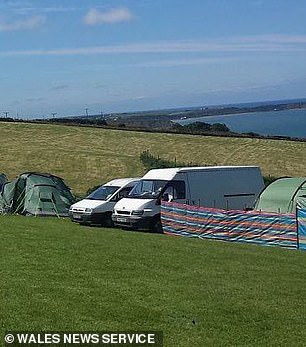 The campsite in Gwynedd, north-west Wales, where Mrs Bainton went on holiday with her husband and their four sons over the August bank holiday weekend.