Mother, 33, was run over and killed when she collapsed in the road after a drunk row with boyfriend she thought was cheating on her, inquest hears

A mother was run over and killed when she collapsed in the road after a drunk row with her boyfriend she thought was cheating on her, an inquest has heard.

Hannah Smith, 33, had been drinking wine, smoking cannabis ‘recreationally’ and wandering the streets at 2.34am when she keeled over at a set of traffic lights crossing Lees Road on September 20 last year.

Moments later she was crushed under the wheels of a Vauxhall Corsa after the driver, Daniel Ul-Haq, failed to spot her lying in the carriageway of the A669 in Oldham, Greater Manchester.

Hannah, from nearby Shaw, had been on a night out with her long-term partner Steve Newton and other friends.

She had an argument with boyfriend Steve in the taxi home as she believed he was cheating on her. 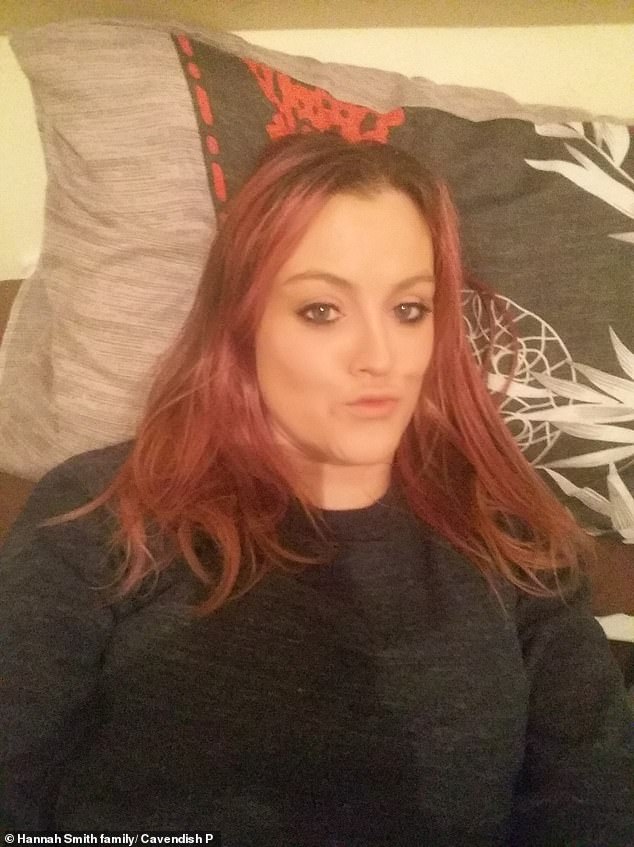 A mother was run over and killed when she collapsed in the road after a drunk row with her boyfriend she thought was cheating on her, an inquest has heard 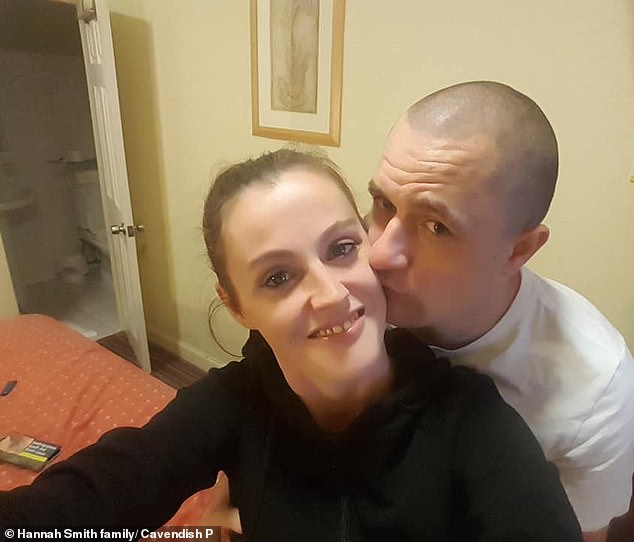 Hannah Smith, 33, had been drinking wine, smoking cannabis ‘recreationally’ and wandering the streets at 2.34am when she keeled over at a set of traffic lights crossing Lees Road on September 20 last year. Long-term partner Steve Newton pictured right

Mr Ul-Haq, 22, was not speeding, but carried on driving in the mistaken belief his vehicle had hit a kerb.

Hannah was described by friends as the ‘life and soul of the party’ and ‘having a heart of gold’.

She suffered fatal injuries in the impact and died two weeks later in hospital despite undergoing several rounds of surgery.

Mr Ul-Haq was questioned by police on suspicion of dangerous driving, but was released without charge and cleared of any wrongdoing.

Sgt Neil Pennington of Greater Manchester told an inquest in Rochdale: ‘She had consumed alcohol but we do not know how much.

‘Certain witnesses describe her as being drunk but not in a happy place. She believed her boyfriend was cheating on her and she had an argument with her boyfriend and it continued in the taxi they got home.

‘The taxi driver described how the female was sat in the rear of the taxi with the male in the front seat.

‘They had travelled a short distance when the boyfriend asked to get out of the car.

‘The argument then continued when he got out, but he got back into the car and got a short distance before walking off again.

‘The taxi driver described the female then asking him to take her to an address and she was upset and crying.

‘She knocked on the front door of an apartment block where her sister Lucy Smith lived but she had an argument with one of the staff members and was refused entry. This was around 2:30am. We have no evidence of where she went next. 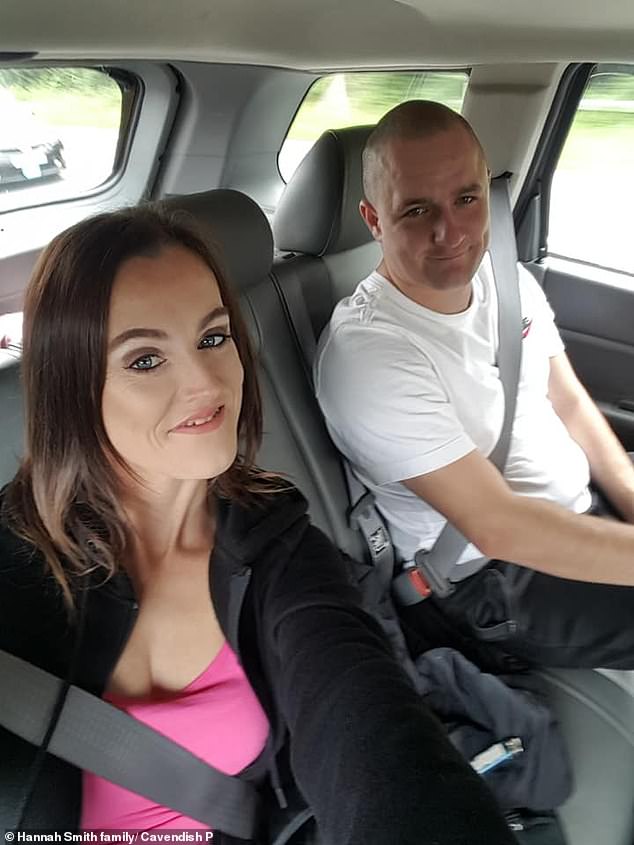 Hannah, from nearby Shaw, had been on a night out with her long-term partner Steve Newton (pictured right) and other friends

‘The next time she is seen is by a male who sees her in the middle of the road and he was concerned about her.

‘He went to speak to her and she told him that she had been assaulted by her boyfriend.

‘He describes that she was very angry and he rang the police. He then returned to the scene but she had already been run over.

‘CCTV footage shows her crossing the street before collapsing She lying in the road for approximately 50 seconds.

‘A delivery driver working at the time approached a set of traffic lights and saw a person lying in the road stretched across one lane.

‘He described how he was stationary in lane one and how the other driver in a small white car had moved into lane two to overtake him, travelled over Hannah and continued on its journey.

‘A passenger in a taxi described seeing a person lying in the road and asked the driver to stop so she could help, but this was post-collision.’ 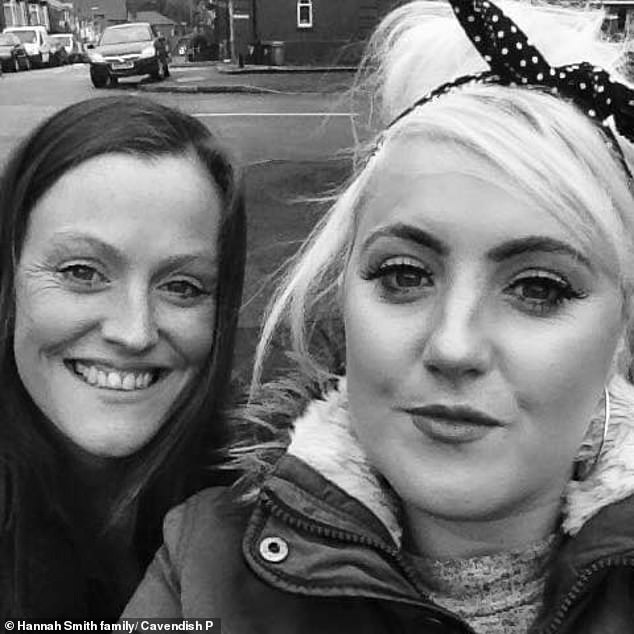 Mr Ul-Haq, 22, was not speeding, but carried on driving in the mistaken belief his vehicle had hit a kerb. Pictured with her sister Georgina

In the police interview, Mr Ul-Haq said he would have stopped if he had known his car had hit someone.

At the time of the collision, he was travelling at 27mph in a 30mph zone. Inquiries revealed Hannah was wearing dark clothing at the time.

Sgt Pennington added: ‘He was driving within the speed limit and when he pulled out to overtake, Hannah was approximately 35m away.

‘He would not have had a view of her at any point. The collision was inevitable.’

Her sister, Georgina, told the hearing: ‘She had looked happy and healthy. She did have a drink – but not every day.

‘She would just go out socialising and have a lot to drink and unfortunately she cannot handle it very well.

‘It has been upsetting for the whole family to come to terms with the loss of my sister. I find it hard to understand why she would have collapsed in the road.’

Recording a narrative conclusion, coroner Alexandra Preston said: ‘Hannah was a much loved woman, mum and sister. That night she drank a lot of alcohol and had an argument with her boyfriend. 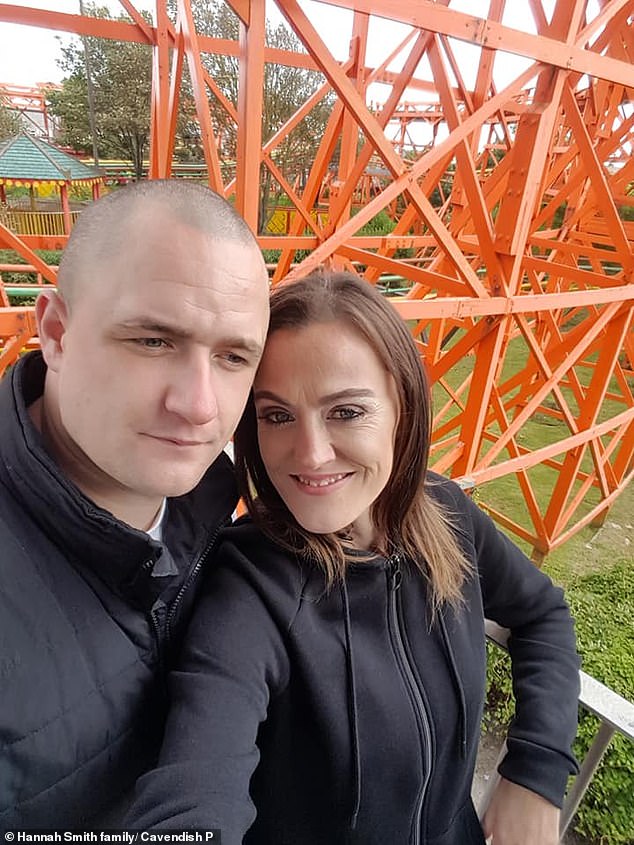 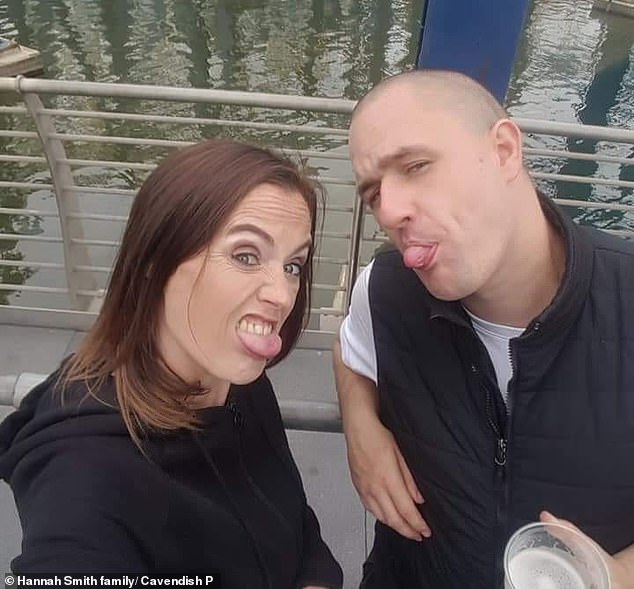 ‘They got a taxi to go to home but the argument continued in the taxi and her boyfriend got out whilst she continued to her sisters address.

‘She tried to get into the property but she was confrontational and was removed.

‘She was seen at 2.34am crossing Lees Road towards a pedestrian island but then collapsed in the road with alcohol potentially impacting her ability to stay upright.

‘She was lay across the second lane for about 50 seconds before a Vauxhall Corsa has then driven over her.

‘The driver was abiding by the speed limit but made no attempt to brake as he said he could not have seen the woman.

‘I cannot be sure why she collapsed but on the balance of probabilities, alcohol and recreational drugs did impact on her ability to stay upright.

‘She is seen to have an unsteady gate on the CCTV footage and there is evidence of consumption of cannabis.

‘She was wearing dark clothing and in a position where she would have been difficult to see.

‘The Vauxhall Corsa was driven appropriately and the collision was unavoidable because of the lack of visibility.

‘She died as a consequence of her collapse and her being in the road. Drugs and alcohol contributed to her death.

‘This was a very sad death. There are now very young children who will have to live without their mother.’

Neither Mr Newton nor Mr Ul-Haq gave evidence at the inquest.