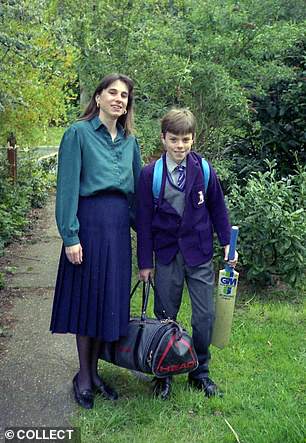 Yesterday he received the backing of Janie Hamilton, 66, a retired teacher who lost her son James following a battle with schizophrenia brought on by heavy cannabis use

Campaigners have backed a new anti-drugs stance at a university that is seeking to curb substance misuse among students.

The aim is to make illegal drugs socially unacceptable on campus, with undergraduates implicitly agreeing to shun them when they enrol.

Buckingham University vice-chancellor Sir Anthony Seldon says they are working towards a ‘psychological contract’ that will encourage physically and mentally healthy lifestyles.

He believes it is vital to send a message to young people that drug use is harmful and the university does not condone it.

Yesterday he received the backing of Janie Hamilton, 66, a retired teacher who lost her son James following a battle with schizophrenia brought on by heavy cannabis use.

‘I agree with every word he says,’ said Mrs Hamilton, who believes drug-taking is too normalised among youngsters and now works with police in schools.

‘I wish my son James had been able to attend a university which had adopted this approach.

‘Young people do not understand how harmful drugs can be on the developing brain. There are so many other stories out there like James’ but often these people don’t have a voice because their lives have fallen apart or they are locked in a mental health ward.

James died aged 36 from testicular cancer, with his inquest recording part of the cause was his cannabis-related psychosis, which had led him to refuse treatment. Mrs Hamilton added: ‘Some people may turn a blind eye to all of this because they think it is too big of a problem.

‘But we should try. It will be worth it if we can save others from suffering as my son did.’

Sir Anthony’s strong stance on drugs was shaped by the death of one of his students when he was head at Brighton College. Hester Stewart, 21, died in 2009 after taking the ‘party drug’ GBL.

His new initiative follows an outcry at Sheffield University when its student union gave advice on how to take various hard drugs safely. The National Drug Prevention Alliance yesterday condemned that approach and said Sir Anthony was ‘on the right lines’ because universities have a ‘duty of care’.

Buckingham’s campaign was also supported by drugs charity Mentor. Chief executive Boris Pomroy said: ‘An ambition of a “drug-free campus” is certainly laudable, particularly if it has been developed in partnership with the students.’

Writing in the Daily Mail on Monday, Sir Anthony said drug-taking at university should be as socially unacceptable as smoking in public. Buckingham is now working with students to introduce a culture in which drugs are ‘totally unwelcome on campus’.

Responding to Mrs Hamilton’s backing yesterday, Sir Anthony said: ‘It is extremely difficult for families of those whose lives have been ruined by drugs to speak out but I have been very moved by the response to this initiative from people who have lost a family member.’