The mother of a soldier who saw action in Iraq and Afghanistan has spoken of her grief after he became the eleventh from a single infantry battalion to take his own life.

Lance Corporal Andy Francis, 30, died in Scotland on May 23, becoming the latest veteran who served with or was attached to 2nd Battalion the Rifles to take their own life.

Mother Sharon Garton, from Mansfield, pleaded for more to be done to help veterans deal with mental health issues, telling the Mirror: ‘Please don’t let my son’s death be for nothing.’

‘I know Andy wouldn’t have wanted to put everyone through the pain and suffering we’re now going through.

‘But this is now a nightmare – the demons of Helmand have moved on to us through the loss of our wonderful handsome young man.’

She said tours of Afghanistan and Iraq had left her son traumatised and that he experienced ‘lots of ups and downs’. 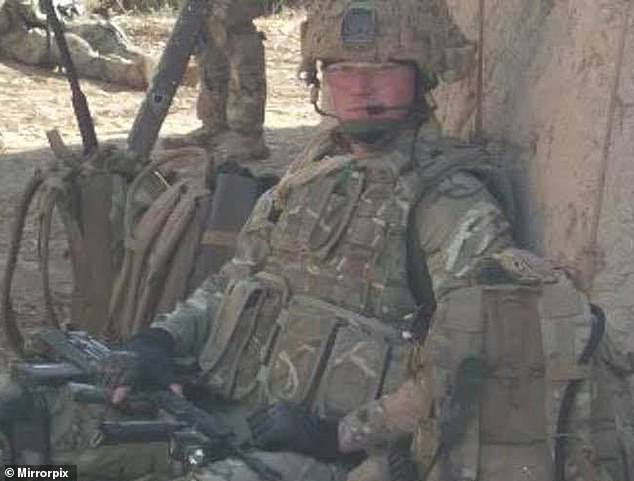 Lance Corporal Andy Francis, 30, died in Scotland on May 23, becoming the eleventh veteran who served with or was attached to 2nd Battalion the Rifles to take their own life 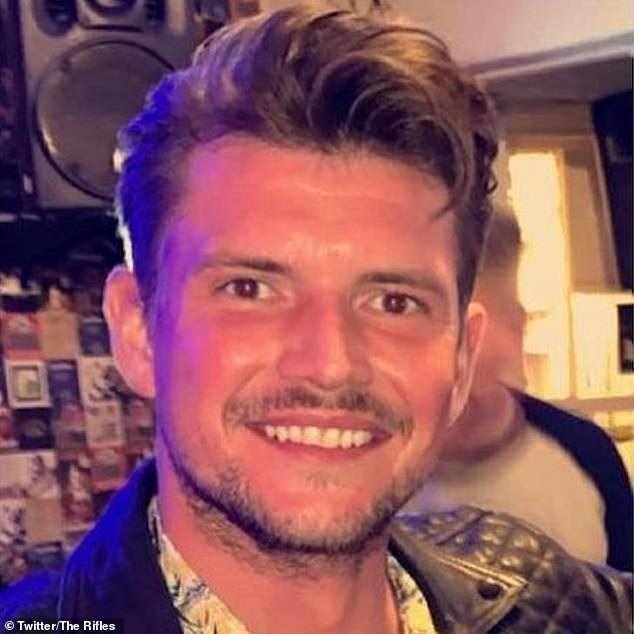 Days before his death ‘he was the happiest I’ve seen him for a long time – financially sound, good job, deeply in love, and looking forward to popping the question’ – before ‘the demons’ came back to haunt him.

Garton said the family were ‘heartbroken and struggling’ and pleaded for the MoD to ‘stop this.’

She added: ‘Andy’s beautiful four-year-old daughter Scarlett will grow up without her wonderful dad and we’ll have many difficult days explaining this to her…

‘The heartbreak and pain is excruciating. His girlfriend is broken, his sisters are struggling – and that, for us, is heartbreaking alone. I can’t take my babies’ pain away.’ 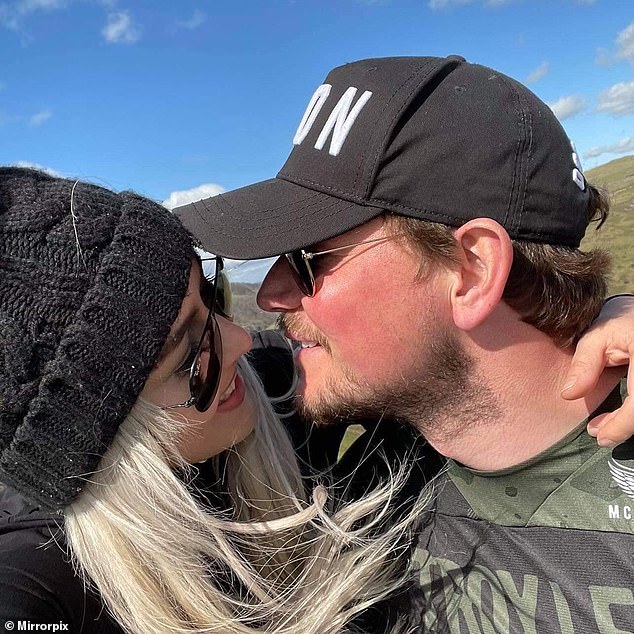 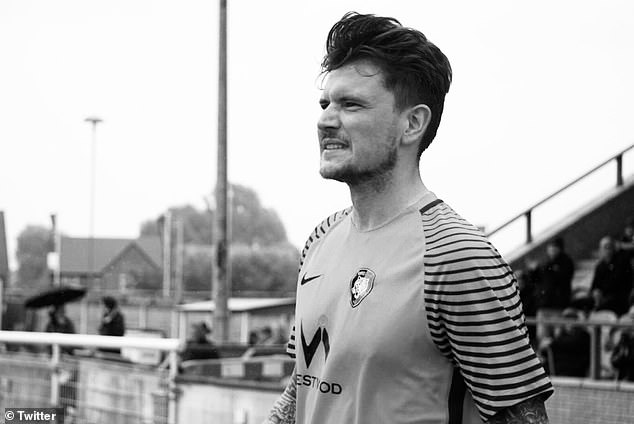 ‘Our thoughts and prayers are with his family and friends at this difficult time.’

Sherwood Colliery FC said: ‘Andy was a true gent both on and off the field who gave his all every game and set himself high standards.

‘Thank you Andy for your service to the club, you will be missed by all who know you and our thought and prayers are with your friends and family at this time.’

Francis was diagnosed with Post-Traumatic Stress Disorder after returning from tour in Afghanistan, according to former colleague Craig Monaghan.

‘He was so quiet, like a mouse, when we got back from Afghan and left [the Army] because he was struggling with the aftermath and couldn’t ­access treatment.’

The tight-knit battalion saw some of the most brutal fighting of the wars in Iraq and Afghanistan on tours in 2006 and 2009 respectively and many were later diagnosed with PTSD or other mental health issues. 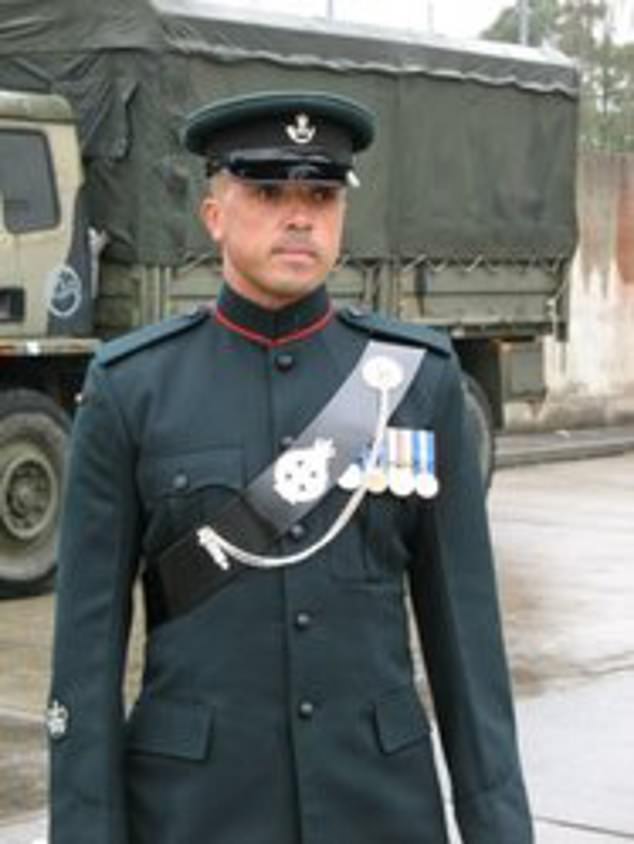 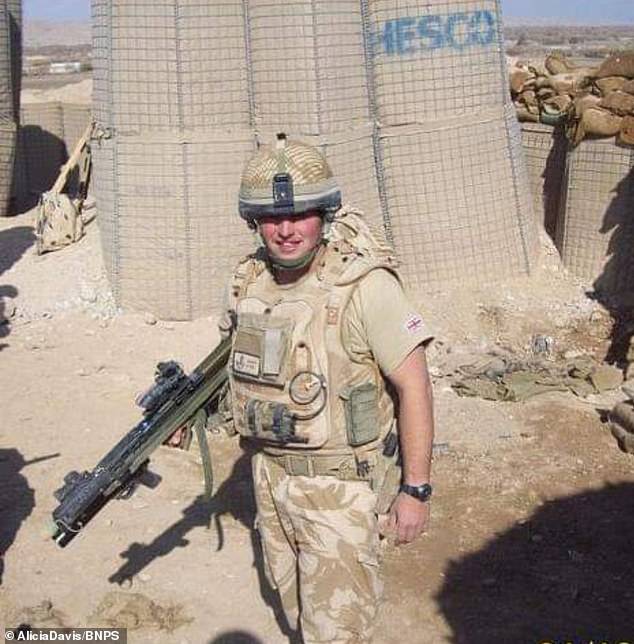 Jamie Davis, 30, took his own life after suffering from Post Traumatic Stress Disorder from fighting in Afghanistan in 2010

The death of Rifles Colour Serjeant Matt Pascoe was announced only days before Francis’s. It is not yet clear if Pascoe served in Afghanistan.

The 2 Rifles battalion was deployed to Sangin, in the southern province of Helmand, on an operation codenamed Herrick 10.

It was the site of some of the deadliest fighting of the war and Rifles soldiers stationed there bore the brunt of the highest frontline casualty rate suffered by British forces in a single day since the Falklands War.

In one horrifying example, a soldier was blown up by a remotely detonated IED and his comrades were sent to hunt down his body parts, which had been stolen by the Taliban.

The Rifles had the highest death toll – 55 – of any regiment that served in Afghanistan and were deployed in 2009, the conflict’s deadliest year for soldiers. 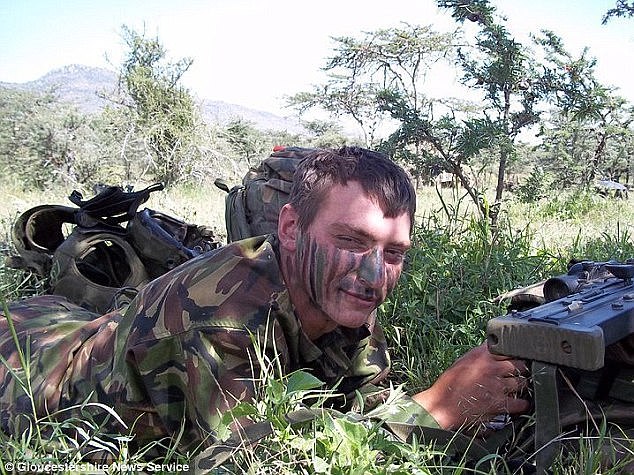 Rifleman Alan Arnold, 20, took his own life after seeing some of the deadliest fighting of the war in Afghanistan 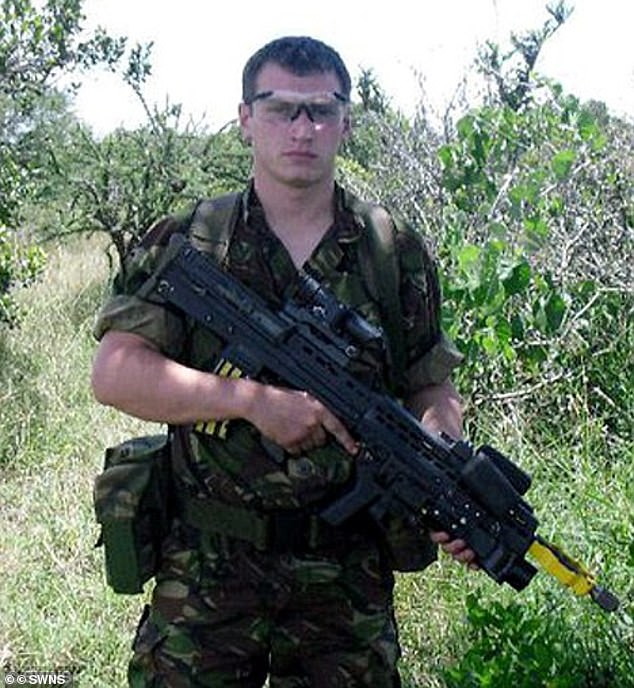 Announcing Francis and Pascoe’s deaths in a letter to serving Rifles personnel, General Patrick Saunders said: ‘The Regiment’s sympathies are especially extended to their families, friends, and those with which they served so brilliantly.

‘Tragically Matt and Andy are not the first Riflemen we have lost in this manner and despite all that the Army and Regiment have now been doing for some time I fear they will not be the last.’

He pointed to the services available to serving and former personnel, but admitted there were ‘gaps’ in the ‘system’.

‘So I make a personal plea to every Rifleman and their friends,’ he said. ‘We know that it is those closet to people in need who stand the best chance of  recognising when somebody needs help – battle partners as Riflemen were taught in training. A system cannot replace or replicate this.

‘We must swiftly look after each other, call for help as soon as a worry occurs, and boldly dismiss any sense of such care being viewed as an overreaction. It is a duty that we owe to each other and something that must become deeply embedded in our regimental culture.

‘Should you have the slightest concern about yourself or a comrade, I urge serving Riflemen to alert their chain of command and our veterans to contact the appropriate agencies and/or our Regimental Headquarters so that everyone can be helped or sign-posted to where that help can be found.’ 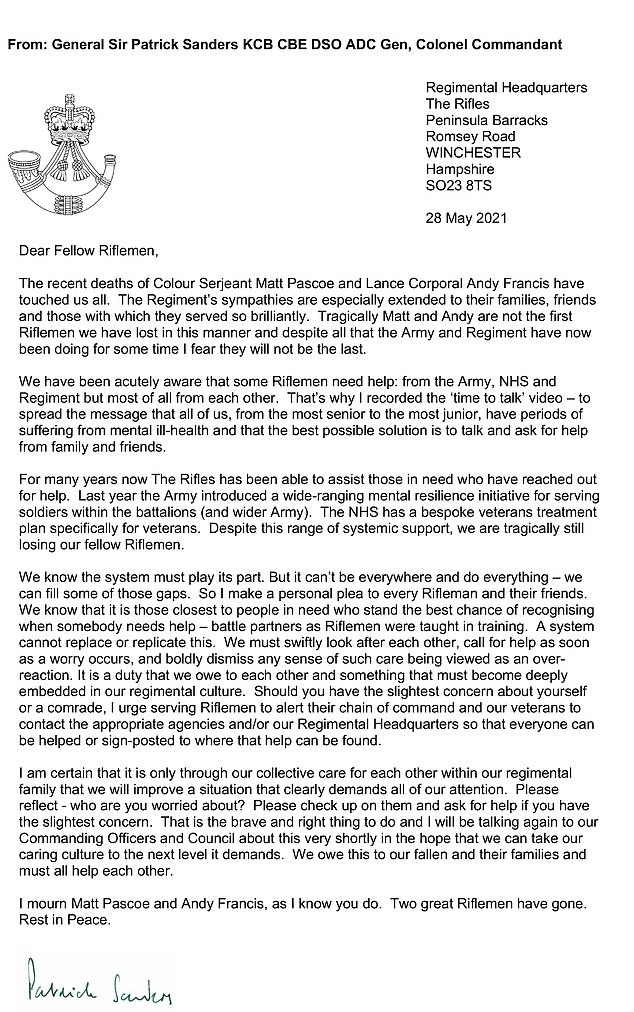 Announcing Francis and Pascoe’s deaths in a letter to serving Rifles personnel, General Patrick Saunders pointed to the services available to serving and former personnel with mental health issues, but admitted there were ‘gaps’ in the ‘system’

Former Veterans Minister Johnny Mercer called the deaths ‘appalling’ and said the lack of care for ex-service men and women was ‘a stain on the country’.

A 2019 investigation by the Daily Mail found British veterans who served in Sangin, the deadliest Afghan town for UK forces, were taking their own lives at an alarming rate.

The investigation, which focused on a C company from 2 Rifles, found the suicide rate was then more than 200 times higher than the average rate for men in the UK – 15.5 per 100,000. 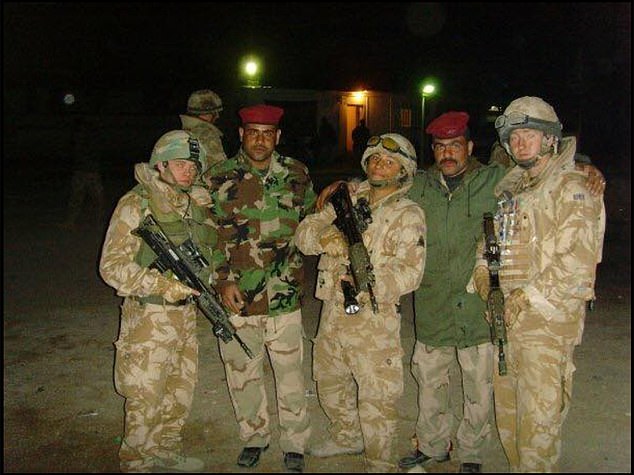 The company saw five dead and seven wounded in a Taliban attack involving improvised explosive devices and an ambush on July 10, 2009.

Three of the fatalities were teenagers and at least three more young soldiers caught up in the attack or its immediate aftermath have since killed themselves.

At least five other servicemen who were with 2 Rifles in 2009 have also been found dead in the UK, as have two other young soldiers who served with 2 Rifles on its next Afghan tour. Others in the unit have carried out non-fatal self-harm. 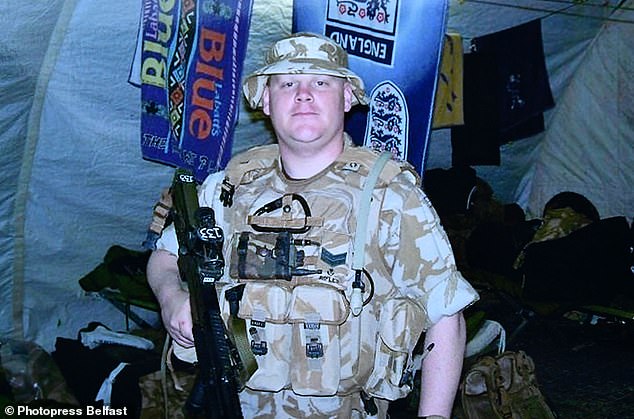 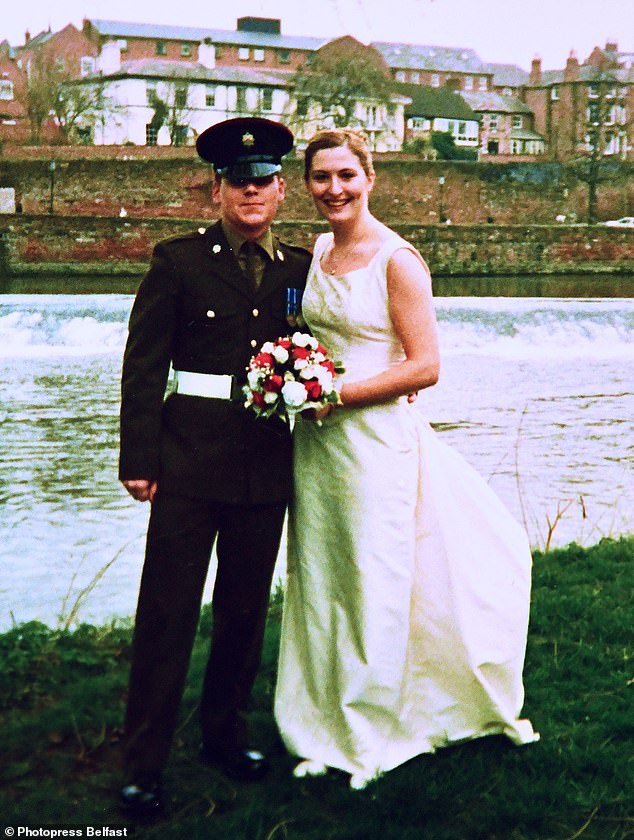 In 2019, Cole’s wife accused the Army of ‘abandoning’ her husband and his family when his mental health deteriorated as a result of combat trauma

Several of the grieving families have accused military authorities of failing in their duty of care and obstructing justice.

The wife of Corporal Jonny Cole, who made a number of suicide attempts before succeeding in 2019, accused the Army of ‘abandoning’ her husband and his family when his mental health deteriorated as a result of combat trauma.

Teresa Cole said in 2019: ‘He fought for Queen and country. But when he was medically discharged we were escorted off base as if we were criminals. They told me, ‘Don’t worry, the Rifles will look after you’. But that is not what happened.’

Mother of Lance Corporal James Ross, 30, who killed himself at the battalion’s Northern Ireland base in December 2012, levelled similar accusations.

Linda Ketcher told the Mail in 2019: ‘These boys suffer from a mental, physical and emotional illness. Yet the Army and Ministry of Defence still take the view they need to pull themselves together, to ‘man up’ in their parlance.’

It came at the start of an inquest for Ross and fellow veteran Rifleman Darren Mitchell, who took his life at the Ballykinler barracks six weeks after Ketcher’s son.

Their inquests examined the mental impact on soldiers returning from the Afghan ‘hellhole’ to remote barracks in County Down.

Mitchell’s death was ruled a suicide but the coroner said he was not satisfied Ross’s death met the required standard and was recorded as ‘accidental’. 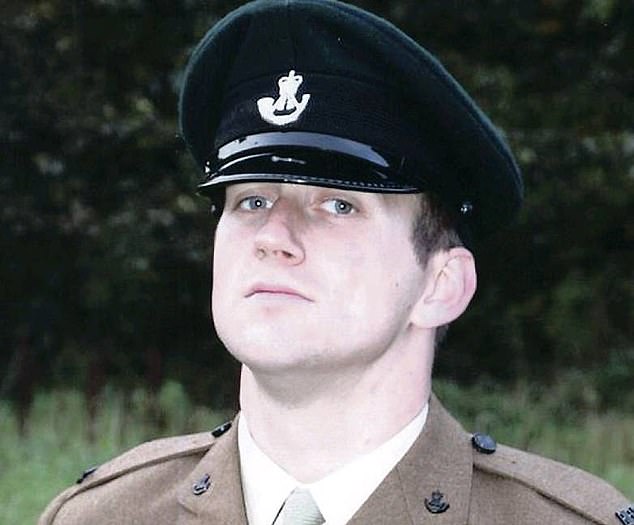 Lance Corporal James Ross, 30, killed himself at the battalion’s Northern Ireland base in December 2012 after returning from tour 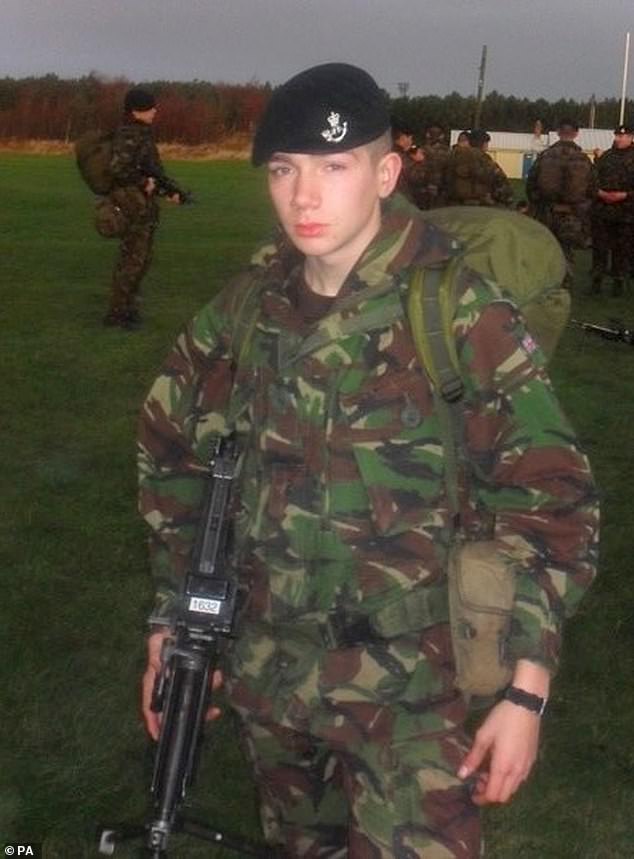 Several of Cole, Ross, Mitchell, and Francis’s former colleagues have opened up about their mental health struggles, and dedicated life after the military to veterans charities.

Former Lance Corporal Ste Nichols, 36, served alongside Francis in the Rifles and later created the Rite Flank Support Group and a YouTube channel to help veterans with mental health after attempting to take his own life.

He termed the latest spate of deaths a ‘disease’ and warned the problem could still spread because ‘suicide breeds suicide’.

Nichols, who served in Afghanistan, said there was ‘hardly any help’ when his battalion returned from tour despite people being ‘killed or wounded every day.’

‘It began on day one of our arrival and lasted for six months’.

The 36-year-old veteran said he saw ‘guys getting killed, blown in half, double amputees’ during his 2009 tour.

Suicides started just over a year after soldiers returned from the deployment, Nichols added, and peaked in 2018.

‘But, they’re still happening and the Ministry of Defence is… not taking any responsibility.’ 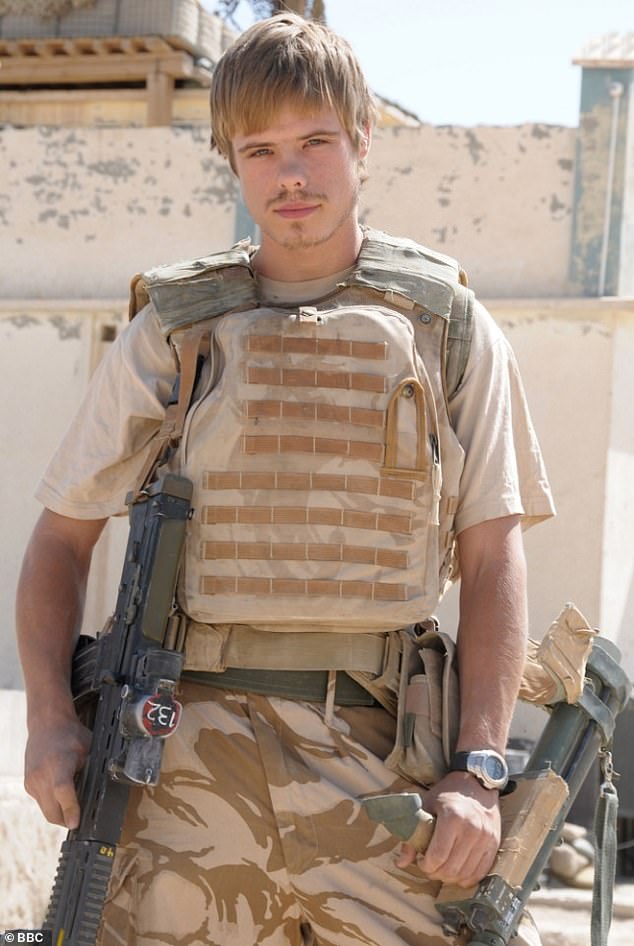 Kevin Holt, 29, was another soldier who killed himself after serving with The Rifles

Former head of the Army Lord Dannatt has levelled similar accusations at the MoD and said the department ‘needs to take action now to tackle this truly tragic situation.’

‘The intensity of the fighting experienced by soldiers from the Rifles must have had a significantly detrimental effect on the mental health of a large number of people,’ he said.

‘The MoD and the NHS still do not seem to recognise the size of the problem.’

An estimated 250 military personnel and veterans have taken their own lives since 2017, more than the 179 soldiers killed while serving in Iraq.

But, the MoD does not collate figures to include those which coroners ruled died by misadventure, meaning the number of suicides is likely much higher than records suggest.