Let’s get out of here! Motorist spots curious bears scaling a fence in Alaska in an amusing bid for freedom

A family of curious bears were spotted balancing on barbed wire at the top of a chain-link fence after scaling the  metal barrier in Alaska.

Amy Bragg, 48, was driving near Anchorage when she noticed two black bear cubs loitering by a tall metal fence with their mother.

The mother bear then began to scale the fence, which separated the family from a field, with her two ‘cinnamon-colored’ cubs following closely behind.

Photographs show the small bears gripping the jagged barbed wire at the top of the fence before pulling themselves up and peering over the top. 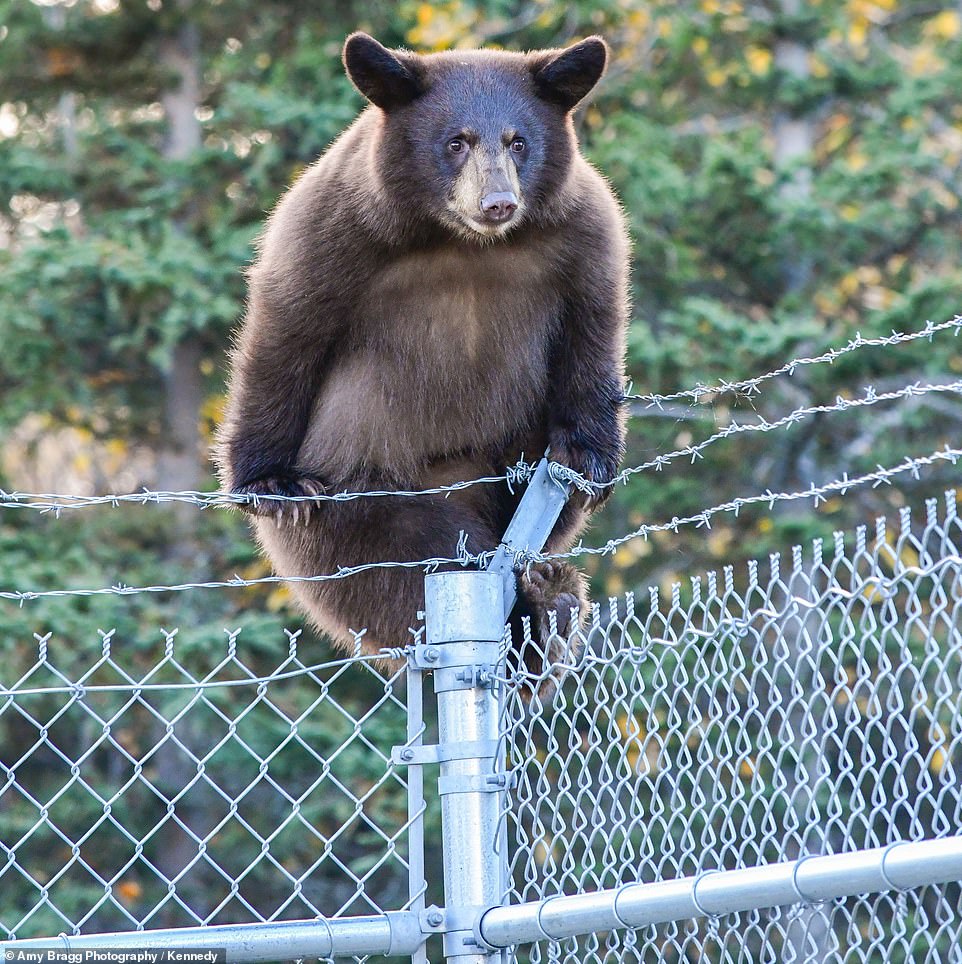 Amy Bragg, 48, was out on a drive in Alaska when she noticed a ‘cinnamon-colored’ black bear scaling a very tall metal fence 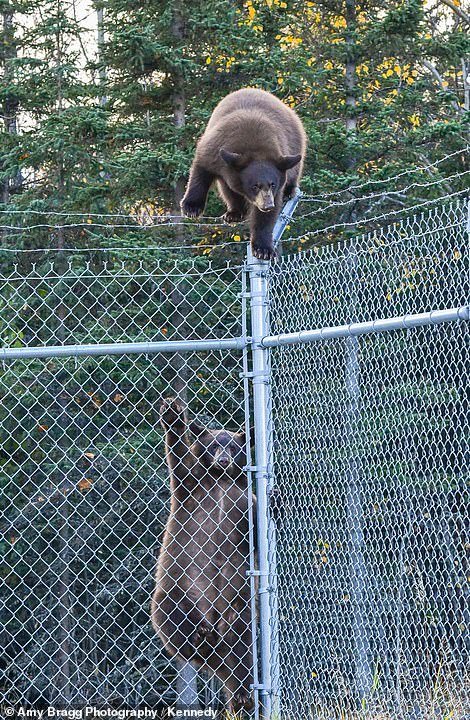 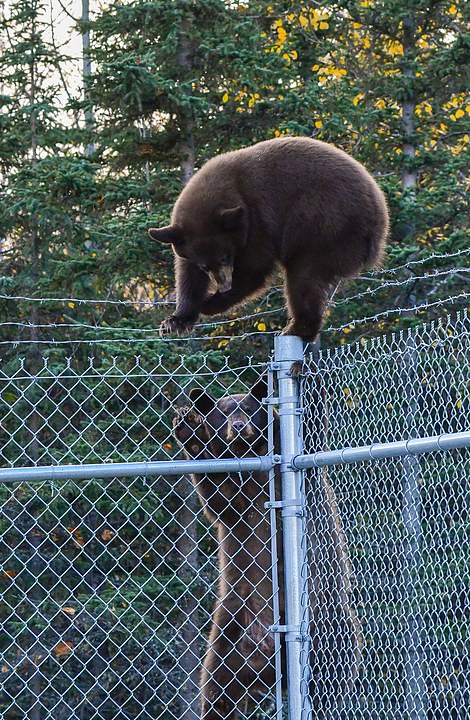 The curious bear was followed closely by its twin, who used his claws to grip the chain-link fence and pull itself over the top

One of the cubs then balances on the fence pole as it carefully clambers over the jagged wire with its twin following closely behind.

Ms Bragg managed to capture photographs of the sibling cubs together when they clambered on the floor.

One cheeky cub even appears to stick its tongue out at the watching photographer.

Ms Bragg, from Anchorage, Alaska, said: ‘It was my first time seeing cinnamon-colored black bear cubs. With them being twins, it was just a real treat.

‘It was definitely a highlight for me because I had never seen a mama black bear with the brown cubs before. 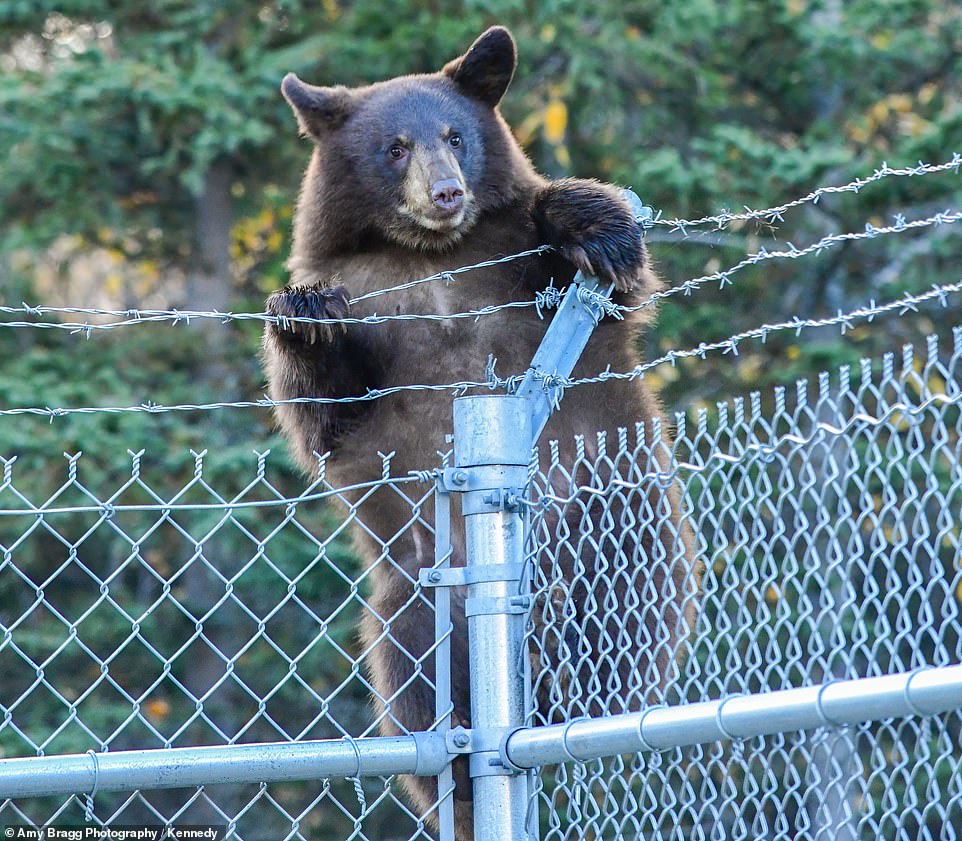 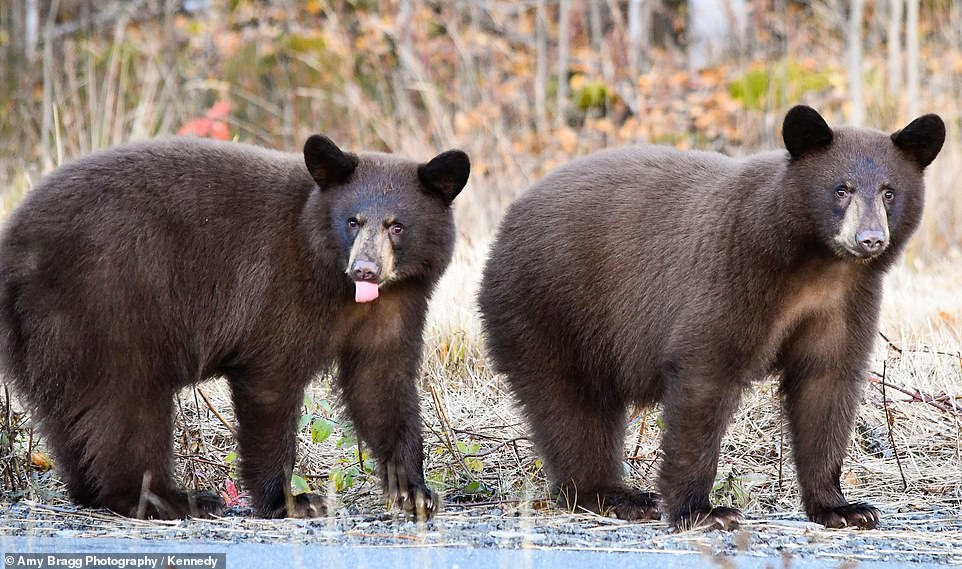 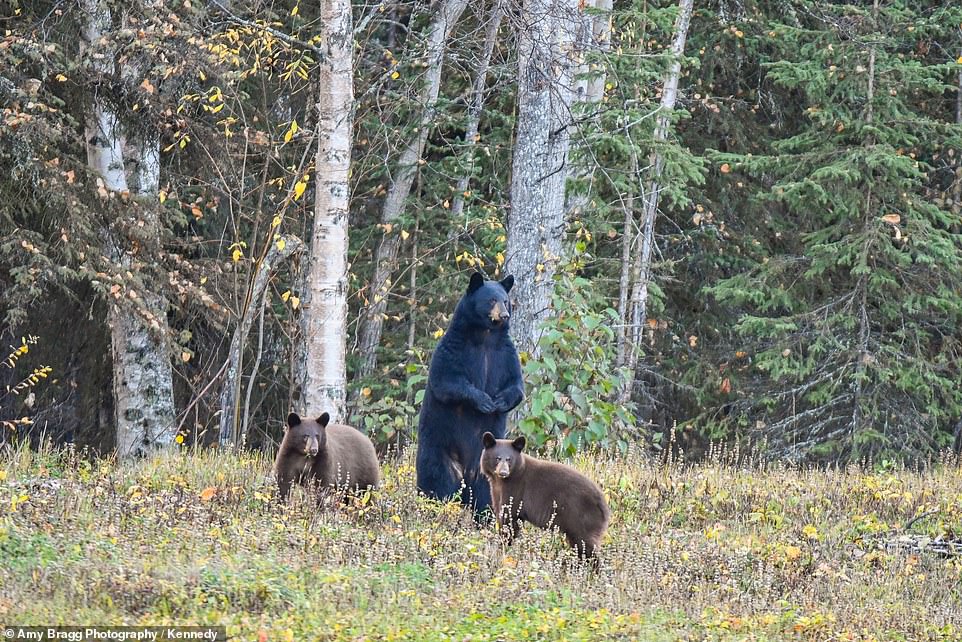 The teacher watched the two ‘cinnamon-colored’ bear cubs with their mother for an hour as they grazed near Anchorage, Alaska

‘It really is amazing that you can just see this right where you live. I am a teacher by day and I do photography as a hobby.

‘I drive around looking for wildlife to photograph and I happened to come across a mama bear with her twin cinnamon-colored cubs.

‘They weren’t bothered by me. The barbed wire did not bother him at all either.’

Ms Bragg said the cubs scaled the fence with ‘no problem’ after their mother led the way.

She said: ‘He did not have any torn pads on the bottom of his feet and there was no blood. It did not slow them down at all. They scaled that fence no problem.

‘Mum went over the fence first and the cubs just crawled up it like it was no big deal. They were just crossing the road.

‘There was a fence, they climbed it and they continued on their way grazing on the grass. 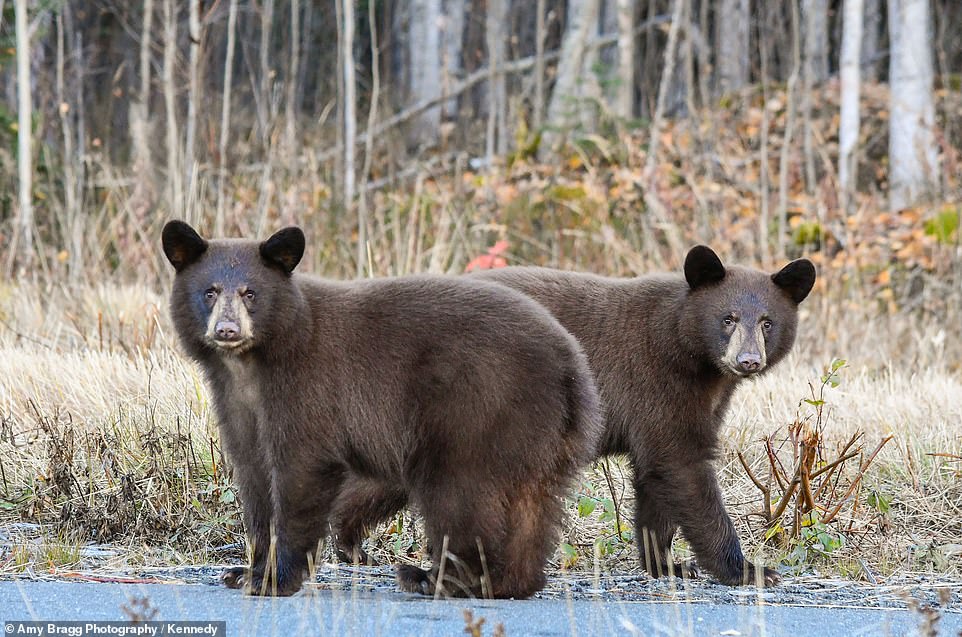 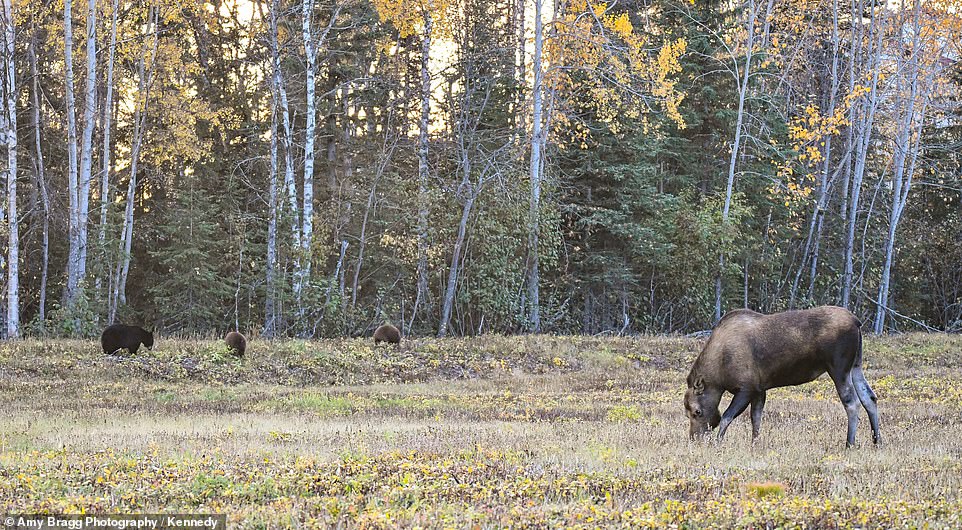 As Ms Bragg watched the family of bears, a moose stumbled into the field and began to feed – but neither were disturbed

‘There is one that’s a close up of the cub on the fence and the look that he’s giving me is so cheeky.

‘Bears are really inquisitive. They were curious about me too, but they never approached me or anything like that. I was nervous that they might.

‘I was a safe distance away. I was in my car taking pictures so they weren’t bothered by me. 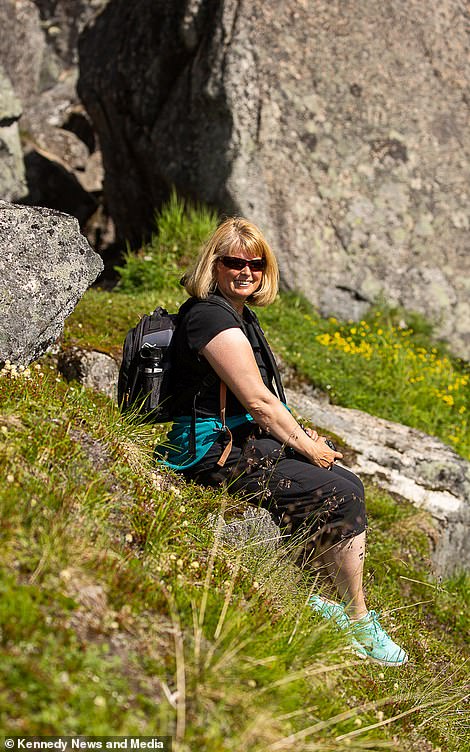 Ms Bragg, 48, watched the small family of bears for an hour as they continued to graze on the field

‘They didn’t run back into the woods, they weren’t scared of me and I kept a respectable distance. They didn’t feel threatened and I certainly didn’t want to mess with a protective mama of cubs.

‘As much as I want to get a nice picture and see them with my own eyes it’s not worth risking your life for.’

Ms Bragg spent an hour watching the cubs and their mother grazing in the field – but feared she would witness a bear attack when a moose joined them.

Luckily, the bears weren’t bothered by the stranger and all four animals continued to eat in peace during their meeting last October.

The teacher, who has been a wildlife photographer for around five years, said: ‘They just hung around and kept eating grass.

‘I have another picture of that same incident where a moose came into the same field where they were eating.

‘I was thinking, “Oh my goodness, I’m going to see an attack right before my eyes. That mama black bear might go and attack the moose to feed off it with her cubs”.

‘But they all just ate in the same field about 150 yards from each other. Everyone got along. I have a picture of the three bears and the moose all together and eating.

‘I was there for about an hour. My husband had called me and asked me what I was doing, and I said “I’ve found a mama black bear with two cubs, I’ve got to go”.

‘Then I hung up and I was taking pictures and a short time later he called me and asked what I was doing and I said “I’m taking pictures”. He said, “You’re still out there?”

‘I’ve been getting lots of positive comments on the pictures. People think that they’re cute.’