Mum, 32, loses custody of her daughter, 4, after judge rules she’s ‘too Western to raise the child’ in Saudi Arabia – The Sun

A MOTHER has lost custody of her daughter, 4, after a judge ruled she was "too Western" to raise the child well in Saudi Arabia.

Bethany Vierra, a 32-year-old American student and yoga teacher, was denied custody on the basis she was "new to Islam, is a foreigner in this country, and continues to definitively embrace the customs and traditions of her upbringing". 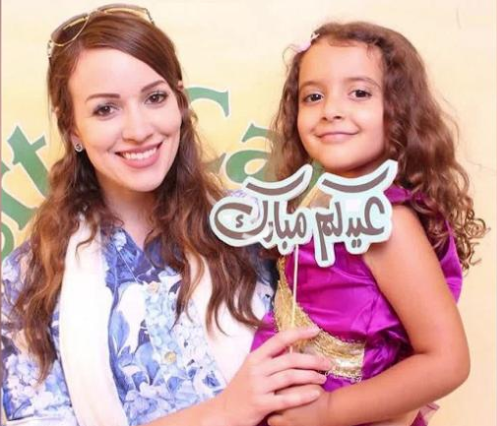 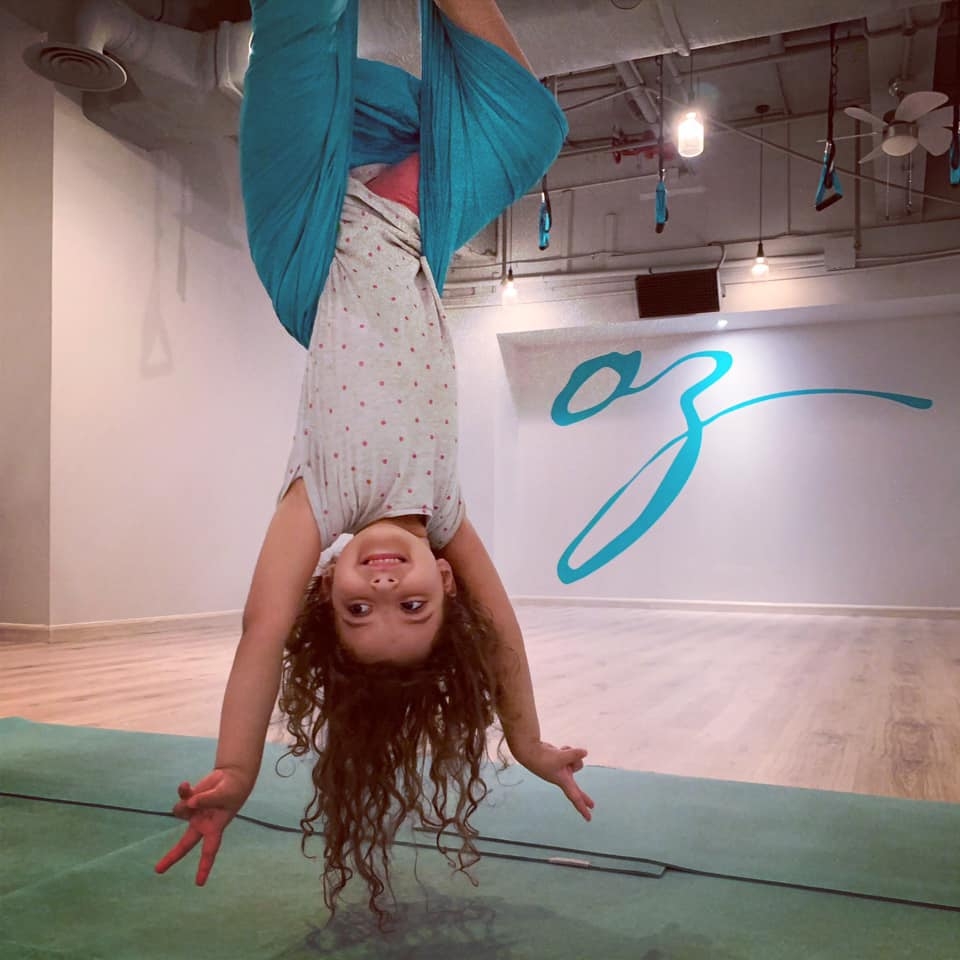 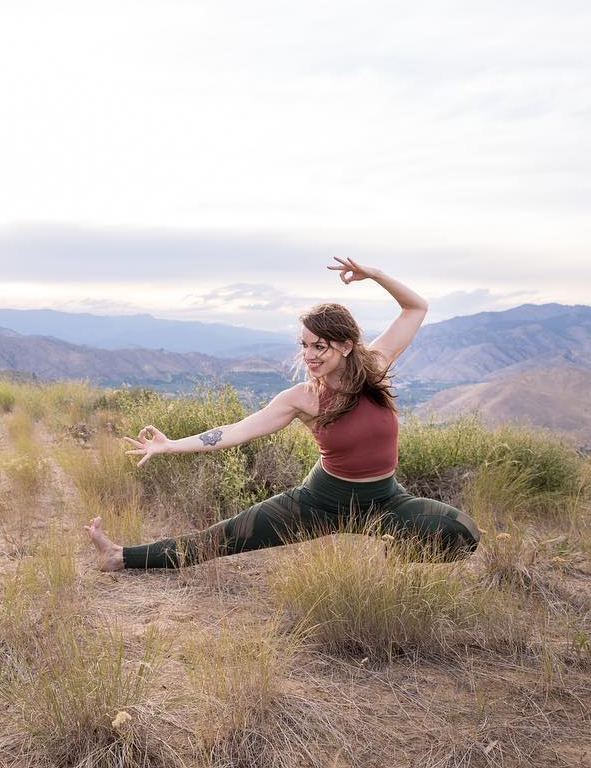 Vierra moved to the conservative Islamic Kingdom in 2011 to teach at a university.

She recently divorced her Saudi husband and sought custody of their four-year-old daughter, Zaina.

But Judge Abdul-Ellah ibn Mohammed al-Tuwaijri ruled last month: "We must avoid exposing (Zaina) to these (Western) customs and traditions, especially at this early age," as reported by CNN.

Vierra was accused of living an un-Islamic lifestyle and her ex-husband used her social media postings as evidence in statements submitted to court.

Accusations included a trip to the US music festival Burning Man, which was characterised in court documents as "the world's strangest festival" where attendees "appear in crazy clothes and stay awake all night dancing and surrounded by people wearing only shoes made of fur, or drinking drugs (sic) or cold drinks."

This judge's ruling deems the majority of the billions of people in the world unfit to parent a child.

According to the judge's notes, counsel for her ex-husband accused her of engaging in social media channels "full of nudity, intermingling of the two sexes and a lot of things and actions contrary to our religion and customs and traditions."

Al-Tuwaijri noted: "The fact that the father is residing with his mother is likely a temporary situation.

"Knowing that it is in men's nature not to stay at home and not to honor/fulfill parental role themselves."

But Vierra argued her ex-husband was an unfit parent, alleging that he was verbally abusive and used drugs.

Vierra was given until this Sunday to appeal the custody ruling and collect all necessary documents.

Her daughter Zaina remains with her.

"It was hard enough when the judge heard all the injustice and abuse that Z and I had endured over the years, yet still ruled that I was unfit to parent simply because I am a Westerner.

The judge … ruled that I was unfit to parent simply because I am a Westerner.

"There aren’t many things I do well, but being mother to Zaina is one thing I know that I was divinely designed to be.

"She’s my everything, my purpose, my sidekick and my joy. I’ve raised a beautiful, intelligent and healthy baby girl – and I’ve essentially done it alone."

Vierra detailed her experience as a mother, describing how she stayed at home to raise Zaina for three years and the returned to work to support her financially after her ex-husband quit his job.

She said: "I dropped my life, my dreams, my dear family, my incredible friends, my best years, and my beautiful country just to invest in Saudi to keep her near her roots and Saudi family."

Recounting her PhD and masters degree in Islamic studies, Vierra explained: "I fought to bridge the gap and prevent westerners from damagingly stereotyping Saudis, to defend and help the world relate to and humanise Islam.

"The judge's ruling destroyed us. Zaina overheard the lawyers telling me that one of the reasons she was ruled to be removed from my custody was her being fluent in English – and not speaking Arabic well.

"She ran into my room hysterical, clinging to me and protesting that she DOES speak Arabic!!!

"For 73 minutes she clung to me, counting from 1 to 10 in Arabic on repeat while crying."

Vierra went on to detail how her daughter has started wetting the bed, having nightmares, and crying every time she leaves the room.

"For the last year throughout this massive injustice of a legal battle – I have found myself at rock bottom, only to find myself being forced beneath whatever waste is under those rocks at the bottom of it all.

"Facing my abusers in search of justice while still they get immunity in a court of law – they commit crime after crime and walk away unscathed.

"What is my crime? Doing a handstand? Not being Saudi? Not covering my body while I was on vacation in the United States of America?

"This judge's ruling deems the majority of the billions of people in the world unfit to parent a child.

"The judge's ruling is far from sharia law that would protect my rights as her mother to be with my young child until she reaches the age of maturity, it’s far from international treaties that have been signed and ratified by Saudi Arabia (CRC & CEDAW) vowing to protect children from abusive environments and me from discrimination under the law.

What is my crime? Doing a handstand? Not being Saudi? Not covering my body while I was on vacation in the United States of America?

"It’s far from the vision and direction that this country has vowed to go and I’m at a loss for words.

"Last night, I found out that the Saudi Ministry of Justice has placed me on a 10 year travel ban. 10 years! There’s also an arrest warrant out for me, because since the custody ruling was issued, Zaina didn’t attend visitation sessions.

"I was confused about the change in rulings. Nobody informed me visitation should be ongoing regardless of the change to custody, not a single message or warning from Mawadah, the place that normally facilitated visitation.

"Frankly, I don’t have 10 more years of tolerating such injustice and ugliness left in me and frankly, I’m already living in prison.

"Only problem now is, Zaina is now being dragged into this prison with me.

"Zaina deserves better than this.
"Please don’t take my sunshine away."

Zaina's American grandparents, Kathi and Myron Vierra, have also spoken of their heartbreak.

Just this month, women in Saudi Arabia were granted the freedom to travel abroad without male permission.

The new rule allows women over the age of 21 to apply for a passport without authorisation, as part of sweeping new reforms to liberalise the conservative Islamic kingdom. 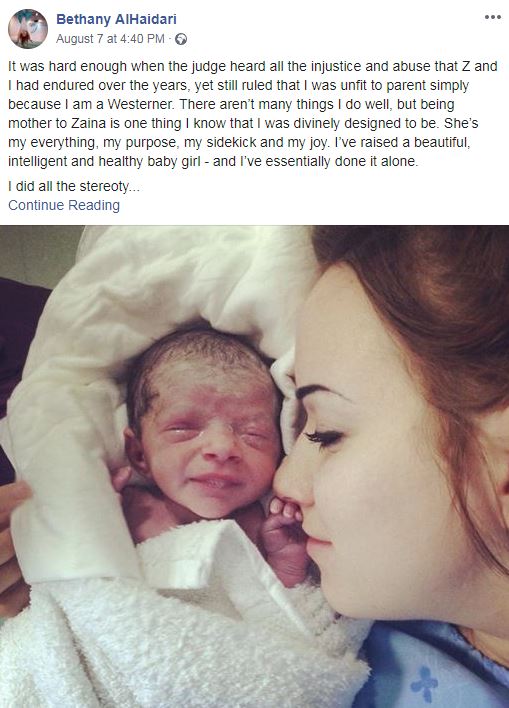