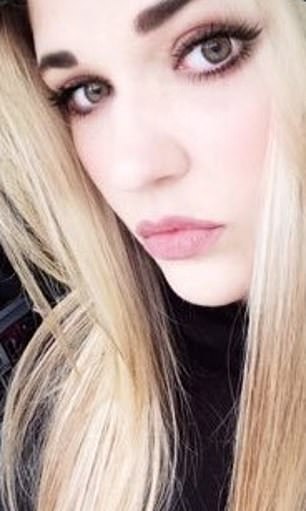 A qualified music technician has been left reeling after her job application was turned down – because she is ‘female’ and the role may be too ‘complex’ for her.

Karis Page from Kent has two degrees and has toured the world with bands, as well as being a director for a major record label, according to her online profile, but she was rejected by a music firm for a role this week because of her sex, she has revealed.

Miss Page, who is also a blogger, applied for the ‘Technician in Audio and Arts’ role but was stunned when the firm she has not named responded telling her why she was not shortlisted.

A letter to her from the company stated: ‘Thank you for your interest in the above position.

‘There has been an extremely large response to the advertisement and the quality and standard of applicants has been very high. 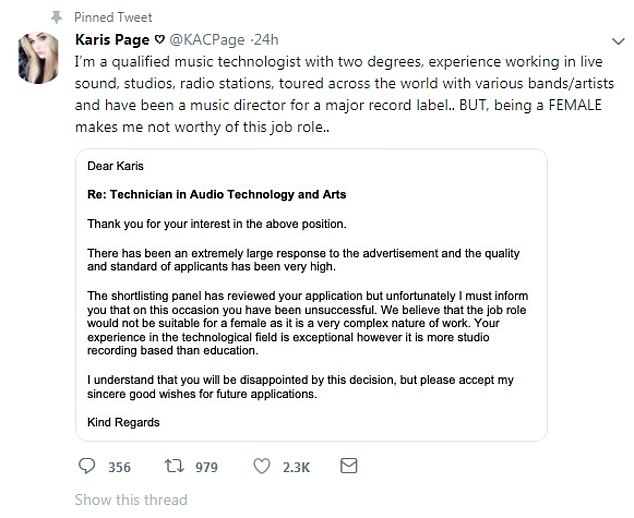 ‘The shortlisting panel has reviewed your application but unfortunately I must inform you that on this occasion you have been unsuccessful. We believe that the job role would not be suitable for a female as it is a very complex nature of work.

‘Your experience in the technological field is exceptional however it is more studio recording based than education.

‘I understand that you will be disappointed by this decision, but please accept my sincere good wishes for future applications.

Posting the response on Twitter the musician who has also published a book on music said: ‘I’m a qualified music technologist with two degrees, experience working in live sound, studios, radio stations, toured across the world with various bands/artists and have been a music director for a major record label.. BUT, being a FEMALE makes me not worthy of this job role.’

After posting the response on social media the blogger also said she has been threatened by men.

She said: ‘To all the people who have shouted into my mentions today saying this email is fake, bull****  or whatever else.. it’s d******ds like you that cause people to not speak up or talk openly about any kind of sexism, racism, gender discrimination etc.

‘If it doesn’t concern you, leave.’

He said: ‘Come on sweetheart, they’ve got a point. Work isn’t the place for little fitties who get f******d on a street corner. Anyway, what you doing this weekend? I’m happy to do the male part and take you for a drink if you’re gonna s*** me off.’

Another man named Collin said: ‘Please STFU about your I’m a female so I don’t get the job roll (sic) maybe you’re just not someone they want at the company because you’re f*****g stupid lol.’