KIEV (Reuters) – Volodymyr Zelenskiy, front runner to be the next Ukrainian president, has connections to one of the country’s wealthiest tycoons that are undermining his image as an insurgent who will sweep aside the powerful moneyed elite. 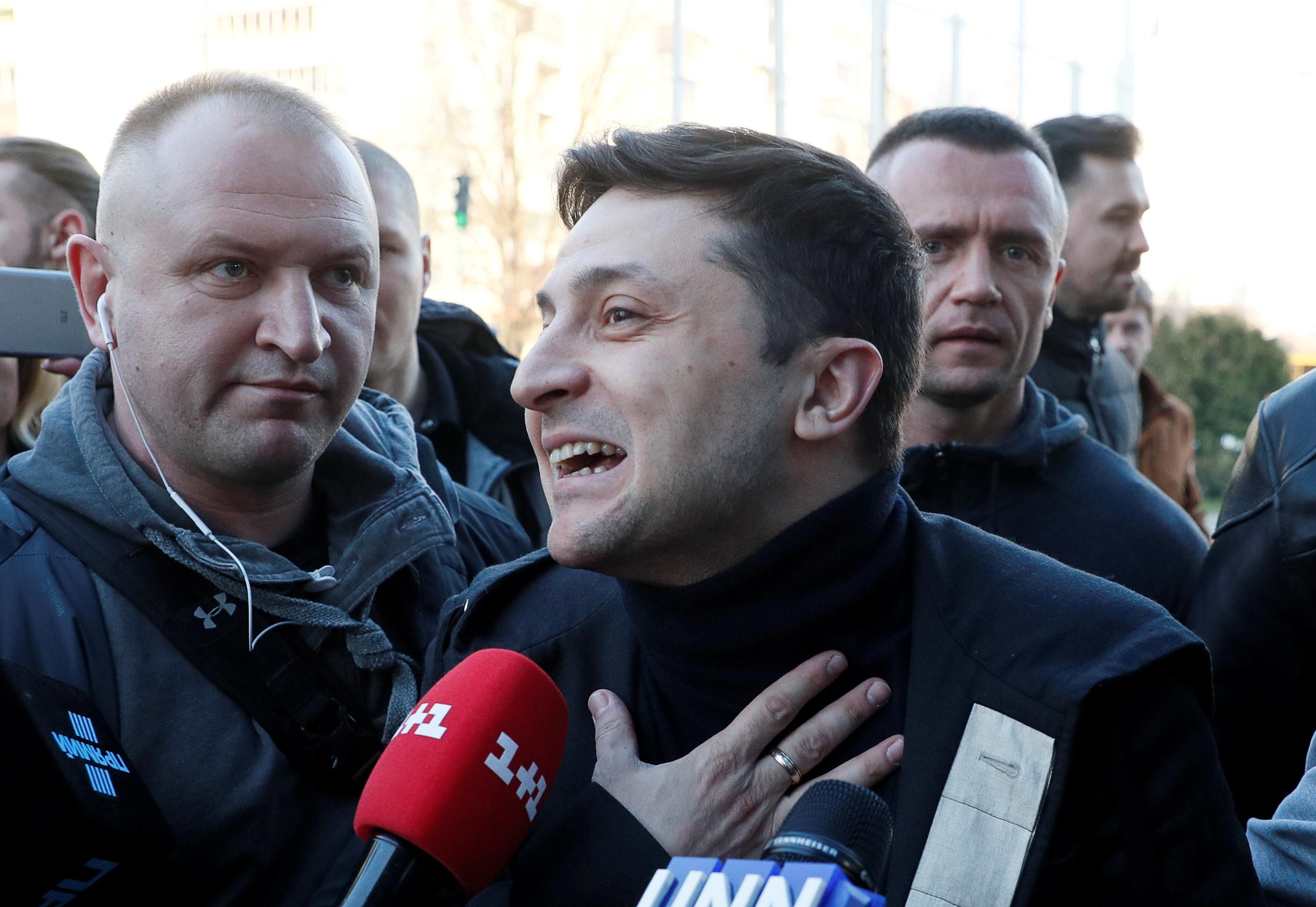 Presenting himself as an anti-establishment outsider backed by spontaneous grass-roots support, Zelenskiy won the first round of voting last month, and opinion polls make him strong favorite in the run-off on April 21 against the incumbent president, Petro Poroshenko.

Zelenskiy’s ties to oligarch Ihor Kolomoisky have, however, become an election issue. Poroshenko has said that, if elected, Zelenskiy will do the businessman’s bidding, something the front runner denies. In interviews, Zelenskiy has bridled at suggestions he is Kolomoisky’s “puppet”.

The Ukrainian government has alleged that billions of dollars were fraudulently siphoned out of PrivatBank, Ukraine’s biggest lender, while Kolomoisky owned it. It has since been nationalized. Kolomoisky denied any wrongdoing.

Zelenskiy’s celebrity was established by a comedy show – in which he played an everyman who accidentally becomes president – broadcast by 1+1, a TV network controlled by Kolomoisky.

A study by Reuters of vehicle registration databases, company ownership documents and photographic records indicates that Kolomoisky and the Zelenskiy intersect in other ways.

According to that evidence, the two men have business partners in common, Zelenskiy uses security staff also seen in the past accompanying Kolomoisky, a former Kolomoisky adviser is on Zelenskiy’s campaign team and at least two vehicles used by Zelenskiy and his entourage are owned by people or entities linked to Kolomoisky.

None of the evidence demonstrates that Kolomoisky is financing Zelenskiy’s campaign or influencing him.

Both Zelenskiy and Kolomoisky have said their relationship is strictly professional, and centered on the comedian’s TV work. Both say no undue influence is being exerted by the oligarch.

While Zelenskiy’s connections to Kolomoisky are not seen as swaying the election result, given the candidate’s popularity with voters, commentators question how the relationship would develop later.

“The risks of influence are there, and they will most likely become evident in his hiring policies,” said Volodymyr Fesenko, political analyst and director of Kiev’s Penta think-tank.

“If Zelenskiy becomes president, taking into account that he basically doesn’t have any people, or has very few, Kolomoisky can suggest different people to him (for government office) through whom he will then exert his influence on power.”

Asked to comment on the connections documented by Reuters, Zelenskiy’s campaign did not reply. Kolomoisky did not reply to a request for comment sent to him via his 1+1 media company.

After one campaign stop on April 5, Zelenskiy squeezed through a scrum of journalists and climbed into a black bulletproof Mercedes that was registered, according to a vehicle ownership database, to an associate of Kolomoisky.

The Mercedes was registered in the name of a Ukrainian businessman called Timur Mindych, who is on the board of trustees of the Jewish Community of Dnipropetrovsk, a body of which Kolomoisky is president.

Until recently Mindych shared ownership with Kolomoisky of Vision TV. In 2017 Mindych was registered as holding a 9 percent stake in Kolomoisky’s Belize offshore company, Harley Trading Limited, one of the firms via which Kolomoisky controls the 1+1 media empire.

Mindych is also a part of Zelenskiy’s orbit.

Cyprus and Ukrainian business registry records show that he is a co-owner of Cyprus-registered Green Family Ltd, founded by Zelenskiy and his partners in 2012. Zelenskiy exited the company in January this year.

Calls to a phone number listed for Mindych went unanswered.

Some of the people helping Zelenskiy with his election campaign have worked in the past for Kolomoisky.

A lawyer called Andrei Bogdan is on Zelenskiy’s staff, and represented him at a meeting with a government official last week, the official’s press office confirmed.

Bogdan became Kolomoisky’s adviser in 2014, when the businessman was the governor of Dnipropetrovsk region, the lawyer told the Ukrainian Pravda newspaper in 2016.

At the appearance in April, Zelenskiy was accompanied by a man who appeared to be in his security detail. The two were also photographed together during the campaign in the city of Lviv.

Reuters has also found photographs from six different occasions when the same man was with Kolomoisky.

Earlier this year, members of Zelenskiy’s security detail were filmed with him in a van owned by a company connected to Kolomoisky. Asked for comment, Zelenskiy’s campaign and Kolomoisky’s representatives did not reply.