Instead, 918 people – 304 of them children – were coerced into drinking a tonic of poison, suffering a painful death at the hands of a cult leader. 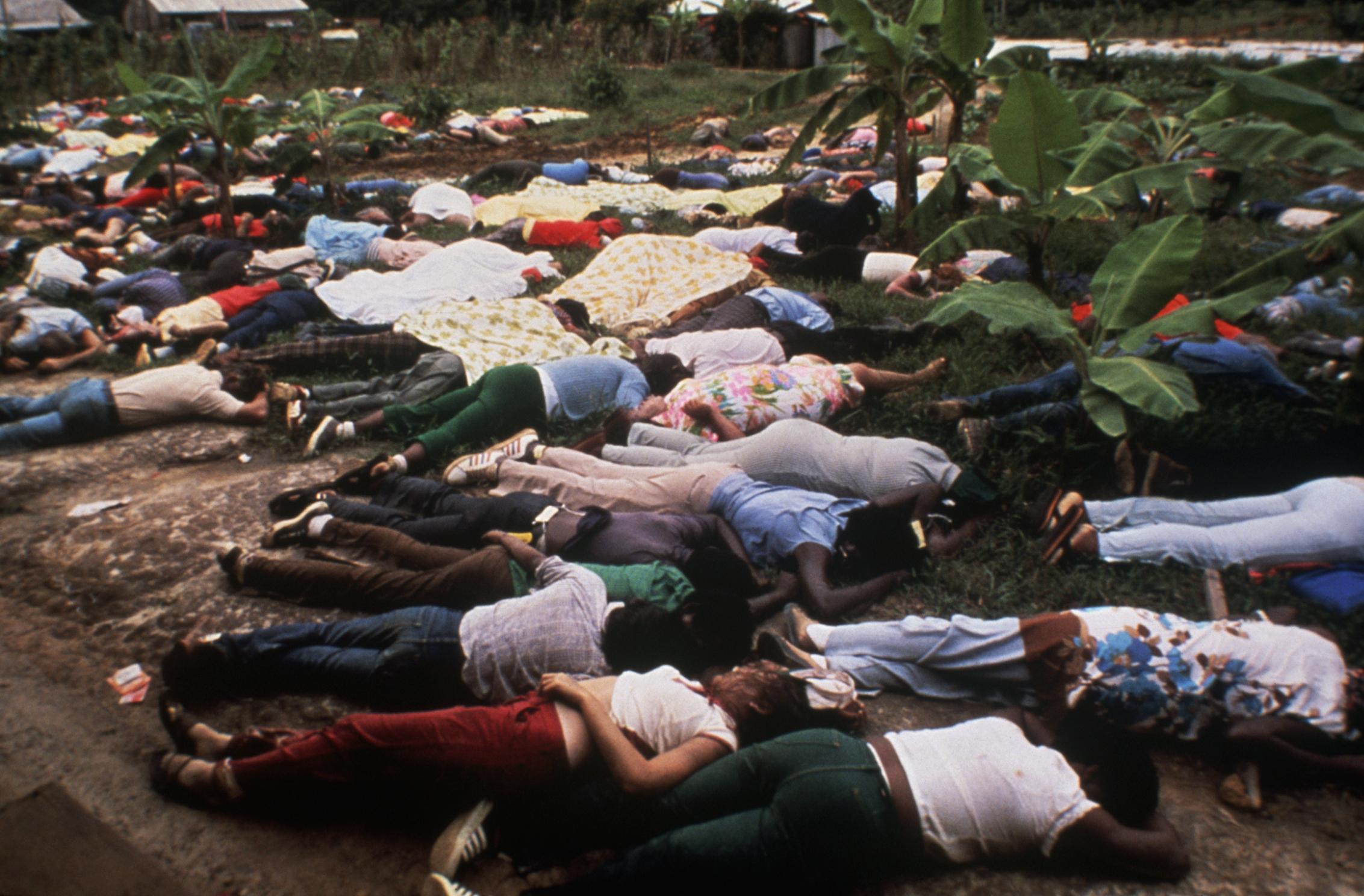 This weekend is the 40th anniversary of the Jonestown massacre, which was the biggest ever loss of American civilians prior to 9/11.

Spearheaded by Jim Jones, almost 1,000 people had moved to the remote settlement of Jonestown in French Guyana to establish "utopia".

However, what emerged was closer to hell: Jones's followers were used as sex slaves, forced to work 12- hour days and children were made to drink sick.

Their ordeal culminated in them being killed by drinking Kool-Aid laced with cyanide. 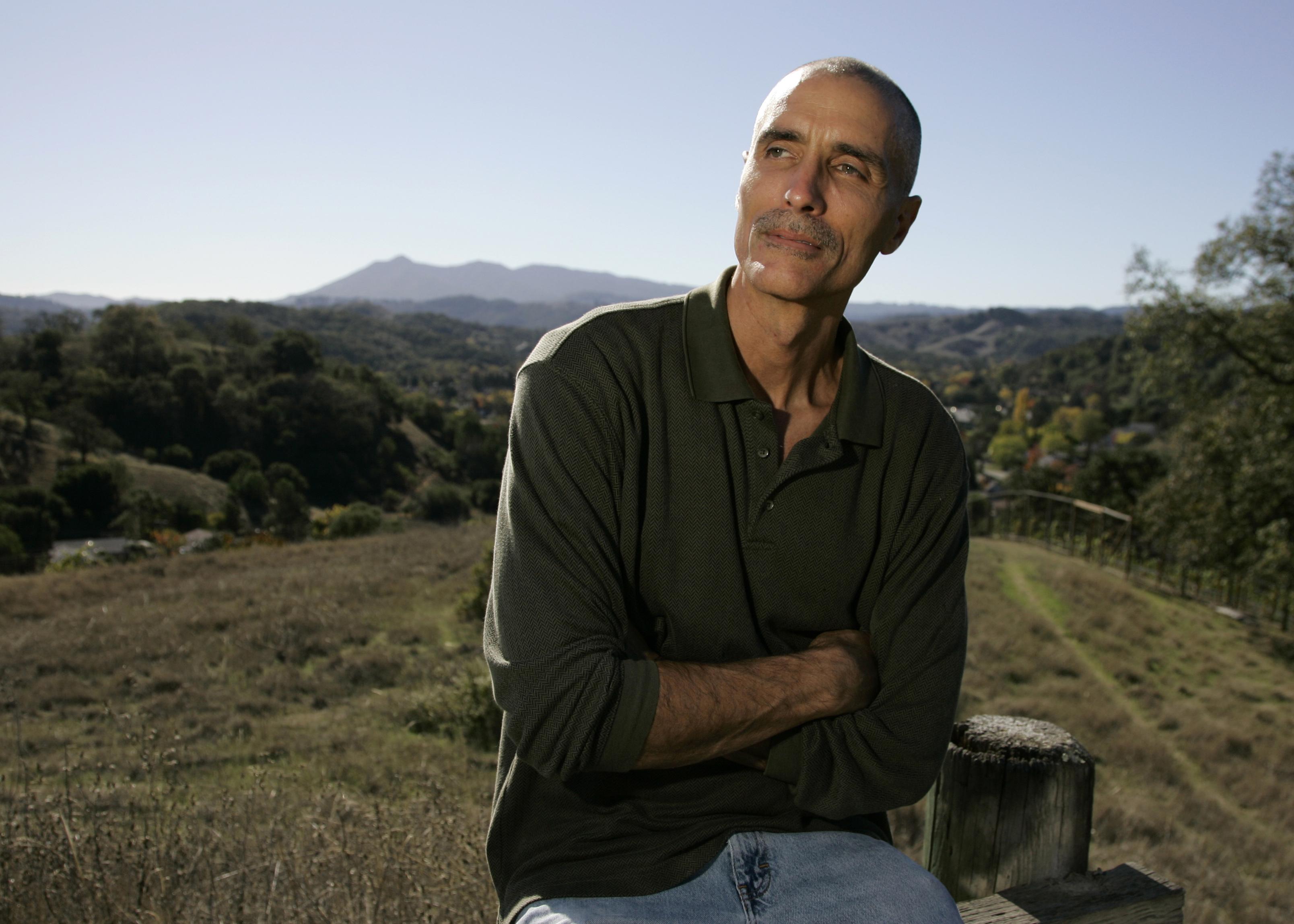 Forty years on, one of Jones' nine children, Stephen, reveals he still feels guilty that he couldn't steer his father in a different direction before the horrific event.

Here, were reveal the incidents that led to the fateful night of 18 November 1978.

A preacher obsessed with Hitler

Preacher Jim Jones, who was obsessed with religion as well as dictators Stalin and Hitler, had opened his first church in Indianapolis in the mid-1950s.

Called the Peoples Temple, it was a progressive organisation, attracting a large African American congregation.

Jones mixed biblical teachings with Marxist theory, something he described as "apostolic socialism" and said he planned to create a "utopia".

He was charismatic, involved in humanitarian causes and by the early 1970s, Jones had temples in San Francisco and Los Angeles. 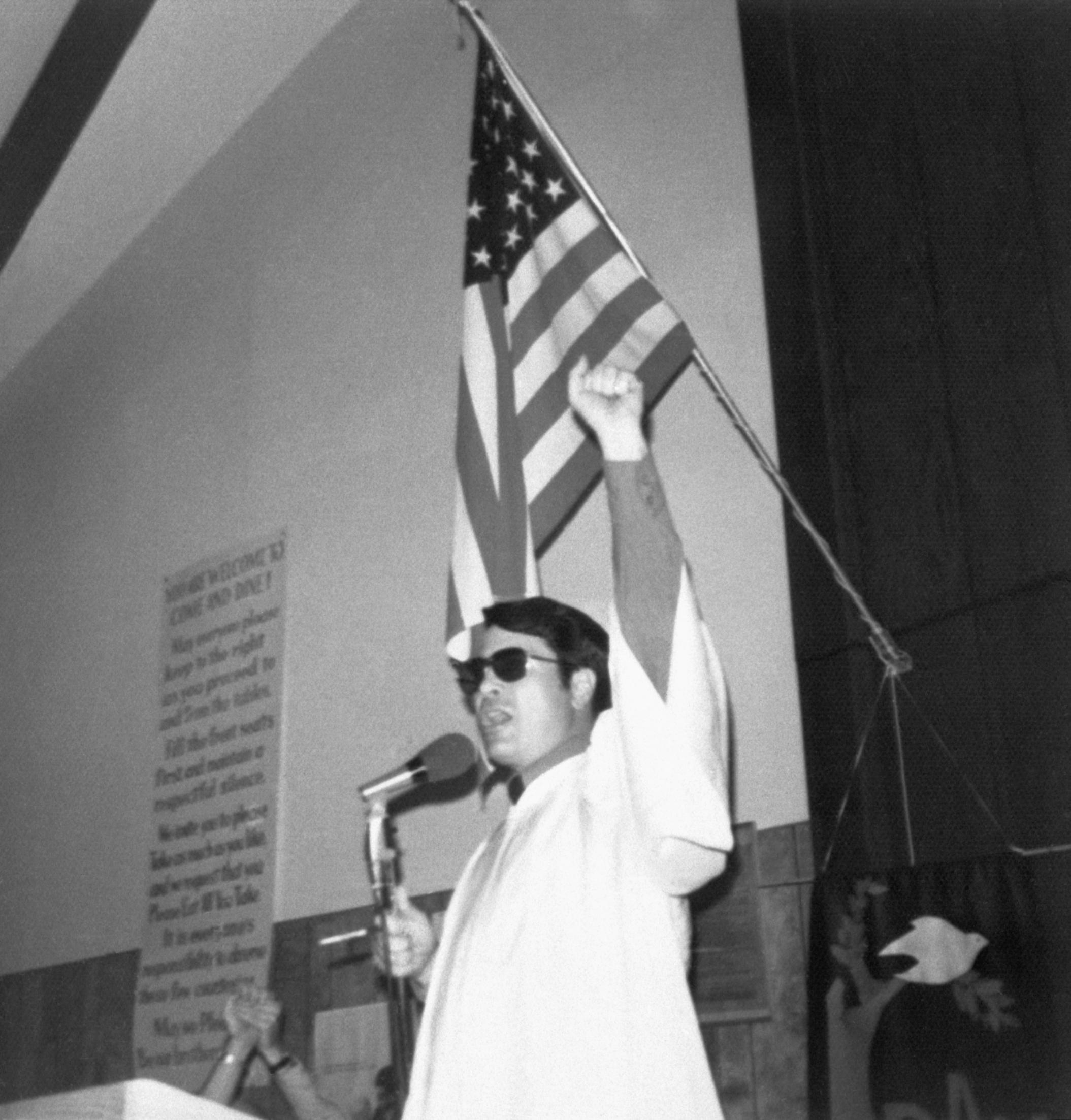 However, behind the veneer of respectability he was a drug addict who treated his followers poorly – bullying and physically assaulting them, as well as forcing them to sign their homes over to him.

Members were also encouraged to cut themselves off from family members who weren't part of the group and the most vulnerable followers were told that if they quit the Peoples Temple they'd end up in concentration camps. 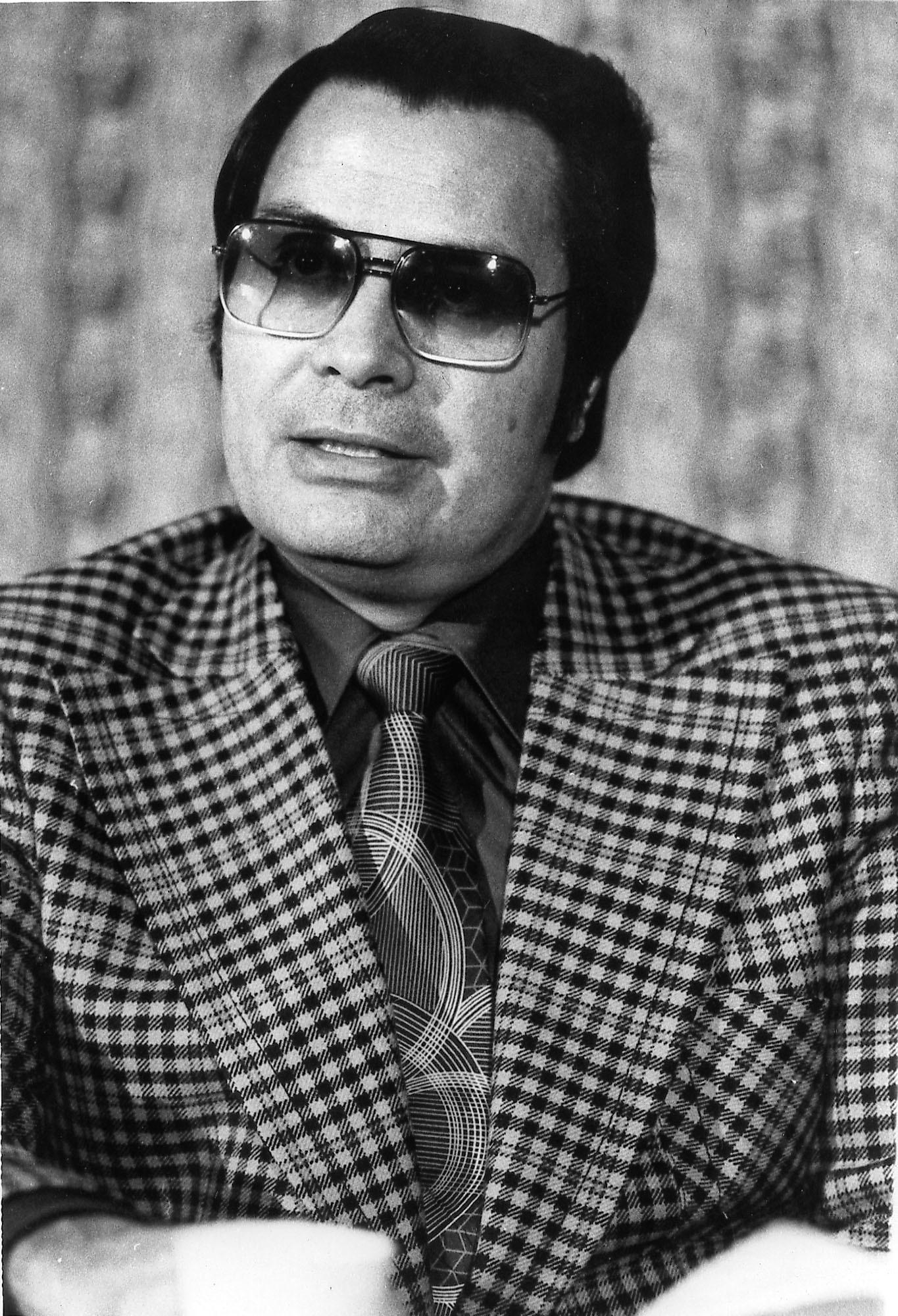 In 1977, the Peoples Temple received bad press when an article revealed that fraud was rife within the organisation.

Jones fled to Guyana in South America, a site where 30 members had established a farming community.

The compound, which Jones called Jonestown after himself, was billed a settlement that would be free from violence, racism and sexism.

Almost 1,000 of his brainwashed followers, under the spell of their charismatic leader and worried about the sect splitting when Jones left the US, followed him there.

However, it was a far cry from what they were promised. 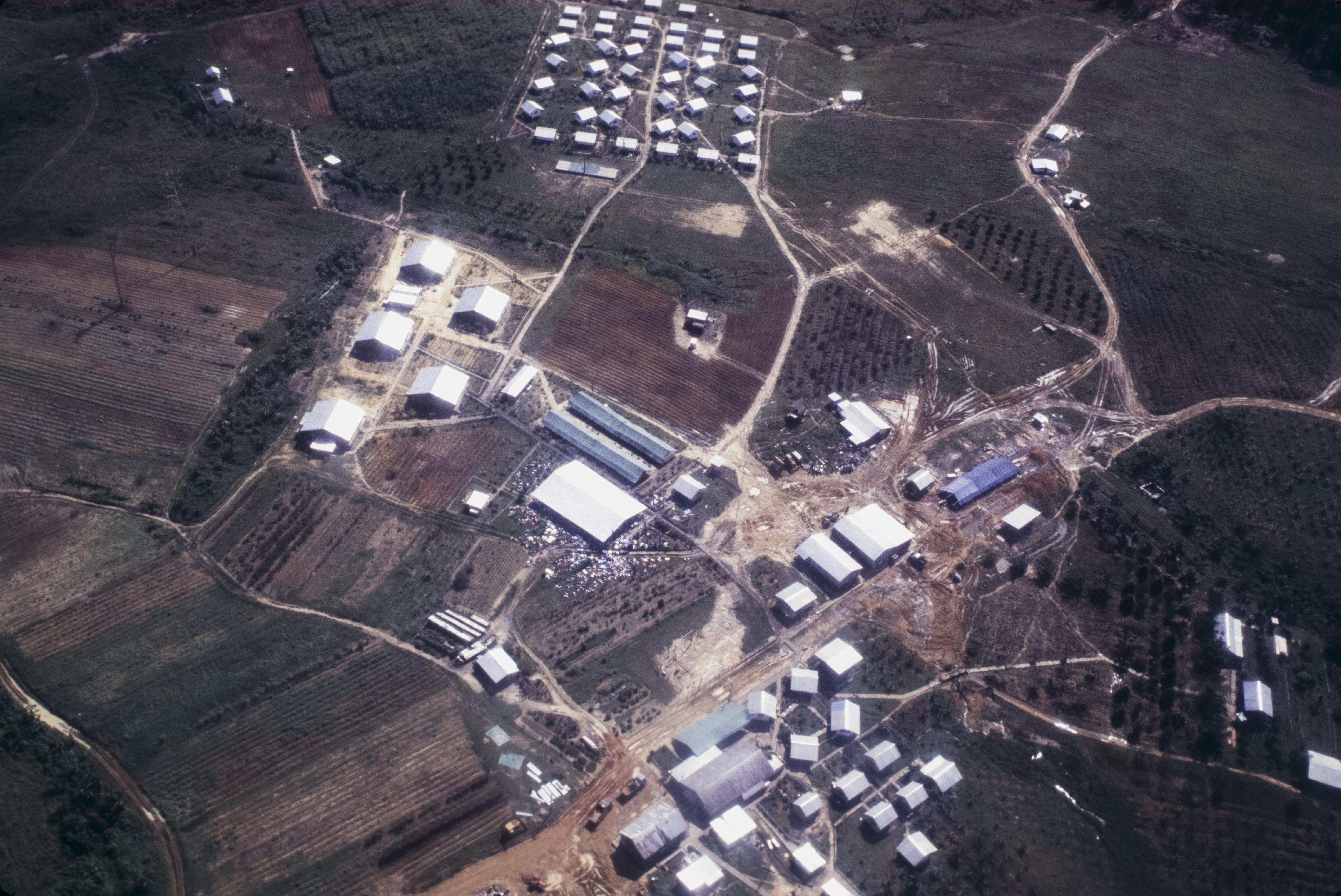 Jones forced them to work at the overcrowded settlement, which was constantly patrolled by armed guards to detract any defectors, from dawn until dusk, six days a week with barely any breaks.

Afterwards, they would attend 'classes' in socialism, where they were forced to watch Soviet propaganda videos for hours on end, and were subjected to mind control experiments.

Depraved Jones treated many of his followers – both male and female – as sex slaves despite the fact that he had a wife, Marceline, and he'd often forcibly drug them with tranquillisers such as Valium. 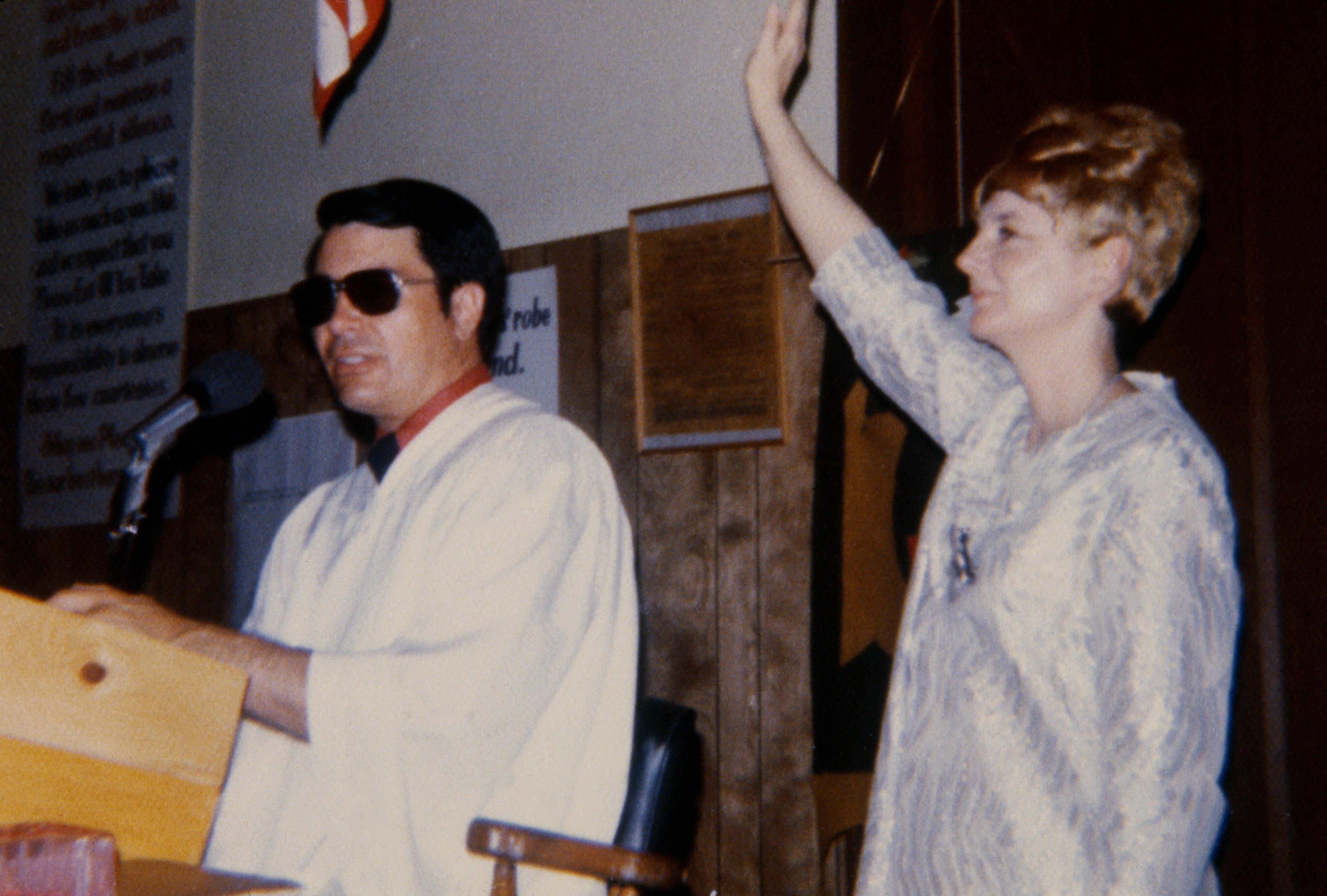 The followers were also brutally disciplined for misbehaving, for 'crimes' as innocuous as getting their ears pierced.

Punishment included being imprisoned in a plywood box and forcing children to spend the night at the bottom of a well, sometimes upside down and making them eat their own vomit. 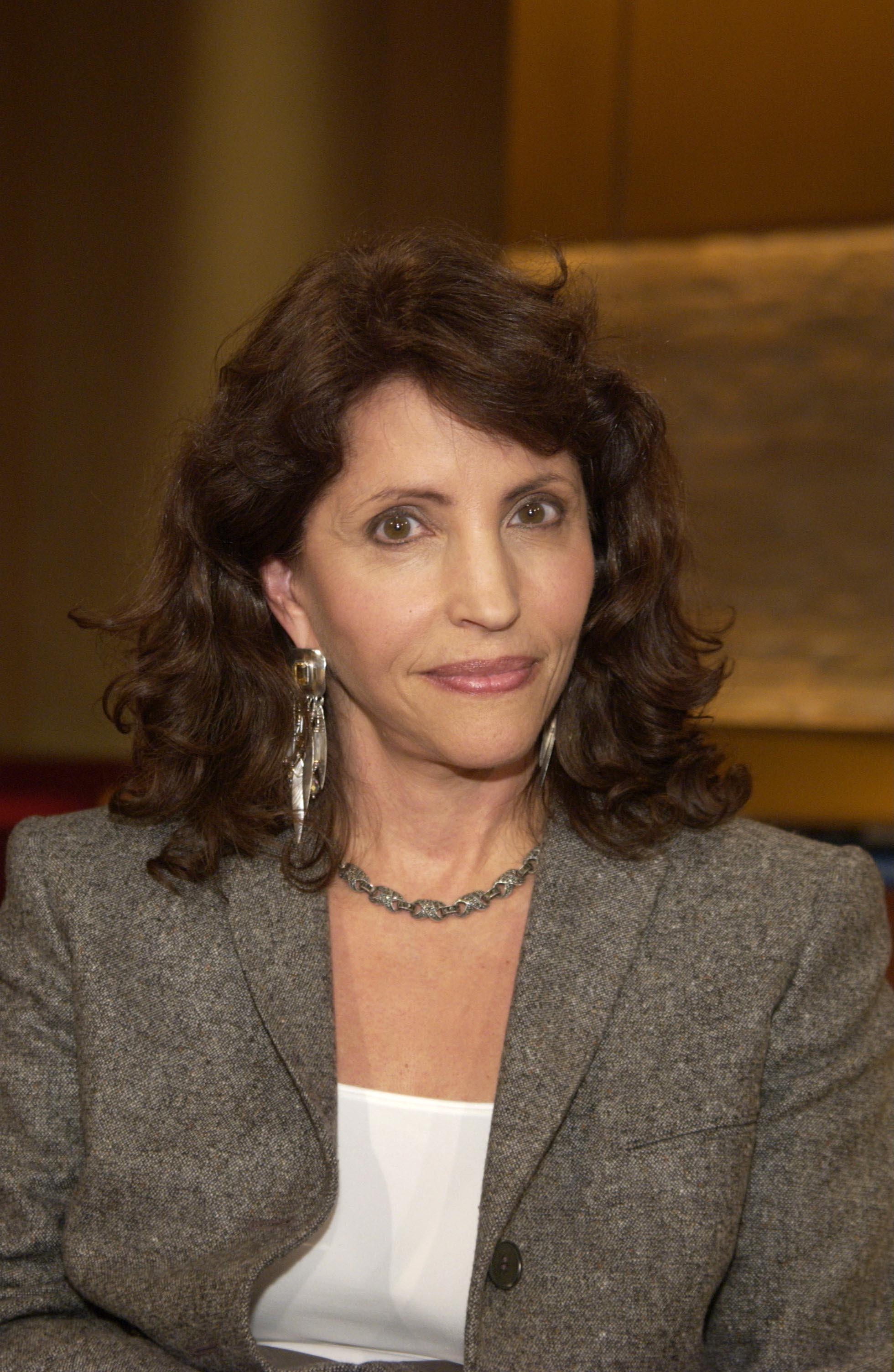 The horror of 'white nights'

Most chillingly, the cult's members were made to attend what Jones described as "white nights", where they rehearsed what he called "revolutionary suicide".

One defector, Deborah Layton, recalled: "Everyone, including the children, was told to line up. As we passed through the line, we were given a small glass of red liquid to drink.

"We were told that the liquid contained poison and that we would die within 45 minutes.

"When the time came when we should have dropped dead, Rev. Jones explained that the poison was not real and that we had just been through a loyalty test.

"He warned us that the time was not far off when it would become necessary for us to die by our own hands." 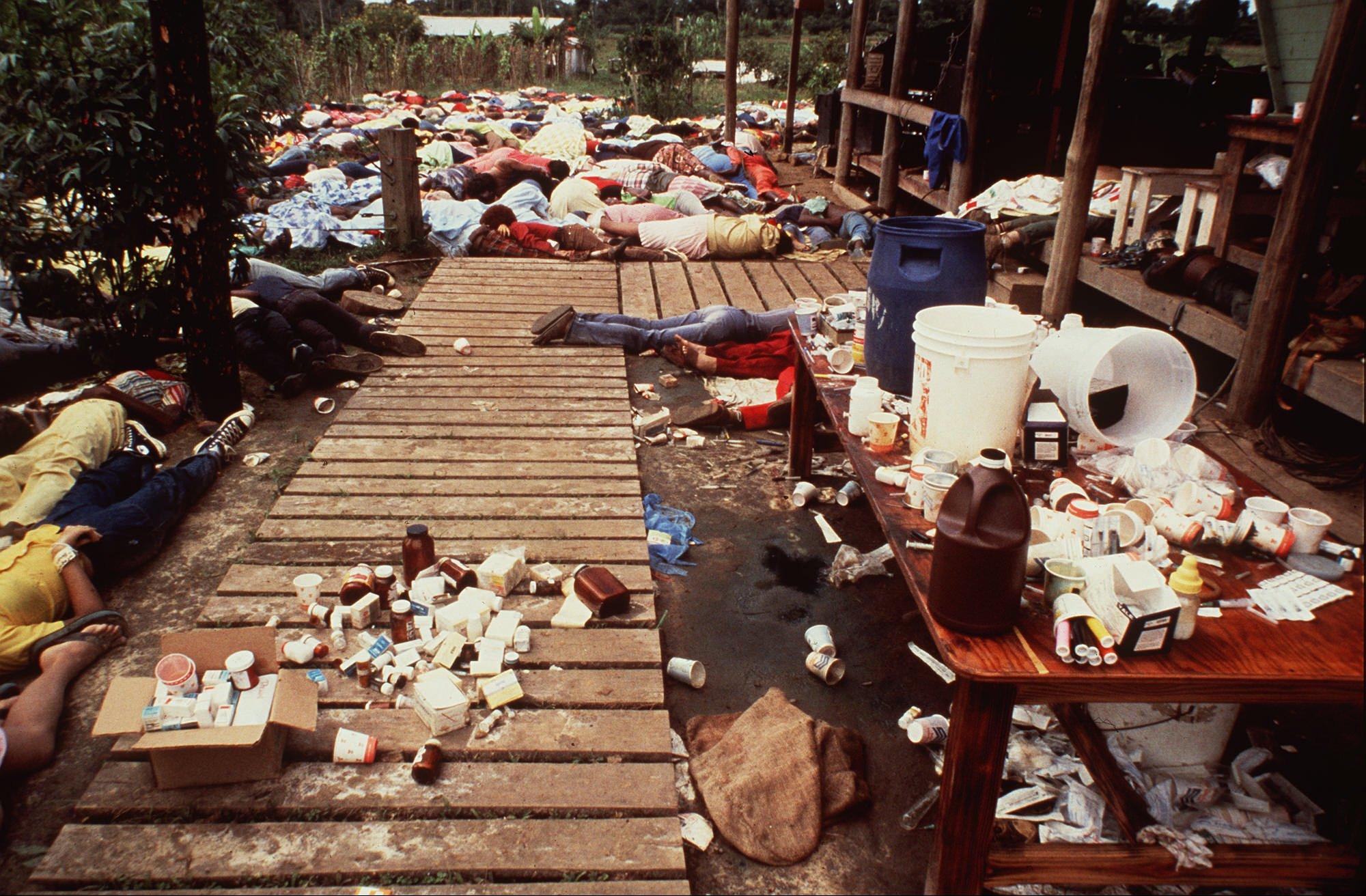 A group, calling themselves Concerned Relatives, contacted the US Goverment as they were worried about loved ones who'd moved to Jonestown.

They believed they were being held against their will in the commune, describing the settlement as a "concentration camp" and claiming that anyone who tried to leave would be killed.

Following this, US politician Leo Ryan decided to investigate, arriving in Jonestown on 17 November.

Initially, he received a warm welcome – but then followers came to him asking for their assistance in leaving the compound, enraging Jones. 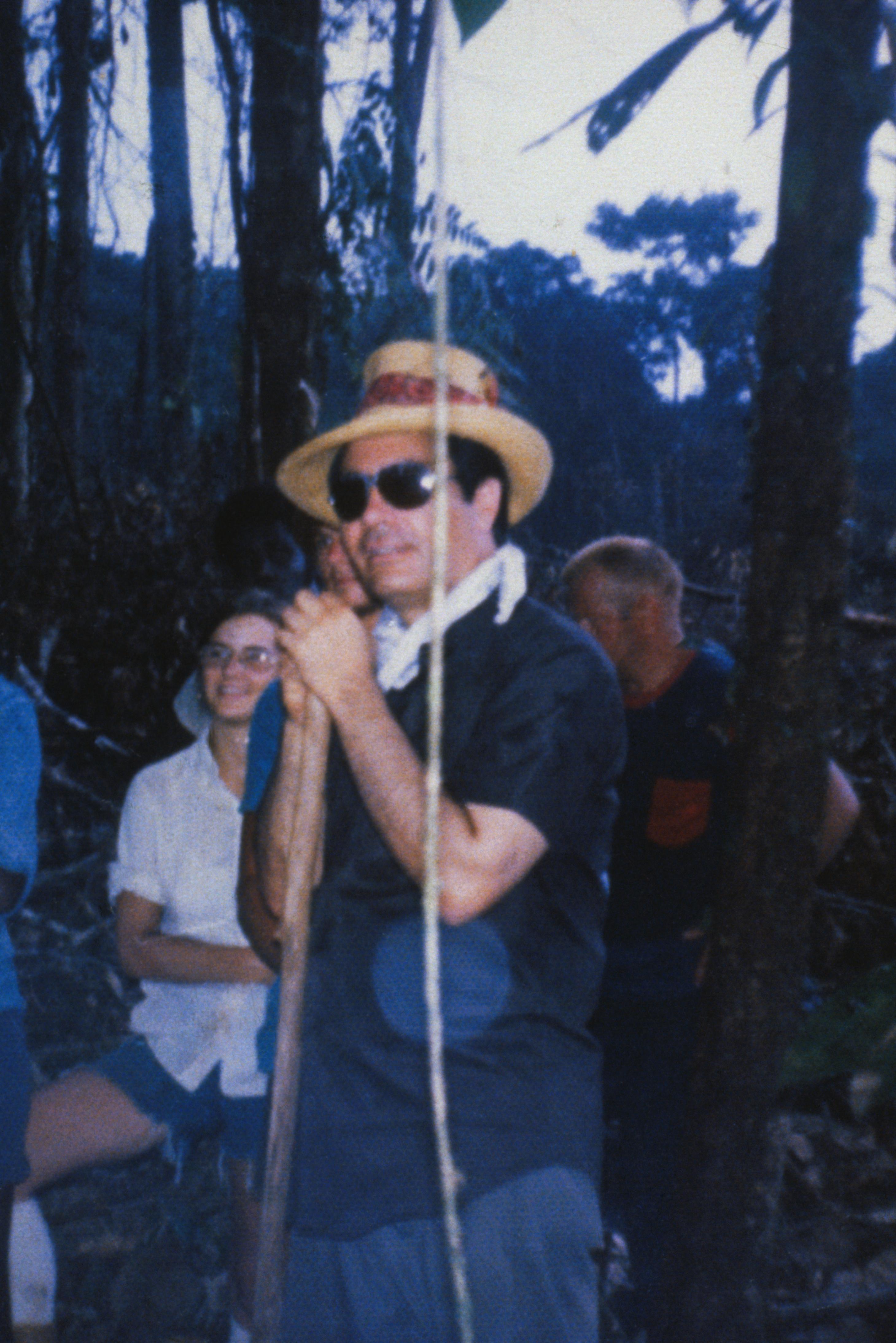 A bus of 14 defectors, who had decided to escape with Ryan – as well as one of Jones's men who posed as a defector – were taken to the airstrip to board planes out of Jonestown.

However, instead Jones's men opened fire on the tarmac, killing Ryan, three journalists that had escorted him on the trip, as well as one of the defectors, and injuring 11 others. 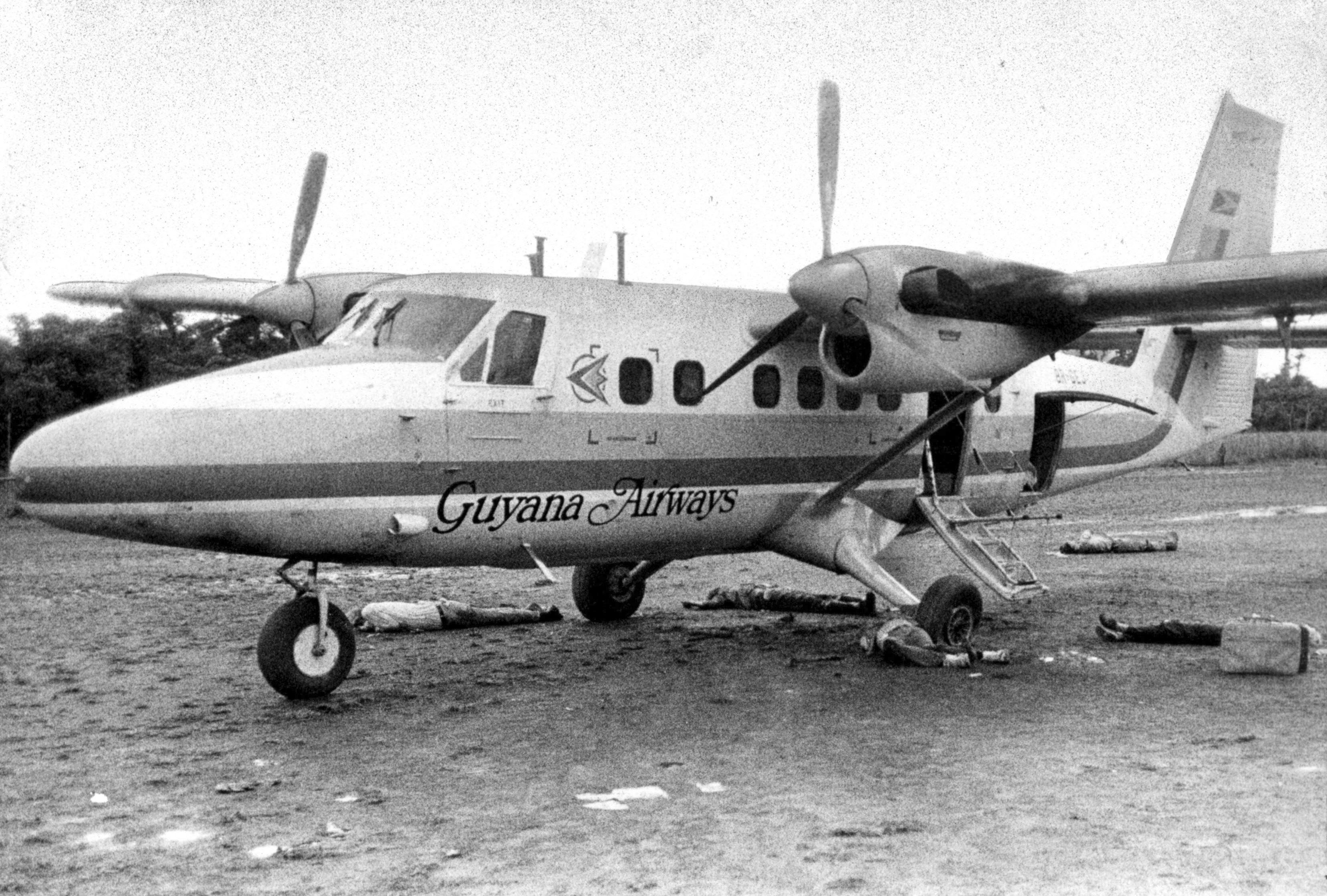 That evening, over the cult's radio station Jones released orders for Peoples Temples members who lived outside the compound to kill themselves.

At the headquarters in Georgetown, Guyana, the bodies of member Sharon Amos and her three children Liane, 21, Christa, 11, and Martin, 10 were found in a bathroom by one of Jones's sons, Stephen.

He was in Georgetown playing basketball at the time, but after hearing his father's instructions he rushed to the US embassy.

Stephen had then gone to the headquarters after armed guards had refused him entry to the embassy following Ryan's shooting.

Police believed Sharon had stabbed Christa and Martin to death, before Liane assisted Sharon in killing herself before stabbing herself to death. 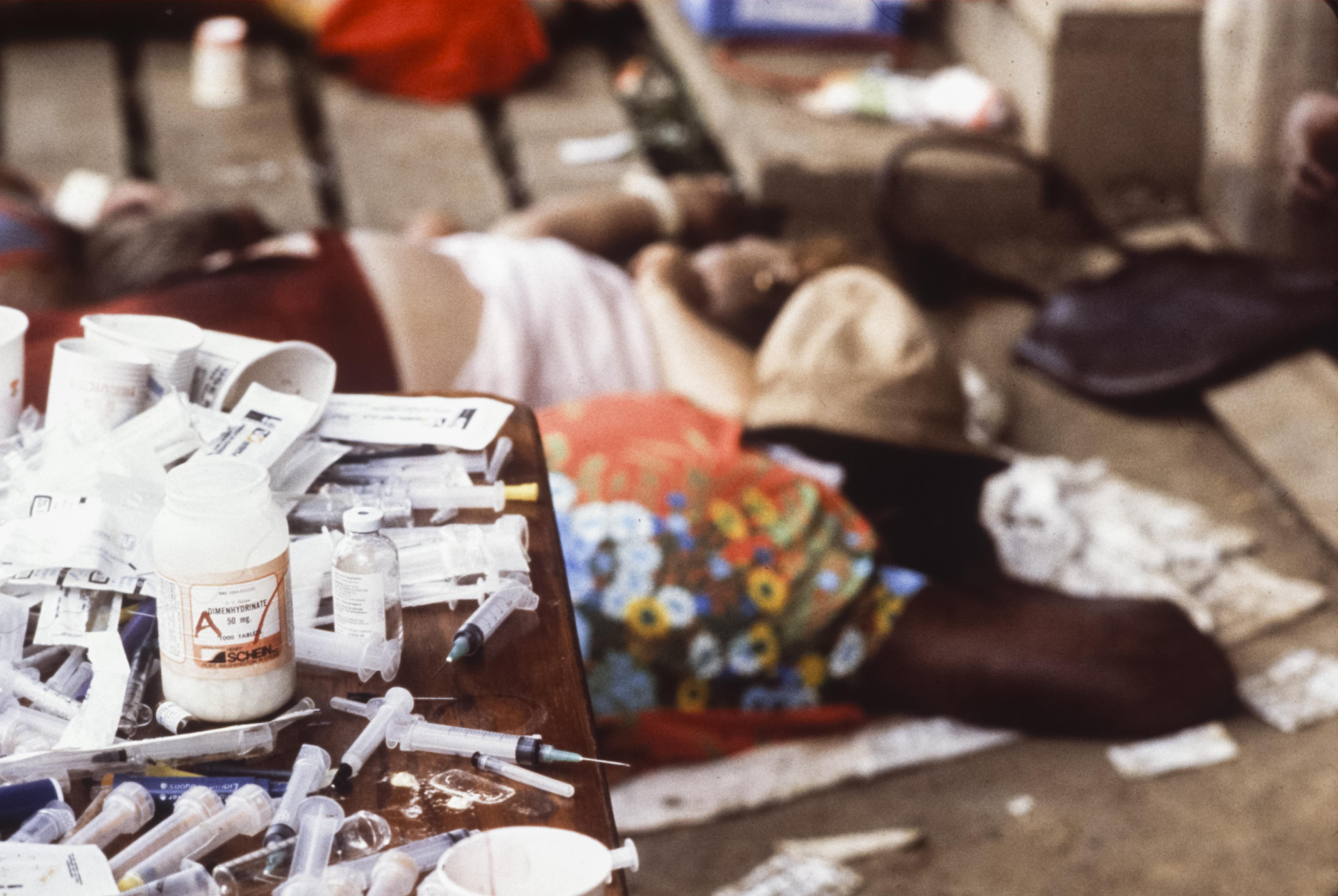 Meanwhile, at Jonestown, Jones gathered everybody together. Chillingly, he called up mothers with babies and small children first, telling them to give their children fruit drink – Kool-Aid – laced with deadly cyanide and tranquillisers from a large metal vat.

He did this so that once the adults saw their youngsters dying they'd be more likely to carry out his orders, as they'd no longer have anything to live for, according to Odell Rhodes, the only follower who managed to escape during the suicide rites.

The brainwashed parents did as they were told, and this later inspired the phrase "don't drink the Kool-Aid", used to describe people who have a belief in something without critical examination.

As the followers cried in pain from the fast-acting poison, Jones reportedly shouted: "Die with a degree of dignity. Don’t lay down with tears and agony! It’s nothing to death, it’s just stepping over into another plane.” He then shot himself after the suicides had taken place. 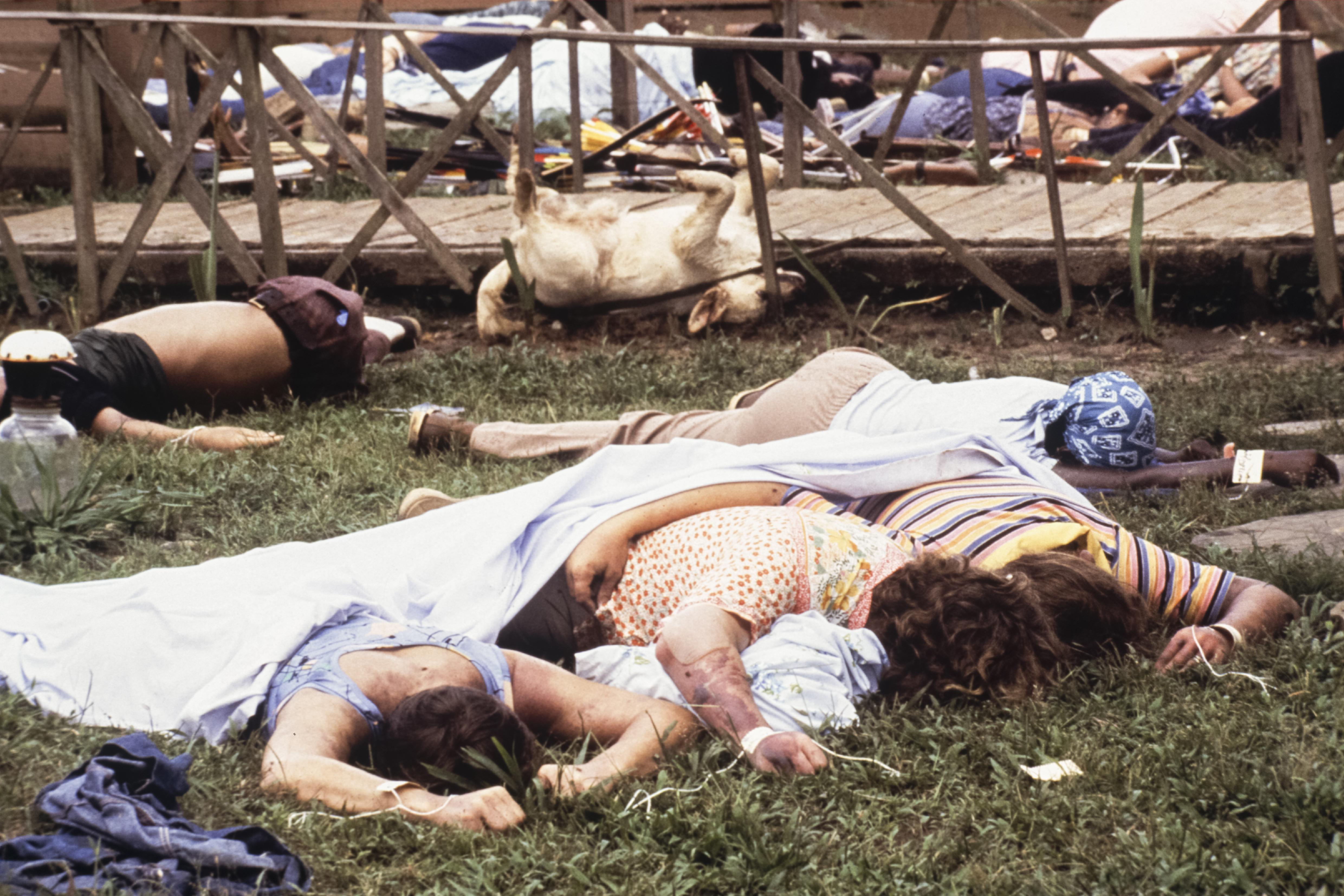 Jones's sons informed the authorities of their father's mass suicide plan – and there were already plans in place to send a government plane to tend to Ryan's parties.

Members of the press went to the compound with the US army, and were shocked at the size of the massacre, with one former NBC News correspondent saying he didn't expect more than a couple of hundreds of bodies.

When the authorities identified the bodies, 70 people had needle marks on their skin. It was thought they'd refused to drink the concoction so were forcibly injected with it instead.

Around 80 temple members survived the massacre – however aside from Rhodes these were either defectors who'd managed to escape before they were told to drink cyanide or those living in Georgetown. 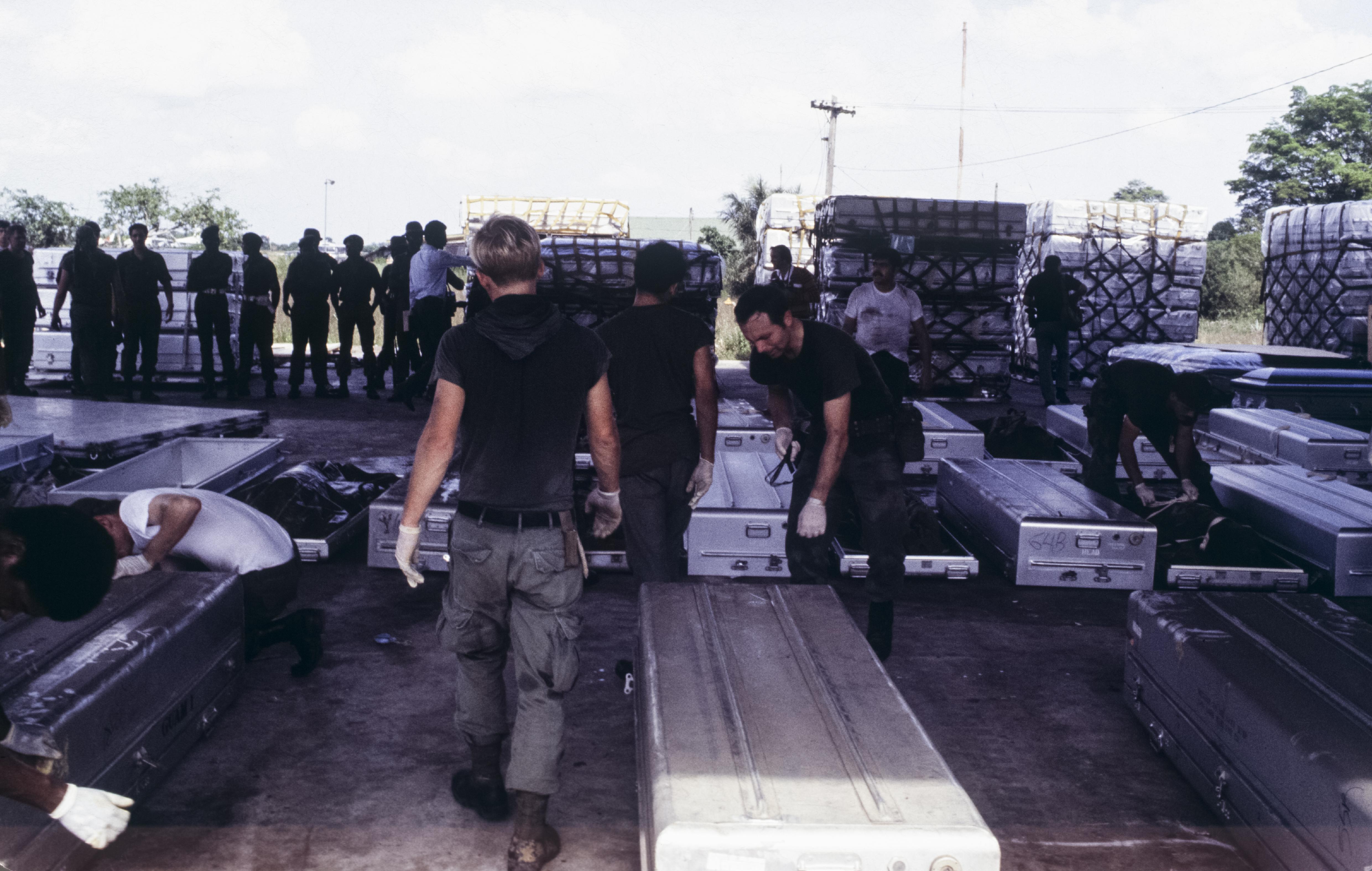 'I've never grieved for my father'

Marceline, Jones' wife, was also poisoned, as well as six of his children. However, Stephan, then 19, Jim Jr, then 18 and Tim Jones, then 19, did not take part in the mass suicide because they were in Georgetown playing in a basketball game.

Stephen, who is now a businessman, was the only biological child of Jones and Marceline, had at first resisted moving to Jonestown in the first place, only eventually relenting as his mother had begged him.

While the other boys were happy to be part of the cult, Stephen, struggled with it.

“My experience with my father was he was more an actor than genuine, almost always. He was always aware of eyes on him,” Stephan said.

“Because all that mattered to my father was his perception of other people's perceptions of him.”

He discovered the Georgetown bodies, and spent three months' being wrongly imprisoned for the deaths in a Guyanese prison. 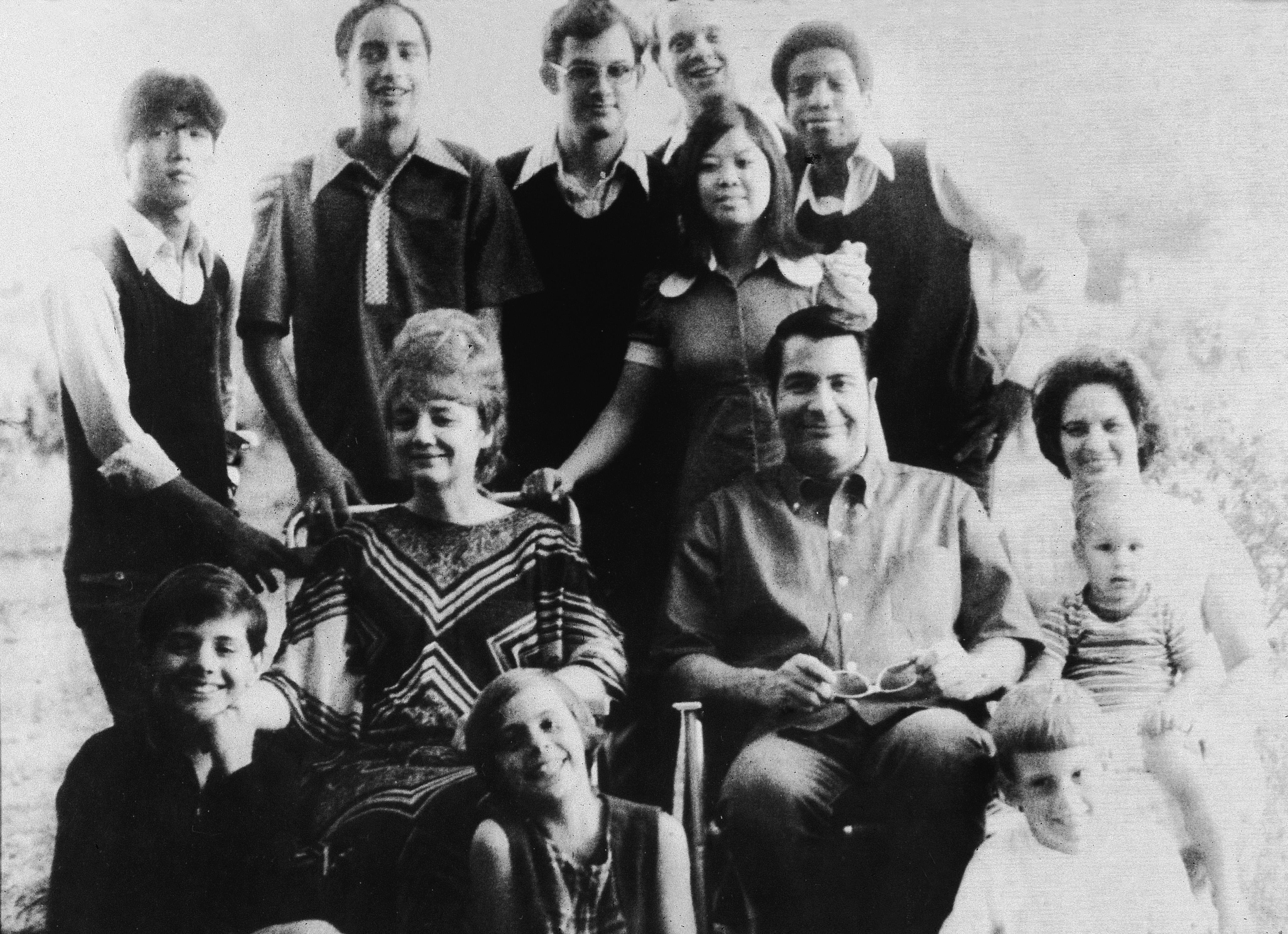 Stephen says he's "never grieved" for his father, and had long tried to convince him not to act on his "revolutionary suicide" plan, something he still feels guilt for.

“There were many times that we probably could have steered things in a different direction. We could have put a stop to what happened long before that final night, and we didn't get it done,” he recently told ABC news.

“For me it was because I was too focused on myself and not enough on my community and what was best for them.

"In much more simpler terms, it's just that I wasn't there when they died."

Forty years on, Stephen has written several essays about the legacy of Jonestown, and says he has since "come to some kind of forgiveness."

“That was the only way I was going to make anything positive out of what happened there. In that gratitude, I am free to now look forward.”

The bodies of over 400 of those who died are buried in a mass-grave at in Oakland, California and in 2011 a memorial to them was erected at the cemetery.

It is a poignant reminder of those who lost their lives on that fateful day.