NAYPYITAW (Reuters) – Myanmar’s top court on Tuesday rejected the appeal of two Reuters reporters sentenced to seven years in jail for breaking the Official Secrets Act, in a landmark case that has raised questions about the country’s transition to democracy.

“They were sentenced for seven years and this decision stands, and the appeal is rejected,” Supreme Court Justice Soe Naing told the court in the capital, Naypyitaw, without elaborating.

Wa Lone, 33, and Kyaw Soe Oo, 29, have spent more than 16 months in detention since they were arrested in December 2017 while working on an investigation into the killing of 10 Rohingya Muslim men and boys.

They are being held at Yangon’s Insein prison and were not present to hear the Supreme Court verdict.

Their wives, who had traveled from Yangon to hear the verdict on Tuesday, emerged from the courtroom quietly wiping away tears.

Panei Mon, Wa Lone’s wife, who gave birth to their first child last year, said she had been “hoping for the best”.

“Our husbands are good people,” she said. “We want them to be released as soon as possible.”

The journalists were found guilty under the Official Secrets Act last September by a district court judge in Myanmar’s largest city, Yangon. They were sentenced to seven years in prison. The Yangon High Court rejected an earlier appeal in January.

Lawyers for the reporters appealed again to the country’s most senior court, the Supreme Court, citing lack of proof of a crime and evidence that the pair were set up by police. A policeman testified last year that officers had planted secret documents on the two reporters.

“Wa Lone and Kyaw Soe Oo did not commit any crime, nor was there any proof that they did,” Reuters Chief Counsel Gail Gove said in a statement on Tuesday.

“Instead, they were victims of a police set-up to silence their truthful reporting. We will continue to do all we can to free them as soon as possible.” 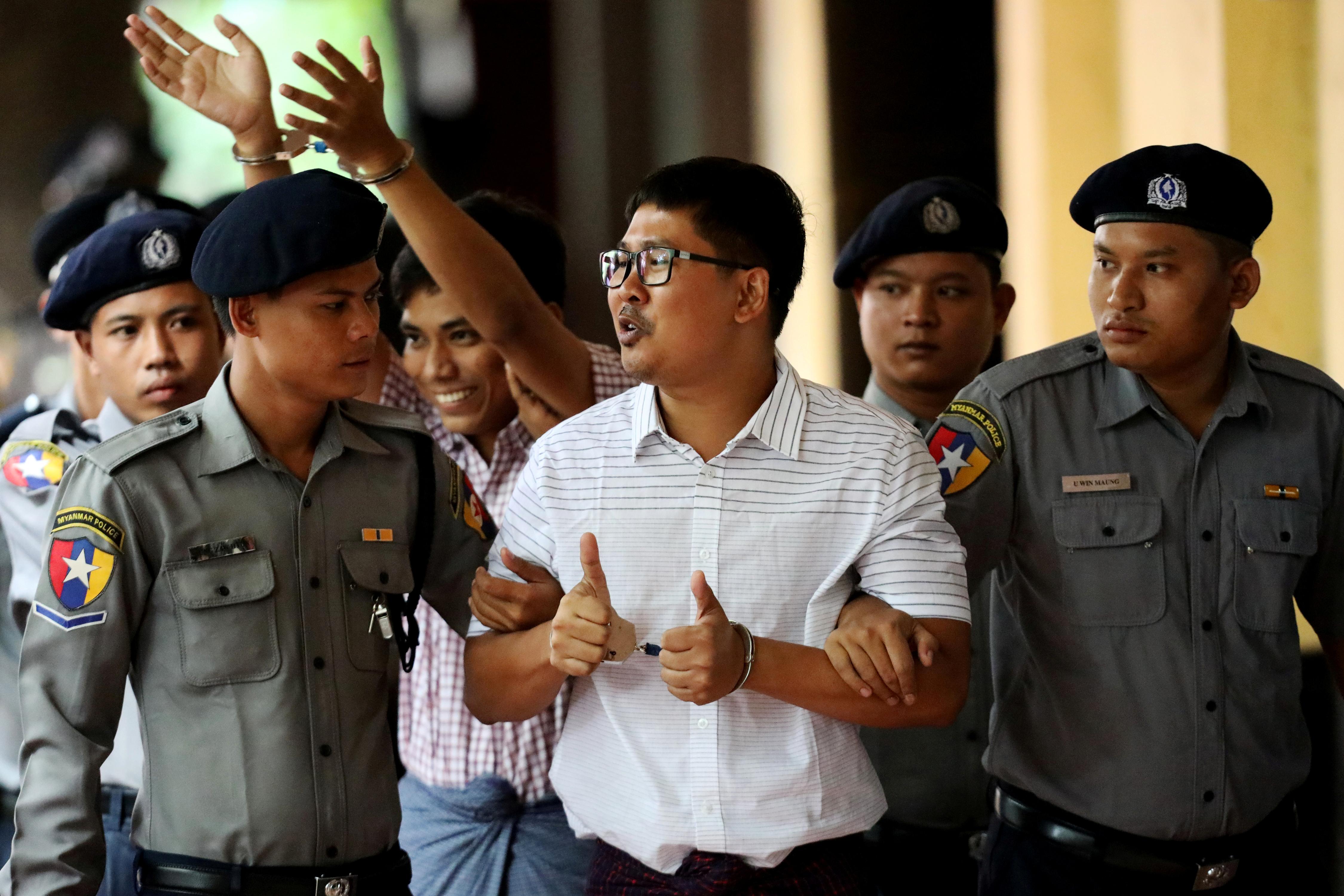 A government spokesman did not answer calls seeking comment.

The reporters’ imprisonment has sparked an outcry from press freedom advocates, Western diplomats, and world leaders, adding to pressure on Myanmar leader Aung San Suu Kyi, the Nobel laureate who took power in 2016 amid a transition to democracy from military rule.

The courtroom on Tuesday was crowded with diplomats and observers as Soe Naing read the brief verdict from a piece of paper, without giving any explanation.

The head of the United Nations in Myanmar, Knut Ostby, said he was disappointed in the judgment.

“The United Nations will continue to call for full respect of freedom of the press and human rights,” he said in a statement. “Wa Lone and Kyaw Soe Oo should be allowed to return to their families and continue their work as journalists.”

The investigation the journalists were working on at the time of their arrest, which uncovered security forces’ involvement in killings, arson and looting, was completed by colleagues and published in 2018. Last week, the coverage was awarded the Pulitzer prize for international reporting.

U.N. investigators have called for high-ranking military officials to be prosecuted for crimes against humanity and genocide over a 2017 crackdown on the Rohingya in response to militant attacks in the western part of the country.

Nicholas Bequelin, Amnesty International’s regional director for East and Southeast Asia, said in a statement after Tuesday’s verdict that Wa Lone and Kyaw Soe Oo were not “isolated cases” and there had been a “disturbing surge” in politically motivated arrests in Myanmar.

He called on the international community to pressure the government to release all prisoners of conscience and amend laws used to curtail freedom of expression. 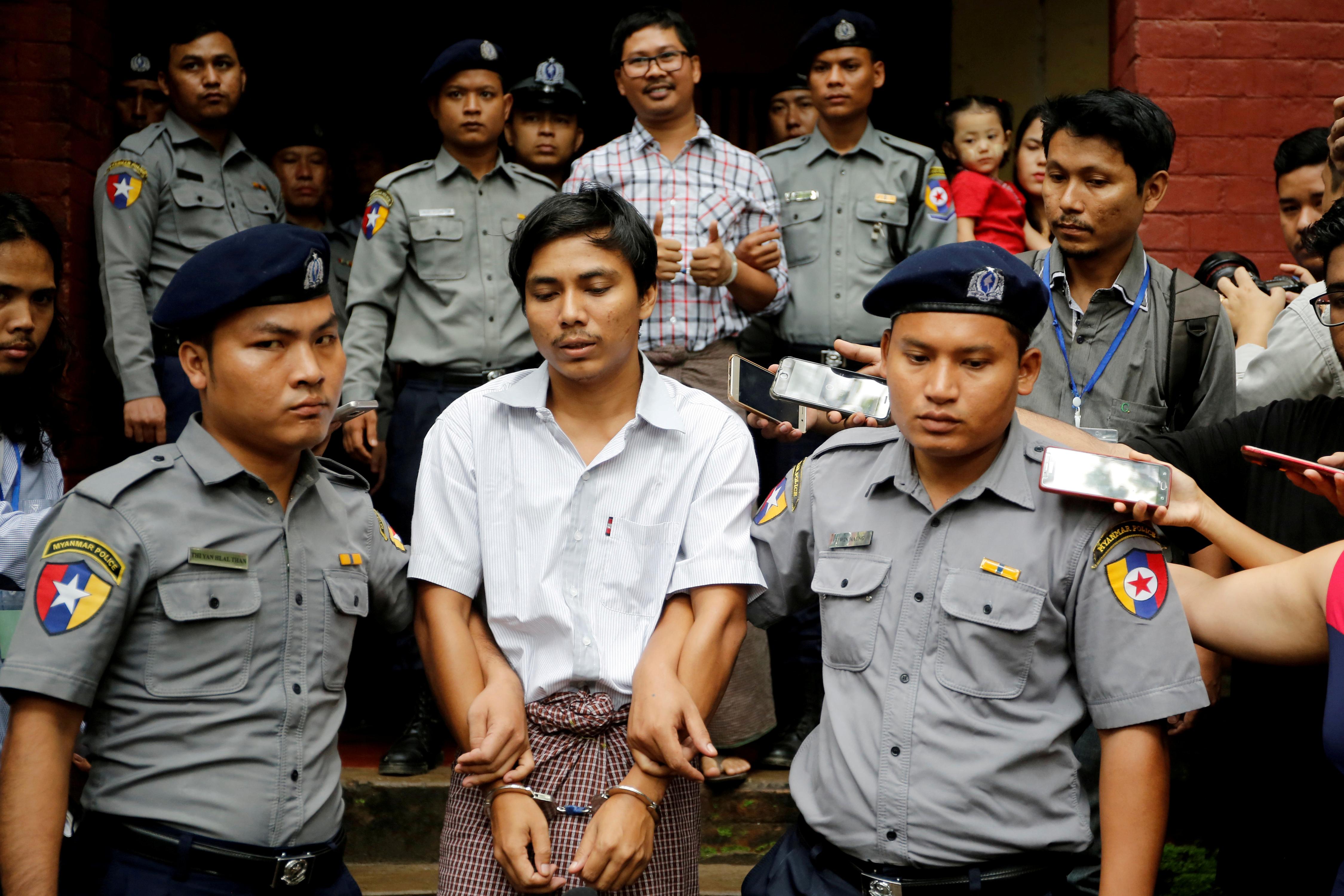 President Win Myint pardoned more than 9,000 prisoners during a mass amnesty to mark the traditional Burmese New Year in mid-April, but rights group the Assistance Association for Political Prisoners said among them were just two of dozens of political prisoners.

Responding to criticism in local media, the country’s prisons department said in a statement on Monday that there were “no political prisoners” in Myanmar.