Sunday’s ballistic missile tests mark the fourth such launch this month as the world battles the coronavirus pandemic. 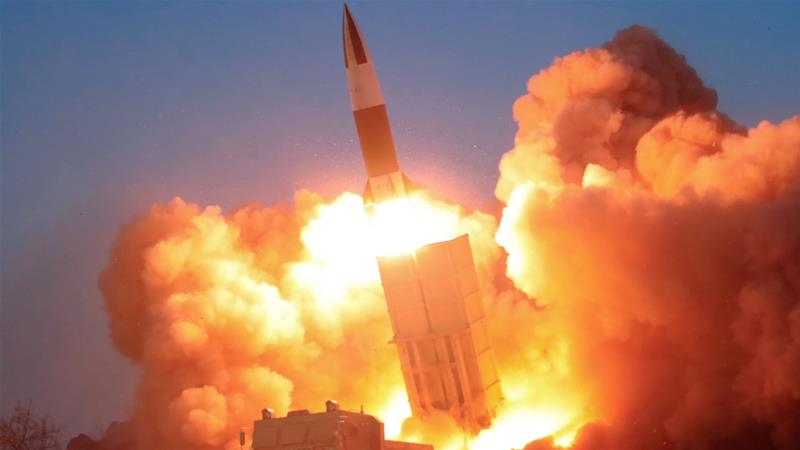 North Korea has fired two suspected ballistic missiles into the ocean off its east coast – according to South Korea and Japan – the latest in a flurry of weapon launches that Seoul decried as “inappropriate” amid the global coronavirus pandemic.

Two “short-range projectiles” were launched from the coastal Wonsan area on Sunday, and flew 230 kilometres (143 miles) at a maximum altitude of 30 kilometres (19 miles), South Korea’s Joint Chiefs of Staff reported.

“In a situation where the entire world is experiencing difficulties due to COVID-19, this kind of military act by North Korea is very inappropriate and we call for an immediate halt,” the JCS said in a statement, according to Yonhap news agency.

Japan’s Ministry of Defense said the projectiles appeared to be ballistic missiles, and they did not land in Japanese territory or its exclusive economic zone.

“Recent repeated firings of ballistic missiles by North Korea is a serious problem to the entire international community including Japan,” a ministry statement said.

Pyongyang is yet to issue a statement on Sunday’s weapons launches.

They would be the eighth and ninth missiles launched in four rounds of tests this month, and the most missiles ever fired in a single month by North Korea, according to a tally by Shea Cotton, senior researcher at the James Martin Center for Nonproliferation Studies.

“Coming this early in the year, the only time we’ve seen tests this frequently were in 2016 and 2017, both of which were huge years for North Korea’s missile program,” he said in a post on Twitter.

All the missiles fired so far this year have been small, short-range weapons, such as the KN-24 fired during the last launch on March 21.

Some experts say the latest launches were likely designed to shore up unity and show that leader Kim Jong Un is in control in the face of US-led sanctions and the global pandemic.

Kim “wants to show he rules in a normal way amid the coronavirus (pandemic) and his latest weapons tests were aimed at rallying unity internally, not launching a threat externally,” Kim Dong-yub, an analyst at Seoul’s Institute for Far Eastern Studies, told The Associated Press. “North Korea doesn’t have time now to spare for staging (external threats).”

North Korea has been engaged in an intense campaign to prevent the spread of the virus that has infected more than 660,000 worldwide.

It has called its campaign a matter of “national existence” but has steadfastly denied there has been a single confirmed case on its soil. Many foreign experts question that claim, warning that an outbreak in North Korea could be dire because of its chronic lack of medical supplies and poor healthcare infrastructure.

A week ago, North Korea said US President Donald Trump sent a personal letter to Kim, seeking to maintain good relations and offering cooperation in fighting the pandemic. A North Korean state media dispatch did not say whether Trump mentioned any of the latest weapon tests by the North.

UN Security Council resolutions bar North Korea from testing ballistic missiles, and the country has been heavily sanctioned over its missile and nuclear weapons programmes.

In the past, North Korea has typically conducted military drills, including tests of its ballistic missiles, in March as the winter weather turns warmer. For the previous two years, however, it had avoided such springtime launches amid denuclearisation talks with the US.

Those talks have since stalled after Trump turned down Kim’s calls for broad sanctions relief in exchange for a limited denuclearisation step during their second summit in Vietnam in early 2019.

Pyongyang set a unilateral deadline for Washington to offer fresh concessions by the end of 2019, and in late December last year, Kim declared his country no longer considered itself bound by moratoriums on nuclear and intercontinental ballistic missile tests.