Prominent business owner and influencer Nadia Bartel has avoided conviction after admitting driving without a licence, telling a court she was not aware of a suspension letter sent to the home she shared with her ex-husband, the former AFL star Jimmy Bartel.

Ms Bartel appeared via video link, dressed in a green bomber jacket, for a short hearing in Melbourne Magistrates Court on Wednesday, pleading guilty to driving while suspended and failing to change her address. She was fined $1100. 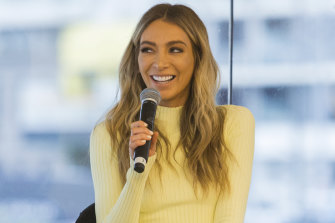 Her black Range Rover was then stopped by police on Dandenong Road in Windsor about 12.30pm on August 25 last year.

“A roadside interview was conducted during which the accused stated she didn’t know she was suspended,” Mr Needham told magistrate Hayley Bate.

Ms Bartel’s lawyer, Sarah Pratt, said her client was unaware her licence had been suspended because the letters were sent to her former husband’s home, and she did not receive the notice.

“It was in the course of a marriage separation and there was two premises. Unfortunately, she didn’t receive the previous letter that went to the marital address,” Ms Pratt said. “Had she known that she was suspended, she certainly wouldn’t drive and she made admissions and was very embarrassed at the time when she was intercepted.

“I can indicate that becoming aware that she was suspended, she immediately relied on Ubers when she didn’t have the children and on her father and a mother who had car seats for the children otherwise, and she obviously didn’t drive.”

Ms Bate agreed that a fine was the most appropriate sentence for Ms Bartel, given her remorse and her role as primary carer for her two school-aged children.

Ms Bartel previously avoided charges over suspected drug use during a party while the city was in lockdown, after police said they had “not detected” any offence by the influencer. 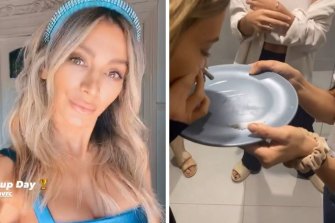 A video of Nadia Bartel snorting white powder was uploaded to Instagram.

The 36-year-old assisted police with their investigation into a video of her purportedly breaching COVID-19 restrictions last September and allegedly taking an illegal drug.

The footage, which was accidentally posted on social media by her business partner Ellie Pearson, showed Ms Bartel sniffing white powder from a plate while surrounded by a group of friends.

“Victoria Police has completed its investigation into possible drug use at an illegal gathering in Richmond on Thursday, September 2. No offence was detected,” police said in a statement issued on Wednesday. “Four people were each fined $5462 for attending the illegal gathering and the case is now closed.”