Napoleon’s bicorne hat which was plucked off the floor after he fled defeat at the Battle of Waterloo is sold for £245,000… after only being expected to fetch £35,000

Napoleon’s military hat which dropped on to the battlefield as he fled defeat at the Battle of Waterloo in 1815 has been sold at auction.

The De Baecque auction house was at the centre of a lively fight today as the hat was expected to fetch less than €40,000.

But there was huge appetite for the historical hat after it was released from a private individual who bought it in 1986.

The hat is one of 120 bicorne hats that Napoleon is believed to have worn during his lifetime. Only 19 of the hats are still in existence, according to De Baecque.

‘There were always 12 hats in service, each of them having a life of three years; they were renewed at the rate of four a year,’ the auction house said. 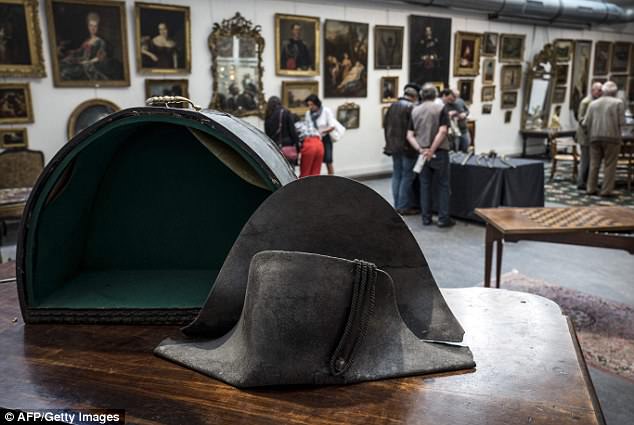 This hat which sold for £245,000 would have been collected, after the battle of Waterloo and the escape of Napoleon, by the captain of Dragons, the baron Arnout Jacques van Zuijlen van Nijevelt 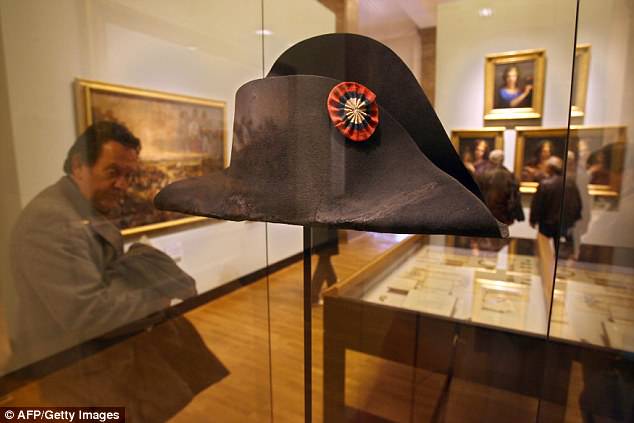 French Emperor Napoleon’s hat, captured by Prussian soldiers at Waterloo in 1815, was on display at the German Historical Museum

Monday’s sale came 203 years to the day since the battle in which the former French emperor was defeated by two of the armies of the Seventh Coalition: a British-led Allied army under the command of the Duke of Wellington, and a Prussian army.

After Napoleon fled the battlefield, the hat was collected by Dutch Dragoon captain Baron Arnout Jacques van Zuijlen van Nijevelt, according to the auction house.

In recent years there has been a relentless appetite for Napoleon’s belongings – especially the bicorne hats which he wore sideways so troops would recognise him on the battlefield, historians say.

Napoleon refused to pay for than 49 francs for his hats according to some historians, although they were priced at 60 francs at Poupart & Cie company, located in what is now known as the Palais-Royal in Paris.

This is the equivalent of around £3,600 today after inflation. 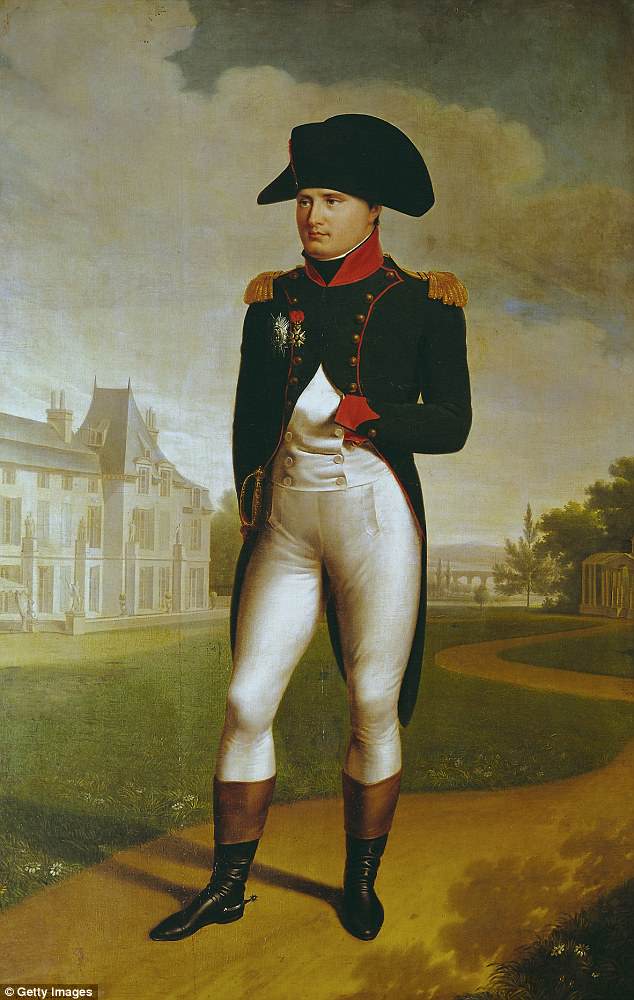 Napoleon Bonaparte at Malmaison in 1804. The image is held in the Musee National du Chateau, Rueil-Malmaison, France 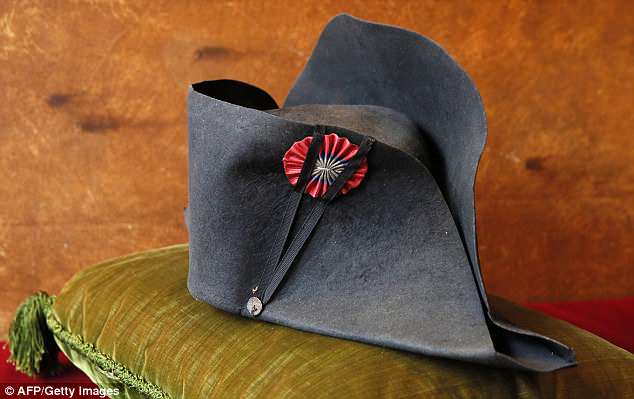 The bicorne: Napoleon is said to have worn more than 120 hats during his time a Emperor 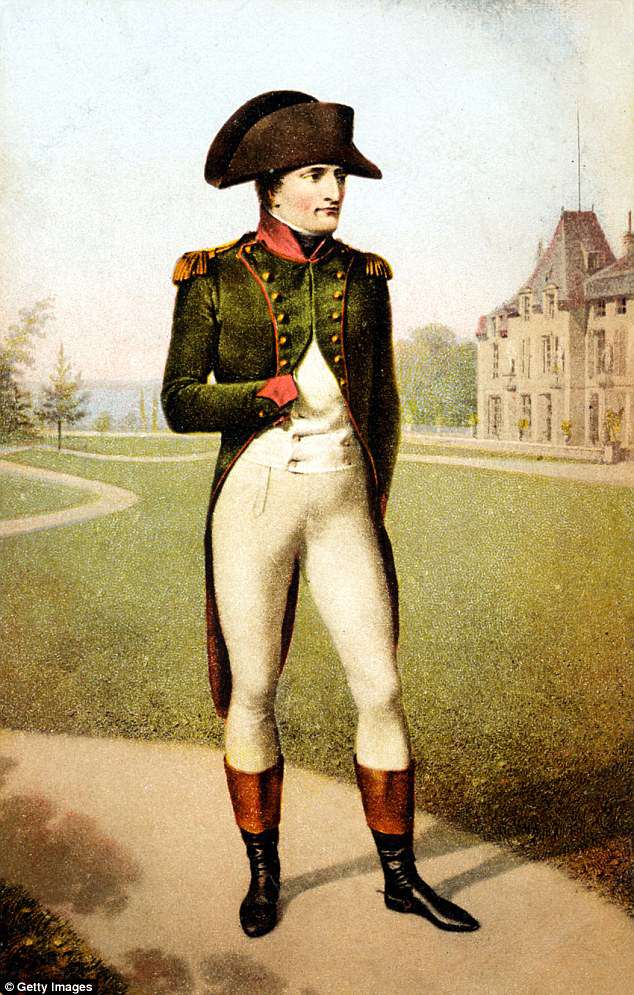 Napoléon Bonaparte, a standing portrait by Isabey. Napoleon was the self-declared Emperor of the French between 1769 and 1821

In 2015 a hat belonging to Napoleon which showed the marks from a musket ball after it was shot at in battle went to auction for £500,000.

The iconic bicorne hat was originally owned by British aristocrat Sir Michael Shaw Stewart, who snapped it up for 10 thalers, equivalent to just £2, or £150 in today’s money.

Napoleon is believed to have made valets wear his hats to break them in – and used 12 every three years.

The hat worn by Napoleon Bonaparte during one of his greatest ever military victories today sold for a record breaking £1.5million four years ago. 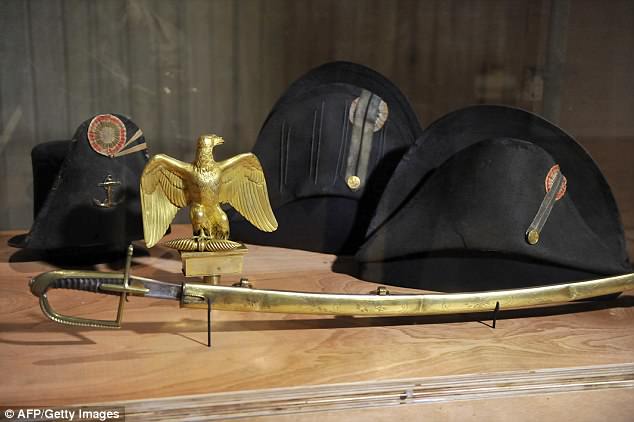 Napoleon’s hats: An eagle statuette and a sword, all from the Napoleonic era, are exhibited in a showcase at the MAS Museum on March 21, 2013 in Antwerp. 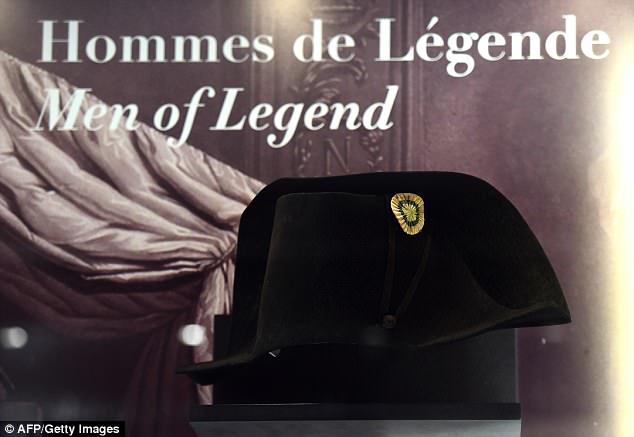 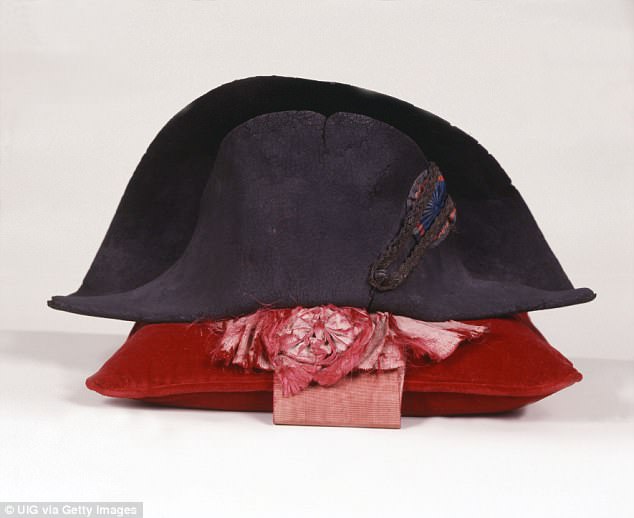 This hat was given to General Mouton in May 1809, after his brilliant victory at the battle of Essling. Each hat was priced at 60 francs, but Napoleon refused to pay more than 49 francs for each of them 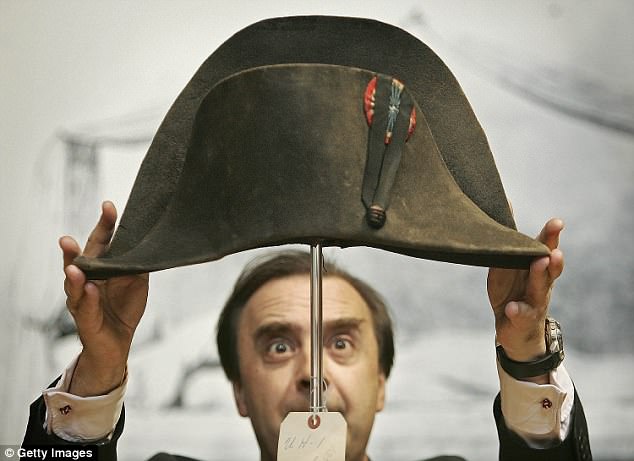 One of Napoleon’s hats was sold for £1.5million after he wore it at the Battle of Marengo in 1800

An anonymous South Korean paid the enormous sum for the black felt bicorne which the French leader wore at the Battle of Marengo in 1800.

Napoleon was at the height of his military powers, and crushed Austrian forces, driving them out of Italy.

The hat was previously owned by Monaco’s royal family

Last November, a gold laurel leaf from the crown made for Napoleon’s coronation was sold for €625,000.

Napoleon declared himself emperor in 1804 and waged war across the European continent before his final defeat in 1815.