‘Not sure if I’m more excited about the landing or this dope ass handshake’: NASA workers mark Mars landing with hilarious celebration

After a 458-million-kilometer (300-million-mile) journey lasting seven months, NASA successfully landed their newest probe on Mars yesterday, to the delight of its employees.

The moment the $993 million unmanned lander, named InSight, touched down on the red planet on Monday afternoon, celebrations began across the globe – but one in particular has captivated audiences.

Two NASA mission controllers who worked on the InSight immediately began a complicated, elaborate handshake that has gone viral. 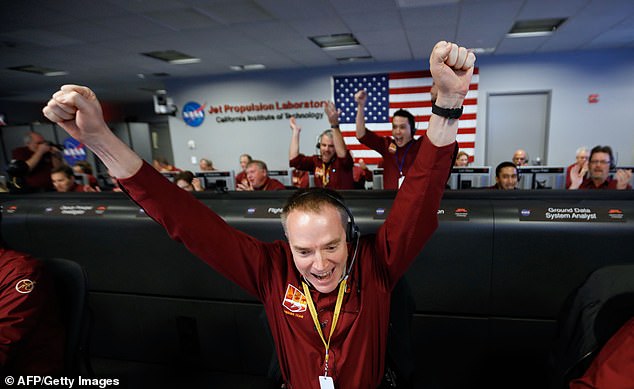 NASA engineer Kris Bruvold celebrates the successful landing by the InSight spacecraft in the Space Flight Operations facility at the NASA Jet Propulsion Laboratory (JPL) in Pasadena, California on November 26, 2018 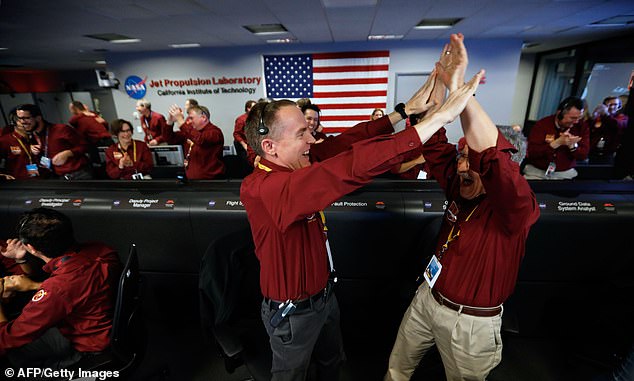 Cheers and applause erupted at NASA’s Jet Propulsion Laboratory as a $993 million unmanned lander, called InSight, touched down on the Red Planet and managed to send back its first picture 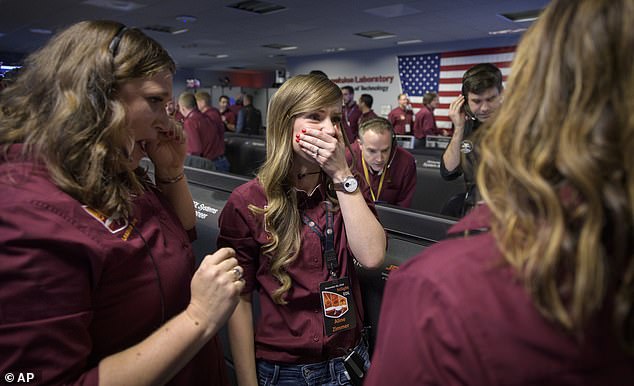 NASA employees react after hearing the good news – InSight, short for Interior Exploration using Seismic Investigations, Geodesy and Heat Transport, has sucessfully arrived on Mars to study the ‘inner space’ of the red planet: its crust, mantle, and core.

Twitter users were marveling at the number of moves in the handshake, with one user commenting that it required ‘NASA-level coordination’, and another questioning how many times they had to practice it to make it perfect.

The probe will collect information relating to how Mars and other celestial bodies with rocky surfaces, such as the Earth and the Moon, formed.

InSight launched from Vandenberg Air Force Base in California on May 5 and landed yesterday at around 12 noon PST, near Mars’ equator. 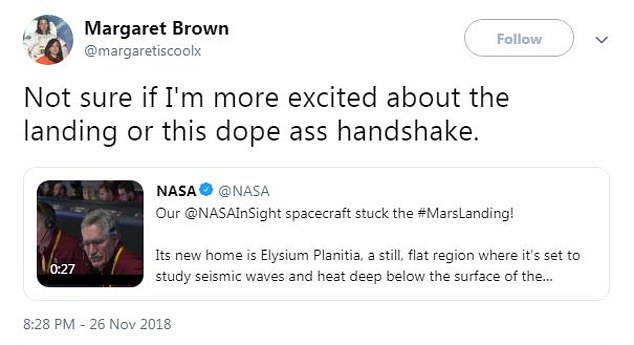 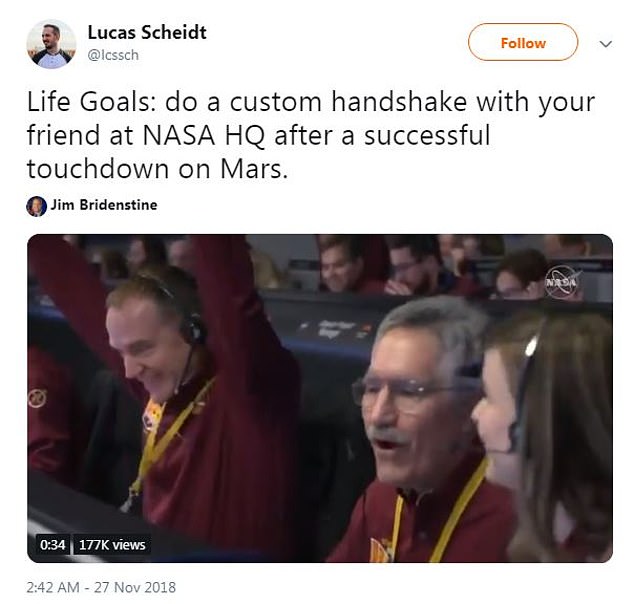 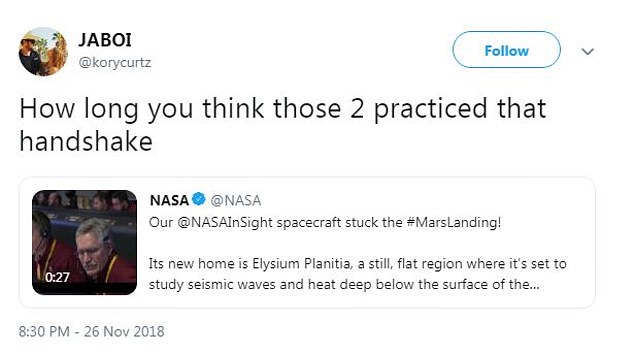 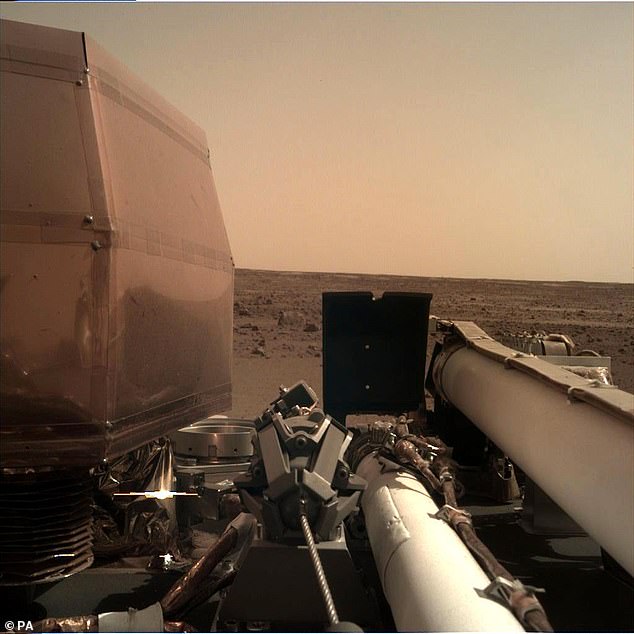 The surface of Mars taken by the Instrument Deployment Camera (IDC), located on the robotic arm of NASA’s InSight lander, taken on the day the spacecraft touched down on the Red Planet 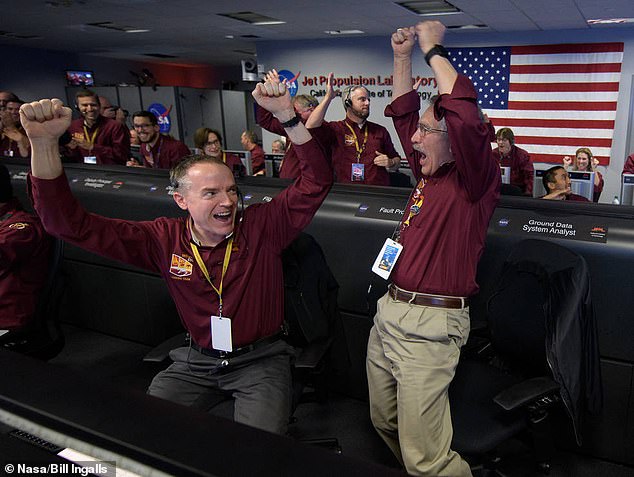 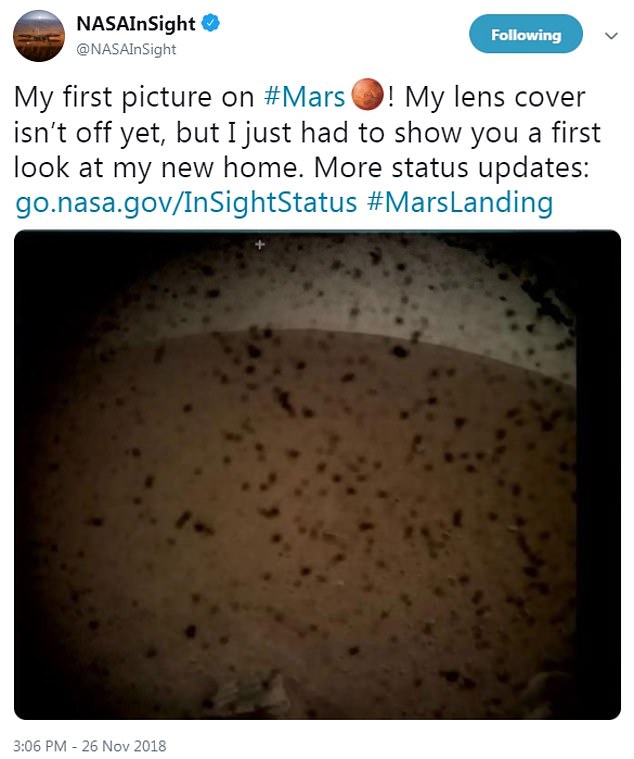 ‘Today, we successfully landed on Mars for the eighth time in human history,’ NASA Administrator Jim Bridenstine said in a statement.

‘InSight will study the interior of Mars, and will teach us valuable science as we prepare to send astronauts to the Moon and later to Mars.

‘This accomplishment represents the ingenuity of America and our international partners and it serves as a testament to the dedication and perseverance of our team. The best of NASA is yet to come, and it is coming soon.’