From images of war-torn Syria to stampeding wildebeest, the National Geographic Photo Contest winner’s photos have shown the world in all its incredible glory.

While the images are stunning, many of them are sure to make people stand back and assess the damage which is being done upon the planet, whether that be two de-horned rhinos, mutilated in order to protect them from poachers, drinking at a waterhole, or a road running through Syria which show the true devastation of the war.

The people category is also home to beautiful images of everyday life, including a picture of a man in his Sunday best and a heart-warming photo of baby enjoying a bath in a rubber duck inflatable.

The places category includes great scenic shots, while the wildlife category includes a wonderful shot of oxen running through deep snow. The winning images were selected from nearly 10,000 entries, and winners took home between £580 and £3900 in prize money. 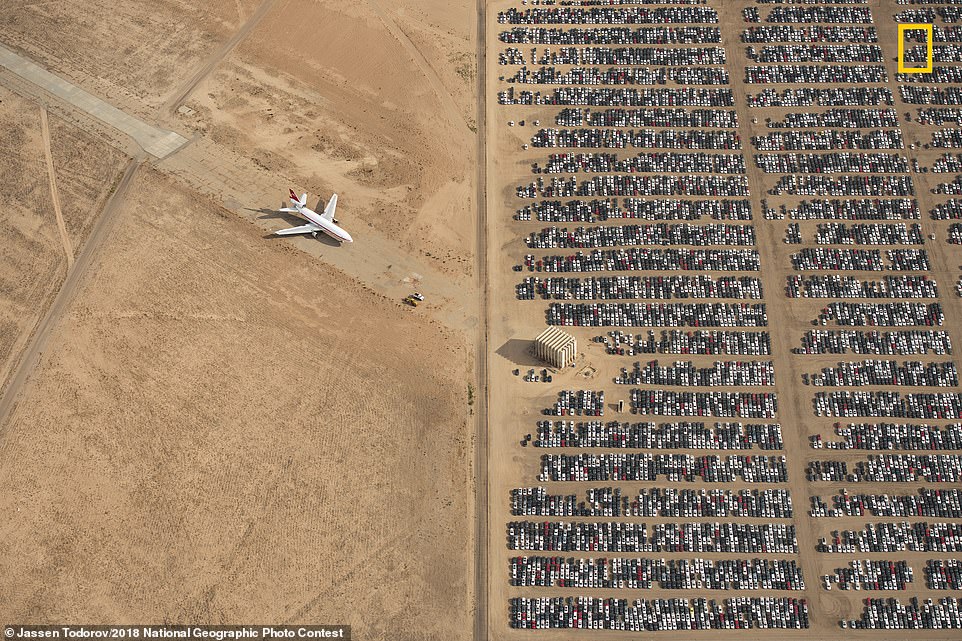 This year’s winning photo was from pilot Jassen Todorov. Flying high above the dessert he captured breathtaking scale and won the grand prize 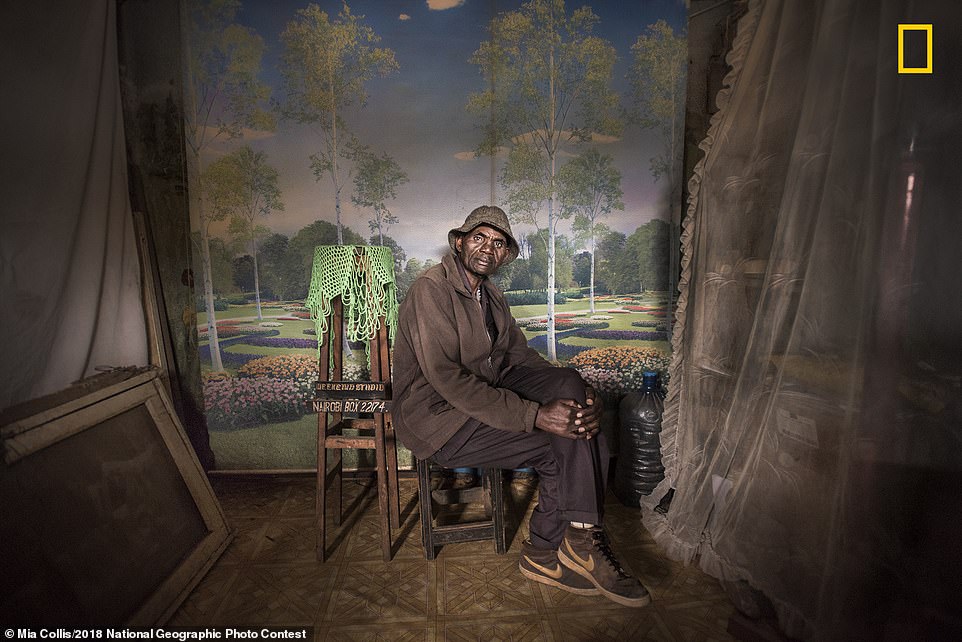 In the people category Mia Collis won first place for this photo. The photo ‘Sunday best’ was taken as Mia was looking to do a series of portraits showing people wearing their Sunday, when she made this photo of David Muyochokera on his last day working at his studio in Kibera, Nairobi 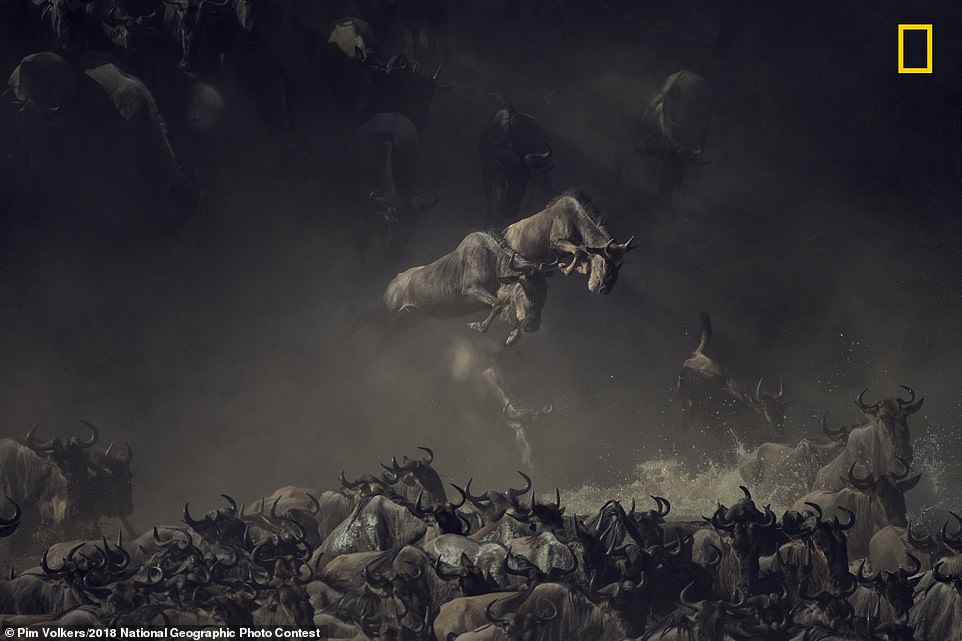 Wildlife first place went to Pim Volkers for this stunning image. The photo is of of wildebeest crossing the Mara River in Tanzania

This year’s winning photo was from pilot Jassen Todorov. The pilot was flying over Apple Valley in California on a hot day in May when he snapped the winning image.

Todorov is a concert violinist by trade and had decided to fly over the area after he had read news that recalled vehicles were being house at the Southern California Logistics airport.

He said he was struck by the scale of the story and therefore had wanted to see the scene for himself. 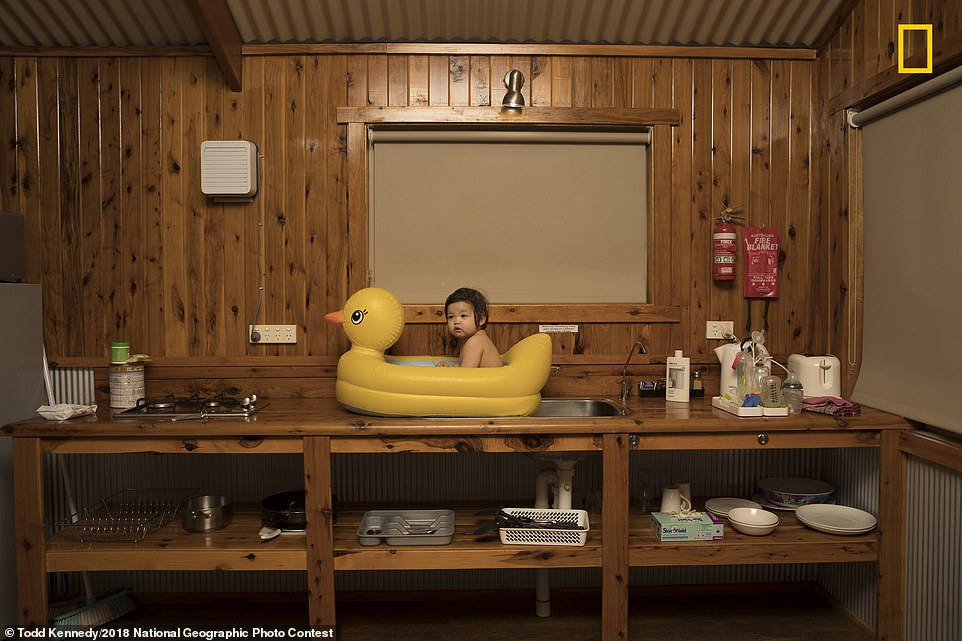 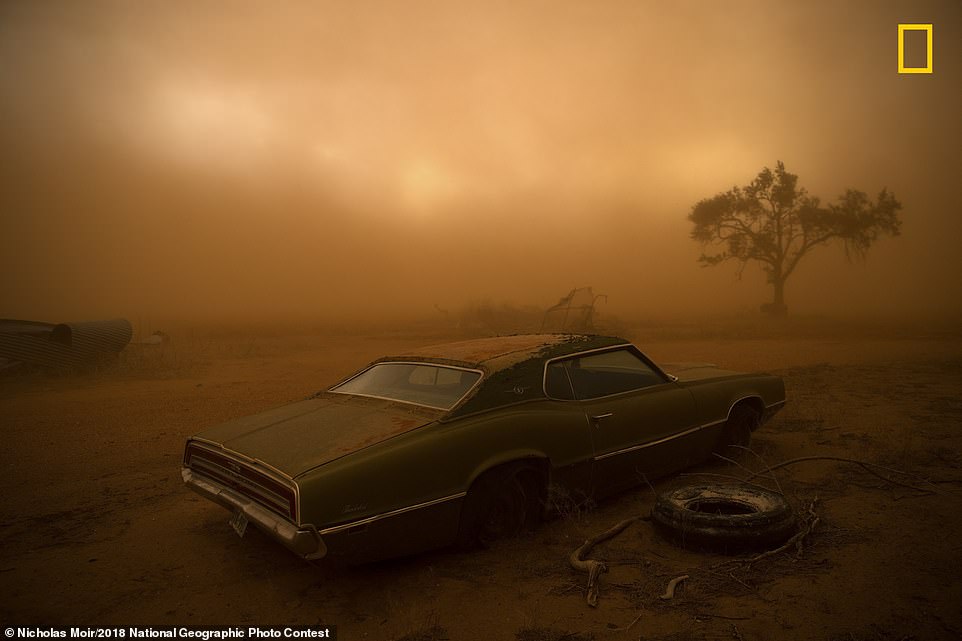 Thunderbird in the dust: Nicholas Moir came second in the places category for this photo of a rusting Ford Thunderbird being blanketed by red dust from a supercell thunderstorm in Ralls, Texas

Another notable image was ‘Sunday best’ by Mia Collis. The photo scooped first prize in the people category.

Mia said she had been looking to do a series or portraits showing people wearing their Sunday best when she snapped the photo of David Muyochokera on his last Sunday working as a photographer at Weekend Studio in Kenya.

Weekend Studio was about to close permanently and Mr Muyochokera had planned to retired and return home to the countryside. Mia said she had been troubled by the closure of the studio and had taken on the rent for the space. A portrait of David now hangs at Weekend Studio in his memory. 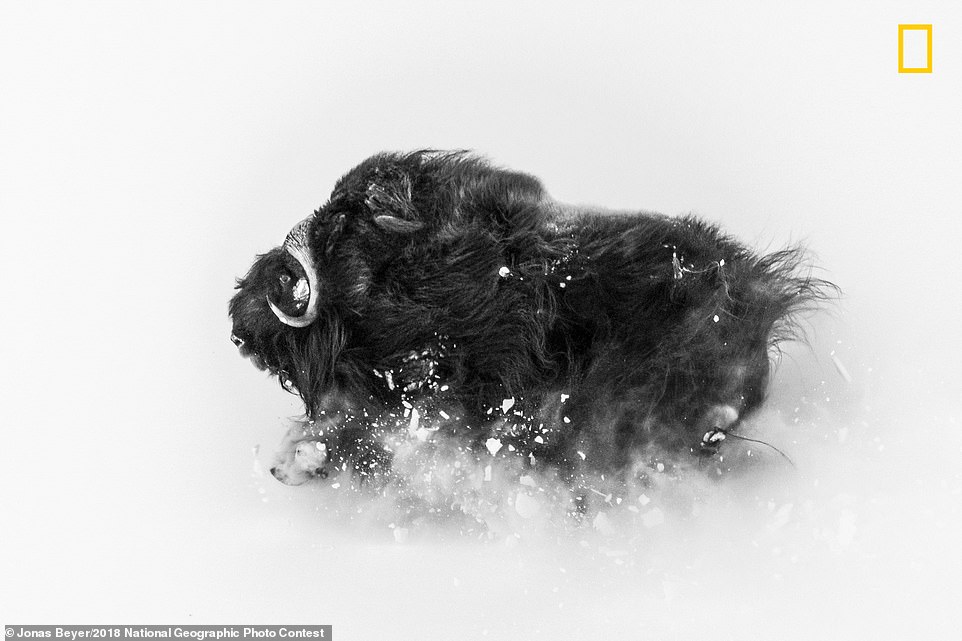 Deep snow: Jonas Beyer won second place in the wildlife category for this shot of an ox running on a hillside in deep snow in Greenland 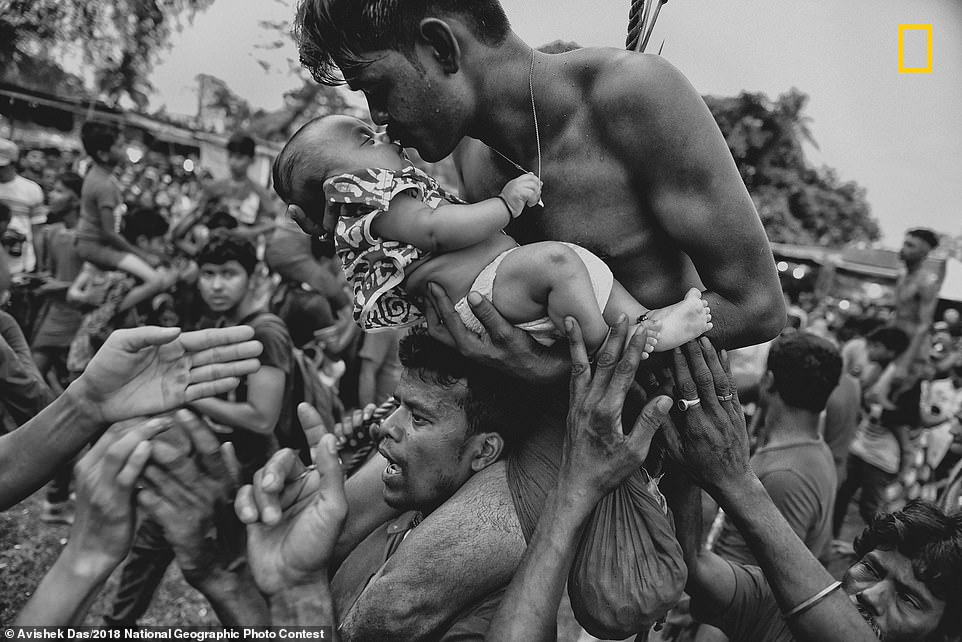 Avishek Das won third place in the people category for this photo of a Hindu devotee kissing his newborn baby during the Charak Puja festival in West Bengal, India 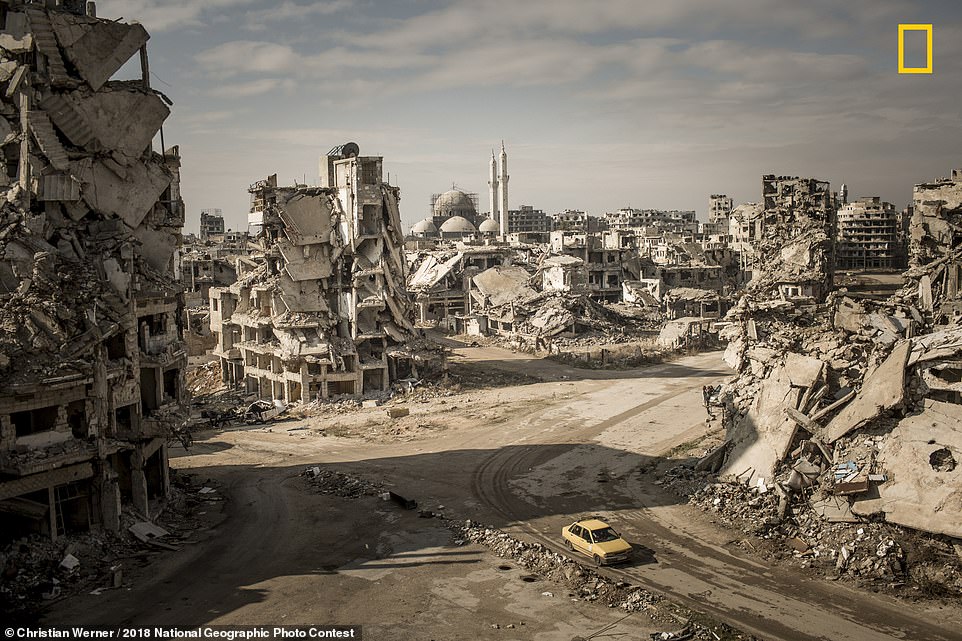 Road to ruin: Christian Werner scooped third place in the places category for this image of his road trip through Syria

One of the more sobering photos to have won a prize was Christian Werner’s photo of his road trip through Syria. He won third place in the places category for the photo.

While on assignment for Der Spiegel, Werner made a road trip through Syria in order to document the situation in major cities across the country. He said he had been shocked when he first entered the Khalidiya district in Homs as he hadn’t seen such large-scale destruction before.

In order to take the image he had climbed up the ruins of a former house which had been full of improvised explosive devices and took the picture. 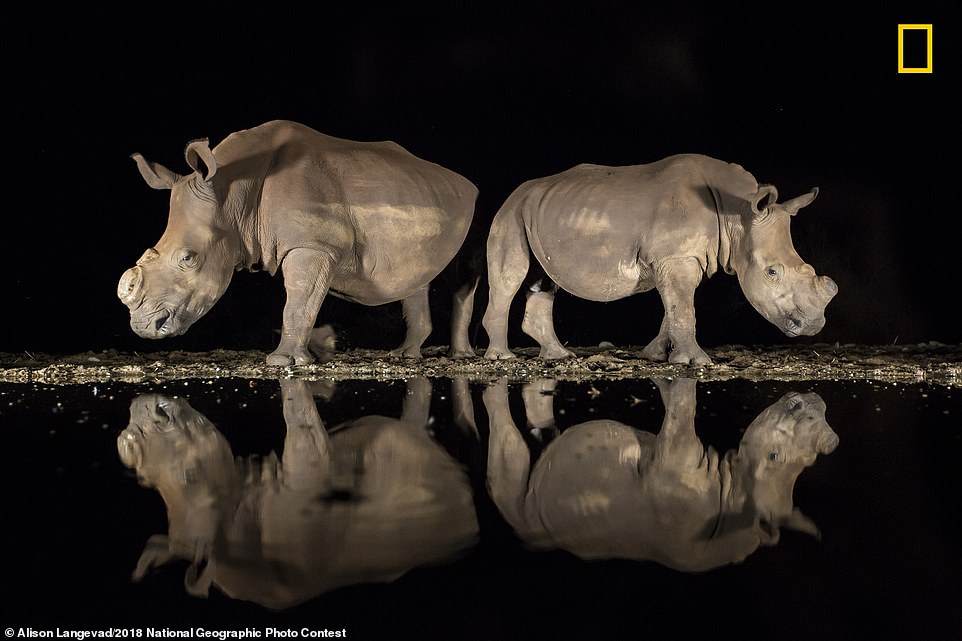 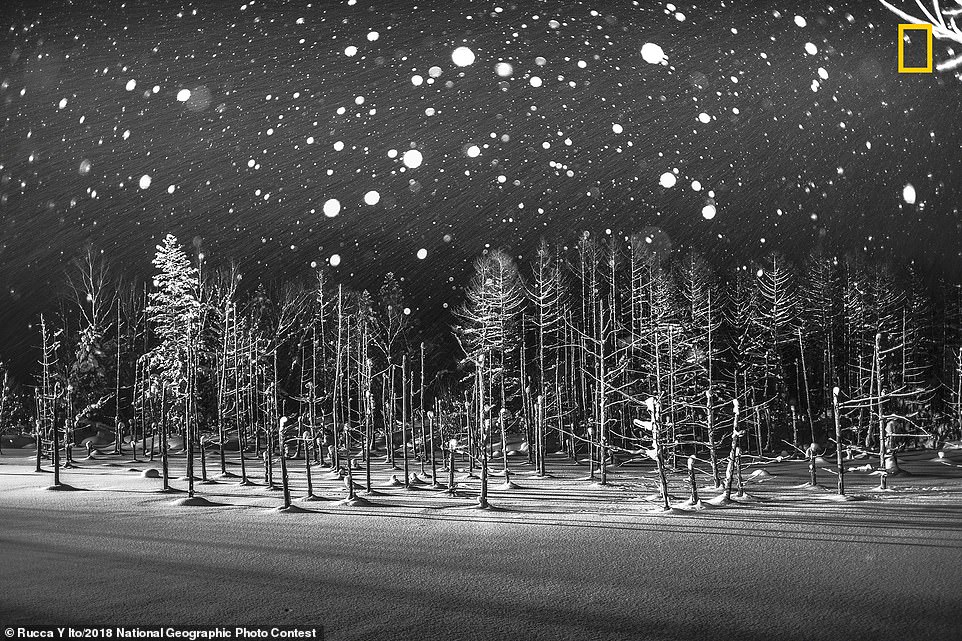 Rucca Y Ito got an honorable mention for this photo of Japan’s Blue Pond in Biei-cho, Hokkaido