The Royal Mint has launched a new £5 coin to commemorate the 150th anniversary of the British Red Cross.

The coin, designed by Henry Gray, celebrates the organisation’s work in the UK and globally as part of the international Red Cross movement and features overlapping lines and a map of the UK.

An inscription around the coin reads ‘per humanitatem ad pacem’ which translates to ‘through humanity to peace’.

A total of 150 of the coins are being handed out to volunteers and staff at the Red Cross nominated by their colleagues as a mark of thanks for their work and time. 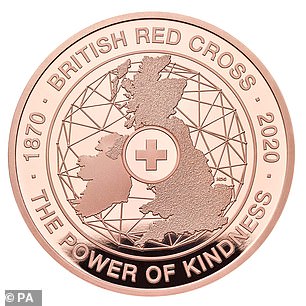 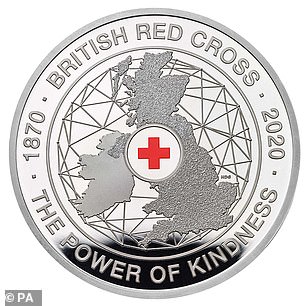 Undated handout photo issued by the Royal Mint of the Gold (left) and Silver (right) Proof edition of their commemorative £5 coin to celebrate 150 years since the formation of the British Red Cross and to support their vital work, helping some of the most vulnerable people in the UK and overseas

Sandra Fisher from Newport south Wales has been volunteering for 27 years and will receive a coin after contributing to the charity’s coronavirus effort from home while isolating.

Ms Fisher said she feels ‘very honoured and privileged to be recognised in this way’ and added: ‘I’ve always tried to do everything I can to help people.’

The charity’s boss said the organisation was ‘honoured’ by the commemoration and paid tribute to staff and volunteers.

Chief executive Mike Adamson said: ‘Today our staff and volunteers are putting kindness in action at the frontline of the Covid-19 pandemic.

‘We have been supporting the most vulnerable by delivering food and medicine, making sure refugees and people seeking asylum are safe, providing a supportive ear through our national support line and helping the NHS to get patients home from hospital.’ 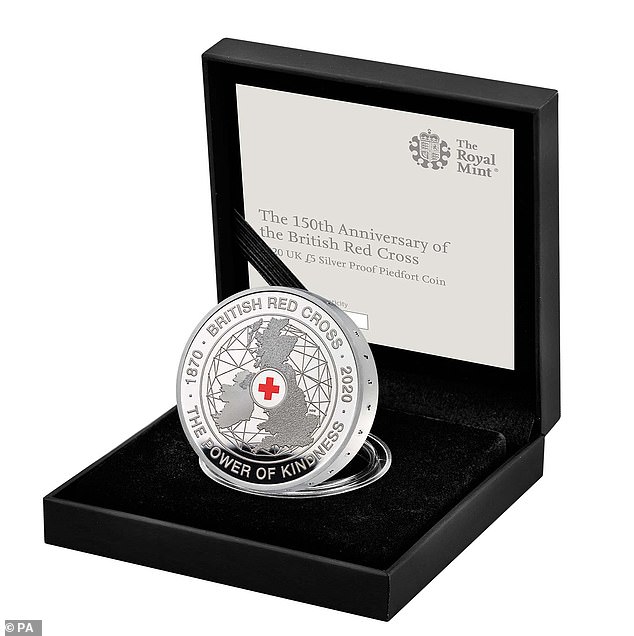 Pictured: The gold issue of the Royal Mint’s commemorative £5 coin to celebrate 150 years of the Red Cross

He added: ‘From then to now, it’s all down to the dedication of our volunteers, staff and the generosity of our supporters that we can continue our lifesaving work.

‘And it is the power of their kindness that will ensure we are there for those who need us most for many years to come.’

The British Red cross respond in both domestic and international crises, and have provided support during the ongoing coronavirus pandemic, and responded to incidents such as the Grenfell Tower fire and tsunami in the Indian Ocean on Boxing Day 2004.