Denmark has passed a law requiring any new citizens to shake hands at their naturalization ceremony.

Critics say the new legislation targets Muslims, who may be reluctant to touch members of the opposite sex for religious reasons.

Some of the mayors who are expected to take part in the ceremonies have complained that the new law signed on Thursday uses them against the populace.

Denmark brought in a face veil ban on August 1 which drew massive protests from Muslim women and human rights groups. 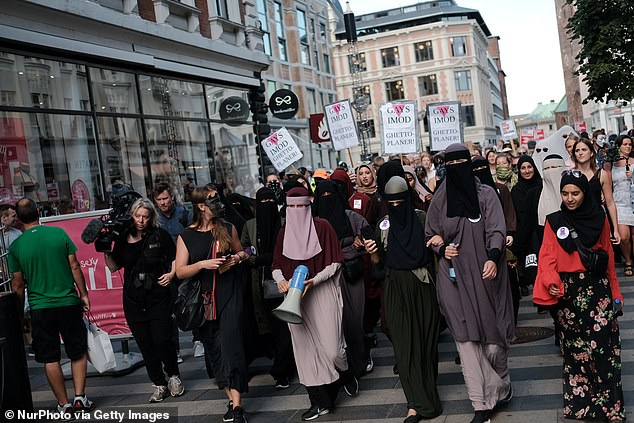 Thousands of people protested in Aarhus, Denmark over the summer in defiance of the Danish Government’s face veil ban brought in on August 1 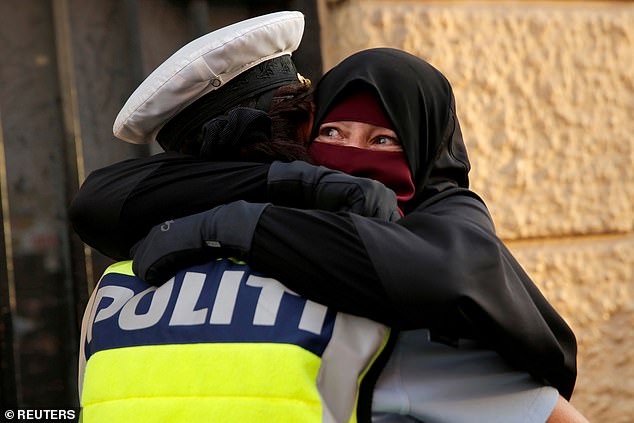 A wearer of the niqab weeps as she is embraced by a police officer during a demonstration against the Danish face veil ban in Copenhagen, Denmark on August 1

It was decided over the summer that new citizens should take part in a ceremony where they sign a declaration pledging their belief in Danish values.

The new law means that as part of the ceremony a new citizen will have to shake hands with an official.

A right-wing Danish lawmaker, Martin Henriksen told the New York Times: ‘If you arrive in Denmark, where it’s custom to shake hands when you greet, if you don’t do it it’s disrespectful.’

The People’s Party spokesman on immigration continued: ‘If one can’t do something that simple and straightforward, there’s no reason to become a Danish citizen.’

He previously told the Eskra Bladet tabloid that shaking hands ‘must simply be a demand.’

As well as Muslims the law could also impact other religious groups who abstain from or for whom it is forbidden to touch members of the opposite sex. 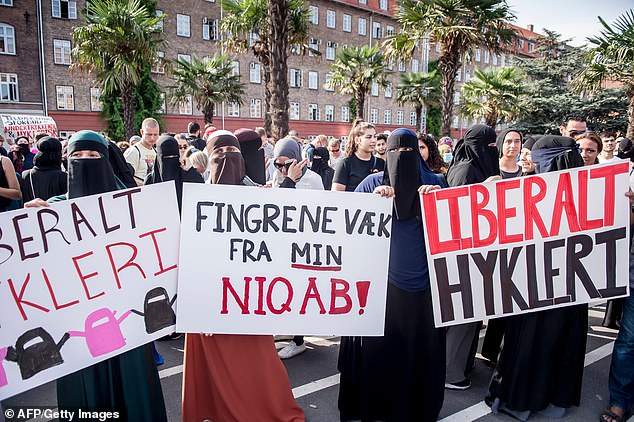 Women wearing niqab demonstrate on the first day of the implementation of the Danish face veil ban, in Copenhagen on August 1 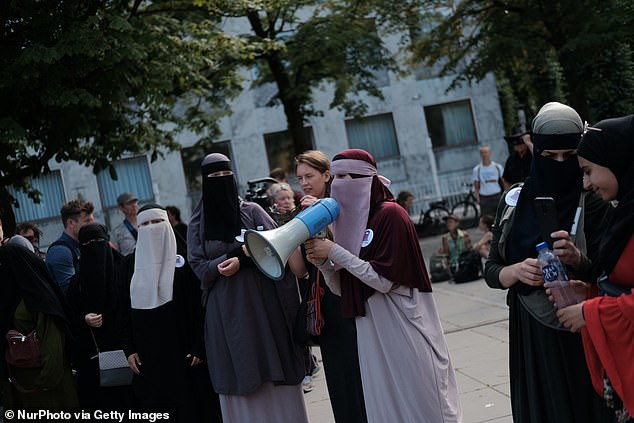 Thousands of people protested in Aarhus, Denmark this summer after the government imposed their face veil ban

Mayor of Aabenraa, Thomas Andresen, told the Times: ‘It’s against my ideology and conviction to have to force other people to have body contact.’

He said he would look to have members of both sexes present at ceremonies to avoid any of the naturalization ceremonies being interfered with by the legislation.

The legislation would not be unique in Europe.

In Switzerland this summer the Guardian reported a couple were refused citizenship by officials in Lausanne after they refused to shake hands with members of the opposite sex.

Lausanne mayor Gregoire Junod cited their lack of respect for gender equality when they were denied citizenship.

Denmark’s cabinet is made up of a minority coalition of center-right parties and they rely on support from the Danish People’s Party, widely viewed as right-wing and populist.