BRUSSELS (Reuters) – The European Union must lead the fight against climate change, build ties with the United States and Africa and face up to a more assertive China, the incoming chief of the EU executive said on Tuesday.

Ursula von der Leyen gave jobs to her 27-strong team, laying heavy stress on a “Green Deal”, technological threats and opportunities and a need to respond to unease among many Europeans about changes ahead to their way of life.

Her “college” of commissioners will take office on Nov. 1, assuming they secure approval from the European Parliament – not a given after it only narrowly backed the German in July.

Greens lawmakers have already expressed concern that her commissioners include Hungary’s ex-justice minister, who they say has undermined the rule of law there.

Von der Leyen’s team will succeed that of Jean-Claude Juncker, who faced the aftermath of the sovereign debt crisis, a migration crisis, Britain’s vote to leave the bloc and a more protectionist United States under President Donald Trump.

Juncker dubbed his team the “political” commission. Von der Leyen said hers would be “geopolitical”, implying that the EU should play a greater role in world affairs.

Announcing the key roles in her line-up, she said Denmark’s Margrethe Vestager would remain in charge of competition policy and Irishman Phil Hogan would take on trade.

Von der Leyen will become the first woman to head the European Commission after promising a platform of a greener, fairer and rule-based Europe.

Her proposed team offers rough gender balance, a plus point for EU lawmakers, with 13 women and 14 men.

“We will take bold action against climate change, build our partnership with the United States, define our relations with a more self-assertive China and be a reliable neighbor, for example to Africa,” she said.

The European Union would be the “guardian of multilateralism”, she said, recognizing that some tasks could not be achieved by Europe alone.

The bloc should be a bigger player in artificial intelligence and big data and improve its defense against cyber attacks.

Holding the influential competition portfolio for the past five years, Vestager has fought monopolies and imposed hefty fines on tech giants Apple and Alphabet unit Google.

Competition is seen as a top job, with Germany and France pressing for the bloc to soften its anti-monopoly rules to help European industrial champions compete with rivals from China and the United States.

Hogan, currently in charge of agriculture, will face a battle to resolve trade tensions with U.S. President Donald Trump’s administration and will be in charge of establishing future economic relations with Britain after Brexit.

The economic portfolio goes to former Italian Prime Minister Paolo Gentiloni at a time when the continent is struggling with weak growth, a possible recession in Germany, and battles with Italy over budgetary restraint.

The outgoing commission has long tussled with Italy over fiscal rules in past years. The appointment of an Italian leftist to monitor Rome’s compliance with EU budget rules could be seen as a lenient move. 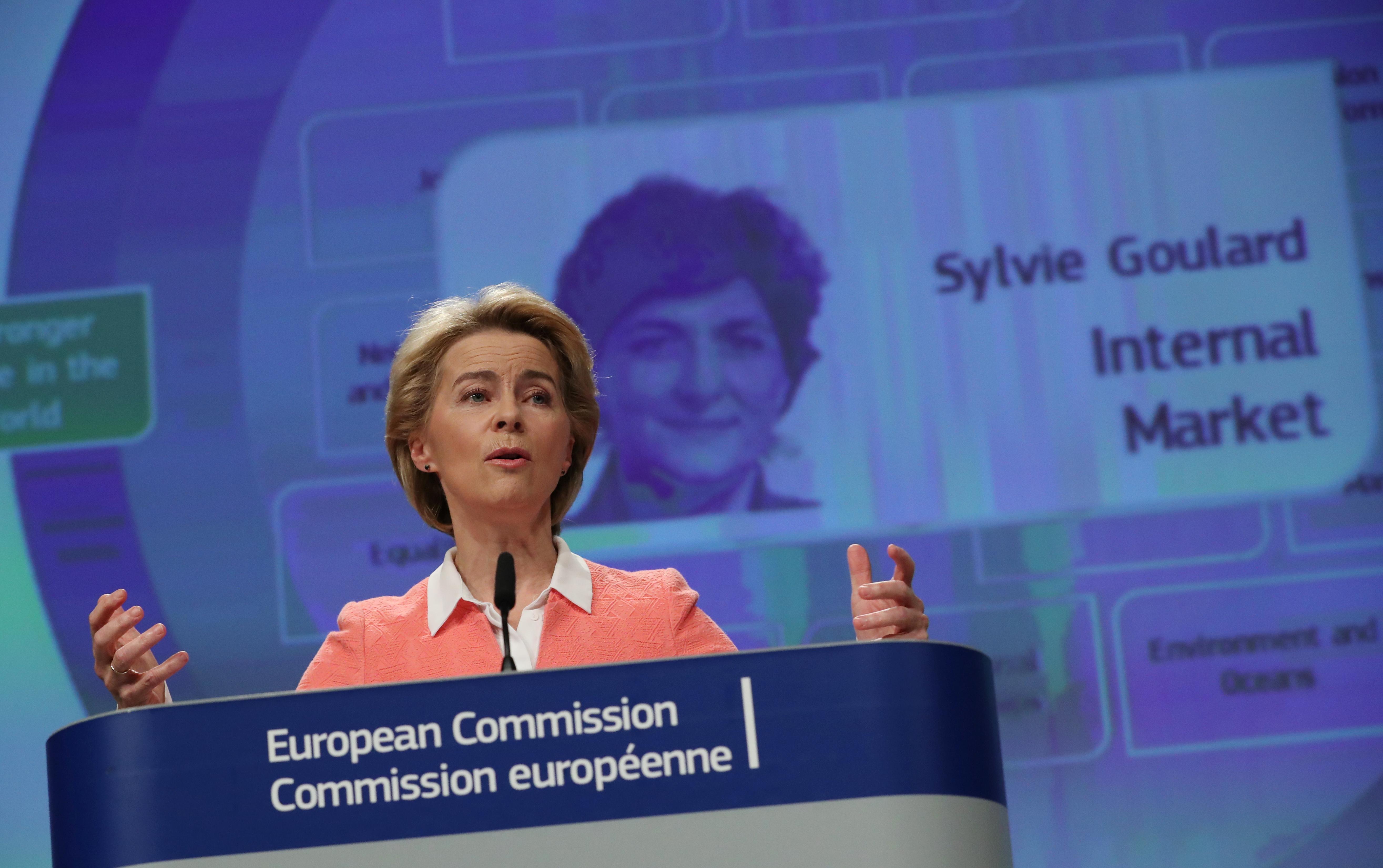 However, Gentiloni will have to agree budget decisions with former Latvian Prime Minister Valdis Dombrovskis, who has a reputation as a tough enforcer of fiscal discipline and will be in charge overall of the Commission’s economic affairs.

In a sign of change from the current executive, the Commission will create a new defense and space arm, under internal markets commissioner Sylvie Goulard, an ally of French President Emmanuel Macron.