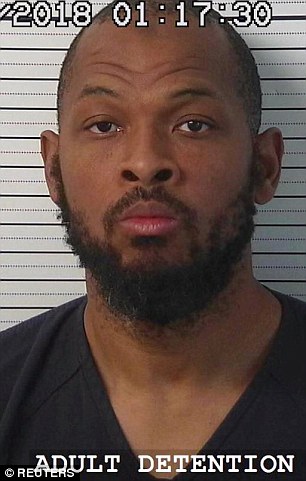 Siraj Wahhaj, 39, was arrested at the compound in Amalia on Friday with his brother-in-law, wife and two sisters

The Muslim extremist father arrested at a New Mexico compound with 11 starving children had been training them to carry out school shootings, new legal documents claim.

Siraj Wahhaj, 39, was arrested at the compound in Amalia on Friday with his brother-in-law, wife and two sisters.

He was heavily armed with an AR-15 rifle and four pistols when police stormed the compound to arrest him.

In court documents filed on Wednesday, prosecutors claimed he was using the weapons to train the children to perform mass school shootings.

It is not yet clear if they had set out a specific plan targeting any one school or if the practice was general.

The compound is close to the Colorado border.

The FBI had been watching the compound for months after being led to it in their hunt for three-year-old AG Wahhaj, Siraj’s disabled son who he vanished with in December.

Their explanation for not raiding it is that they did not have a warrant because AG was never physically seen there.

Police now fear the remains of a young boy which were found on the compound this week may be his but they are yet to be formally identified. 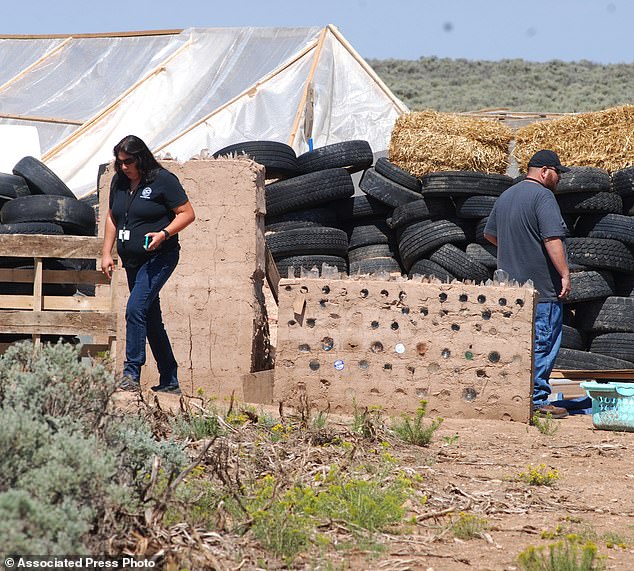 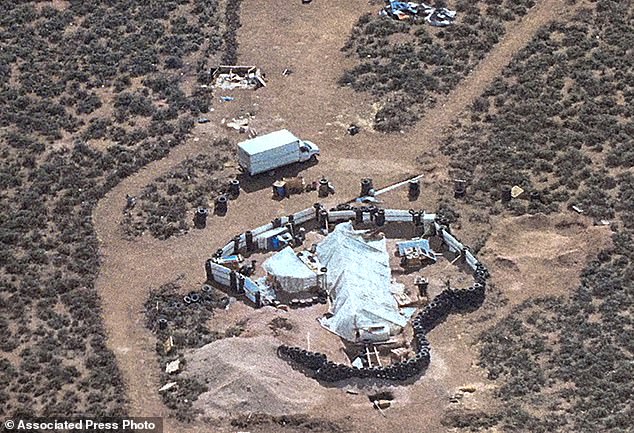 The compound is in the desert in New Mexico. It was put together with trailers and the children had been there for months

Neighbors have told how they heard shooting coming from within the compound over the last few months.

One man who lives nearby says the 11 children initially showed up near his plot of land to play with his kids but that they stopped coming several weeks ago.

Tyler Anderson, is a 41-year-old auto mechanic who lives near the site.

He has told how the Wahhaj family arrived in the desert in December with enough money to buy groceries and construction tools to build their home.

Anderson helped them set up solar panels and the children in the Wahhaj family played with his at first but he started seeing them less and less.

He was aware of a target practice area set up on the compound and said he often heard shots coming from the property but that it stopped recently.

‘We just figured they were doing what we were doing, getting a piece of land and getting off the grid,’ he said.

Lucas Morton, who is married to Subhanah Wahhaj, one of the sisters, owns the tract of land where the family was based and started building their compound. 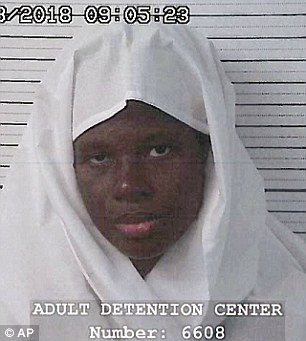 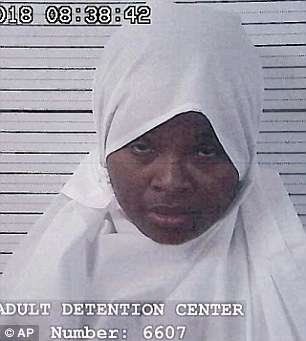 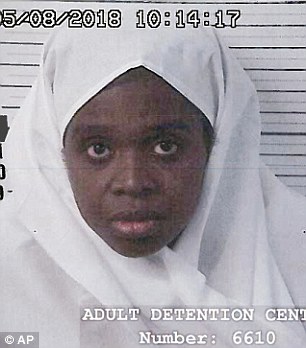 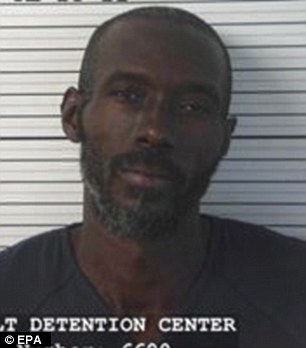 Jany Leveille, who also goes by the name Maryam, was also arrested for child abuse on Sunday. Wahhaj’s brother-in-law, Lucas Morton, (right) was also taken in to custody 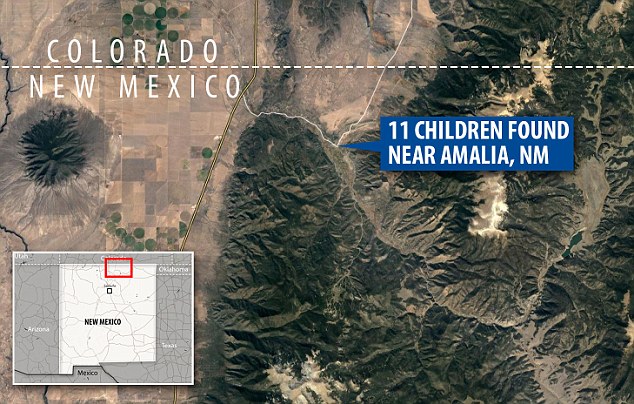 The compound is near Amalia, in the desert of northern New Mexico, is close to the Colorado border

The man who owns the patch next to it, however, says they started encroaching on his acreage as the compound grew bigger.

He appealed to the courts to have them convicted for the breach but nothing was done.

‘I started to try and kick them off about three months ago and everything I tried to do kept getting knocked down,’ he said on Tuesday.

The children were aged between one and 15 and all are related. They were taken into government care on Friday after they were discovered.

They had not eaten in days and were filthy. They escaped after a message from the inside, either written by them or one of their mothers, was intercepted by police. 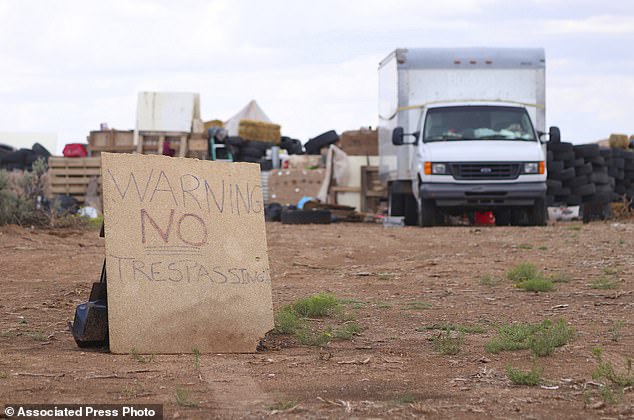 Another photgraph taken at the site on Tuesday as investigators continue working at the scene. Despite landowners’ efforts to remove the family, they remained there for months 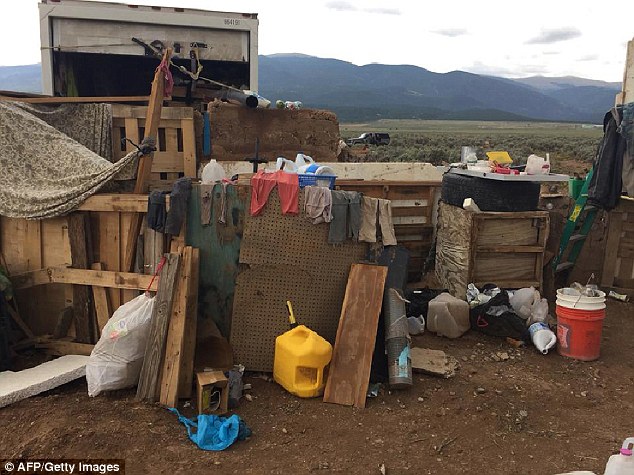 The conditions inside the compound were described by police as the worst they had seen in 30 years after they found the children on Friday. There was no running water or food and the children all had terrible personal hygiene 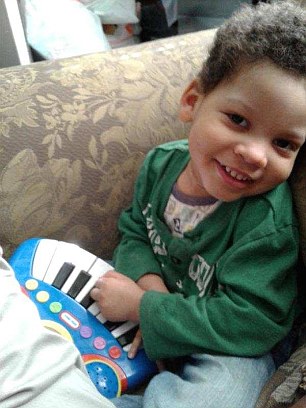 Three-year-old AG, who has  hypoxic ischemic encephalopathy and requires daily medication, has been missing since December and was not found Friday. Remains found at the property are yet to be identified

It said: ‘We are starving and we need food and water.’

The new details were shared on Wednesday as prosecutors pleaded with a judge not to grant Wahhaj bail.

At present, he stands accused of child abduction and neglect.

Police are yet to file charges relating to the discovery of remains of a boy on the compound.

They have also not yet confirmed whether the remains belong to Wahhaj’s disabled three-year-old son AG who he vanished with in December.

At a press conference on Tuesday, Taos County Sheriff Jeffrey Hogrefe fought back tears as he described the grim discovery.

‘We discovered the remains yesterday on Abdul’s fourth birthday,’ he said. 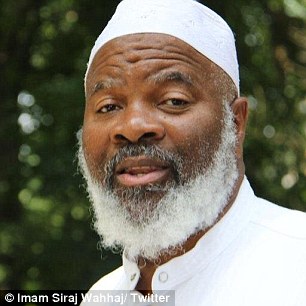 The children’s grandfather is Imam Siraj Wahhaj, the leader of the Muslim Alliance of North America and the leader of a mosque in Brooklyn, New York City

Wahhaj, who is the son of a prominent New York City imam, reportedly planned to perform an exorcism on the toddler who he thought was ‘possessed’.

They went missing from Georgia, where the family lived, in December.

AG’s mother has been pleading for his safe return ever since.

Also arrested at the compound on Friday were the man’s sisters, Hujrah and Subhanah Wahhaj, and his wife, Jany Leveille.

All three women, who police described at first as being ‘brainwashed and intimidated’ by the man, were charged with child abuse on Sunday.

Also charged was Lucas Morton, Subhanah’s husband. He is charged with harboring a fugitive.