It’s a girl! New Zealand PM Jacinda Ardern, 37, gives birth to her first child – the first world leader to have a baby in office in 30 years and only the second ever

New Zealand Prime Minister Jacinda Ardern, 37, has given birth to a baby girl.

Ms Ardern and her partner Clarke Gayford announced the exciting news regarding the birth of their first child on Instagram on Thursday afternoon.

The baby’s name is yet to be revealed, although Ms Ardern has said previously that the couple were struggling to pick one.

‘Welcome to our village wee one,’ Ms Ardern posted on Instagram.

‘Feeling very lucky to have a healthy baby girl that arrived at 4.45pm weighing 3.31kg (7.3lb) Thank you so much for your best wishes and your kindness. We’re all doing really well thanks to the wonderful team at Auckland City Hospital.’ 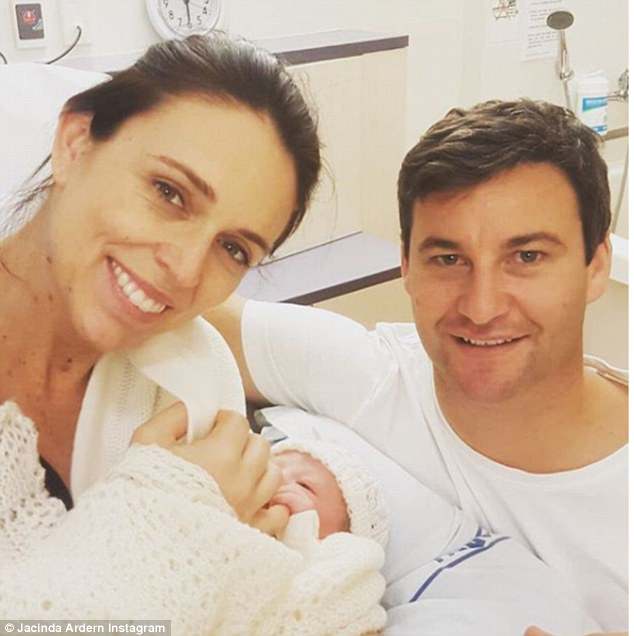 ‘Welcome to our village wee one,’ the New Zealand prime minister posted on Instagram 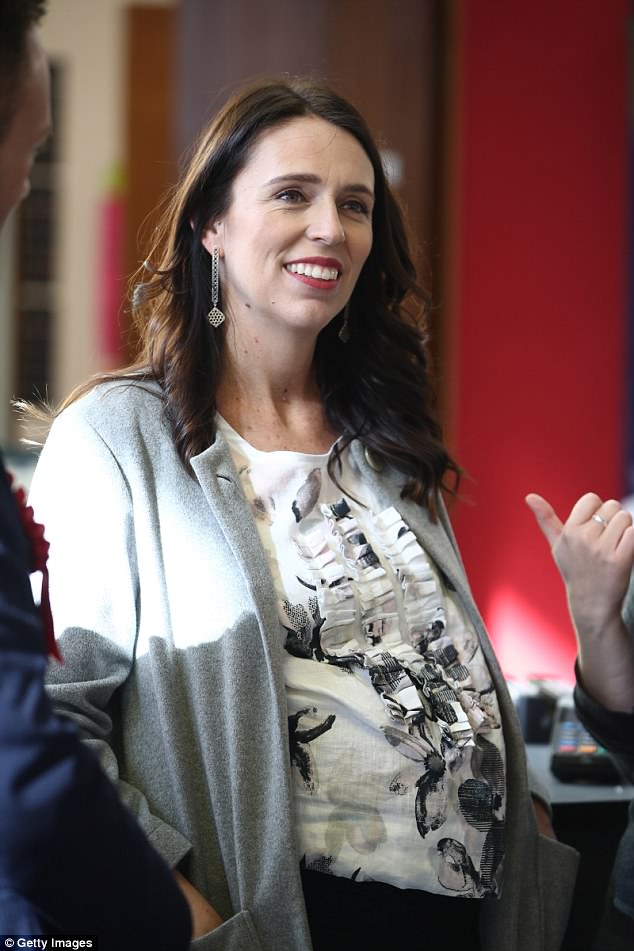 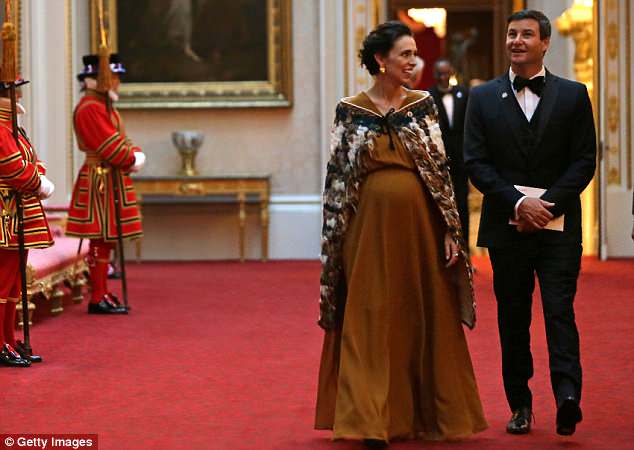 Ms Ardern is the first world leader in nearly 30 years to give birth while in office.

‘I’m sure we’re going through all of the emotions new parents go through, but at the same time feeling so grateful for all the kindness and best wishes from so many people,’ Ms Arden said in a statement.

Her office said it would announce later when the family leave the hospital, who are expected to speak to a crowd of reporters, who have been camped outside the hospital since Ms Ardern arrived there early Thursday morning.

The 37-year-old worked right up until she went into labour on Thursday morning.

The New Zealand Government will be led by Winston Peters, 73, for the next six weeks.

Ms Ardern assured she would still be on call, and the government would be business as usual.

For more than a month, Ms Arden has talked down the significance of her leave, saying she’ll still be receiving briefings and be available for major decisions or to discipline ministers if necessary.

‘The thing to keep in mind is: I’m not dead,’ she told TVNZ.

But while Ms Ardern has been working to assure the nation, Mr Peters has been causing a stir.

He lodged a privacy breach lawsuit against a government department the day Ms Ardern left Wellington, recently scuttled a major piece of Labour policy and has attacked the leadership of the country’s largest company. 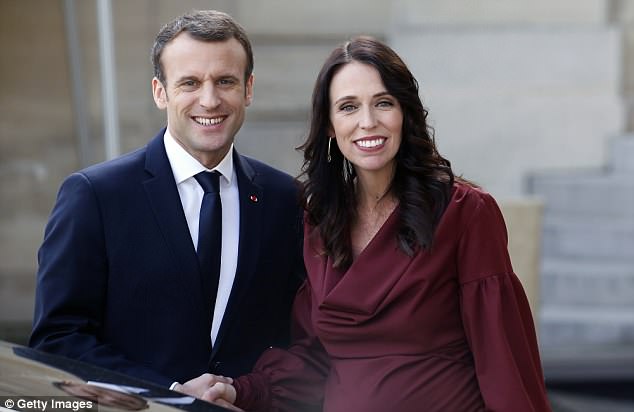 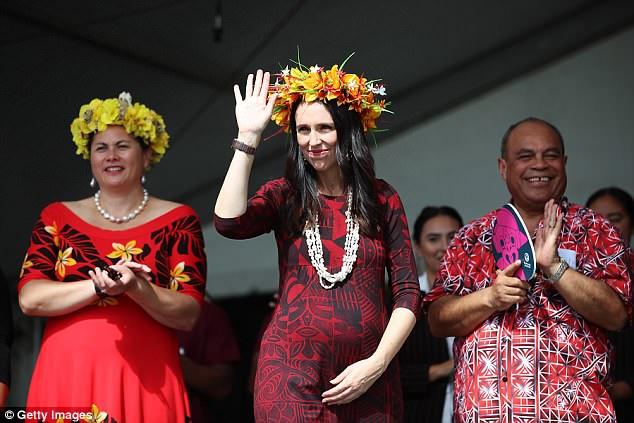 Following the birth, the government will be led by Winston Peters, 73, for six weeks. Ms Ardern (pictured at Polyfest in March) assured she would still be on call, and it would be business as usual

During Ms Ardern’s maternity leave, Mr Peters – the leader of the minority NZ First Party which forms part of New Zealand’s coalition government – will have powers similar to those he would have if the prime minister was overseas.

He will run the day-to-day operations in Wellington and will consult with Ms Ardern on ‘significant political, strategic or public interest, or national security’ matters.

But he’ll still be limited by the decisions of the Labour Party-dominated cabinet.

Recent Newshub-Reid research polling found 39 per cent think Mr Peters will do a good job, the rest were either unsure or pessimistic.

Often described as a populist, Mr Peters is the most experienced hand and one of the most iconic figures in the country’s political landscape – but he is also polarising and has an often combative relationship with the media.

He’s formed coalition governments with both the centre-left and centre-right (playing the role of ‘kingmaker’ to leverage concessions out of the major parties), and since entering parliament in 1979 has held numerous senior cabinet posts, including deputy PM in the 1990s . 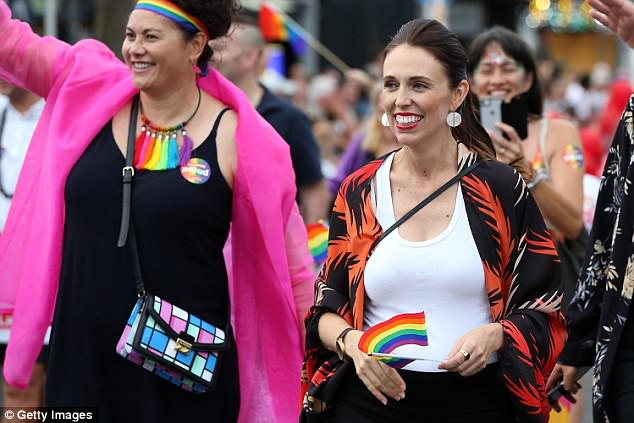 New Zealand Prime Minister Jacinda Ardern (C) is the first PM to walk in the Pride Parade on February 17, 2018 in Auckland

But while he and Ms Ardern’s Labour Party may not have seen eye-to-eye on some issues recently, they’ve been talking up the trust between them.

‘I’ve almost found it surprising people have questioned that it will be anything other than business as usual for us,’ Ms Ardern said.

She became a mother just months after she took the country’s top job in October. 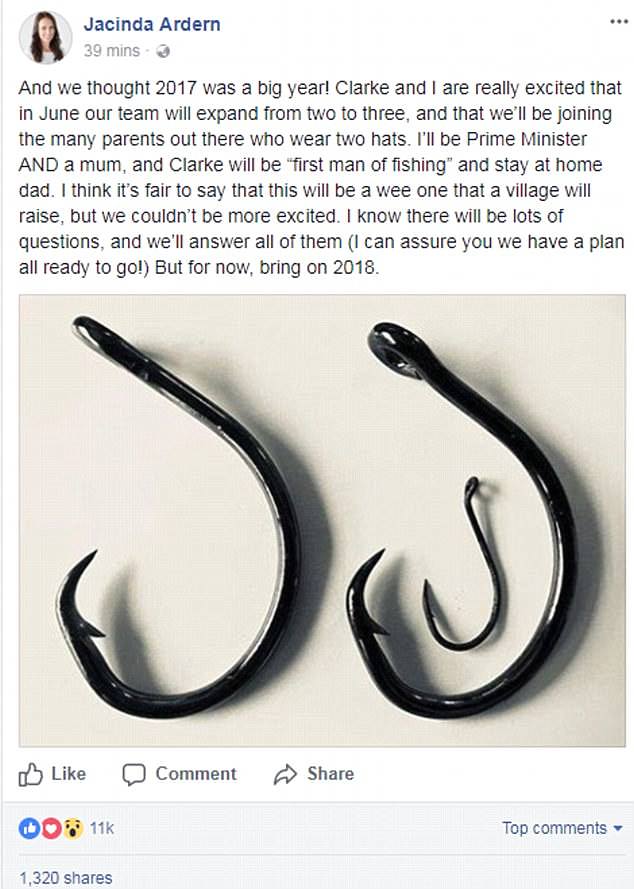 ‘I’ll be Prime Minister AND a mum, and Clarke will be ‘first man of fishing’ and stay-at-home dad,’ she wrote on Facebook

‘I’ll be Prime Minister AND a mum, and Clarke will be ‘first man of fishing’ and stay-at-home dad,’ she said at the time.

‘I think it’s fair to say that this will be a wee one that a village will raise but we couldn’t be more excited.’

Ardern follows in the footsteps of the late Pakistan prime minister Benazir Bhutto, who in 1990 became the only democratically-elected female world leader in recorded history to give birth while in power.