New Zealand reported its first coronavirus death in more than six months on Saturday, while the number of new cases continued to trend downward.

Health authorities said the woman who died was in her 90s and had underlying health problems.

Authorities reported 20 new community cases, all in the largest city of Auckland.

New Zealand remains in lockdown as it tries to eliminate an outbreak of the delta variant that began last month.

New cases in the outbreak have steadily fallen from a peak of more than 80 each day. New Zealand has so far escaped the worst of the pandemic and has reported just 27 coronavirus deaths since it began.

Spain is tweaking its travel entry rules from next week to require vaccination certificates from U.S. tourists, adjusting to recent European Union advice on stricter rules due to growing anxiety over coronavirus contagion in the U.S.

The European Council’s decision earlier this week to remove the U.S. from a safe list of countries for nonessential travel also came amid unanswered calls from European officials for “reciprocity” in travel rules. Despite the EU’s move to open its borders to U.S. citizens in June, the U.S. didn’t allow EU tourists in.

Spain, a major tourism destination, is among a handful of EU countries that has announced steps to adjust its entry rules to the Council’s recommendation.

Under the rules, U.S. tourists will no longer be admitted from Monday, Sept. 6, unless they can show proof of being fully vaccinated at least 14 days before their trip. Unvaccinated children under 12 traveling with vaccinated adults are also allowed in the country.

Hospitals in the heart of California’s Central Valley are running out of beds in their intensive care units because of an influx of coronavirus patients.

State officials announced Friday that hospitals in the 12-county San Joaquin Valley region have had fewer than 10% of staffed adult ICU beds for three consecutive days.

The news triggered special rules that require nearby hospitals to accept transfer patients.

California is averaging 27.9 newly confirmed cases per 100,000 people, down from 33.1 last month. But hospitalizations have continued to increase, with 8,766 patients.

As hospitalizations, deaths and COVID-19 case numbers continue to climb in Tennessee, health experts on Friday pleaded with the public to get vaccinated and continue to wear a mask.

In a letter distributed by the Tennessee Hospital Association, a group of chief officers and chief nursing officers stressed that the latest surge of the virus outbreak is taking a deep toll on the state’s frontline workers and wreaking havoc on families who have lost loved ones to the virus. 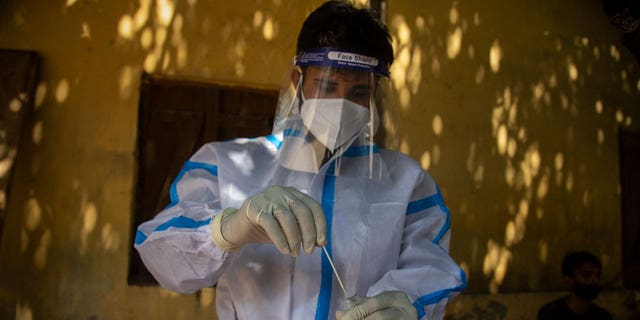 Meanwhile, 42.1% of the population is now fully vaccinated against the virus.

Gov. Bill Lee told reporters earlier this week that the vaccine was the key tool to overcoming the outbreak. But he said he had “no plans” to change the state’s current pandemic mitigation strategy.

Parents of disabled students have filed a federal lawsuit seeking to strike down Iowa’s law banning schools from requiring masks, arguing it endangers their health and denies equal access to education.

The lawsuit is backed by the American Civil Liberties Union and disability rights organizations. Coronavirus cases and hospitalizations are climbing in Iowa to their highest levels since last winter.

Iowa is averaging about 1,200 confirmed cases per day in the last week, and roughly a quarter of those are among ages 17 and under. About 5% of Iowa patients hospitalized with confirmed COVID-19 infections on Wednesday were age 17 or below.

The problem, health leaders say, is twofold: Nurses are quitting or retiring, exhausted or demoralized by the crisis. Many are leaving for lucrative temporary jobs with traveling-nurse agencies that can pay $5,000 or more a week.

In Texas, more than 6,000 travel nurses have flooded the state to help through a state-supported program. But the same time 19 travel nurses started work at a hospital in the northern part of the state, 20 other nurses there gave notice they’d be leaving for a traveling contract, said Carrie Kroll, a vice president at the Texas Hospital Association.

President Joe Biden’s plan to start delivery of booster shots by Sept. 20 for most Americans who received COVID-19 vaccines is facing complications that could delay the availability for those who received the Moderna vaccine, administration officials said Friday.

Biden announced last month that his administration was preparing to administer boosters to provide more enduring protection against the coronavirus, pending approvals from the Centers for Disease Control and Prevention and the Food and Drug Administration. He recommended boosters eight months after the second shot.

However, those agencies are awaiting critical data before signing off on the third doses, with Moderna’s vaccine increasingly seen as unlikely to make the Sept. 20 date.

According to one official, Moderna produced inadequate data for the FDA and CDC to approve the third dose of its vaccine. The FDA has requested additional data that is likely to delay those boosters into October. Pfizer is further along in the review process, with an FDA panel review on boosters on Sept. 17.

Wisconsin’s $100 reward program for those receiving the COVID-19 vaccine will be extended two weeks until Sept. 19.

Democratic Gov. Tony Evers says extending the incentive will give an opportunity for more people to get vaccinated. The program began Aug. 20 and was originally scheduled to end Monday.

Between Aug. 20 and Sept. 1, more than 65,000 people received their first dose. Evers launched the program amid a spike in cases across the state caused by the more infectious delta variant. The level of new cases and hospitalizations are at a level not seen since January. 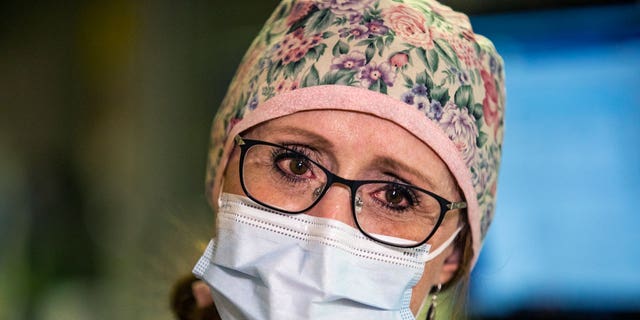 Kristen Connelly, R.N. of the Surgical intensive care unit (SICU) at St. Luke’s Boise Medical Center in Boise, Idaho holds back tears as she talks about the pressure of dealing with the influx of patients to the hospital because of COVID-19 on Tuesday, Aug. 31, 2021. (AP Photo/Kyle Green)
(AP Photo/Kyle Green)

There will be celebrations and somber reflections as American Jews observe the upcoming High Holy Days. There also will be disappointment as rabbis once again cancel or limit in-person worship due to the COVID-19 pandemic.

The chief culprit is the quick-spreading delta variant of the coronavirus. Its surge has dashed widespread hopes that this year’s observances, unlike those of 2020, could once again fill synagogues with congregants worshipping side by side. One rabbi in Florida has decided to hold only virtual services for the holy days.

Other synagogues are offering a mix of in-person and virtual offerings. Temple Beth El, in Augusta, Maine, will require masks inside the synagogue. Workers also erected a big tent in the yard for an outdoor service Sept. 7.

Intensive care beds are full of unvaccinated coronavirus patients at a hospital in Boise, Idaho, and doctors are bracing for the need to conserve scarce resources for the patients most likely to survive.

At St. Luke’s Boise Medical Center, the view in every direction is heartbreaking. In one room, a pregnant woman in her second trimester relies on an artificial breathing machine. Down the hall, a nurse cries as she recounts the waves of anger and grief that fill her days.

Idaho is among the nation’s lowest in vaccination rates, and experts warn new infections could number 30,000 a week by mid-September.

On Friday, 71% of those in Italy age 12 and older have been fully vaccinated. The government says it’s confident it will meet its target of having 80% of the eligible population vaccinated by the end of September.

Health Minister Roberto Speranza says the government “wants this number to grow even more” and is weighing whether to extend the Green Pass requirements to other situations. The pass indicates a person has at least one vaccine dose, recovered from COVID-19 in the last six months or tested negative for the illness in the last 48 hours. 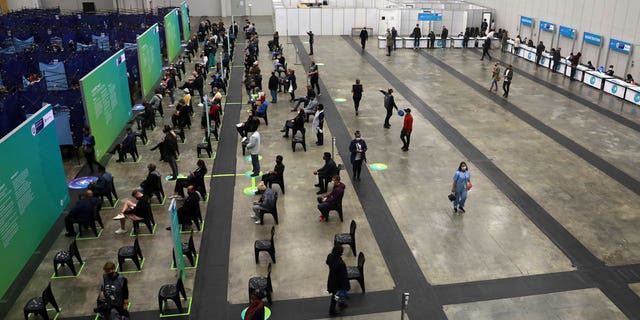 People wait to get vaccinated at the Vaccination Centre of Hope at the Cape Town International Convention Centre in Cape Town, South Africa, Tuesday Aug. 24, 2021. South Africa’s Health Minister Joe Phaahla says on Friday, Sept. 3, 2021 the government will let businesses decide whether or not to make vaccinations mandatory for employees and clients. He said restaurants, bars, grocery stores and other businesses must set their own policies on whether or not to insist that patrons must be vaccinated. (AP Photo/Nardus Engelbrecht)
((AP Photo/Nardus Engelbrecht)

The European Union and drugmaker AstraZeneca say they reached a deal to end a legal battle over the slow deliveries of the company’s COVID-19 vaccines.

The European Commission says AstraZeneca made a “firm commitment” to deliver a total of 300 million vaccine doses by March. The commission says it involves the pharmaceutical company providing 135 million doses by the end of this year plus another 65 million doses in the first quarter of 2022. Around 100 million have already been supplied.

The EU accused AstraZeneca of acting in bad faith by providing shots to other countries, notably former EU member Britain. It argued the company should have used its production sites in the U.K. to help fill the EU’s order.

AstraZeneca says, along with its partners, it has supplied more than 1.1 billion doses of vaccine to more than 170 countries and approximately two-thirds have gone to lower-income countries.

Children across Europe are going back to school after 18 months of pandemic disruption.

But in many countries, there are concerns of a new surge in infections from the highly infectious delta variant of the coronavirus.

Unlike the U.K., Italy and Spain are maintaining social distancing and masks for students and staff. Italy also requires teachers to show proof of vaccination or a recent negative coronavirus test, along with Turkey and Greece.

In France, where students headed back to school Thursday, face masks must be worn by pupils 6 and up.

Britain, which lifted nearly all pandemic restrictions on business and socializing in July, has among the highest coronavirus rates in Europe, with upward of 30,000 new cases each day. Hospitalizations and deaths remain far lower than during previous surges, thanks to an inoculation campaign that has seen nearly 80% of people over 16 fully vaccinated.