A major NHS drive to treat patients at home rather than in hospital has failed, a report warns to today.

The controversial policy has led to a huge drop in hospital beds on the premise that patients wouldn’t need to stay in them as long.

Instead, patients are meant to be looked after in their own homes by teams of district nurses, GPs, physiotherapists and social workers.

But an analysis by NHS Providers – which represents hospitals and community health services – has concluded that the policy has ‘fallen flat.’

Half of the community health trusts – which provide care closer to home – are cutting costs and another third are shedding staff.

Patients – mostly the elderly – are ‘paying the price’ for these failings, the report warns. 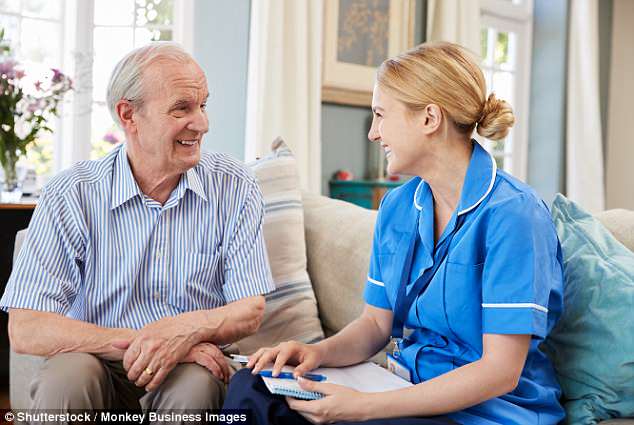 The major NHS drive to treat patients at home rather than in hospital has failed, according to analysis by NHS Providers (file photo)

Many are suffering falls, becoming dehydrated or succumbing to infections because they are not being properly looked after at home.

Sadly, the cutbacks are affecting the terminal ill who are not able to die at home due to a lack of staff to provide end-of-life care.

This all results in more patients being admitted to hospital which become increasingly overcrowded, particularly as there are now fewer beds.

And many patients have to stay in hospital after they have been declared medically fit for discharge due to a lack of community services able to look after them at home.

The drive to treat patients at home rather than in hospital began in the early 2000s and has since been referred to ‘moving care closer to home’.

But it resulted in hospitals slashing beds and mothballing wards in the belief that they would be treating fewer patients.

Chris Hopson, chief executive of NHS Providers, said the community services which were meant to be looking after patients at home had become ‘marginalised, underfunded and short-staffed.’

‘It is patients who are paying the price for the failure to follow through on past commitments as the rest of the health and care system struggles to keep up with rising demand for treatment.

The report includes a survey of 51 NHS trusts which provide community services of whom 52 per cent said funding had fallen in their area in the last year.

Matthew Winn, chief executive of Cambridgeshire Community Services NHS trust said: ‘The pressures facing hospitals are tangible and widely reported, but the steep rise in demand, coupled with the complex needs of people living at home are largely ignored and hidden.

‘This report shines a clear light on a sector that needs greater support and national leadership to help realise the ambitions of supporting more people to be cared for safely at home.’

Siobhan Melia, chief executive of Sussex Community NHS foundation trust said: ‘We see the impact of funding and workforce pressures every day and there are particular challenges for staff working in the community.

‘They need access to support and supervision, as well as training opportunities to ensure that they can continue to deal with the most complex of cases and keep people safe in their own homes.’

An NHS spokesman said: ‘This report highlights the inescapable pressure on GPs, hospitals and community services from a growing, aging and sicker population, which will have to be properly factored in to NHS funding decisions for the decade ahead.’